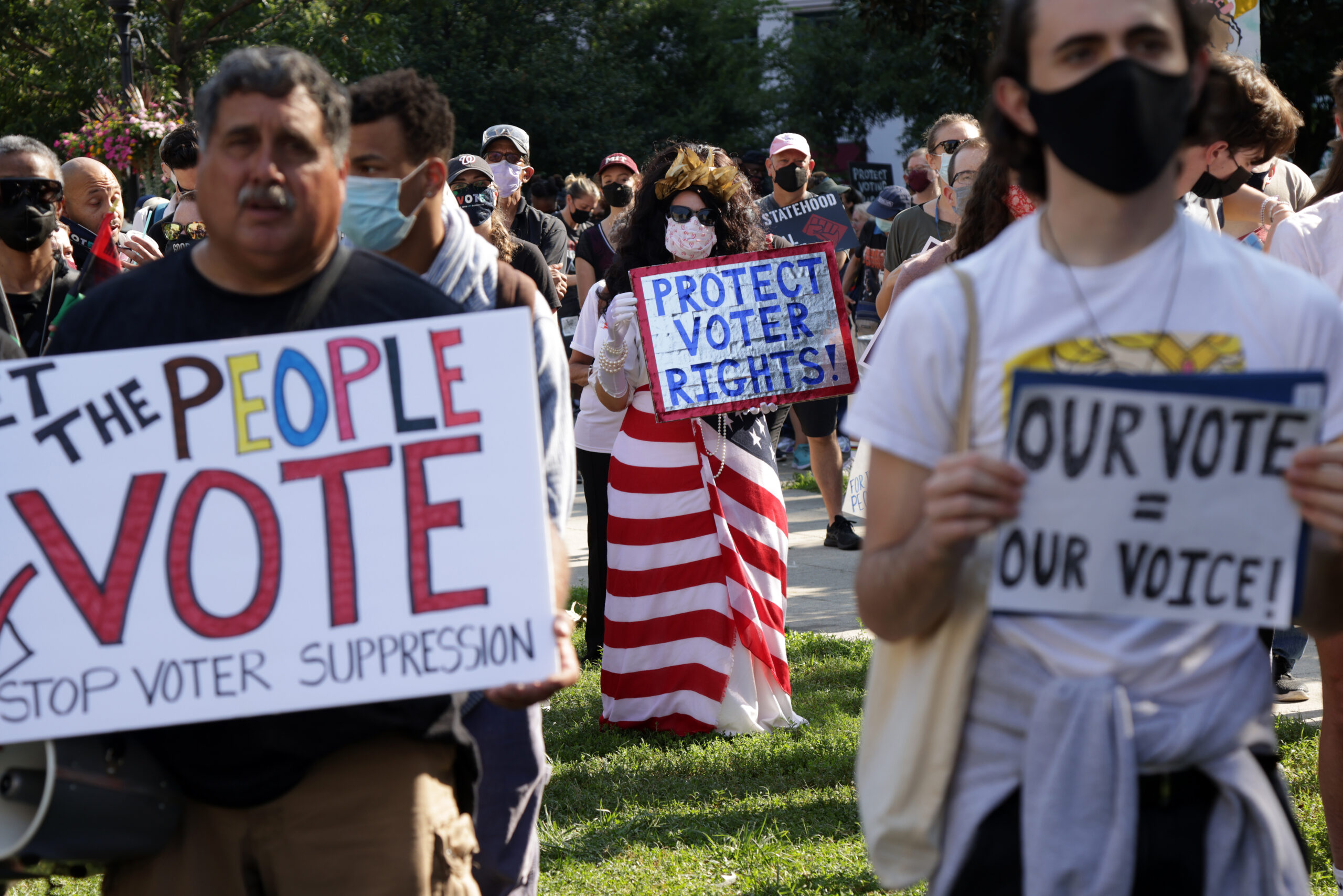 Voting rights advocates demonstrate during a March On For Voting Rights event on Aug. 28 in Washington, D.C. New polling shows voters are more likely to say it's too easy to vote than to say it's too hard, underscoring a messaging challenge for congressional Democrats seeking federal legislation to overhaul the country's elections sytem. (Alex Wong/Getty Images)
By Eli Yokley

Voting rights advocates have used local restrictions passed by Republican state legislatures in the wake of the 2020 election as evidence that suffrage is under attack as they press Democrats in Congress to respond with federal legislation.

But the idea that it is too hard to vote is not the prevailing sentiment among the American people, according to new Morning Consult polling, revealing a messaging problem for Democrats who already face the practical challenge of circumventing a Senate Republican filibuster of their Freedom to Vote Act.

The Sept. 17-20 survey found that 44 percent of U.S. adults believe the rules around voting are not strict enough to prevent votes from being cast illegally, a rarity in modern American elections, compared with 33 percent who say the rules make it too difficult for eligible citizens to cast their ballots.

Share of U.S. adults who said the rules around voting…

State-level legislation in Texas and other red-leaning states have prompted charges of racism from voting rights advocates, who say people of color are disproportionately affected by voter ID requirements and limits on early voting. While Black Americans are more likely to say that difficulties in the voting process are a bigger problem than a lack of restrictions, it’s not a majority position among the group, and Hispanic Americans are divided on the question.

The polling comes after Senate Democrats reached an agreement in September on voting rights legislation crafted by moderate Sen. Joe Manchin (D-W.Va.), who opposed the party’s previous voting and government reform package, the House-passed For the People Act.

Along with revisions to campaign finance — and perhaps most importantly, restrictions on partisan gerrymandering in redistricting — the measure would expand early voting and create an automatic voter registration system, provisions that are popular with the overall electorate, and opposed by Senate Republicans, who are expected to block floor consideration of Manchin’s compromise legislation.

The Senate GOP’s blockade is likely to prompt more calls from the left to eliminate the legislative filibuster. Recent Morning Consult/Politico polling found that 37 percent of Democratic voters say nixing the filibuster should be a “top priority” on Capitol Hill, up 13 percentage points since the beginning of the year but unchanged since early June.

As other pieces of President Joe Biden’s agenda have been blocked by Republicans in the Senate, about a quarter of all voters say Congress should prioritize the elimination of the filibuster.