An IATSE Strike Would Shut Down Most of Hollywood. Americans Support One Anyway 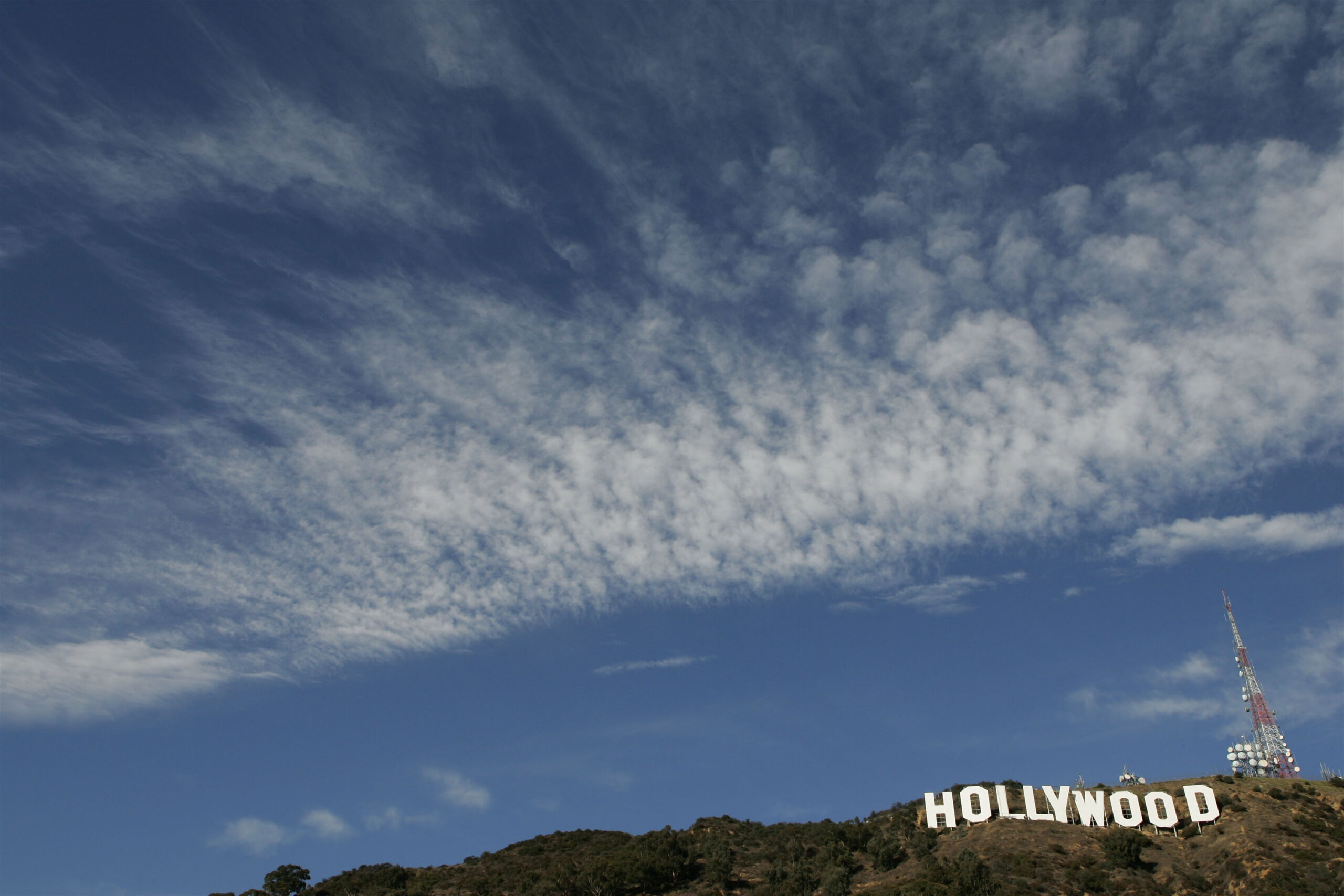 Roughly half of avid TV and film fans said they support IATSE members going on strike, according to new Morning Consult data. The union, which includes 150,000 members, is set to vote on a strike authorization this weekend. (David Livingston/Getty Images)
By Sarah Shevenock

A labor union that represents 150,000 Hollywood workers is readying for a vote to authorize a strike, a move that would have wide-ranging consequences for the U.S. entertainment industry. Ahead of the pivotal decision, Morning Consult data shows a plurality of Americans support the craft workers going on strike, even when armed with the knowledge that it would lead to the shutdown of most film and TV productions.

Forty-six percent of the 2,200 adults polled in the Sept. 27-29 survey said they support members of the International Alliance of Theatrical Stage Employees (IATSE) going on strike, while 17 percent said they opposed a strike. And with more than 90 percent support, self-identified avid film and TV fans were more likely than the public overall to back a potential IATSE members strike. 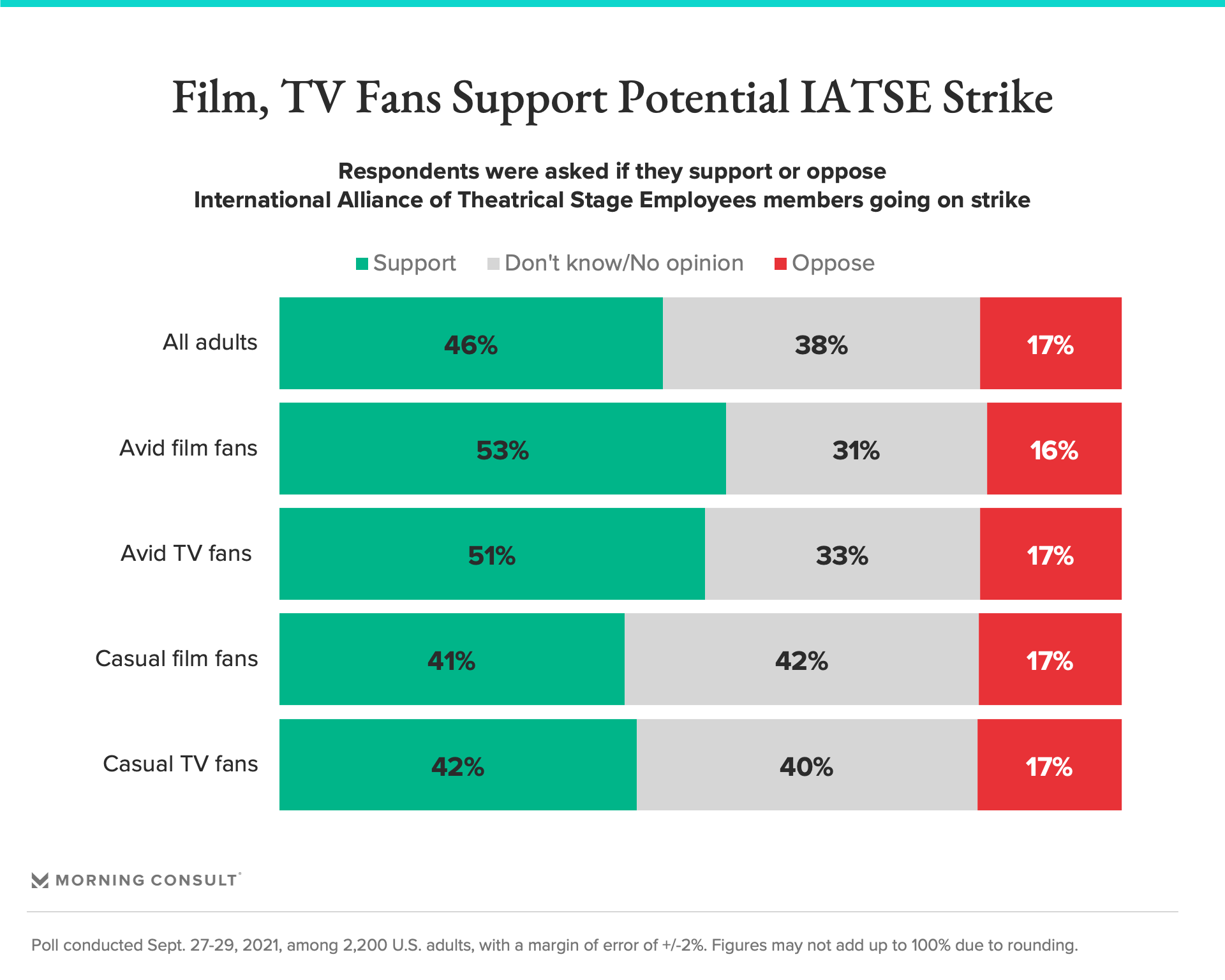 The craft workers, who will vote on a strike authorization this weekend, are asking for expanded rights and compensation, including higher pay, improved working conditions and a larger cut from streaming profits after they failed to reach a new agreement with the Alliance of Motion Picture and Television Producers, the group that represents most film studios, TV networks and streaming companies. IATSE President Matthew Loeb recently said the goal is to still reach an agreement, but that he expects the vote to pass with “overwhelming support.”

Results of the vote are expected to be announced on Monday. A “yes” vote would not necessarily lead to a walkout, but merely authorize union leadership to call for one. In its 128-year history, the group has never gone on strike.

A strike among the union members, which include costume designers, hair and makeup stylists and cinematographers among many other integral jobs on film sets, would result in the shutdown of the majority of Hollywood productions, the subsequent delay of film and TV releases and the loss of untold sums of revenue. Productions from some networks, such as HBO, Showtime, Starz, Cinemax and BET, would be exempt, as their contracts have not expired. 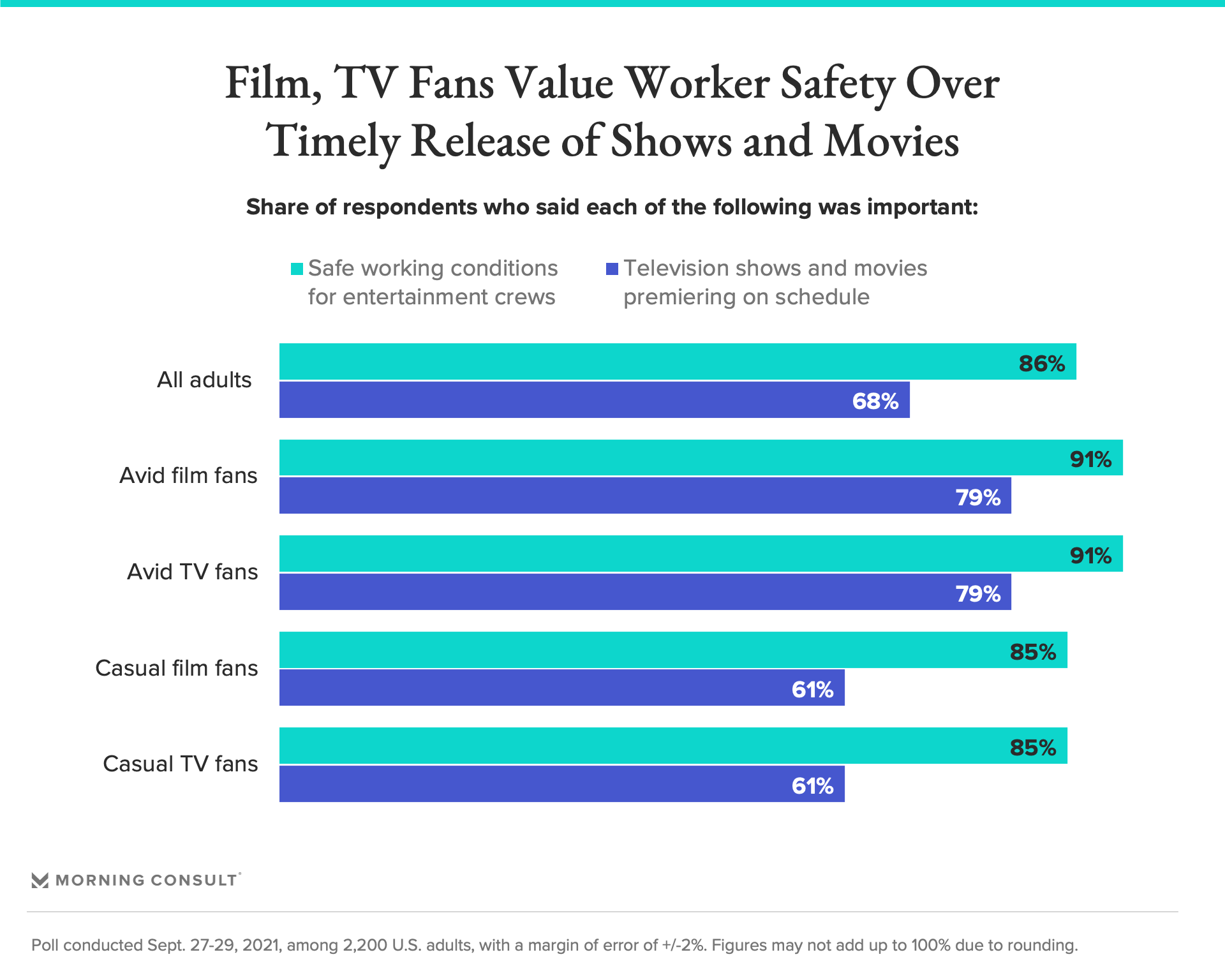 The public is largely more concerned that Hollywood craft workers operate in safe and healthy environments than they are that films and TV shows come out on schedule, according to the survey. Eighty-six percent of respondents said safe and healthy conditions for film and TV workers were important, while 68 percent said the same of entertainment content premiering on time.