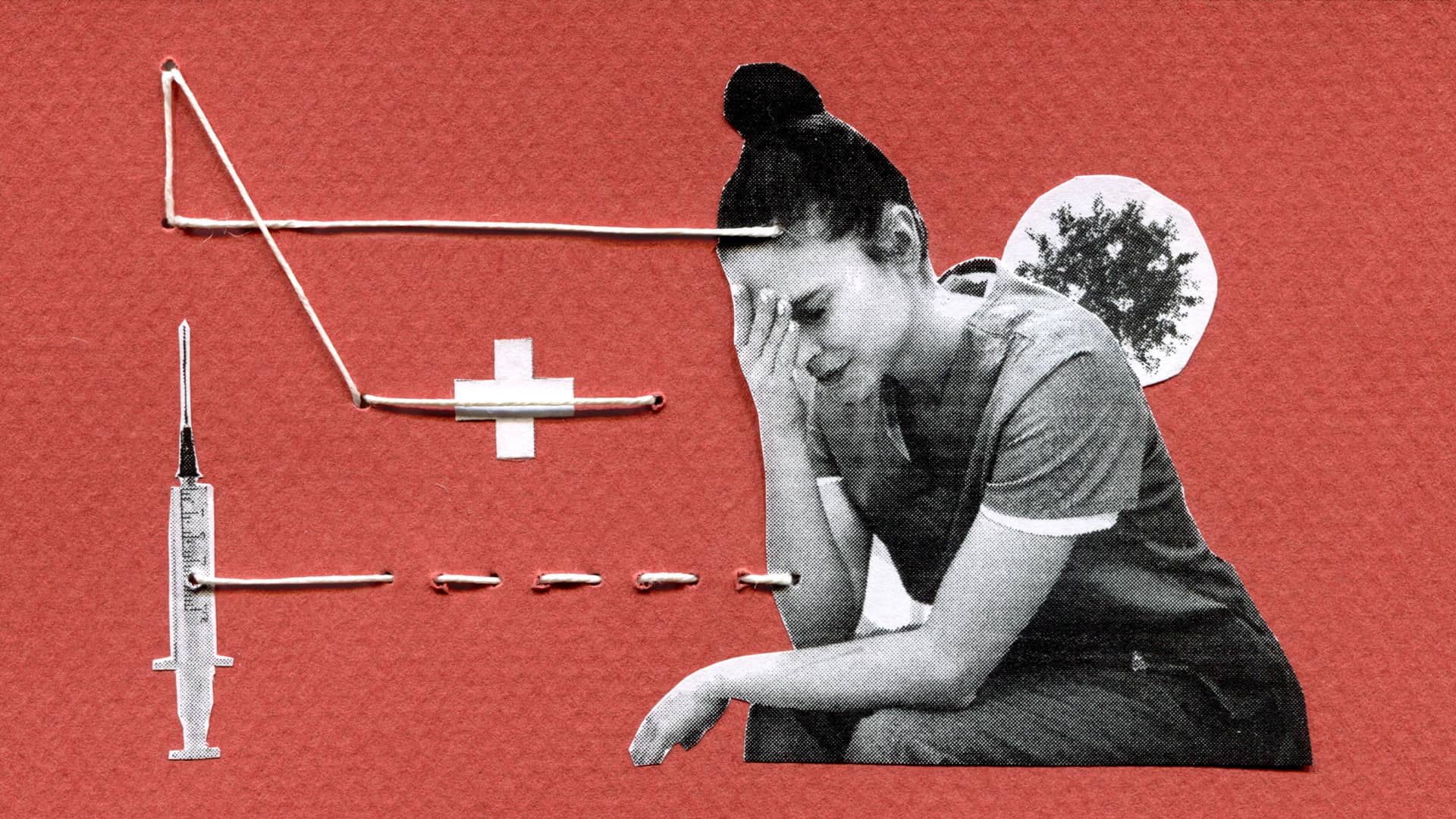 A new special report from Morning Consult explores how health care workers have fared during the pandemic and how they view the future of the medical field. The data is drawn from a poll of 1,000 health care workers and is a follow-up to a January survey and series.

Other stories in the report: Nearly 1 in 5 Health Care Workers Have Quit Their Jobs During the Pandemic | Pandemic, Worker Shortage Pose Major Challenges to Long-Term Care Industry | Health Care Workers’ Message to Future Colleagues: Don’t Join Us Unless ‘You Are Completely Committed to It’

For Dr. Yomna Nassef, the New York City emergency room where she works is far less overwhelming now than in the earliest days of the COVID-19 pandemic. But the weight of the past year and a half still lingers.

“I have never before in my life seen more physicians feel like they’re almost on a sinking ship,” Nassef said. “We’re universally feeling the burnout and feeling the pain right now.”

She’s far from alone. A new Morning Consult poll found that in September, 51 percent of health care workers said their mental health has gotten worse during the pandemic, while 42 percent said their day-to-day lives have gone downhill and 33 percent have said as much about their physical health.

The survey also shows that the pandemic’s toll hasn’t abated since January, when the newfound availability of effective vaccines seemed to indicate that the strain on health systems would soon be lifted. At the time, 46 percent of health care workers said their mental health had suffered, and an equal share said daily life had gotten worse during the pandemic.

Now, medical workers across the country are being thrown back to the fore as the United States faces another crushing wave of COVID-19 hospitalizations. This time, health care workers are burdened with the knowledge that much of the suffering could’ve been prevented.

“The reasons for that burnout have changed multiple times during the pandemic,” said Nassef, also a spokesperson for the American College of Emergency Physicians. “Most recently, it’s a feeling that while things may be better from a vaccination standpoint and from having some treatments for COVID, medicine prior to that was already in trouble.” 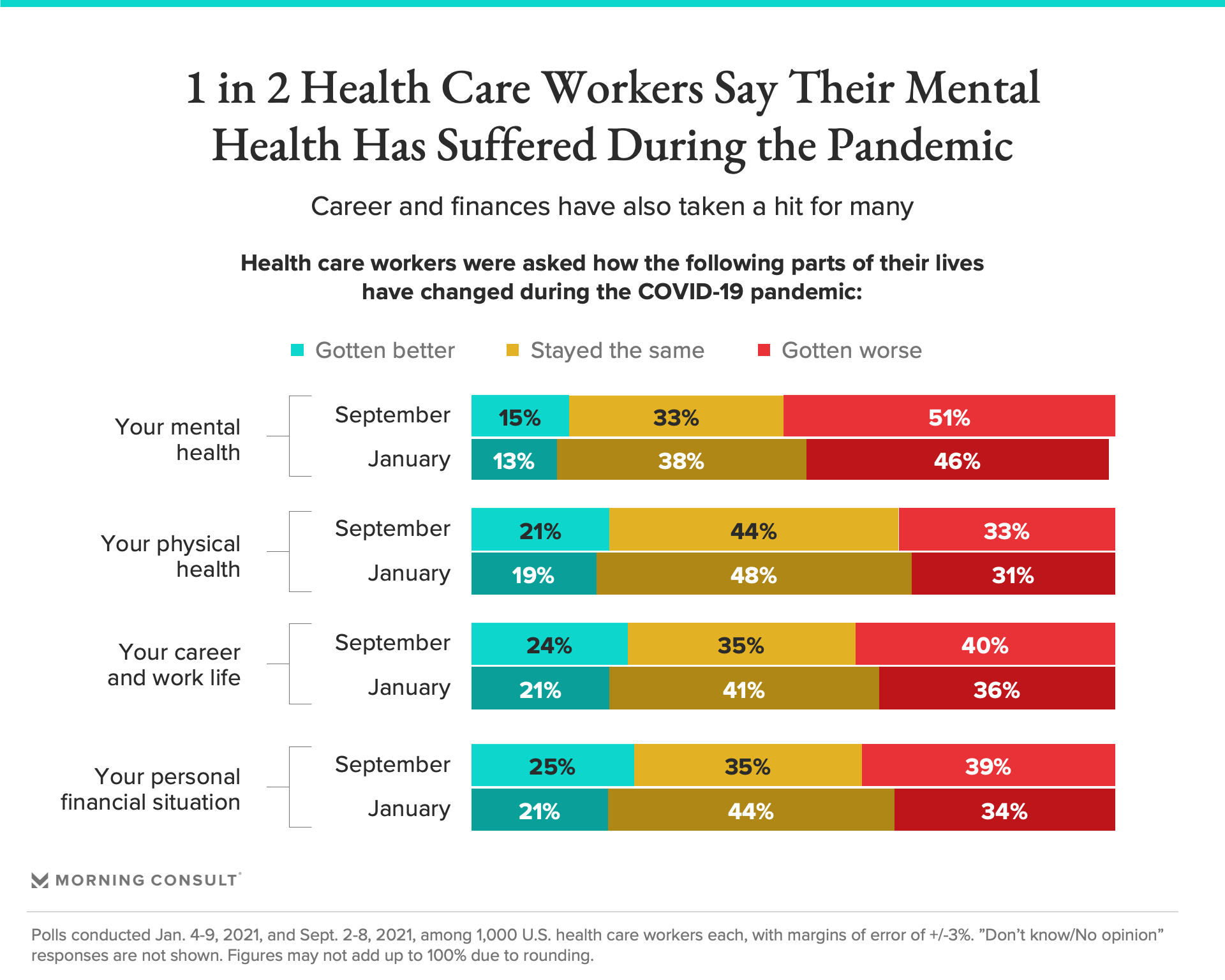 Burnout in health care was a problem long before the coronavirus devastated the United States. But physicians, nurses and health leaders said the pandemic has highlighted the abject failures of U.S. policy, hospitals and other health systems to prevent burnout from creeping in, with serious repercussions for clinicians’ well-being and the medical workforce overall.

“Physicians as a group are significantly more resilient than the general population, so the problem isn’t at the individual level; it’s the environment in which medicine is practiced,” said Dr. Christine Sinsky, vice president of professional satisfaction at the American Medical Association.

The risk that a physician will die by suicide, for example, is more than double that of the U.S. population overall. Nurses are also at higher risk. Nassef and others say that’s partially because of the stigma around mental health issues in medicine, and clinicians’ concerns that seeking help could jeopardize their careers.

Policymakers are looking to change that. In August, the Senate passed bipartisan legislation named for Dr. Lorna Breen, a New York City physician who died by suicide in April 2020, that would establish grants targeting provider mental health and ensure clinicians aren’t “burdened or punished” if they do seek help, Sen. Tim Kaine (D-Va.), the bill’s lead sponsor, said during a press conference last month. 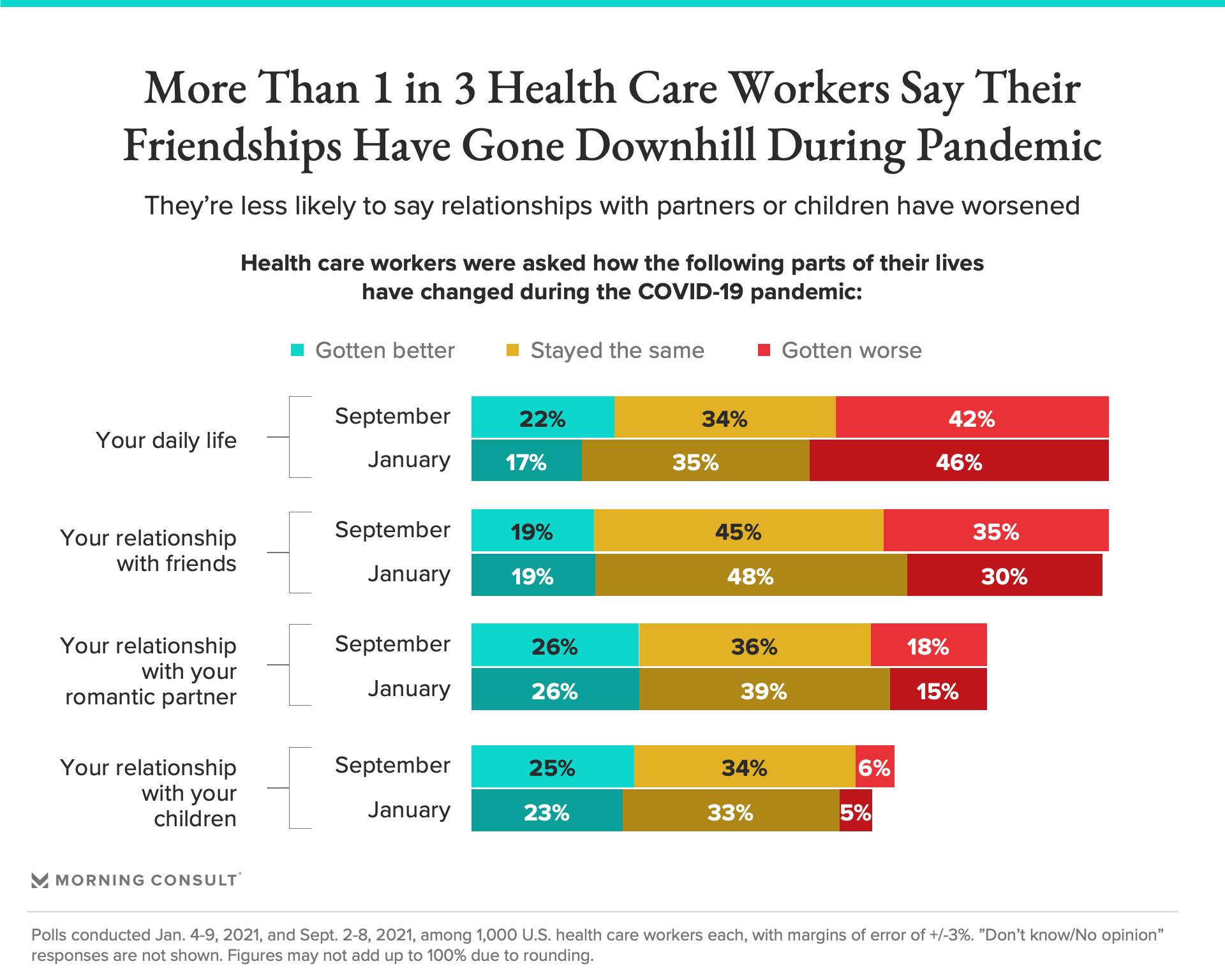 The Biden administration is also taking steps to address the issue, with the Department of Health and Human Services setting aside $103 million in July for programs to reduce burnout among medical workers, including money for hospital wellness programs.

Sinsky said some providers are already taking steps to mitigate burnout, noting that “there is growing awareness that in order to meet the other organizational objectives that they have — financial, quality, growth, etc. — that they need a vibrant workforce that is fully present, that is not despondent or discouraged.”

Burnout isn’t a problem that will be solved overnight, though. In the meantime, those who care for patients or keep medical facilities up and running, like hospital administration and support staff, are continuing to absorb the ever-evolving toll of the pandemic.

“We’ve taken a lot of risks,” Nassef said. “It was really nice when early on in the pandemic, people were clapping for us and we were heroes. But now it almost seems like people are angry at us for wanting them to keep their masks on or get vaccinated.”