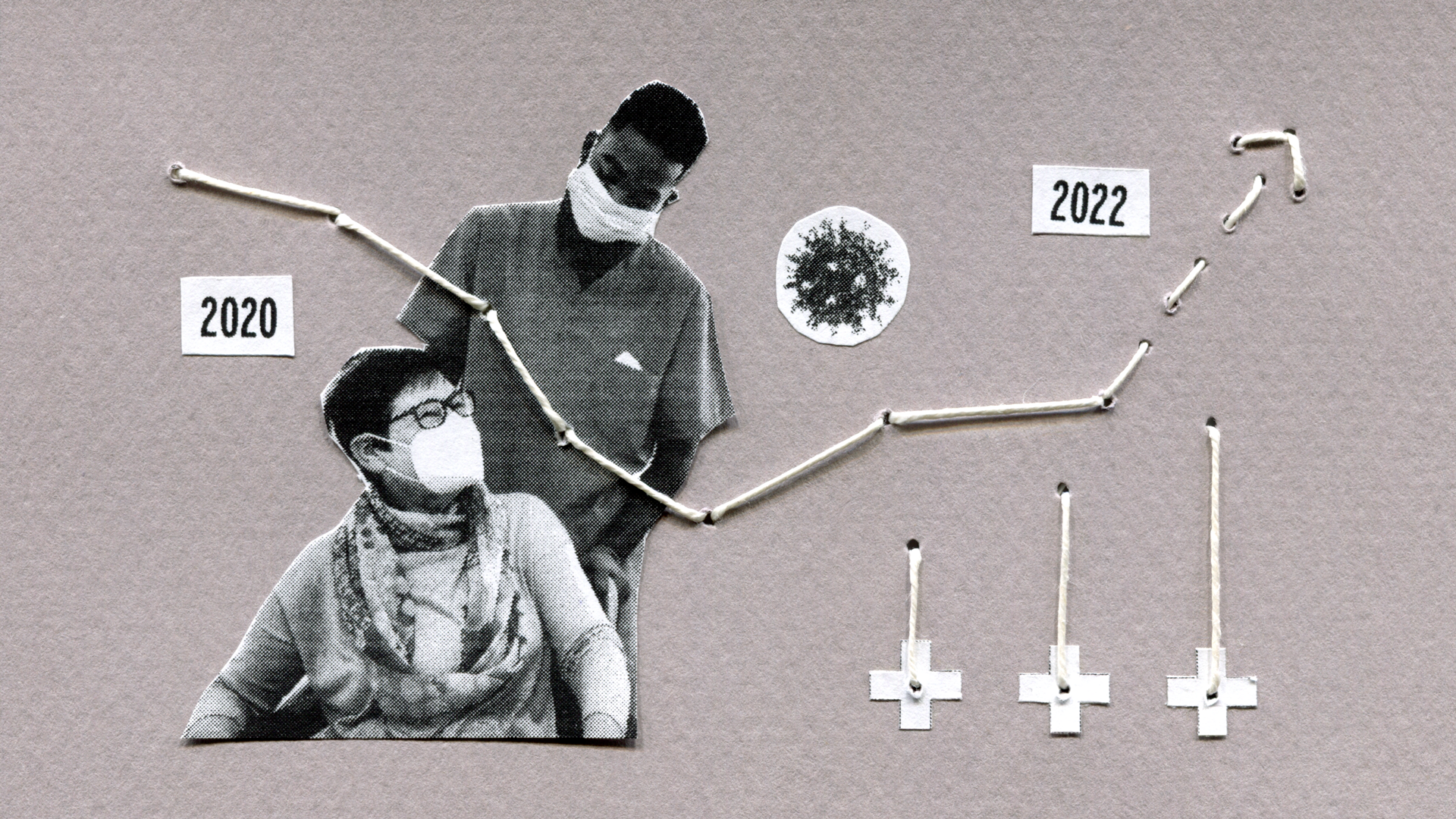 The COVID-19 pandemic is still wreaking havoc on the long-term care industry, months after the wave of deaths and illnesses began to ease in nursing homes.

Deaths in long-term care facilities have plummeted since the vaccine rollout began last December, but residents and workers still make up roughly 1 in every 3 COVID-19 deaths in the United States. Now, they’re facing a workforce exodus, and the toll is serving as a catalyst for lawmakers, advocates and health care providers to reimagine how the country provides for the elderly and people with disabilities — as well as the roughly 4.5 million workers charged with their care, many of whom are low-income women of color.

“This country can no longer kick this can down the road,” said April Verrett, chair of the Service Employees International Union’s national home care council and president of a local in California. Going forward, long-term care should “deliver the care that people need and not neglect the workers who work in that system, because it goes hand in hand.”

New Morning Consult polling suggests a long road to recovery: 19 percent of direct care workers — including those in nursing homes, other facilities and home health workers — said they’ve quit their jobs since February 2020. Turnover rates are already high in the field, where workers help patients bathe, dress and manage other aspects of their care — sometimes grueling work for which they’re often paid minimum wage. 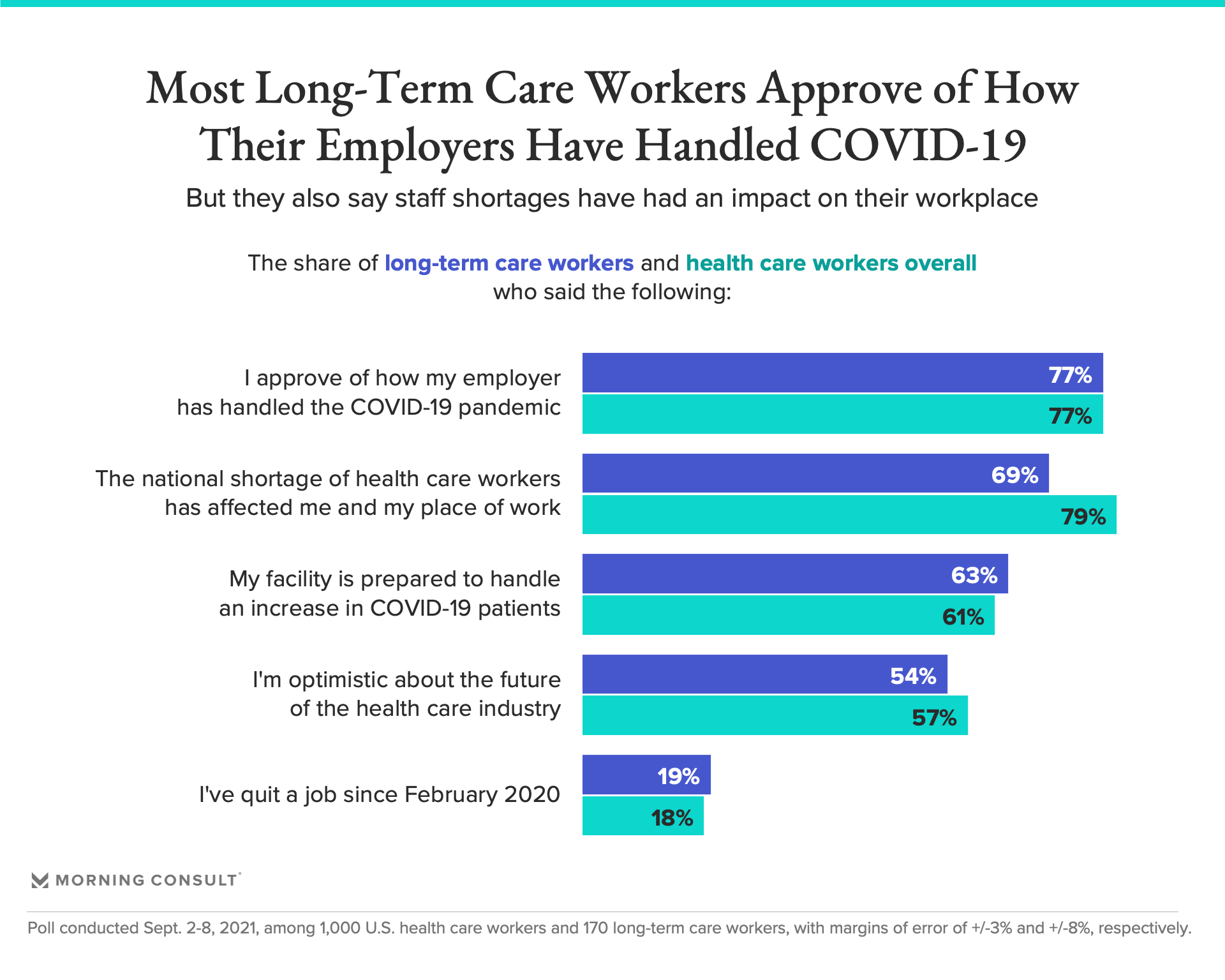 “The long-term care sector is facing the worst staffing crisis in its history,” said Mark Parkinson, president and chief executive of the American Health Care Association and the ​National Center for Assisted Living, which represents more than 14,000 senior living facilities. “What is unclear is whether this is a temporary phenomenon or whether this is a structural change that could fundamentally change the sector moving forward.”

These facilities, which house more than 1 million older adults and are mostly for-profit companies, warn that they’ve been strained financially during the pandemic, potentially leading to more than 1,800 closures. Parkinson said some homes “are no longer admitting new residents because they don’t have the staff to take care of them.”

In the poll, 69 percent of long-term care workers said the national staffing shortage has already affected them and their place of work, and operators worry that vaccination mandates could lead to the exit of even more of these workers. The survey found that long-term care workers were more likely than other health professionals to be unvaccinated. 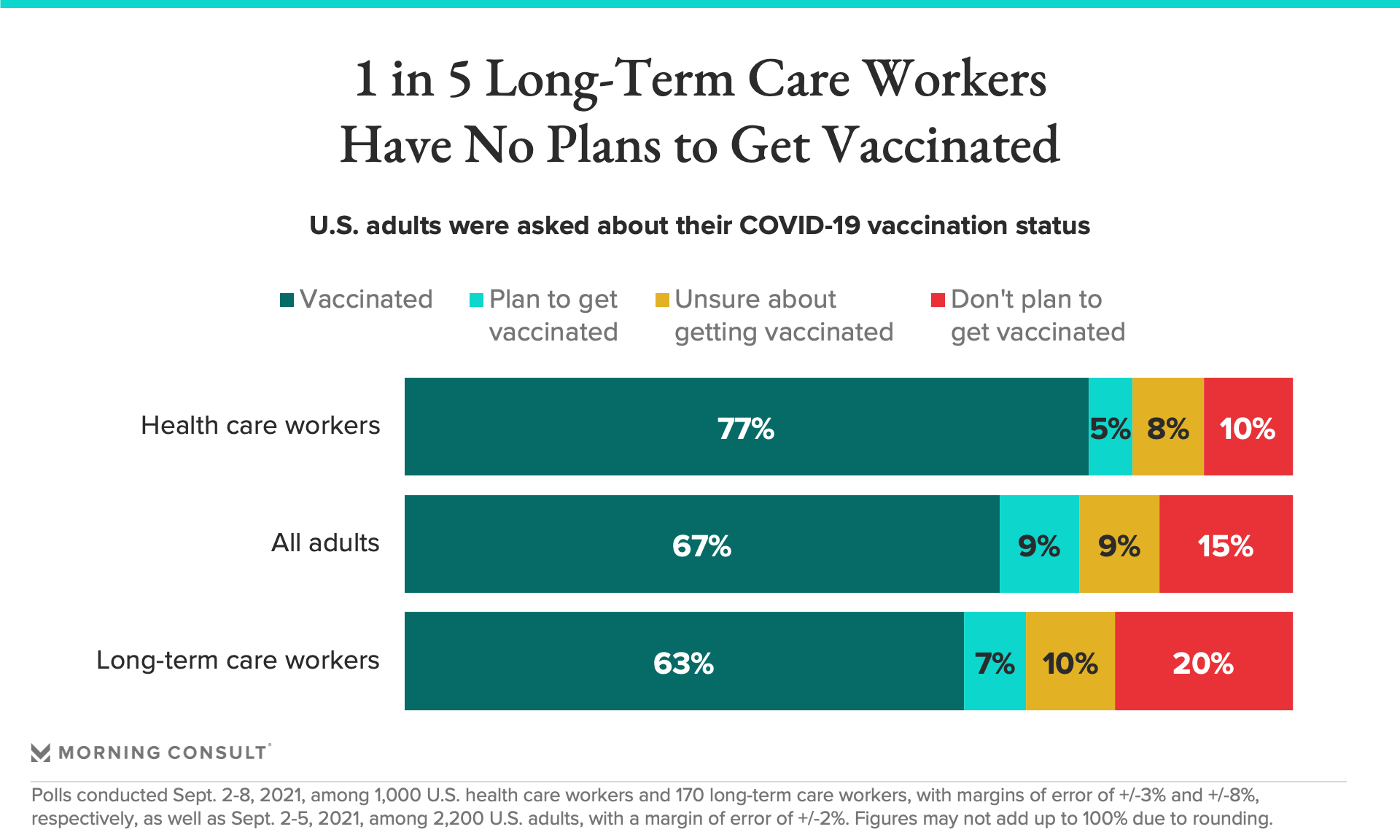 But despite COVID-19’s burden on their industry, 71 percent of long-term care workers also said they approve of how these facilities have handled the pandemic.

Now, lawmakers are looking to reform the country’s caregiving landscape, with Democrats pushing for increased oversight of nursing homes and a $190 billion investment in home- and community-based care as part of their multitrillion-dollar social spending bill. Across the country, more than 800,000 people are on state waiting lists for such care, which is paid through Medicaid. The average waiting period is more than three years; in at least one state, it’s been 14 years.

“We really have this moment of time to play catchup with a system that has been underinvested in,” said Amy Gotwals, who leads advocacy work at USAging, formerly known as the National Association of Area Agencies on Aging.

Related: Health Care Workers’ Message to Future Colleagues: Don’t Join Us Unless ‘You Are Completely Committed to It’

Yet the $190 billion proposal — already short of the $400 billion President Joe Biden asked for this spring — may be slashed further as lawmakers try to come to a consensus on the full package. All the while, the problem is getting worse. In at least 25 states, one or more providers of home- and community-based services have permanently closed during the pandemic, according to a Kaiser Family Foundation report.

Gotwals acknowledged it’s “hard to do it when you’re on the backfoot, which is where everybody is now.”

Ironically, shoring up the home-care workforce could end up squeezing the institutional settings, Parkinson noted, as providers compete for a limited number of workers in the short term. In the long term, he said the caregiving field should offer career pathways, rather than short-term jobs.

Verrett, for one, said long-term care facilities shouldn’t wait for policymakers to dole out more funding before taking steps to build up their workforces.

“We’ve talked a lot over the last 18 months about not going back to the status quo,” she said. “This is one of those places where the status quo is actually not good enough.”