About 3 in 5 adults and parents oppose the creation of the site for children ages 10-12, while over half support the suspension of those plans 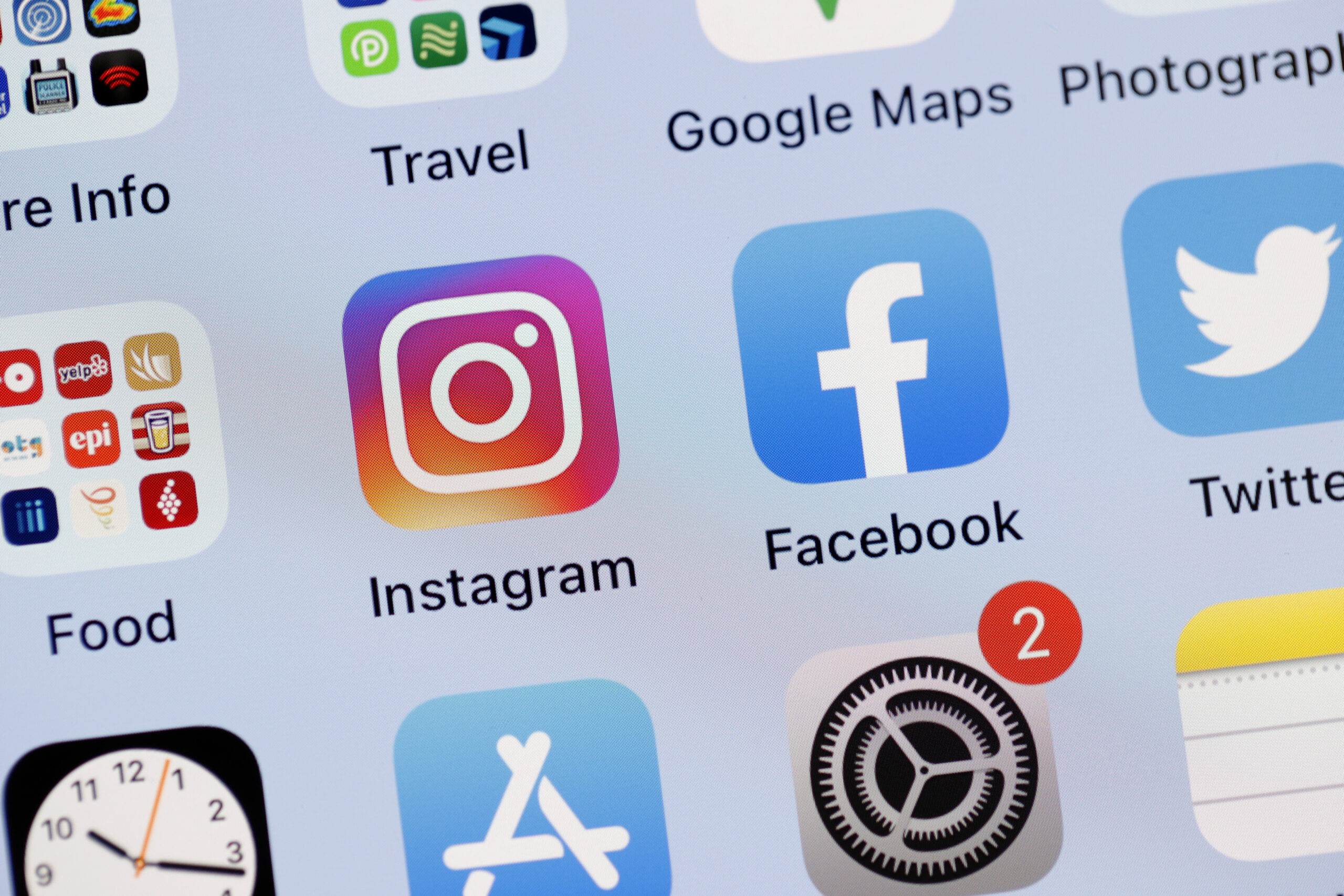 As scrutiny intensifies around Facebook Inc.’s paused “Instagram Kids” venture, most of the public, including parents, opposes the controversial platform aimed at young people ages 10-12, according to a new poll.

Fifty-eight percent of U.S. adults said they are against plans to create the site, the Morning Consult poll found. And 52 percent said they support Facebook’s recently announced pause on the initiative.

Fifty-seven percent of all parents, and 53 percent of parents with children ages 5-13, said they opposed Instagram Kids, while comparable shares of both demographics said they supported the plan’s pause. 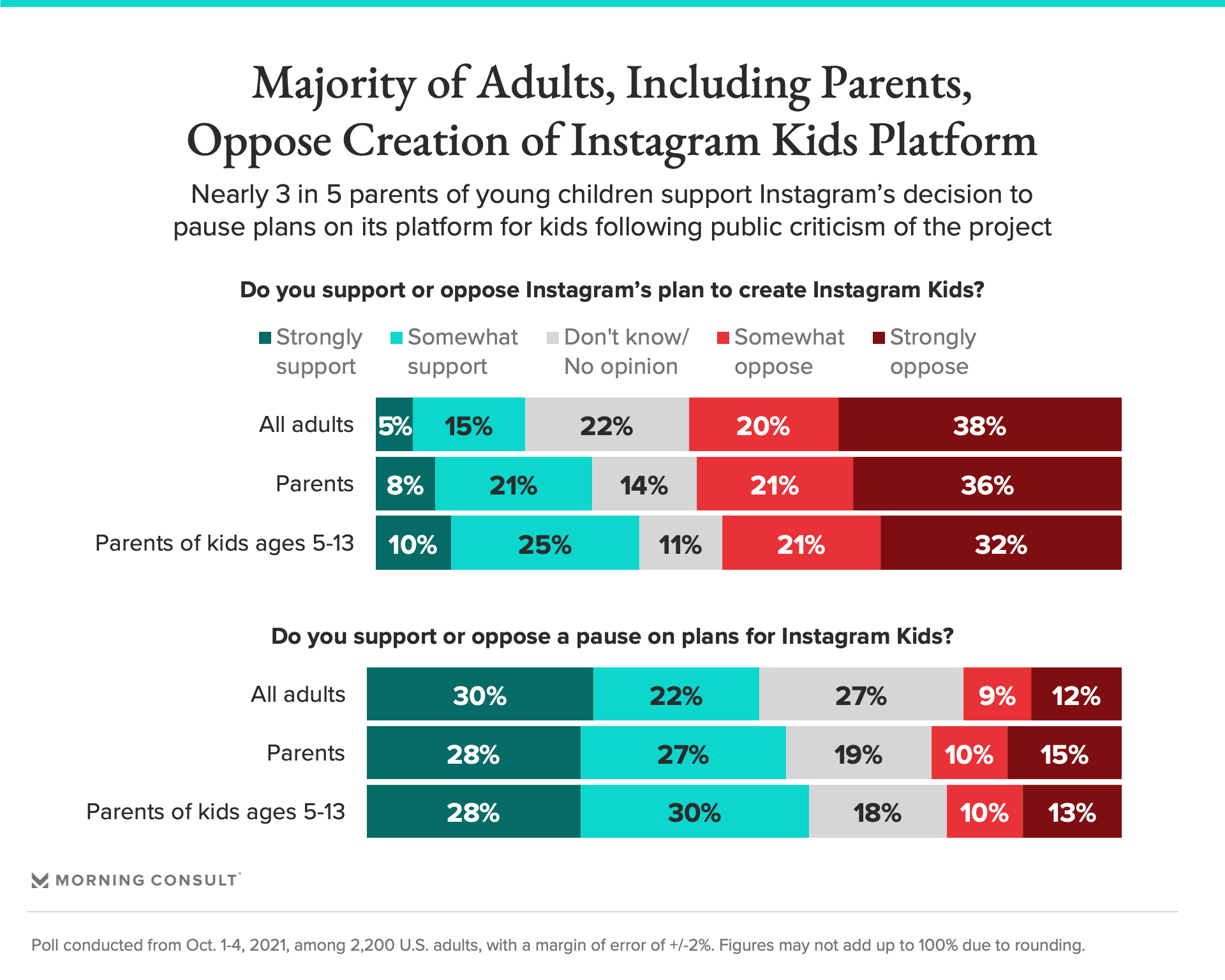 In general, the public also is against potential plans by social media sites and apps to offer platforms aimed at children between 10-12, as 63 percent said they opposed such platforms compared to 19 percent who said they favored them. Fifty-eight percent of all parents said they opposed these platforms for young people, and 54 percent of those with children ages 5-13 said the same. 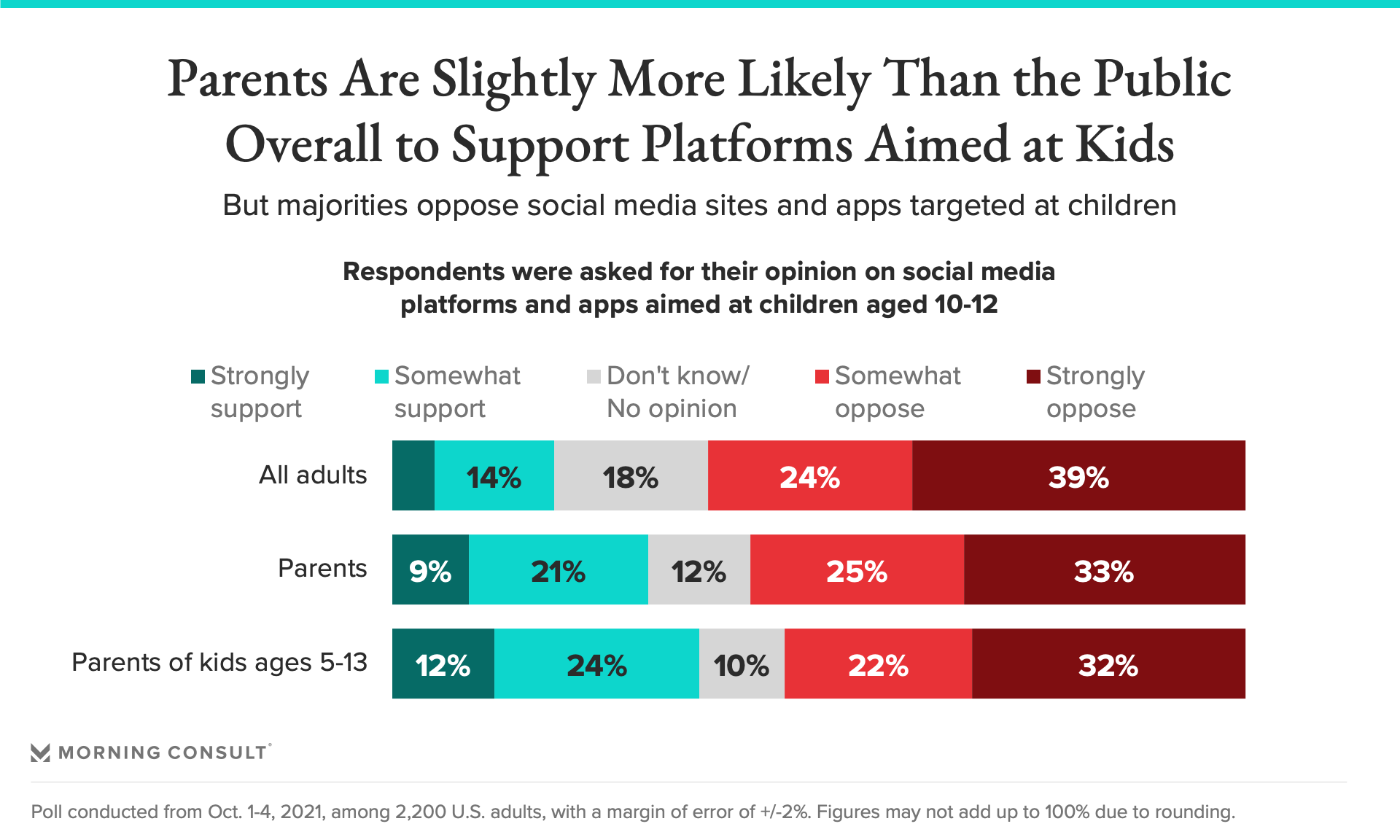 The mental health effects Instagram can have on young people have been spotlighted recently after a report in The Wall Street Journal said Facebook buried internal research that showed it knew of the negative impacts.

Since then, the company put its Instagram Kids initiative on pause and pledged to build more parental supervision tools. Although Facebook downplayed those claims, the poll shows that a significant portion of the public is concerned about the mental health impacts of social media on children.

Eighty percent of adults said they are concerned about social media’s effects on kids’ mental health, including 86 percent of all parents and 87 percent of parents with young children.

But despite this sentiment, there appears to be little desire to use social media less. Just 27 percent of adults said they are considering using the platforms less frequently because of their impact on children’s mental health. Parents of young children were more likely to say they’d reduce their own social media usage, at 48 percent.

Related: Texas Law Preventing Social Media Bans Based on Political Viewpoints Has Backing From Just Over Half of Voters

“For example, if there are no longer any adults in their feeds, children may be even more likely to engage in social comparison since they will only be seeing their peers, potentially damaging their mental health even more,” Blair said in an email.

The public also believes that peer and societal pressure on young people is more intense now. Seventy-three percent said pressure is higher now on kids than in previous eras, and when asked about their own children, 63 percent of parents said they believe their kids face more societal and peer pressure than they did. Seventy-five percent of adults said mental health should be a top priority for children. 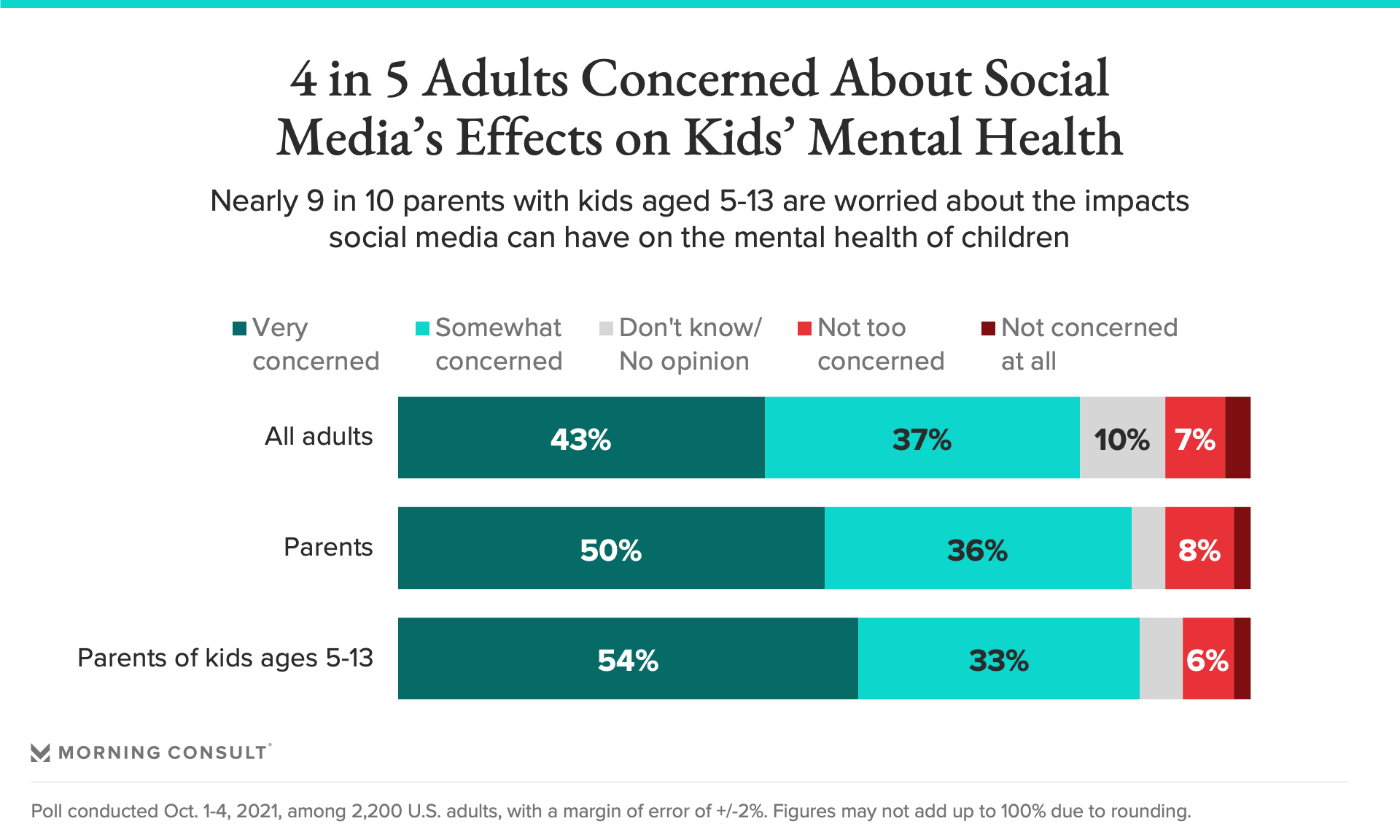 At a hearing last week before a Senate subcommittee, Facebook Global Head of Safety Antigone Davis received criticism from lawmakers, while former employee and whistleblower Frances Haugen testified before the same panel Tuesday after telling CBS’ “60 Minutes” in an interview that the company “has shown it chooses profit over safety.”

The survey was conducted Oct. 1-4, 2021, among 2,200 U.S. adults and has a margin of error of 2 percentage points. The overall parents and parents with children ages 5-13 subsamples have 4- and 5-point margins of error, respectively.