This Halloween, Americans Are Ready to Party Like It’s 2019

56% of U.S. adults say they plan to celebrate Halloween this year, up from 42% last year and in line with 2019 levels 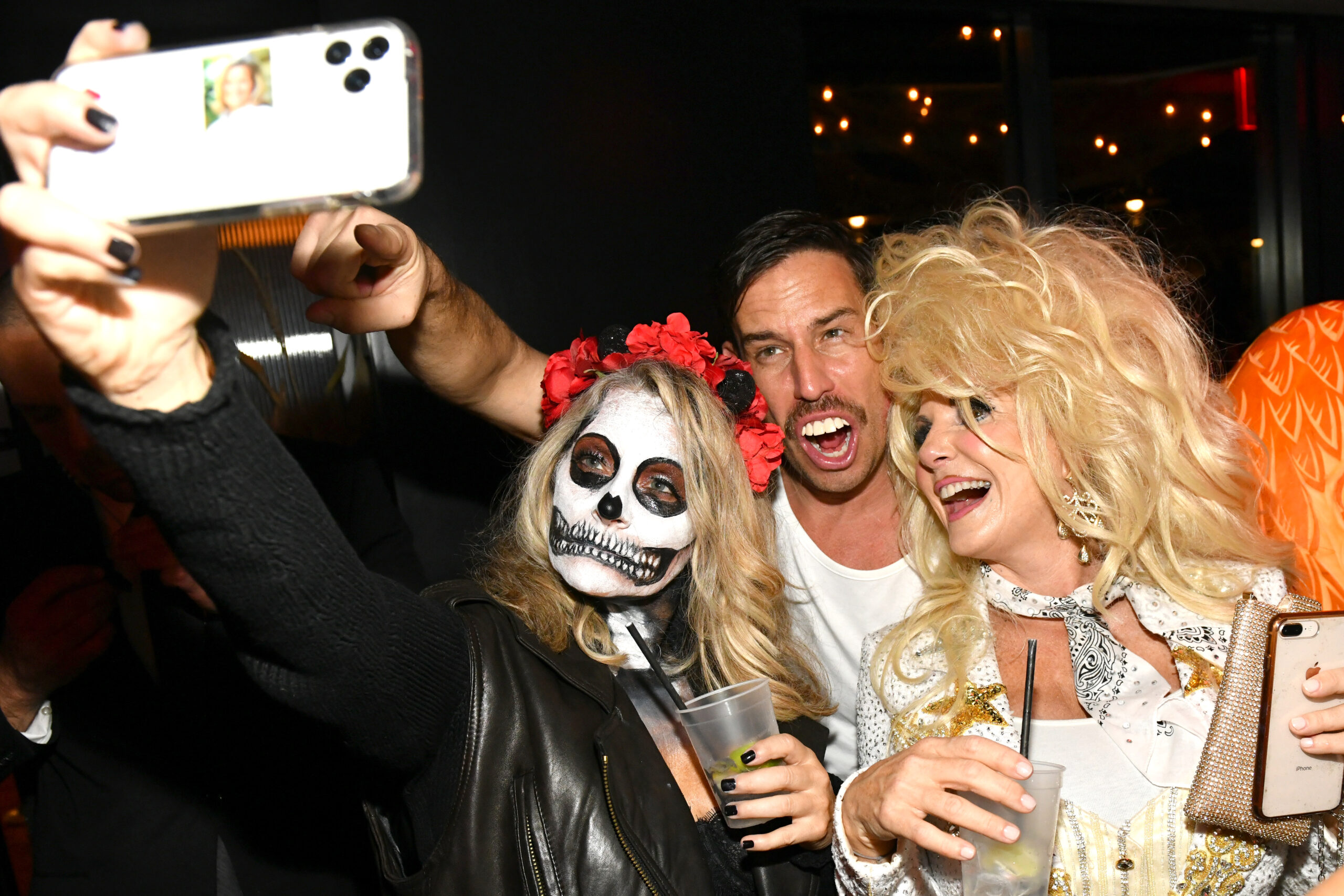 Guests attend Heidi Klum's 20th Annual Halloween Party on Oct. 31, 2019 in New York City. According to Morning Consult data, 56 percent of Americans said they plan to celebrate Halloween this year, which is roughly in line with the share who said they celebrated in 2019, prior to the pandemic. (Craig Barritt/Getty Images)
By Alyssa Meyers

Despite the ongoing COVID-19 pandemic, Americans are embracing the spooky spirit of Halloween not only a lot more than they did last year, but also about as much as in 2019, according to new polling.

Per an Oct. 1-5 Morning Consult survey, more than half (56 percent) of U.S. adults said they plan to celebrate Halloween this year, up 14 percentage points from the 2020 holiday. That’s roughly in line with the 57 percent who said they celebrated in 2019, prior to the pandemic.

Perhaps due to the growing prevalence of vaccines, the survey reveals that the American public is planning for a relatively normal version of Halloween this month. 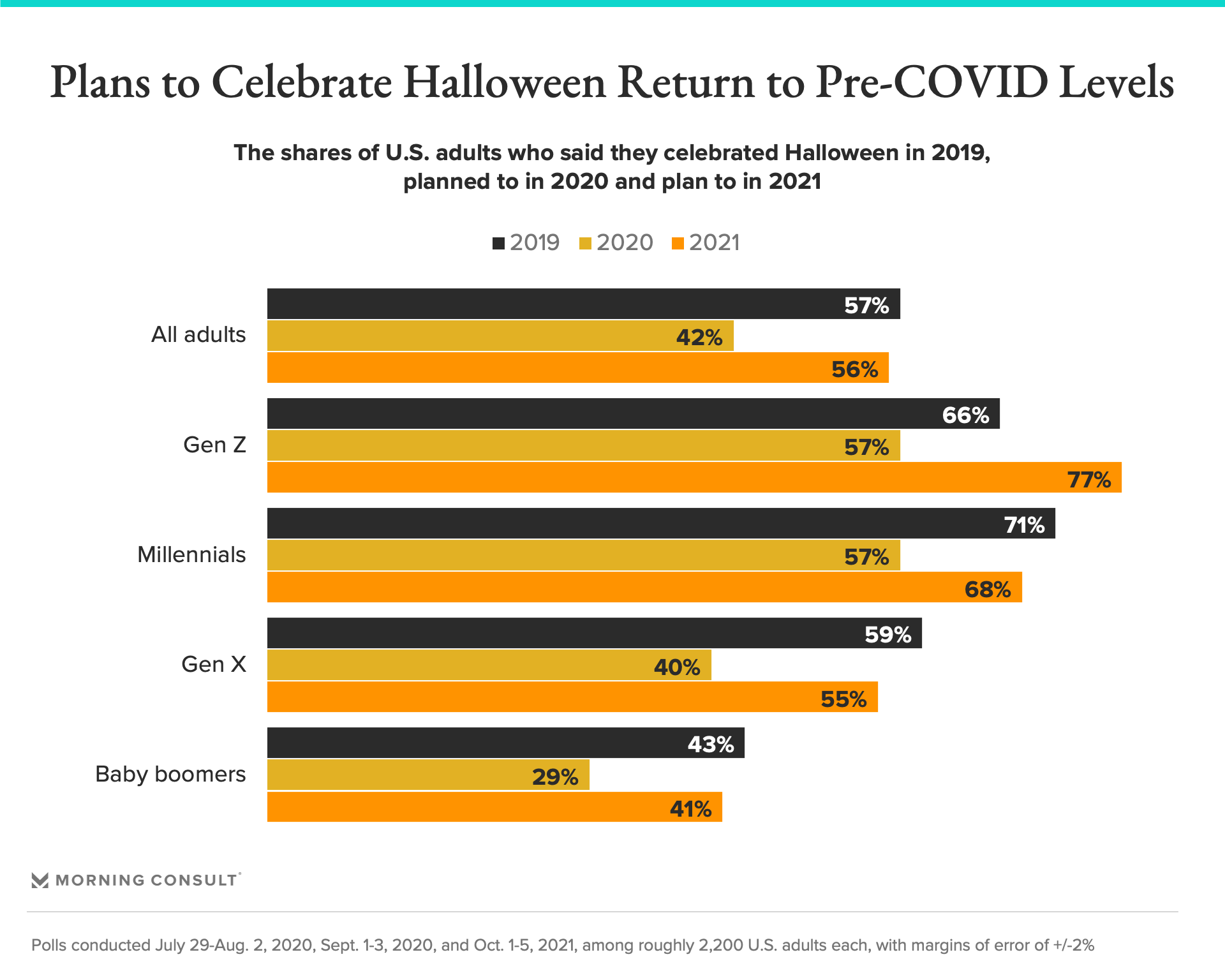 Generation Z is especially enthusiastic about Halloween this year, with 77 percent of respondents in that demographic saying they plan to celebrate. (Fifty-seven percent said they planned to last year.) Gen Z was also generally more inclined to attend parties and don costumes than the general population last year — a trend that holds up in 2021.

Among all U.S. adults, roughly 1 in 4 (24 percent) said they plan to attend a Halloween party this year, marking another rebound to levels in 2019, when 16 percent said they went to a party. 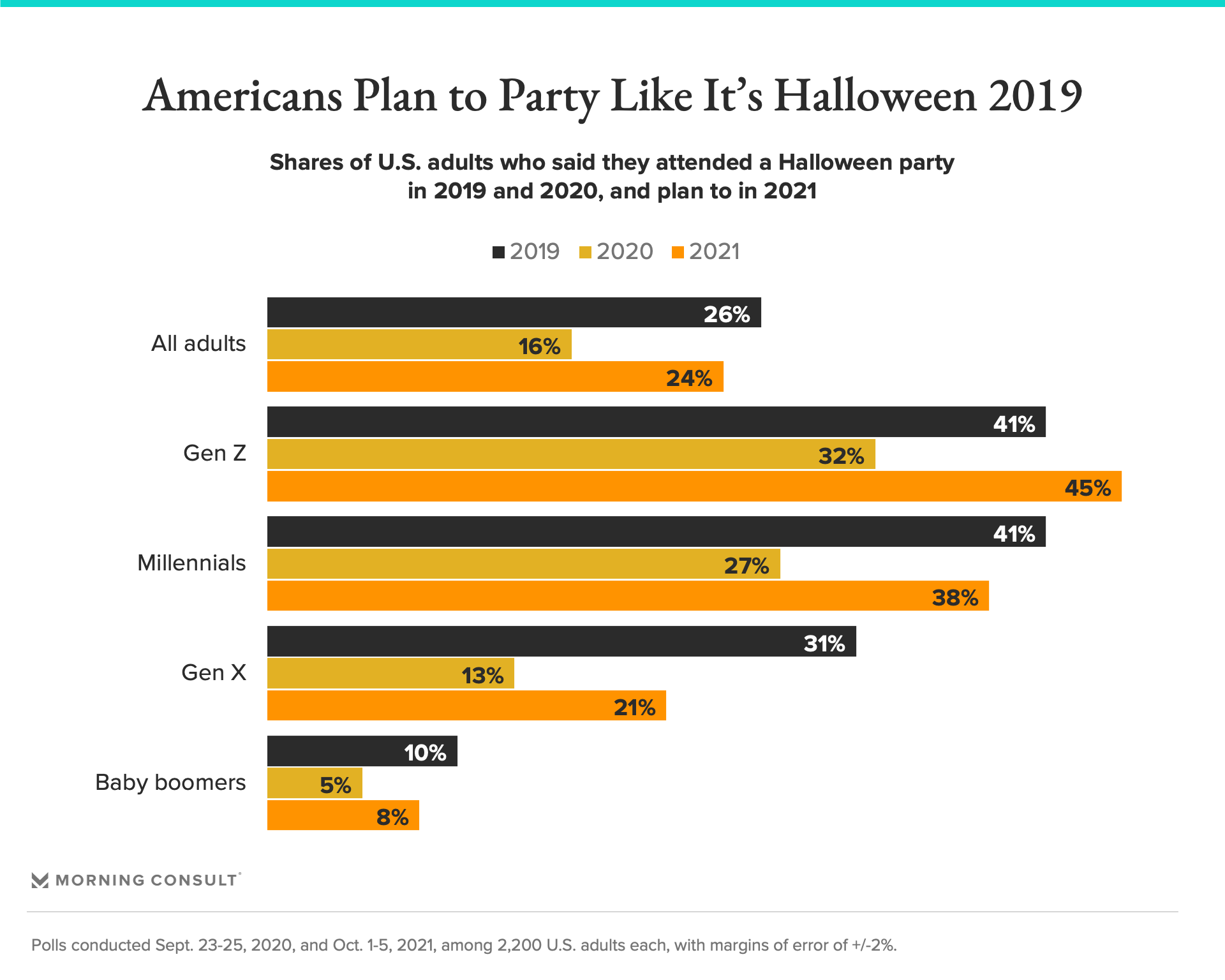 This Halloween could also see double the number of trick-or-treaters as last year, according to the poll, which was conducted among 2,200 U.S. adults and has a margin of error of 2 points.

Fourteen percent of Americans said that they or their children will trick or treat the same way they usually do. Last year, only 7 percent of respondents said the same.

Expect to see more people in costumes, too: Roughly 1 in 3 adults (31 percent) said they plan to dress up this year, while 24 percent said they did so in 2020. The National Retail Federation expects $10.1 billion to be spent on Halloween in the U.S. in 2021, according to its annual Halloween spending survey, up from $8 billion last year. 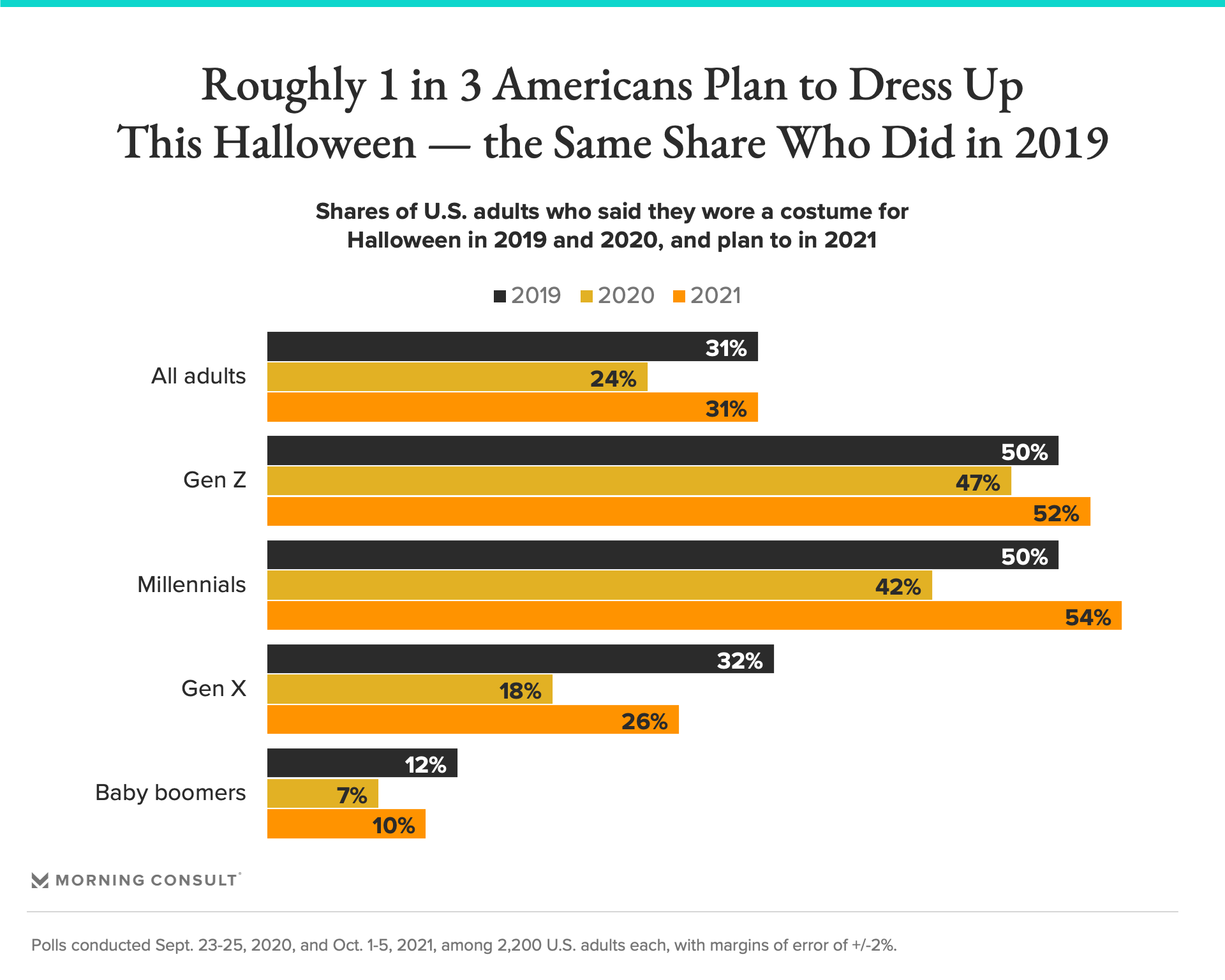 And with more trick-or-treating comes more candy. A quarter of consumers said they plan to buy as much candy as they usually do, an increase of 7 points from 18 percent last year and a positive sign for the candy industry.

The ever-controversial candy corn, meanwhile, ranked much lower on the list when Morning Consult asked consumers to select their favorite common candy products. Only 16 percent of adults chose the option. Maybe next year, candy corn. 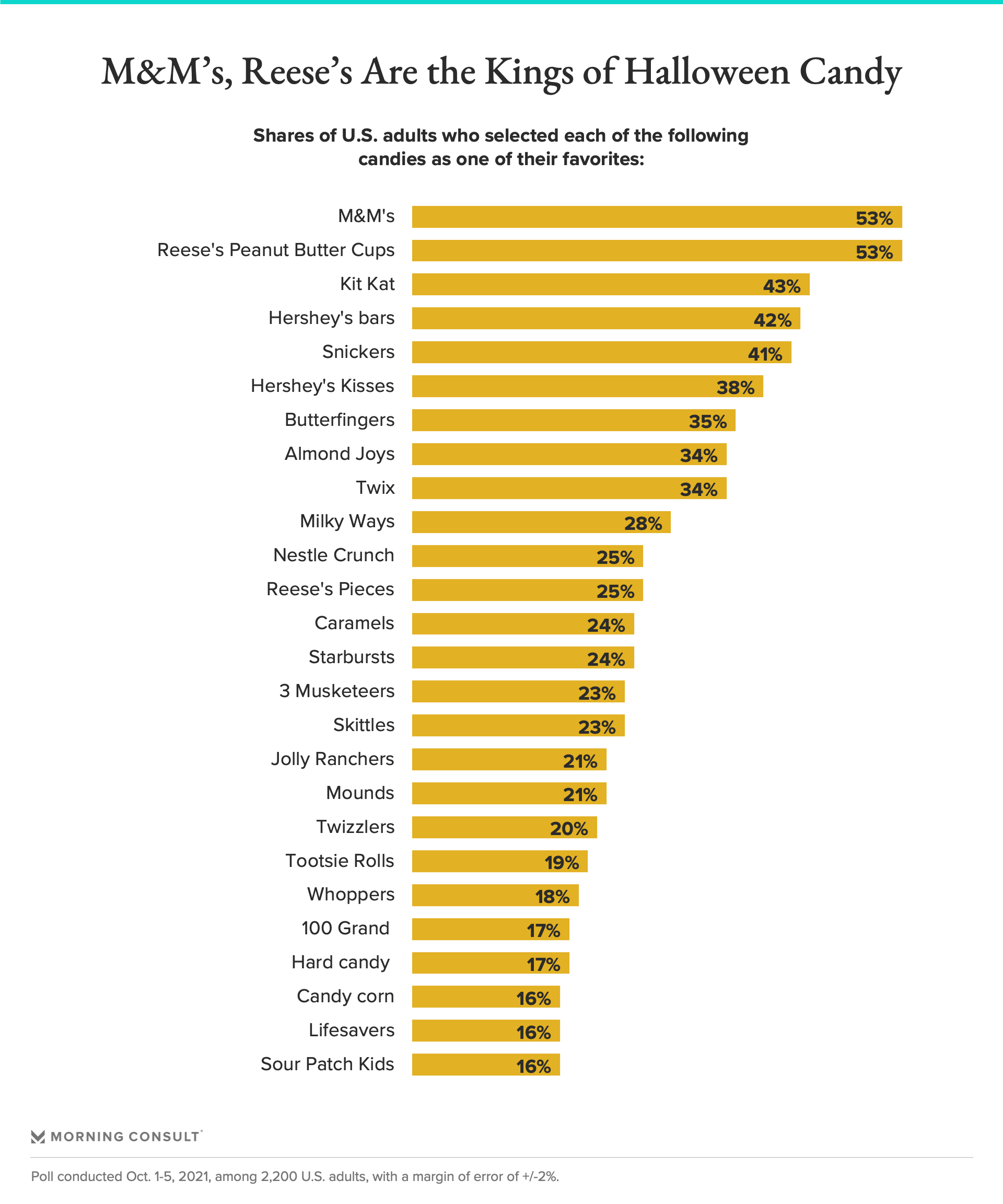