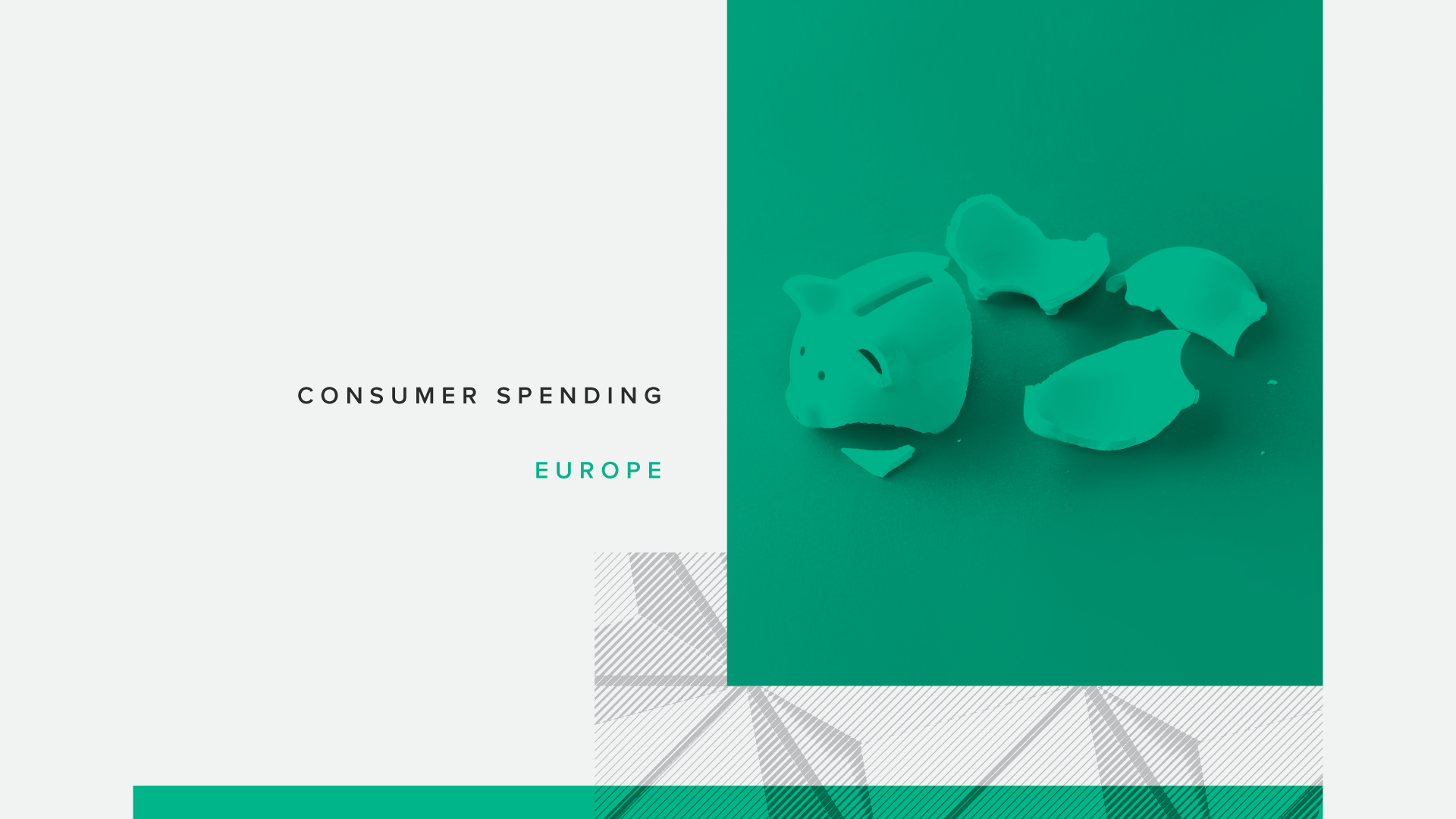 Morning Consult’s Index of Consumer Sentiment (ICS) in the United Kingdom has fallen 9.1 percent since the end of August. Despite a delta-driven stumble in early July, confidence held up throughout the summer as more British consumers got vaccinated1 and learned to live with the risks of the pandemic. Thus, unlike prior decreases in U.K. consumer confidence during the pandemic, the current drop in confidence is not the direct result of an increase in new cases. 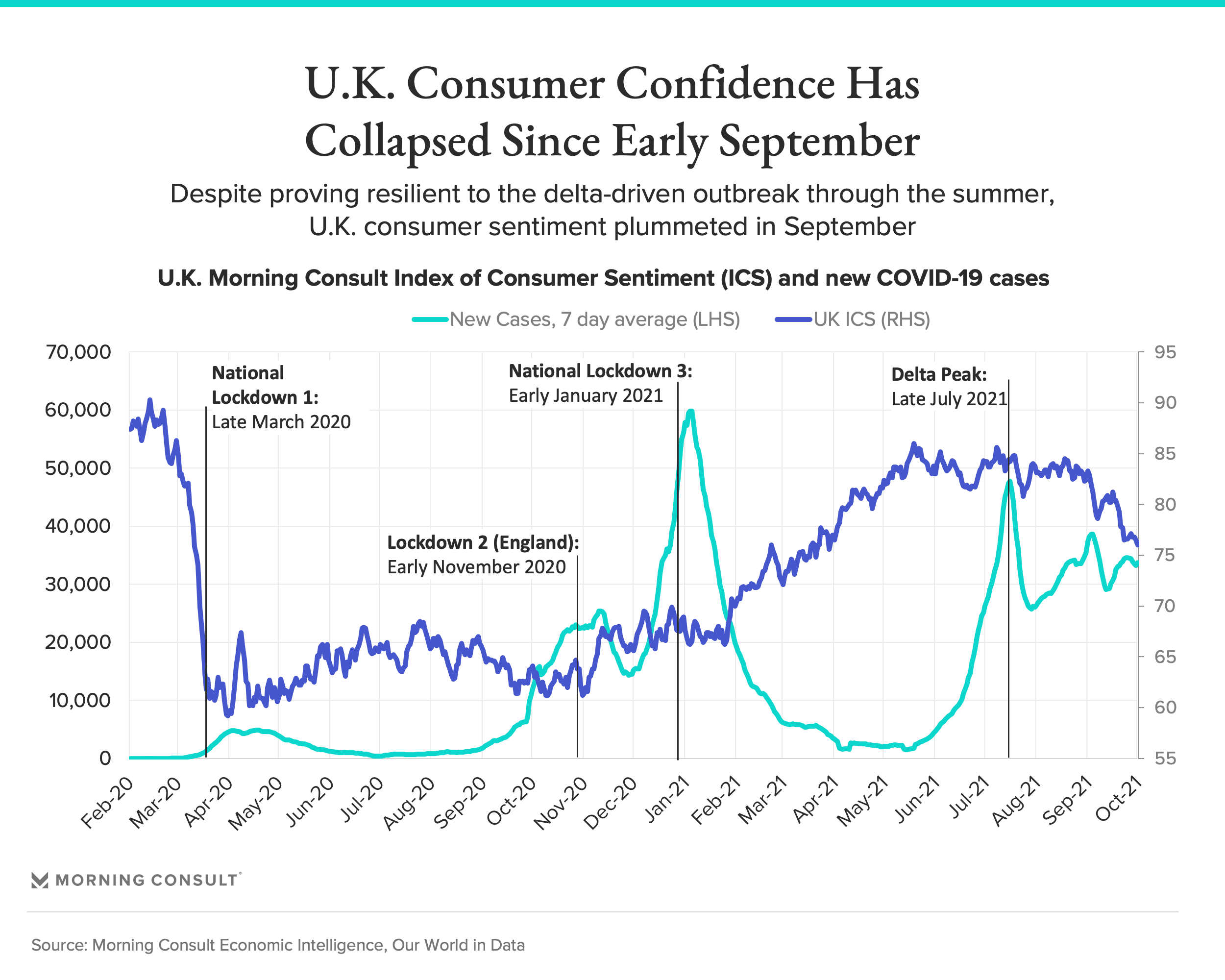 Most of the recent decline in confidence can be attributed to deteriorating views about the future state of business rather than any immediate impact on consumers’ pocketbooks. Among the components of the ICS, 12-month expectations for business conditions declined the most, falling 12.6 percent in the last 30 days, compared to a 4.7 percent drop in views regarding the current condition of personal finances.

Supply-side issues are increasingly top of mind for British consumers

With global supply-side issues compounded in the United Kingdom by complications surrounding Brexit and local distribution backlogs, a large share of British consumers are having difficulty obtaining certain goods, particularly groceries: Thirty-nine percent of prospective U.K. buyers reported issues with purchasing grocery items in September. The United Kingdom has the second-highest rate of grocery shortages globally among the 15 countries tracked by Morning Consult, second only to India, which suffers from chronic supply constraints.

British consumers are also broadly facing more supply difficulties than their European peers: In September, prospective U.K. buyers were more likely to report difficulties purchasing items than those in either France or Germany in 9 of the 12 categories tracked by Morning Consult. 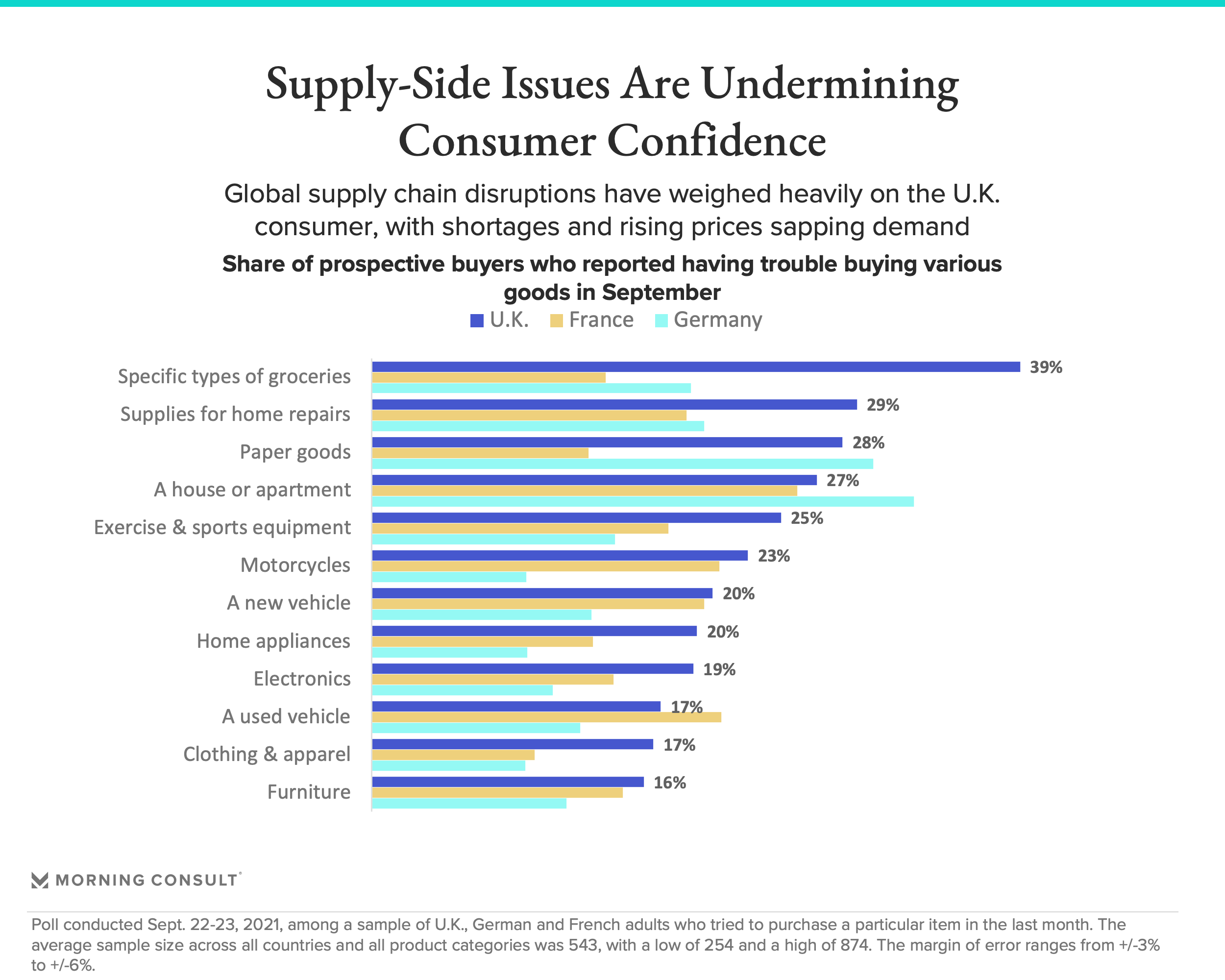 Overall, British consumers were 8.8 percentage points more likely than French consumers and 8 points more likely than German consumers to report trouble buying goods, as labor shortages in key sectors like transport weigh heavily on distribution in the United Kingdom. According to the Road Haulage Association, a U.K. trade group for road transport operators, the pandemic saw European truck drivers working in the country return home in droves, and Brexit has largely prevented them from returning to work. U.K. workers lack the skills and licenses needed to rapidly replenish the labor supply lost due to Brexit, and the domestic labor force is also shrinking, with Morning Consult’s U.K. labor force participation falling from 57.7 percent in mid-April 2021 to 55.1 percent as of Oct. 9. Consequently, Britain faces a shortage of drivers who are capable of delivering the goods demanded by consumers.

British consumers are also increasingly worried about inflation, and what rising prices will mean for their households’ bottom lines. The share of U.K. adults who say they are “very concerned” about inflation jumped by almost half from August to September, rising from 21 percent to 32 percent.

The deterioration in confidence likely indicates further weakness moving into the holiday season. After a robust start to 2021, retail spending declined over the summer, with volumes contracting from May to August. While retailers are likely hoping for a boost in sales from end-of-year shopping, the sharp drop in the ICS signals more months of flat or declining sales, undercutting a prospective revenue boost for U.K. retailers. 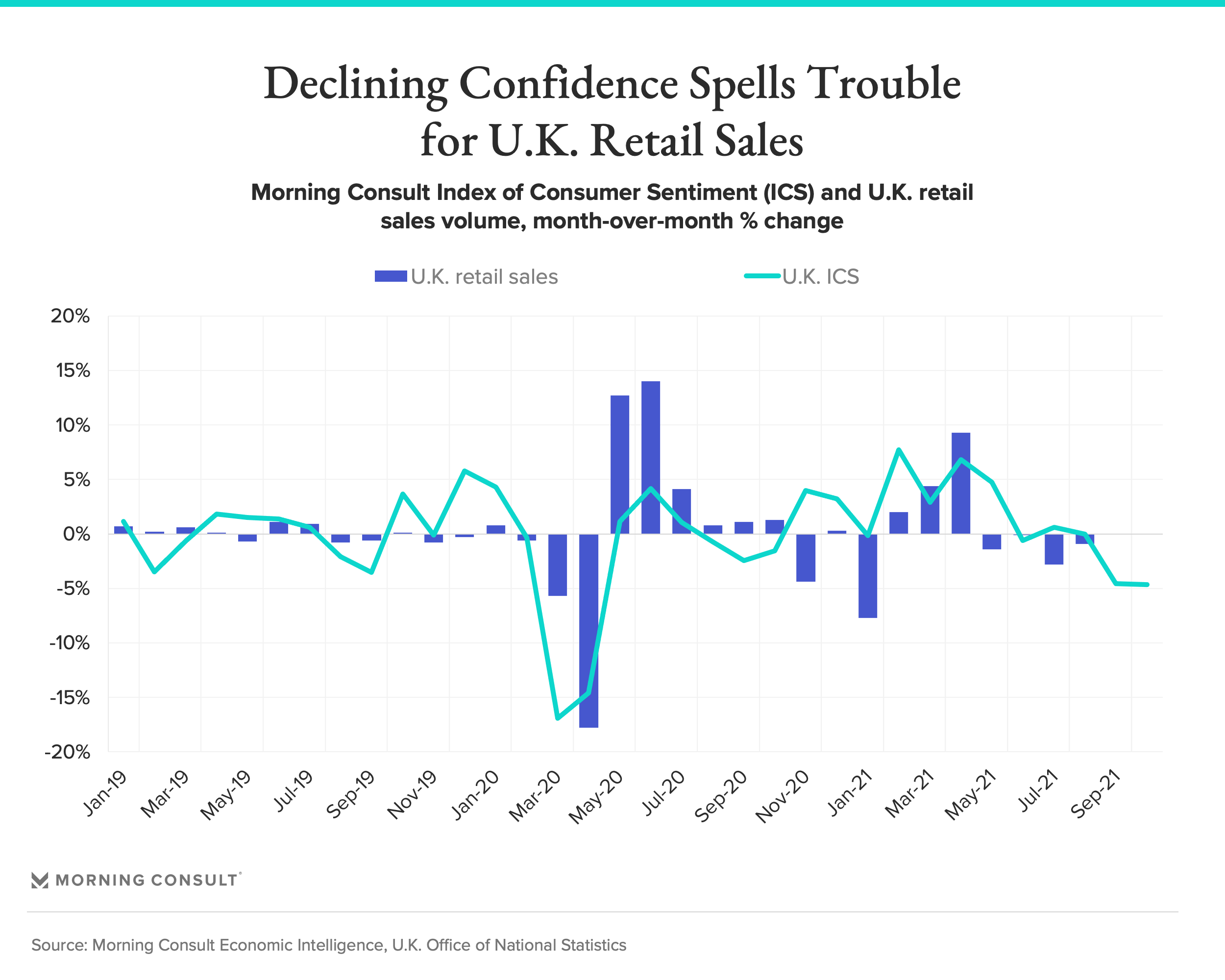 Policymakers may have less room to maneuver

Should the ICS once again prove an early indicator for weakness in retail spending, it could place policymakers in a tight spot: Weaker spending going forward complicates the economic outlook, making it less likely that the Bank of England will raise interest rates this year despite September’s stellar jobs report.

Meanwhile, Prime Minister Boris Johnson has decided to rein in fiscal spending and embrace recent labor disruptions attributable to Brexit, saying they will ultimately lead to higher wages for British workers. While Johnson may be correct in the long run, the pandemic continues to expose the challenges of building a domestic labor force capable of rapidly adjusting to meet the near-term needs of the United Kingdom.

1 As of July 27 (the delta peak in the United Kingdom), 55.6 percent of British adults were fully vaccinated: https://ourworldindata.org/coronavirus

Morning Consult Economic Intelligence: Global Consumer Confidence interviews more than 11,000 adults per day across 15 countries. In the United States, more than 6,000 daily interviews are conducted. The interviews are conducted online through multiple nationally recognized vendors. Morning Consult uses a stratified sampling process based on age and gender to reach a broad, nationally representative audience in each country. The interviews are used to construct Morning Consult’s Index of Consumer Sentiment (ICS). The ICS is based on the responses to five questions on current conditions and 12-month expectations for personal finances, 12-month and 5-year expectations for business conditions, and current buying conditions. More detailed survey information is available here.

The daily employment survey compares labor market conditions across and within countries, providing enhanced scale, frequency and depth not captured by official data sets. Morning Consult’s labor force calculations are simplified and standardized versions of those used by the Bureau of Labor Statistics, OECD and International Labour Organization, and provide a like for like comparison of the employment, unemployment, and labor force participation rates across countries. The survey also asks about workers’ intention or openness to switch jobs. The survey is conducted on a daily basis in 15 countries among a representative sample of 11,000 adults, with 6,000 surveys conducted daily in the United States alone. Results are typically reported as a 4-week moving average.

The geopolitical risk survey measures major geopolitical and economic trends across the world’s largest markets, and provides insights into hot button issues and early signals for policymakers in the public sector and decision-makers at multinational firms. It asks questions around inflation and purchasing behavior, price expectations, financial resiliency, housing, ESG, business climate, national security, and trust in political figures and institutions, both within and outside of the respondents’ home country. The survey is conducted on a monthly basis among representative samples of 1,000 adults from 15 countries, including the United States. The survey was first run in January 2021. Data is collected in the last week of each month.

Starting in September 2021, the geopolitical risk survey asks adults across 15 countries which products they are having difficulty procuring and how they have adapted their buying behaviors when faced with delays and shortages.