Federal Regulators Want to Bolster Network Resiliency During Natural Disasters. Hurricane Ida Offers Some Lessons on Where to Begin

Thousands lost cable and wireless connections in Louisiana during Hurricane Ida. Now, policymakers are examining how networks can be strengthened faster and how to get telecom companies onboard

When Hurricane Ida made landfall in parts of Louisiana, Alabama and Mississippi this summer, mobile and internet networks were among the first pieces of infrastructure to fail.

While experts say that bolstering network resiliency is critical as natural disasters such as hurricanes and wildfires intensify due to climate change, putting increasing strain on telecommunications networks, the issue is rarely a high priority for service providers and governments.

However, it appears the outages from Hurricane Ida have raised the level of urgency, given the Federal Communications Commission’s recent decision Sept. 30 to revisit its rules on how companies are required to deal with disruptions to communications. And while pressure mounts to step up resiliency efforts, Morning Consult data shows that the public is more likely to trust service providers than government entities to get the job done. 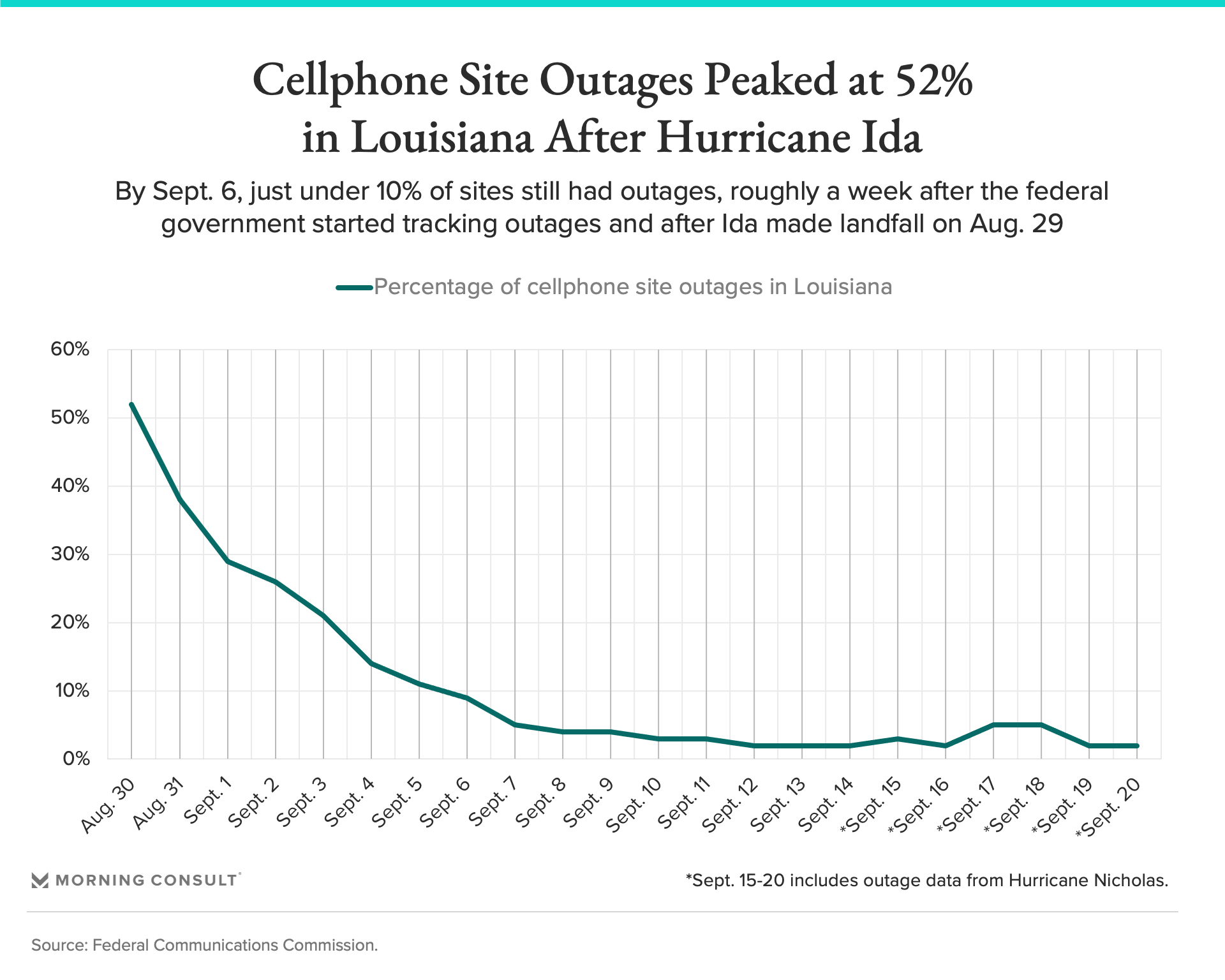 Hurricane Ida made landfall in Louisiana on Aug. 29 and was considered the worst storm to hit the region since Hurricane Katrina roughly 16 years earlier. Louisiana’s communications networks suffered the most damage from Ida in the United States, with 52 percent of Louisiana’s 2,700-plus served cell sites out of service by Aug. 30, according to FCC data. In the span of a week, however, outages were down to less than 9 percent across the state.

That’s a vast improvement over what happened during Hurricane Katrina in 2005, according to an FCC report, when millions lost service both during the storm and the resulting flooding, due in part to a lack of coordination and planning.

Regardless, the outages from Ida prompted stinging criticism from Sen. John Kennedy (R-La.), who said in a letter to AT&T Inc. Chief Executive John Stankey that the company’s network failure was “unacceptable,” noting that first responders, unable to access AT&T’s First Responder Network, were forced “to take to the streets and social media alerting people that they would need to walk to a nearby fire or police station to get help.”

A Kennedy aide said in an email that AT&T responded to the senator’s letter and the questions he asked regarding its service in Louisiana after Hurricane Ida, but added that the response was not helpful or satisfying. AT&T did not respond to requests for comment.

Representatives of some advocacy groups said that strengthening networks is often a low priority for service providers because it eats into profits and requires sustained work.

“It’s something where you have to spend money that doesn’t contribute directly to the bottom line,” said Harold Feld, senior vice president at the tech policy nonprofit Public Knowledge. “It’s something you have to keep checking on and doing. You’re never one and done; you always have to be checking and making sure, so it tends to be that companies just aren’t good at it in the same way most people aren’t good at it.” 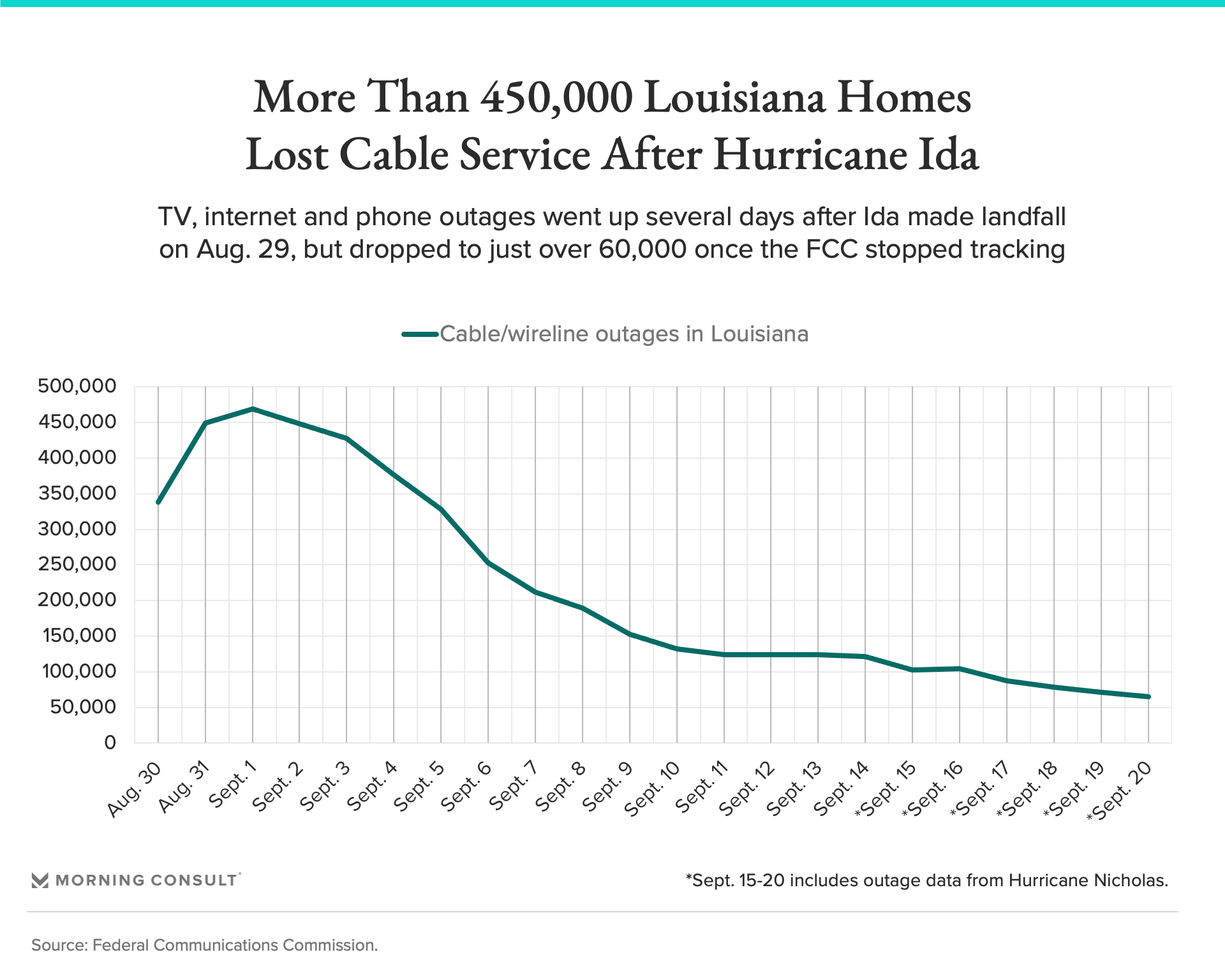 While communications services in urban areas were hit hard during Ida, they recovered within a few days, according to FCC data: For example, on Aug. 30, East Baton Rouge Parish, which includes the city of Baton Rouge and has the most cell sites served in the state at 360, lost service in 60 percent of its sites. But by Sept. 4 that figure was down to 1 percent.

It was a similar story in Orleans Parish, which includes the city of New Orleans and has 348 cell sites. Fifty-three percent of its cell sites were out on Aug. 30, but the outage percentage was just 9 percent by Sept. 5. 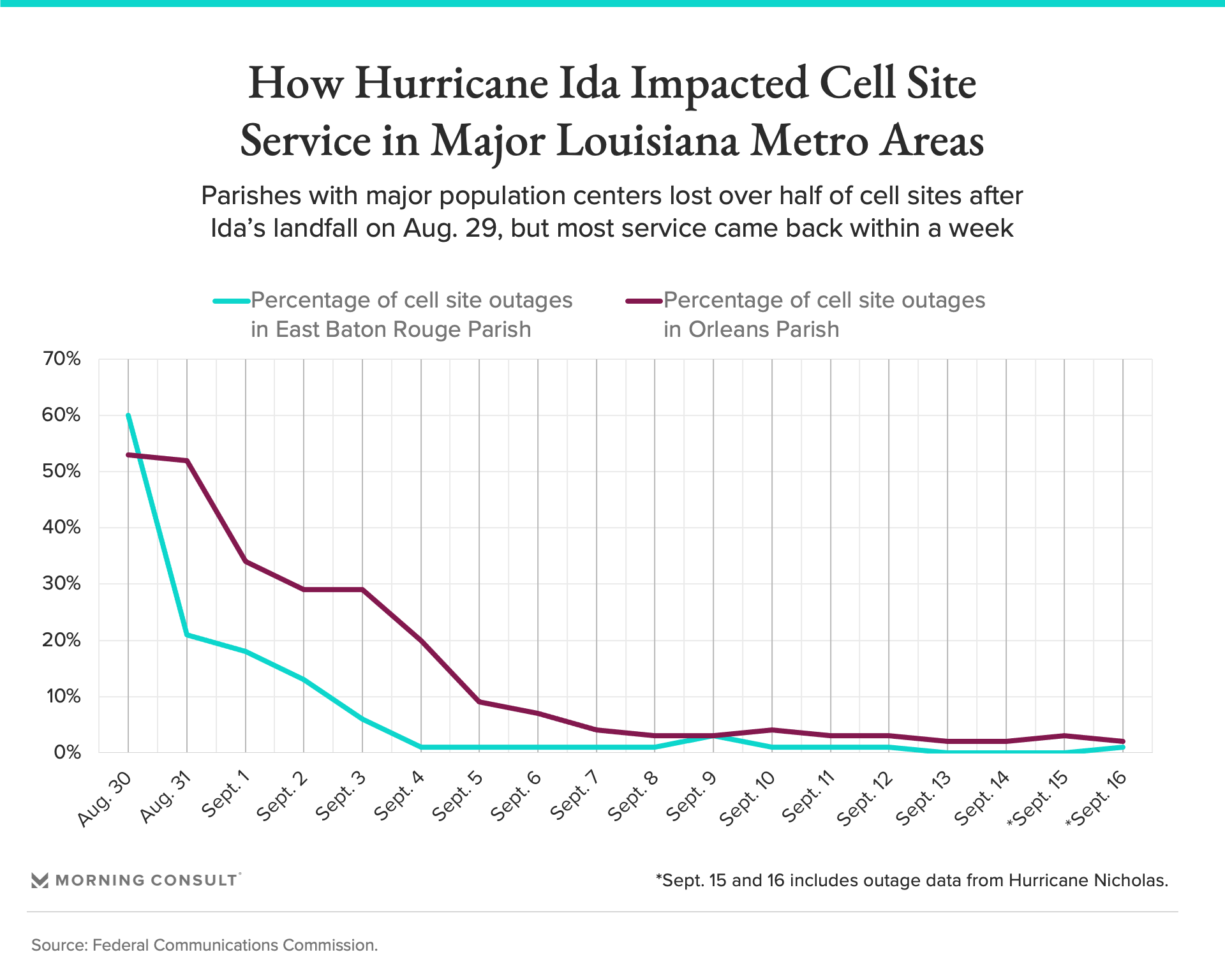 Feld said restoring service and bolstering the network is often easier in more densely populated areas, where the return on investment is more visible.

“That pays for itself and a lot more people notice,” he said. “We definitely have seen improvement since Katrina and Sandy, but you can still go for a week in the rural areas without seeing the network come back up, because you’re last on the list and get the least attention.”

The wireless industry defended the resiliency of its infrastructure during Ida: In a blog post, Meredith Attwell Baker, president and CEO of wireless communications trade group CTIA, said the network in the Gulf of Mexico region had “proven to be remarkably resilient.” A CTIA spokesperson declined to comment further.

AT&T, T-Mobile US Inc. and Verizon Communications Inc. all said in press releases that their service quickly recovered after the hurricane. AT&T said its network operated at 60 percent of normal at its worst point, while T-Mobile was at 70 percent of normal in Louisiana and Alabama on Aug. 30, and Verizon said on Aug. 31 that 85 percent of its cell sites in the path of the storm were in service.

The biggest obstacle to keeping networks functioning during natural disasters is the resulting spate of power outages. The FCC’s acting chair, Jessica Rosenworcel, said before the vote to review the agency’s resiliency rules that the lack of commercial resources at major facilities is “the single biggest reason why communications networks failed.”

Having backup power sources, especially on-site generators, would be crucial to helping networks stay up, but there is also a desire for better coordination between power utility companies and telecommunications operators to prevent outages.

Continued power outages have been particularly disruptive in the aftermath of Hurricane Maria in Puerto Rico. The island still struggles with an underperforming electric grid and widespread blackouts more than four years later. Leo Fitzpatrick, policy counsel at media advocacy group Free Press, said the disaster should have been the “wake-up call that should have been the arbiter” for change.

In light of the challenges posed by major storms, polling shows the public thinks there is room for both the government and telecom companies to do more to improve network resiliency during natural disasters. 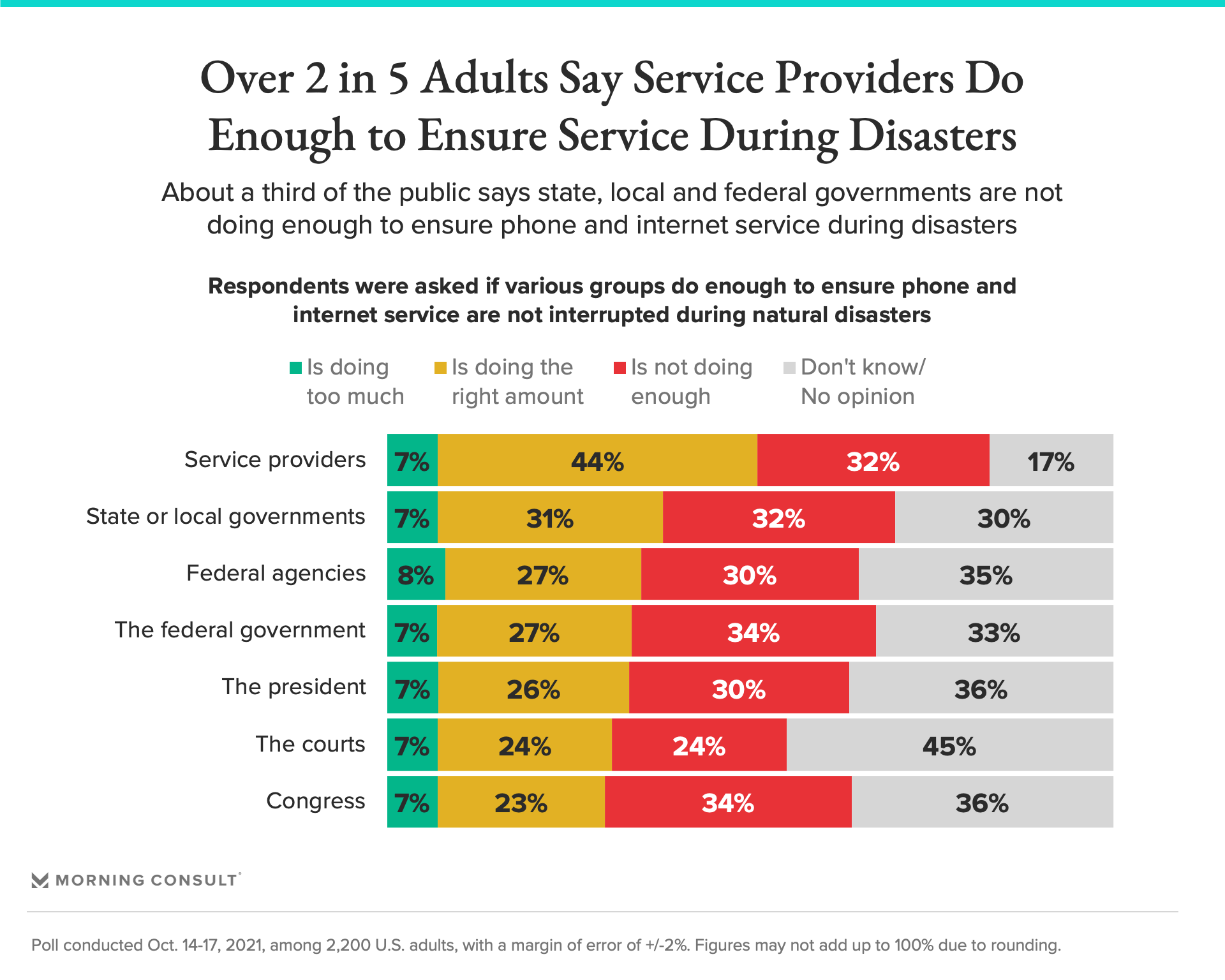 In a recent Morning Consult survey, a plurality of U.S. adults (44 percent) said telecommunications companies do enough to prevent service interruptions during natural disasters, though roughly a third said these companies’ efforts to safeguard service are insufficient. Respondents were less likely to say that resiliency efforts by the federal government and regulators constituted the right amount of action, though again, 1 in 3 respondents said government entities could do more.

Bolstering ties between the private and public sectors

The FCC review will also look at whether to strengthen the voluntary cooperation framework between communications companies, a framework developed by industry in 2016 that provides for wireless roaming and mutual aid during disasters.

The FCC could make sections of that framework mandatory in a bid to foster greater cooperation between providers, although Feld said that will require a change in mindset for profit-focused companies.

“This isn’t about punishing bad actors,” he said. “This is about making sure that everybody cooperates and everybody’s on the same page. And that’s going to be hard because carriers do not easily accept that having some kind of regulatory oversight to set these standards and provide these mechanisms for coordination is better than trying to do it themselves.”

However, the public seems more sanguine when it comes to whether these companies can make improvements to network resiliency. 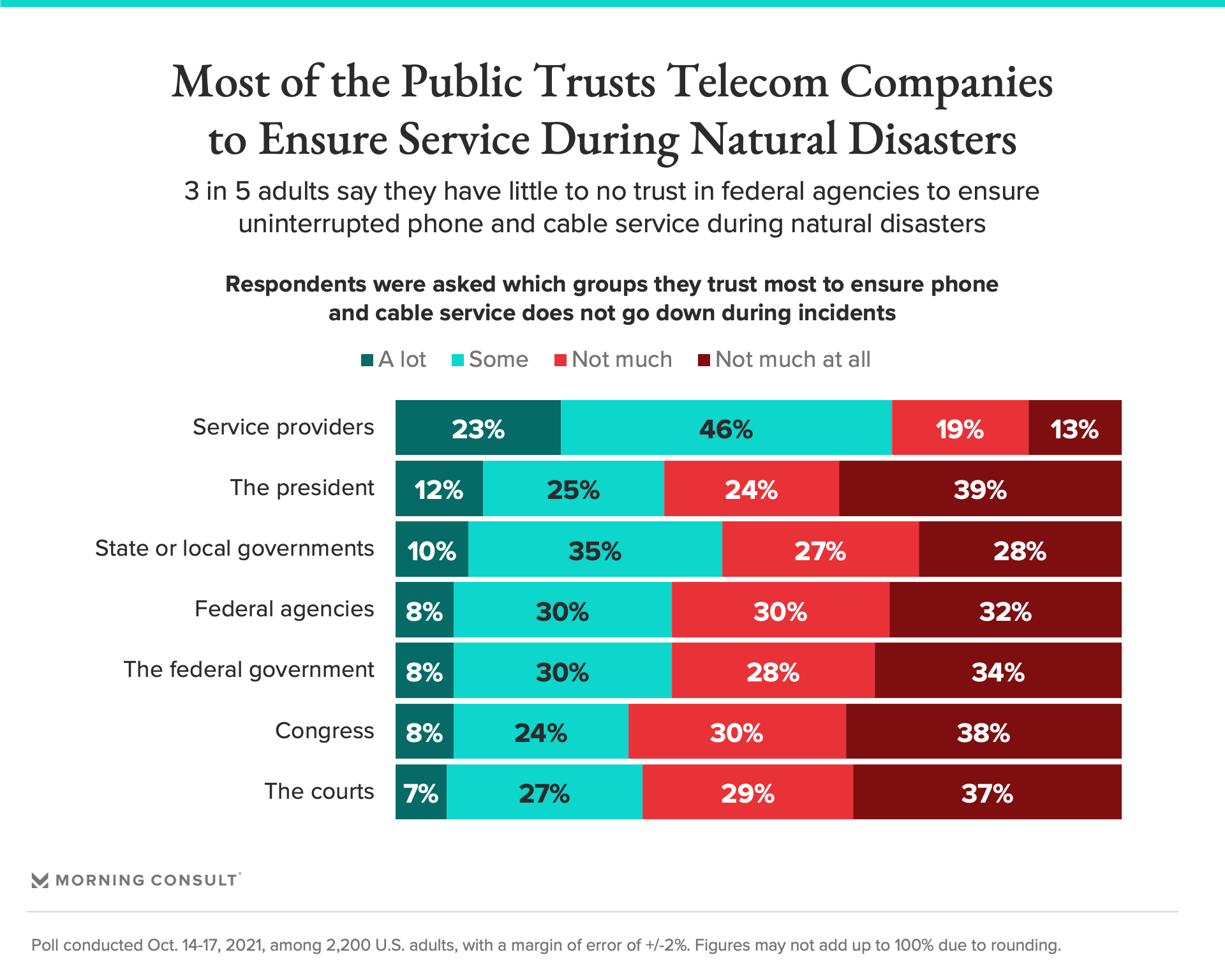 More than two-thirds of adults (69 percent) said in the Morning Consult poll that they have at least some trust in telecommunications companies to ensure uninterrupted service during natural disasters. That number is much higher than the share of respondents who said the same  for federal agencies (38 percent).

Among other solutions to improve resiliency during disasters, some have called for improvements to the nation’s 911 emergency call service, which often struggles to handle call volume and can be knocked out altogether during disasters. The transition to Next-Generation 911, led by the National Emergency Number Association and 911.gov, is expected to solve some of those issues by streamlining communication between agencies, improving the mapping of incidents and building in more redundancies.

“Our ultimate goal is for agencies to never be down, especially when it’s coming to 911 or their call-handling systems, because if we can’t receive the calls, we can’t do much,” said Ashlee Swilling, an account manager at public sector software provider CentralSquare Technologies.

The technology would help avoid issues like those that occurred during Hurricane Katrina, when one tandem switch that helped route 911 calls was out for 17 days as flooding prevented its fuel from being replenished. Thirty-eight 911 call centers also went down during Katrina, the FCC found.

Fitzpatrick said regulators must set a “federal floor” through the rule-making process so that wireless companies have at least a minimum standard they will be held to, noting that state-level deregulation of wireless companies and utilities could undermine resiliency efforts, as some state governments have less power to impose mandates on the companies to do what is needed in their states.

Related: The FCC Has Pledged to Update Its ‘Broken’ Broadband Mapping Process. Some States Are Starting to Go It Alone
Broadband/Connectivity Infrastructure Natural Disasters Tech Regulation