A Year Ahead of the Midterms, Suburban Erosion Has Driven Biden’s State-by-State Decline 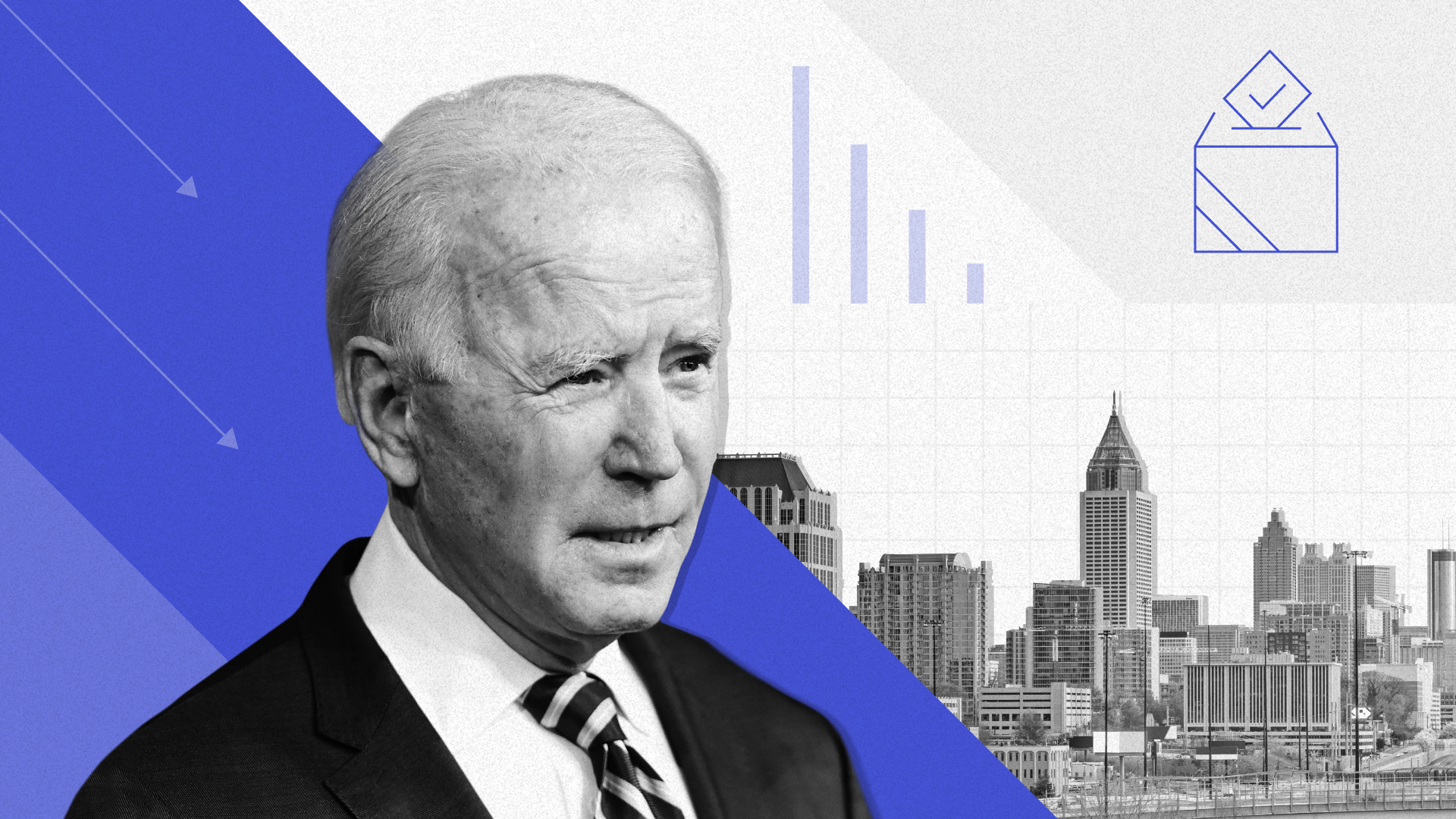 America’s suburbs helped fuel the Democratic Party’s electoral victories during Donald Trump’s presidency, but what these dense and educated enclaves giveth, they look primed to taketh away.

According to Morning Consult Political Intelligence tracking conducted this year in all 50 states, the erosion of support for President Joe Biden among suburban voters has driven the decline in the Democratic standard-bearer’s popularity across the map. These voters carry particular weight in states that will be key to Democrats’ chances of holding control of Congress after next year’s midterm elections, adding another hurdle to the already complicated work of holding the party’s slim majorities.

“He’s gotta go back up there, because what’s the alternative?” Democratic strategist Ian Russell said of Biden’s numbers in the suburbs. “He’s got to shore them up, or we’re going to have much bigger problems on our hands.”

In the average state, 44 percent of suburban voters approved of Biden’s job performance in the third quarter of his presidency, down 6 percentage points since his first three months in office, while the share who disapproved increased 8 points to 52 percent. Taken together, this marks a 14-point decline in Biden’s net approval rating in the suburbs that helped deliver Democratic victories over the past four years, from Virginia’s governorship in 2017 to the two Senate runoffs in Georgia early this year.

Tracking Biden’s Popularity Among Suburban Voters in All 50 States

Some of the largest drops in Biden’s suburban support came in Georgia, as well as Wisconsin, North Carolina, Ohio, Michigan, Florida and Pennsylvania — all of which feature prominently in the pending races to control the Senate or House.

The figures come from surveys in each state conducted from Jan. 21, Biden’s first full day in office, through Oct. 20. The responses are segmented on a quarterly basis to provide comparisons between states with larger and smaller populations. Across the map, the bulk of the decline came in the third quarter, as COVID-19 cases and inflation surged, U.S. forces chaotically completed their withdrawal from Afghanistan and congressional Democrats’ efforts to advance Biden’s agenda ran into Republican opposition or descended into infighting between progressives and moderates.

In most states, the change in sentiment about Biden among suburban voters largely tracks with the decline among all voters. It shows the weight the former group carries, especially in competitive 2022 battlegrounds for the House where candidates have a harder time forming their own brand and bucking national trends.

Tracking Biden’s Popularity Among Registered Voters in All 50 States

Among all voters, more approve than disapprove of Biden’s job performance in 18 states — mostly Democrat-friendly places such as California, Illinois, Minnesota and New York, as well as Virginia, all of which are likely to host competitive House contests. Biden’s net approval rating is underwater in 32 states, including narrow deficits in Nevada and Georgia and larger gaps in Florida, Pennsylvania, North Carolina and Ohio — which will all host decisive Senate races.

In New Hampshire and Iowa, which feature House and Senate contests next year, Biden’s net approval rating is above water in the suburbs but underwater among all voters, while he performs well among all Vermont voters despite his diminished standing in the state’s suburban communities.

The impact on the Senate map

When it comes to The Cook Political Report’s nine most competitive Senate battlegrounds, Biden’s net approval rating has fallen underwater in the suburbs of all states except New Hampshire since the first quarter of the year, tugging on his popularity in states that feature open-seat contests such as North Carolina, Ohio and Pennsylvania.

Biden’s suburban stumbles haven’t weighed down the most vulnerable Democratic senators to the same extent — apart from Mark Kelly of Arizona. 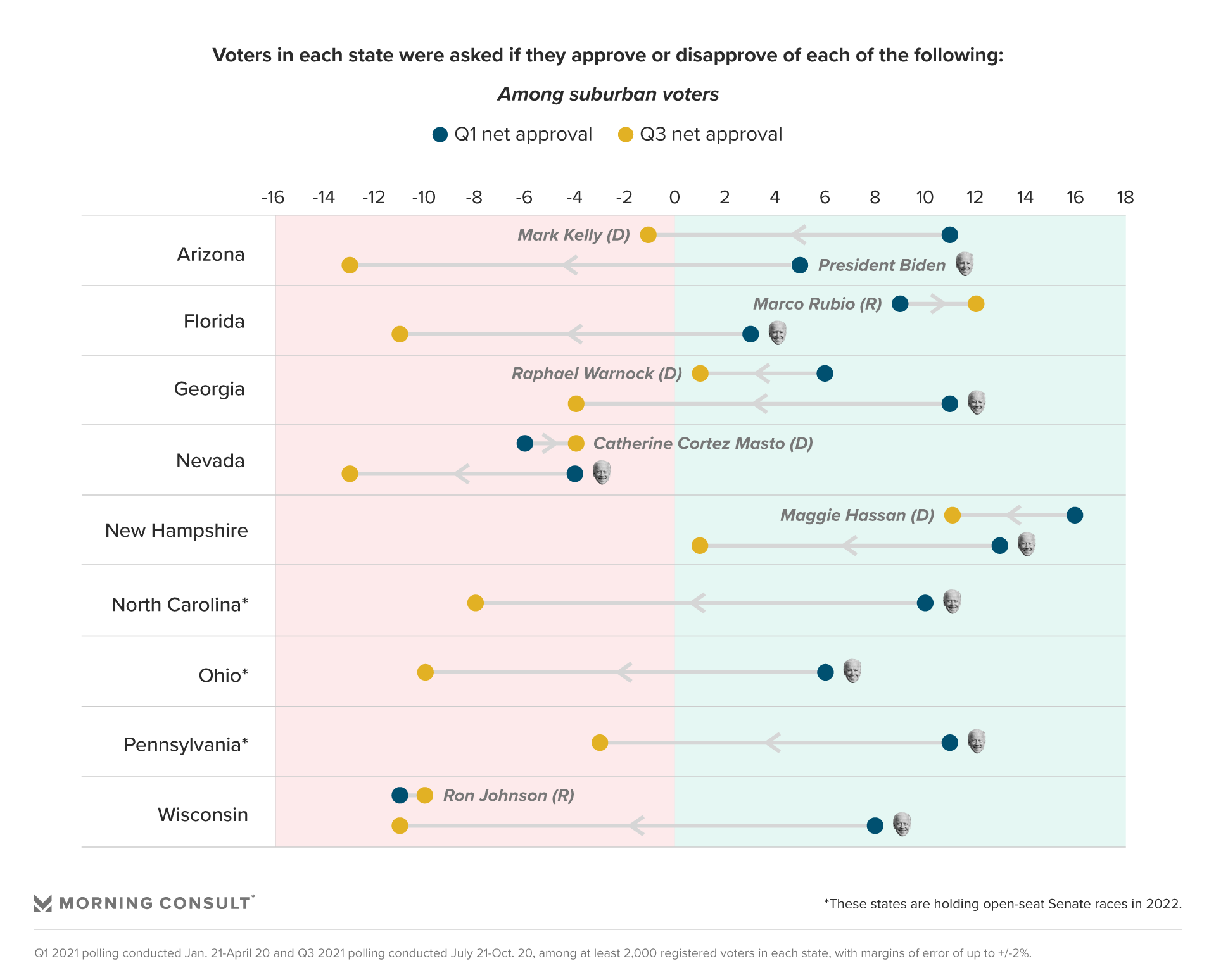 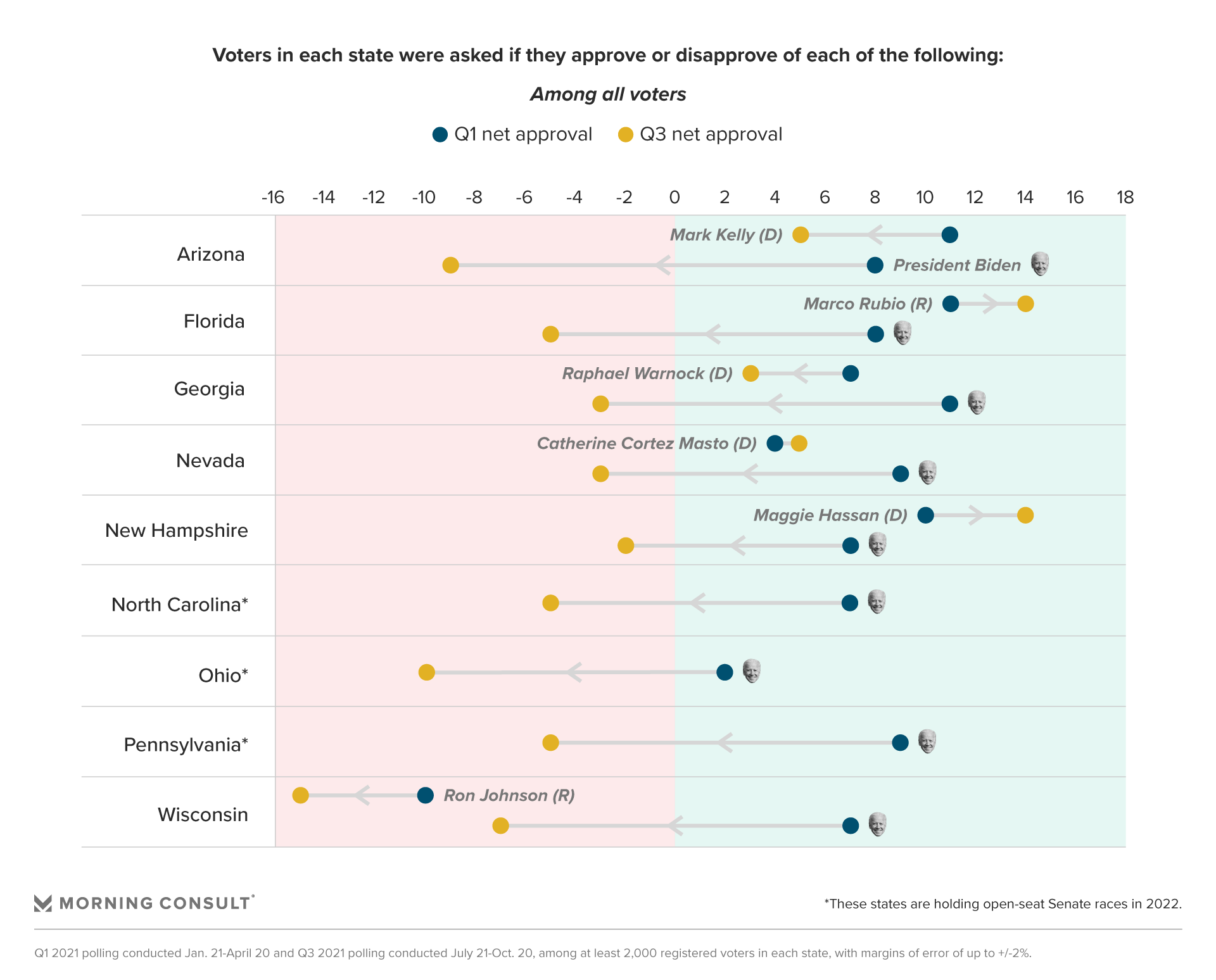 While 47 percent of all Arizona voters approve and 42 percent disapprove of Kelly’s job performance, his net approval rating in the Grand Canyon State’s suburban communities has dropped 12 points since the first quarter of Biden’s presidency. It marks the largest suburban decline for a vulnerable incumbent senator and coincides with an 18-point hit to Biden’s own standing in the state’s suburban communities.

The first-term senator’s drop is driven largely by an increase in the share of voters with unfavorable views rather than a decline in positive sentiment. According to the latest surveys, 44 percent of suburban voters approve of Kelly’s job performance (down 2 points) while 44 percent disapprove (up 9 points).

The ex-astronaut and husband of former Rep. Gabrielle Giffords (D-Ariz.) is a poster child for the benefits of the Trump-era political dynamics that gave Democrats a boost in suburban America last year. His Republican rival, appointed Sen. Martha McSally, tied herself closely to the president — repeating the mistakes of her 2018 Senate campaign despite Trump’s diminished standing in Arizona with voters in the suburbs who would go on to be decisive in Biden’s 2020 victory there.

Related: Biden Has an Enthusiasm Problem With Democratic Women

Despite the recent history, Jon Seaton, a Virginia-based Republican strategist who works on Arizona races, said he doesn’t see a “radical realignment” in suburban America against the Republican Party as a whole. Others have noted the GOP’s 2020 gains in the House that came alongside Biden’s win, and Seaton pointed to his own analysis in three competitive suburban state legislative districts in Maricopa County that found the Republican candidate outperformed Trump’s standing by more than 10,000 votes in each.

“They may not have been the type of people for whom Donald Trump would have a lot of appeal, but they’re still conservative, make a lot of money and don’t want their taxes to go up,” he said. With Trump out of the White House and Biden’s standing diminished, Seaton said Kelly and other Democrats across the country can’t “count on running up those kinds of margins in the suburbs” again.

Distancing oneself from a party’s weakened national brand is an almost impossible task in a midterm election cycle. Just ask Republicans who lost in 2018 when Trump was president, or the Democrats who got shellacked during former President Barack Obama’s first midterm election. But it’s made even harder when Democrats are relying on many of the voters who were persuaded to join the ranks due at least partly to animosity toward Trump.

“It’s hard to convince Republicans to vote for a Democrat. To keep the majority in either chamber we’re going to need to hang on to the right-leaning and moderate voters who came our way at some point over the last two cycles. But at the same time, we also desperately need to keep progressive voters motivated at a time they may not be,” said Democratic strategist Adrianne Marsh, who specializes in rural and red-state politics. “There’s nowhere that’s going to matter more than in suburban communities, where you get a little bit of everything.”

Some factors are largely outside of Democrats’ control. By the time next year’s general election campaigns are heating up, inflation, supply chain pileups and COVID-19 could be in the rearview mirror — but their effects could also linger. And in early 2020, nobody in professional Democratic politics thought the “defund the police” mantra would come to be associated with the party like it did in the aftermath of George Floyd’s killing by Minneapolis police, a reminder of the difficulty in forecasting the political environment one year out.

Issues with the party’s national image and uncontrollable challenges heighten the need for candidates to set themselves apart from partisan brands to help open gettable voters to the party’s persuasion efforts, Marsh said.

In terms of the broader political environment, there’s also the talk of Trump, whose abrasive rhetoric led to the Jan. 6 Capitol attack, as a still-looming threat. He’s helping Democrats cast him as a political bogeyman by insisting on staying in the fray with his endorsements and continuing to spread false claims about the integrity of the 2020 election, sparking some concern among Republican strategists.

Related: GOP Voters With Low Election Trust Are More Pumped for the Midterms Than Other Republicans

Paul Shumaker, a Republican consultant in North Carolina who has warned GOP officials against taking the sway of unaffiliated voters in his state’s growing nonrural counties for granted, said the more Trump injects himself into the midterms, the more he might fuel enthusiasm among Republican-friendly voters in rural communities. But on the other side of the equation, he said, Trump “may blunt some of the anti-Bidenism in the suburban areas.”

On top of all that, strategists for both parties said Democratic candidates need to work to make the president more admired over the next year by doing things that poll well and have an immediate, tangible impact. This adds urgency to enacting at least some of Biden’s “Build Back Better” agenda and then aggressively touting it and other Democratic victories to voters so they’re aware and know where they came from — something that’s been a challenge for the party on the popular temporary expansion of the child tax credit.

“When the government sends you a check, you know it. When your prescription costs go down, you know it. We have to do things to get money into people’s pockets before next year,” said Russell, who was an official at the Democratic Congressional Campaign Committee during Obama’s presidency.

“Voter sentiment starts to coalesce like wet cement in the election year, and by late summer it’s set and it’s difficult to change the trajectory of campaigns,” he added. “We need to do it and do it early enough.”

For Morning Consult’s state-level polling, weights are applied to each state separately based on age, gender, education, race, home ownership, marital status, presidential voting history and — for a subset of states — race by education as well as an age-by-gender interaction.

Margins of error for responses from all voters in each state range from 1 to 4 points, while margins of error for state-level responses from suburban voters range from 1 to 9 points. For more detailed information, you can download the 50-state datasets for Biden’s approval ratings among all voters here and among suburban voters here.