The U.S. Is Opening Its Borders Next Week. Most International Travelers Remain Reluctant to Visit

Hotels and airlines should prepare for international guests who are still hesitant about entering the United States, writes travel and hospitality analyst Lindsey Roeschke 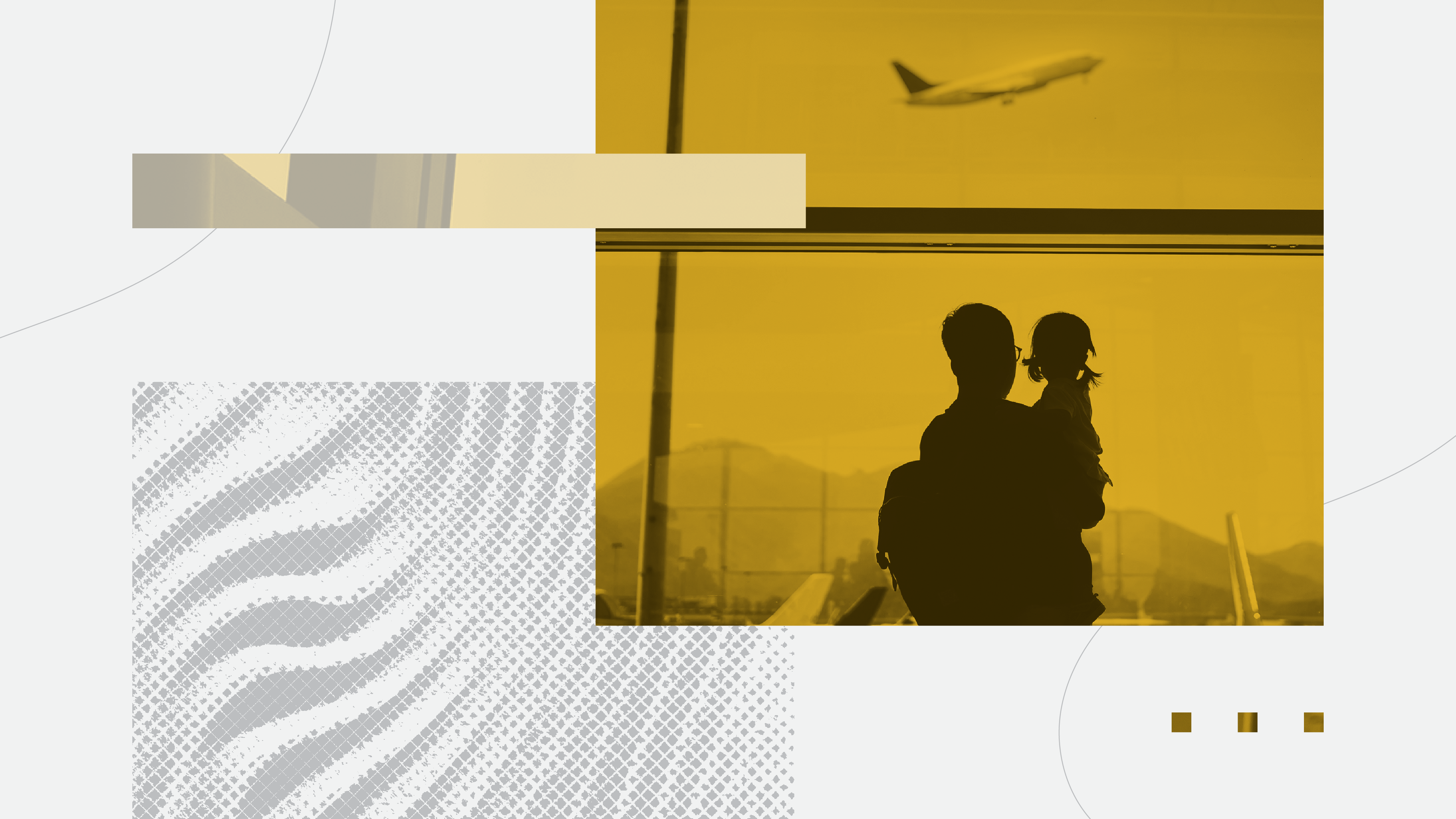 The return of even some travelers from abroad will be a boon to the industry, but travel and hospitality brands shouldn’t expect an immediate return to pre-pandemic levels. Most travelers will wait until at least summer 2022 to visit the United States, and are prepared for the possibility of new COVID-19 developments derailing their plans.

On Nov. 8, the United States will reopen its borders to international travelers for the first time in nearly 20 months. While there will be restrictions on incoming travel — with limited exceptions, visitors will have to provide proof of vaccination — the reopening represents a turning point for the travel industry. International travel spending reportedly decreased by 79 percent during the pandemic, with the United States last year seeing less than a quarter of the foreign visitors it had welcomed in 2019.

As global travelers prepare to visit the United States, Morning Consult surveyed consumers from 11 markets to understand how they may plan travel differently than they did before the pandemic.

Travel brands will see a boost in revenue from incoming travelers, but the biggest wave will come in summer 2022.

Travelers from key markets in the Americas — Brazil, Canada and Mexico — are the most likely to be certain about coming to the United States in the coming year, reflecting enduring hesitancy about long-haul travel. 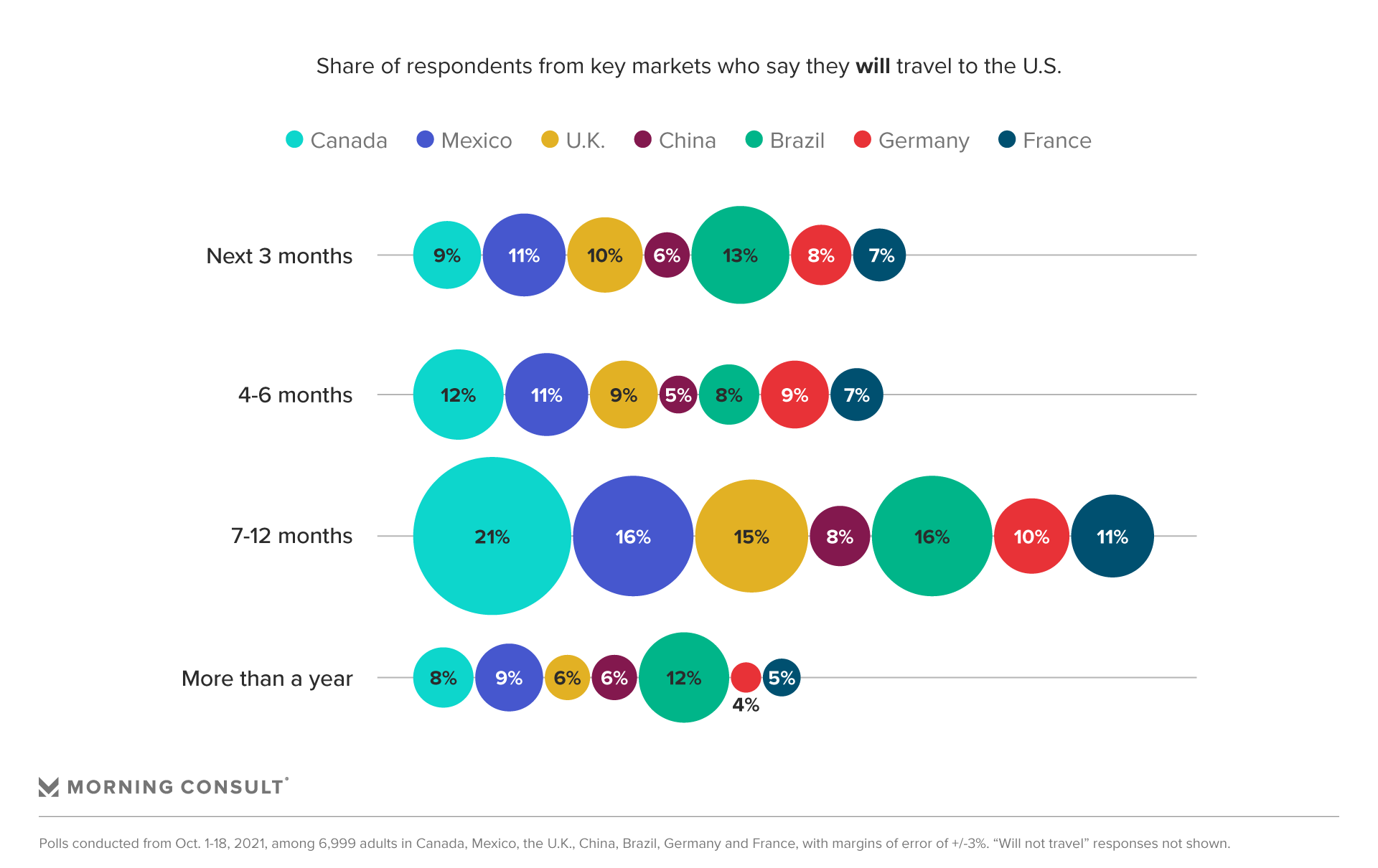 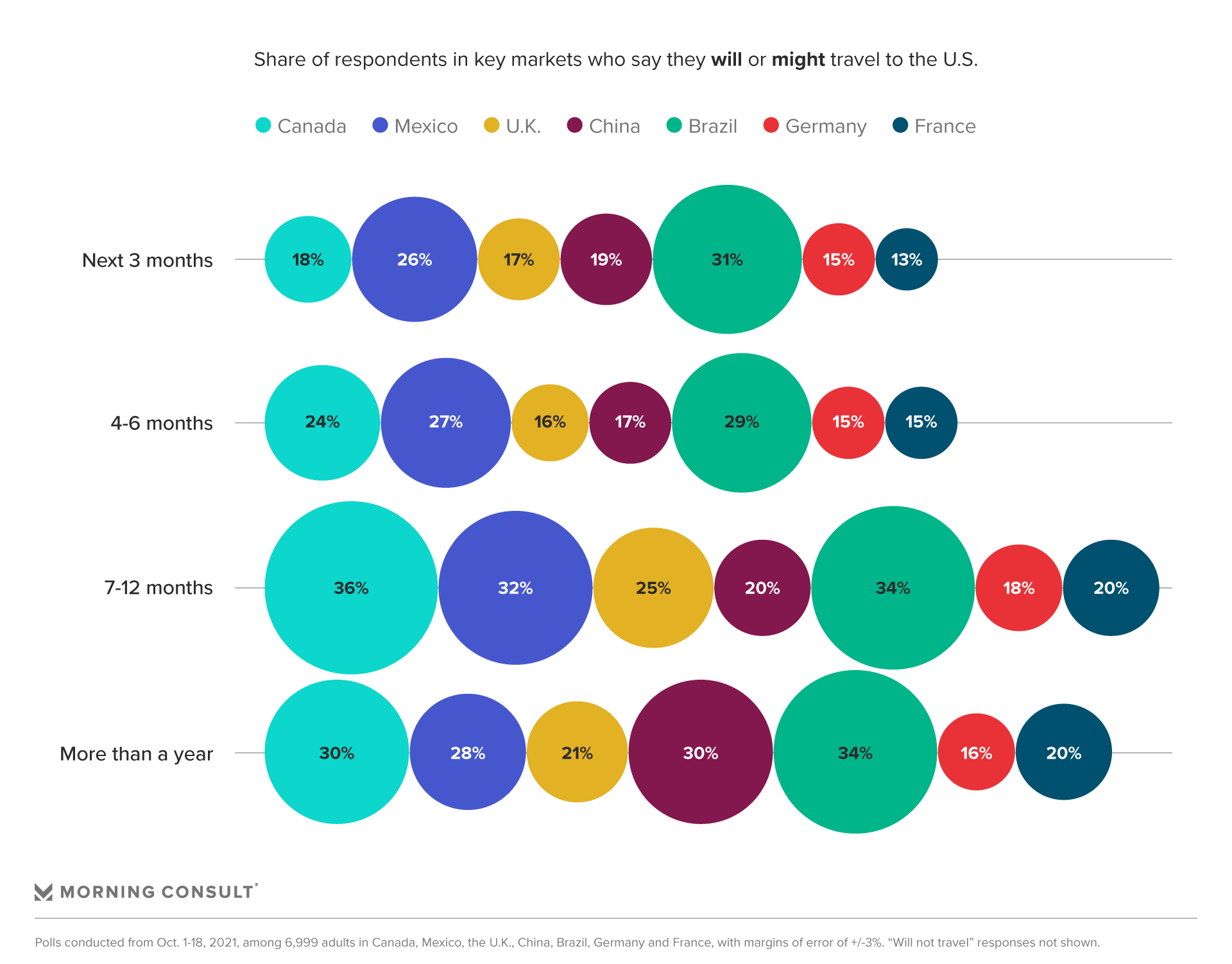 Inbound travel from China is the most uncertain, regardless of timeline, presenting a challenge for the industry. In pre-pandemic years, China represented the fifth-highest volume of international travelers to the United States. While Chinese respondents were fourth most likely among the seven countries to say they “will” or “might” travel to the United States in the next year, they were the least likely to say they “definitely” would.

Travel brands must be aware that while some of this is driven by restrictions in China, respondents in the country are also the most concerned about visiting U.S. destinations.

While many Americans remain conscious of regional ebbs and flows in domestic COVID-19 cases, inbound travelers are more likely to think of the United States as a monolith. 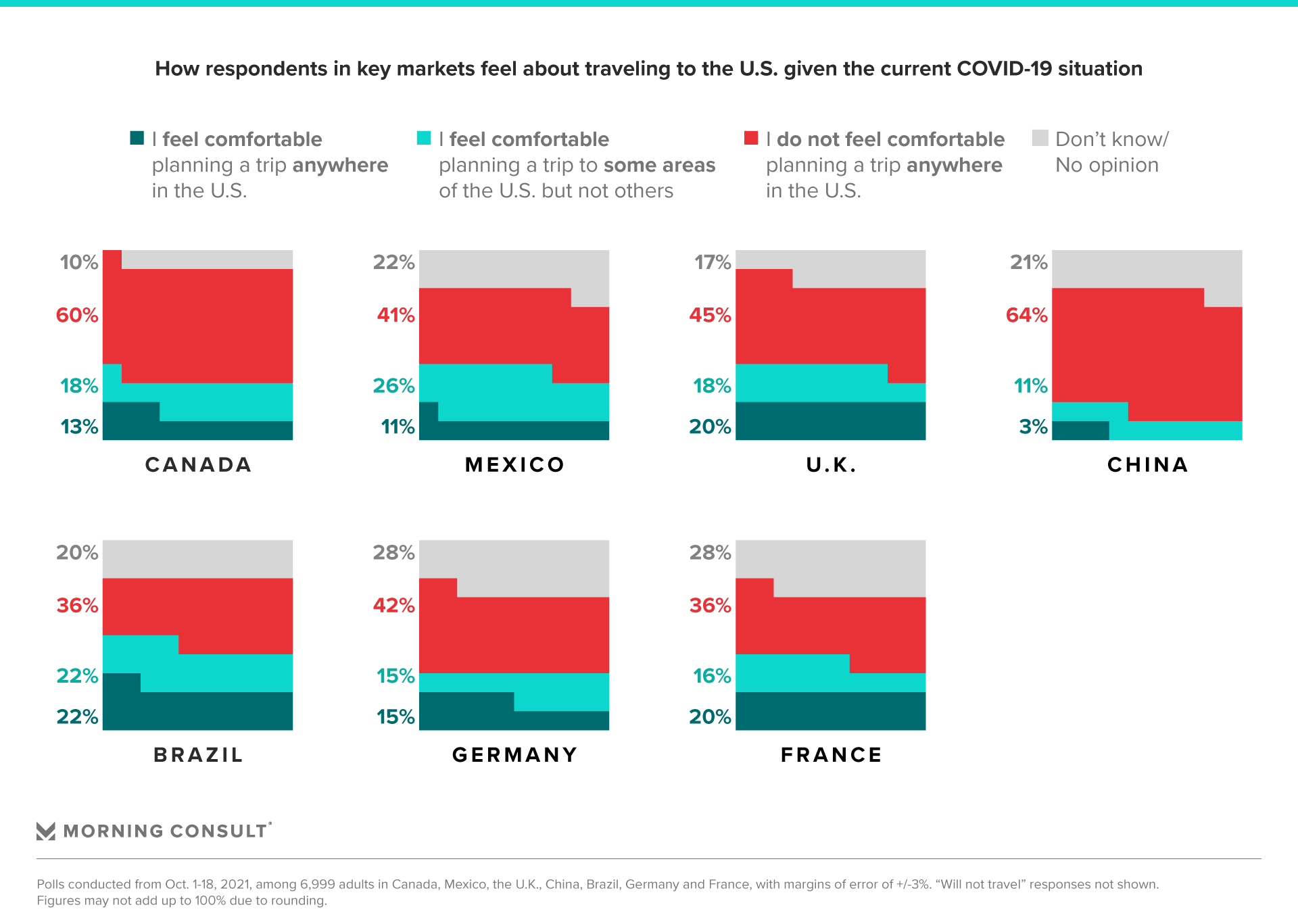 Across all countries surveyed, respondents were much more likely to say they don’t feel comfortable planning a trip anywhere in the United States than to say they are comfortable going to some areas but not others. Travelers from China and Canada, which together accounted for 30 percent of U.S. inbound travelers in 2019, express the most reluctance to visit the country.

As a result, international travelers are unlikely to divert their plans from regions or areas that have been hit hard by COVID-19, or that are experiencing spikes at the time of their trips, meaning destinations with a tight hold on the virus likely won’t be rewarded with a notably higher proportion of international traffic than in typical years.

Across all destination categories, international travelers are more worried about U.S. trips than domestic ones

Despite not associating certain areas of the U.S. with higher COVID-19 risk, international travelers express varying levels of concern depending on the type of destination.

These concern levels align closely with population or visitor density: Theme parks and big cities are the most concerning, followed by suburban destinations, small towns and rural areas. Notably, regardless of the type of U.S. destination, each is more concerning to international travelers compared with those in their home country. In other words, French travelers feel far less concerned about visiting Disneyland Paris than Disneyland in California. 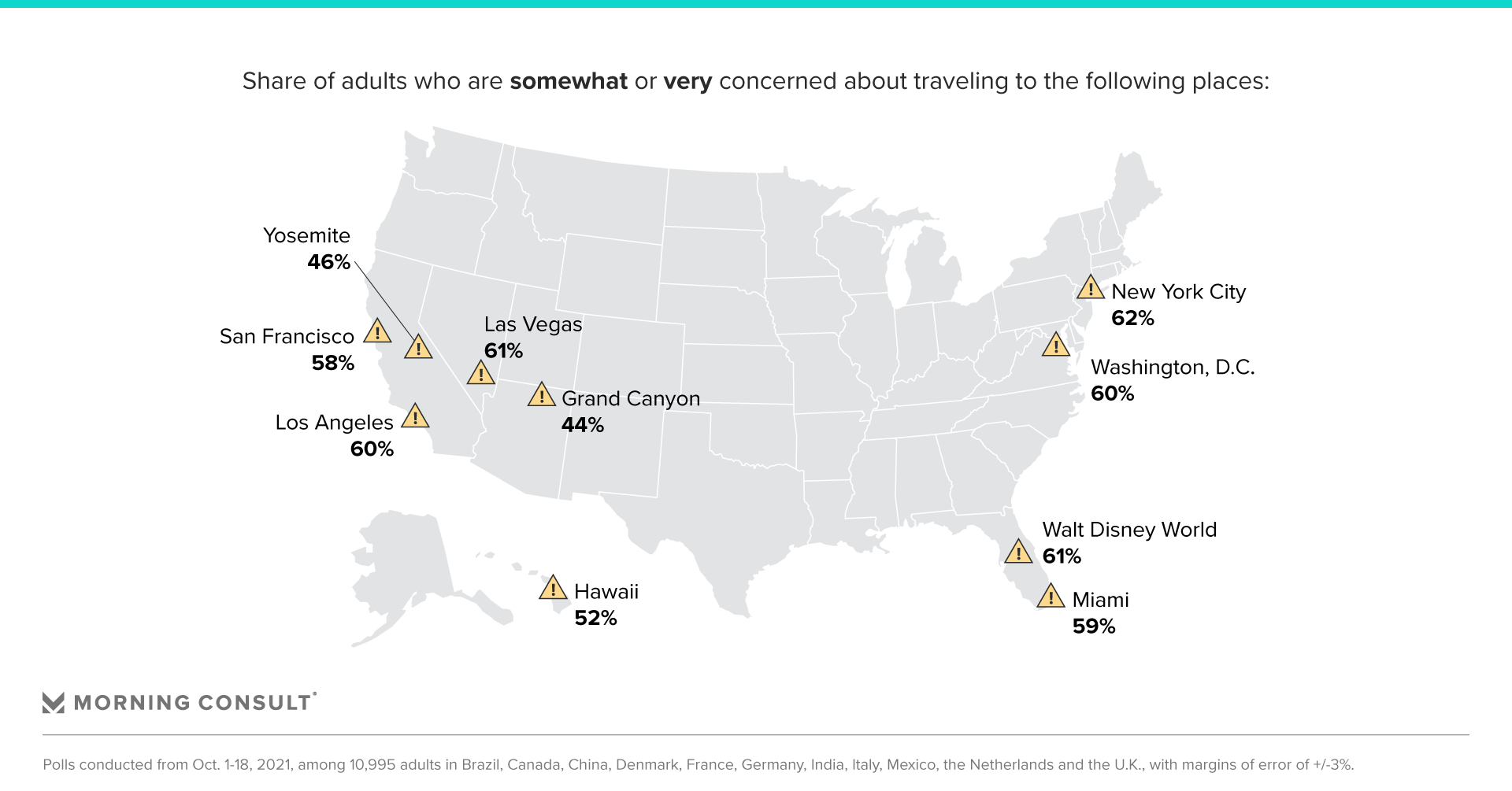 Concern disparities are also reflected in specific destinations in the United States. Among those that were most popular for international tourists before COVID-19, the most densely packed options, such as New York City, Walt Disney World and Las Vegas, are the most concerning, while areas that allow for more physical distancing, like Yosemite and the Grand Canyon, are the least.

Despite perceived risks, the most popular destinations will still draw the most international tourists

Generally, the most popular destinations in pre-pandemic years — New York City, Florida, California and Las Vegas — remain the most popular for upcoming trips. However, a small group of international travelers are considering other destinations. States with wide open spaces such as Texas and Montana accounted for several responses, and several travelers even shared their hopes of visiting more generic destinations like “Middle America” and “the countryside.” Despite the enduring popularity of traditional tourist spots, the cautious mindsets of international travelers represent an opportunity for off-the-beaten-path destinations to draw more volume.

No matter the destination, international travelers coming to the United States expect flexibility. When asked about potential coronavirus-related developments — for example, rising case numbers or new quarantine guidance — the vast majority said they would alter their plans in some way. In all cases, canceling the trip was the most common response, over rescheduling or rerouting. Most travel brands have recognized the need for flexibility over the past year and a half by instituting more generous policies — and now is not the time to pull back. Flexibility has become table stakes for travelers, especially those spending big on long-haul international trips. To avoid unwanted cancellations, savvy travel brands will continue to embrace flexibility and help international travelers navigate changing circumstances as the pandemic continues to disrupt even the best-laid plans. 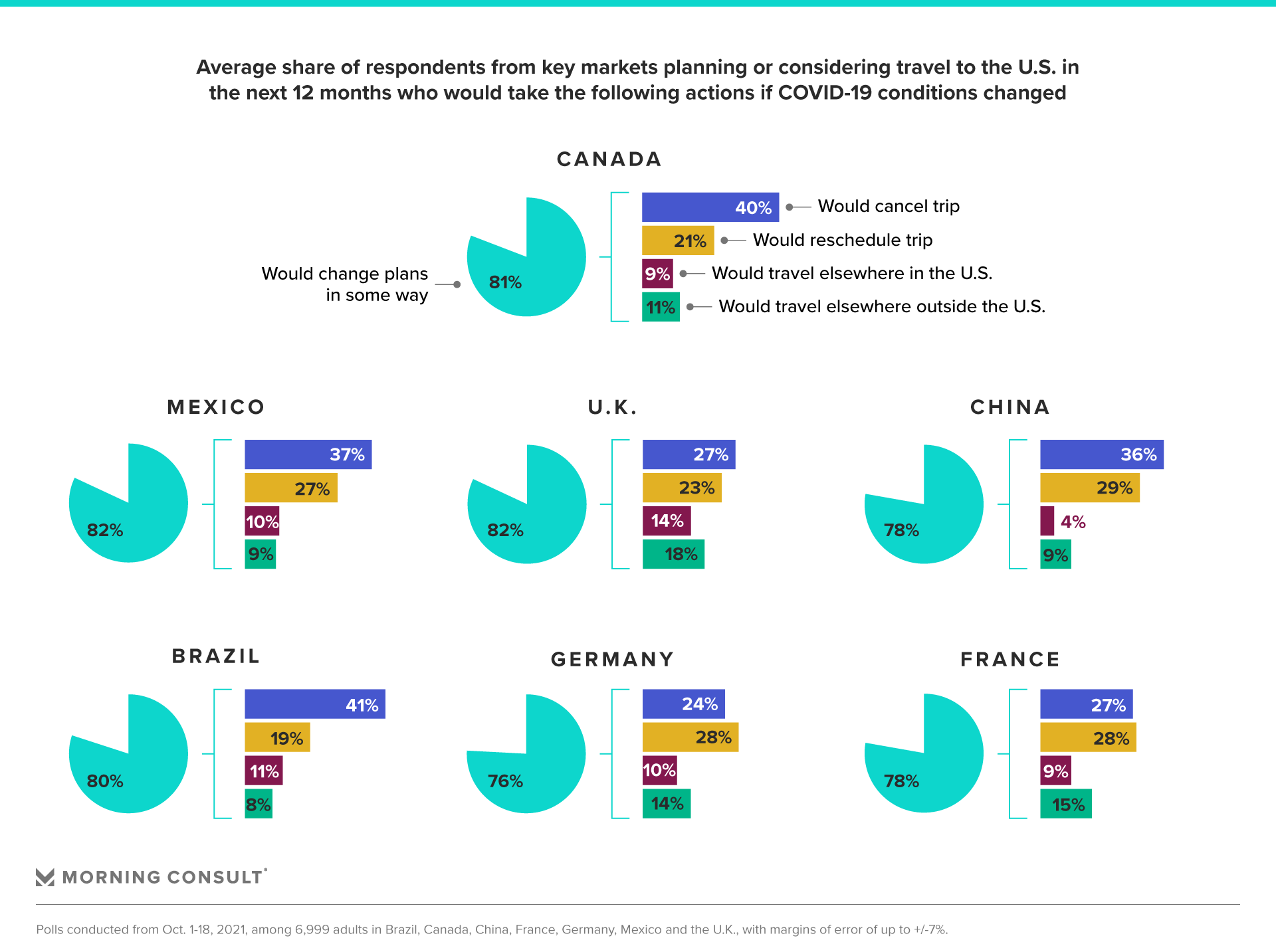