Republicans See Education as a Key Midterm Wedge, but Polling Shows They’re on Better Footing With the Economy 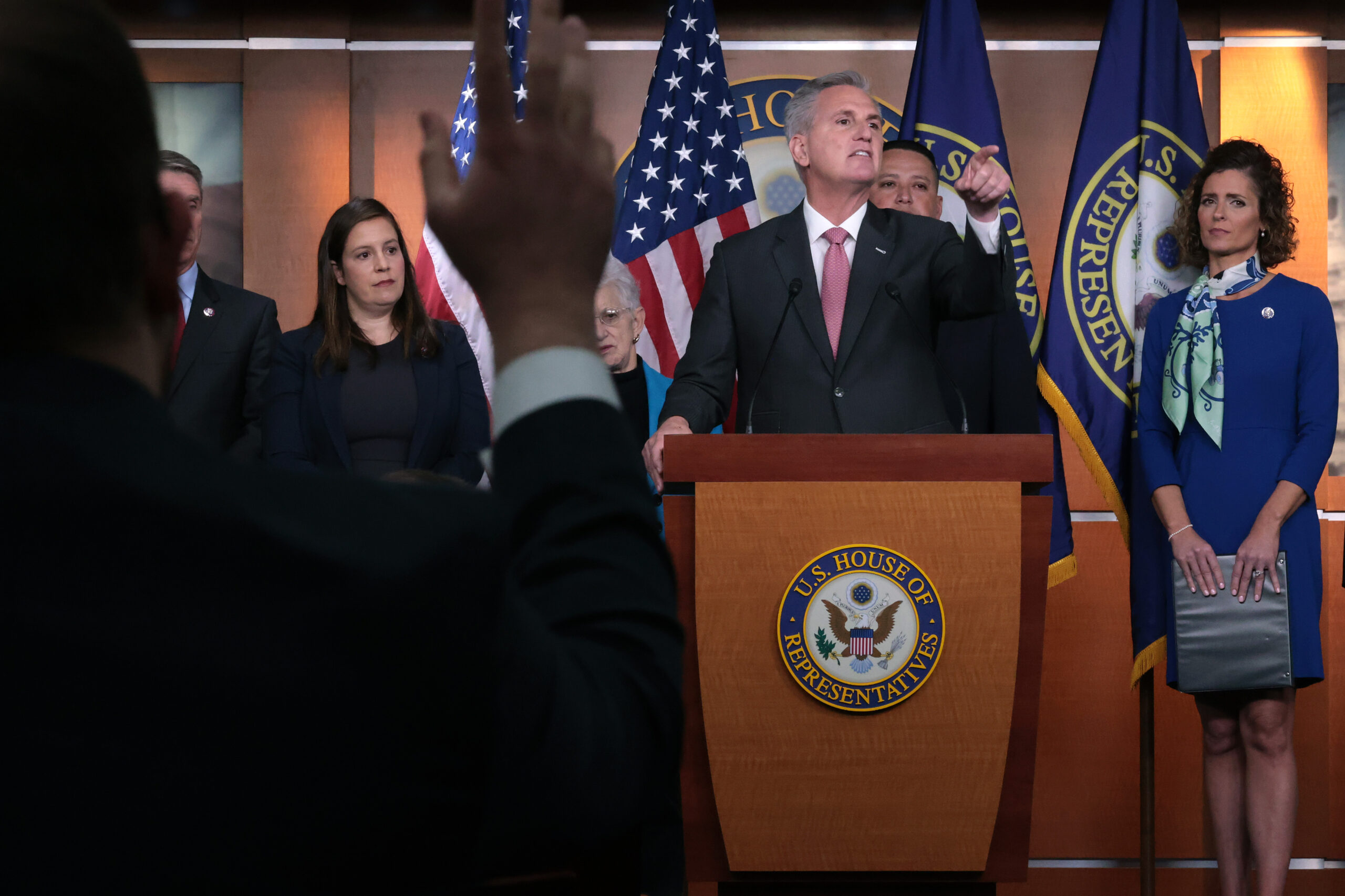 House Minority Leader Kevin McCarthy (R-Calif.) holds a Nov. 3 news conference to talk about Republican victories in the previous day's elections with members of the Virginia delegation. While the House GOP looks primed to tap deeper into education as a wedge issue ahead of next year's midterm elections, Morning Consult polling suggests more of a focus on the economy could reap more electoral rewards. (Chip Somodevilla/Getty Images)
By Eli Yokley

House Minority Leader Kevin McCarthy (R-Calif.) is looking to channel the energy around schools that the GOP has underlined as it touts its victorious showing in this month’s Virginia gubernatorial race, pushing for a “parents’ bill of rights” and declaring the GOP “the party of education.”

But when it comes to the fight over control of Congress, the decline in voter trust toward Democrats on educational issues looks to be part of a broader erosion rather than a specific topical advantage, according to Morning Consult/Politico polling, which shows that Republicans continue to sport one of their best advantages on voters’ top concern: the economy.

The latest survey, conducted Nov. 5-7, found that Democrats in Congress are still more likely to be seen as the party of education: 45 percent of voters trust them to handle that issue, versus 38 percent who trust congressional Republicans. Democrats have lost ground on the issue since President Joe Biden’s first month in office, but it’s not happening in a vacuum — and it doesn’t appear to be a catalyst for the broader declines in trust.

Share of voters who said they trust Democrats in Congress or Republicans in Congress more on the following issues:

Noneducation is made up of an average of the following topics: COVID-19, climate change, energy, gun policy, health care, immigration, jobs, national security, protecting Medicare and Social Security, the economy, the environment and voting rights.
Monthly averages of polls conducted in 2021 among roughly 2,000 registered voters each, with margins of error of +/-2%.

The downturn in voter confidence regarding Democrats’ handling of education – and the increased likelihood of trust in Republicans – largely tracks with voter sentiment on a dozen other issues, from the COVID-19 pandemic to immigration. The gap in trust on the average noneducation issue has swung 14 percentage points in the GOP’s favor since January (roughly matching the change on education), with the bulk of the movement coming after April, when Democrats were benefiting from Biden’s strong first 100 days.

The near uniformity of the change in public opinion about Congress, in addition to a late summer decline in sentiment about Biden’s job performance, suggests voters nationwide may not be reacting to a particular issue, but are instead offering a thermostatic response to the status quo in Washington: Because Democrats have full control of Congress and the White House, public opinion and its electoral benefits are swinging away from the party — just like they did four years ago when Republicans were in charge.

In the latest survey, congressional Democrats’ average 3-point trust advantage on all 13 issues is roughly in line with their standing in the generic ballot, which found Biden’s party leading the GOP in Congress, 44 percent to 42 percent.

Share of voters who said each of the following is their top set of issues when voting for federal office:

“Other” label includes those who prioritize birth control, abortion, equal pay and energy issues.
Monthly averages of polls conducted in 2021 among roughly 2,000 registered voters each, with margins of error of +/-2%.

While Republicans have used former private equity executive Glenn Youngkin’s successful gubernatorial campaign in the Old Dominion as evidence that they should lean into education as they seek to unite a coalition of Donald Trump acolytes and Trump-weary suburbanites, the data shows economic concerns have, and continue to be, the electorate’s most pressing concern.

The most recent polling found 39 percent of voters say the economy is their top issue when thinking about their vote for federal office, while just 4 percent say it’s education, mirroring perceptions among suburban voters. Both figures are roughly in line with where they have been throughout Biden’s presidency.

That issue, which is not unique to the commonwealth, appears to be prime territory for Republicans nationwide to tap into the concerns among the overall electorate, as well with the suburban voters who have driven the decline in public sentiment about Biden’s presidency.

Republicans Perform Better Than Democrats on Economic Issues, Particularly in the Suburbs

Share of voters who said they trust Democrats in Congress or Republicans in Congress more on the following issues:

According to the latest survey, roughly half of voters (48 percent) trust Republicans more to handle economic issues, while 38 percent have faith in the Democrats. Nationwide, Republicans in Congress have gone from a 5-point trust deficit on economic issues to a 10-point trust advantage over the Democrats since Morning Consult/Politico polling conducted in January, with most of the movement coming over the past few months.

The GOP’s advantage with the overall electorate on the question is exceeded by its standing with suburbanites, who trust Republicans over Democrats on the economy by a 16-point margin, 51 percent to 35 percent.

Related: How Republicans Facing Re-Election, With or Without Trump’s Backing, Are Faring Among Their Bases
2022 Elections Congressional Politics Trust