With Holidays Around the Corner, Biden’s Inflation Problem Is About to Get Worse

Almost 9 in 10 voters say they’re at least somewhat concerned about inflation, and over half disapprove of Biden’s handling of the economy 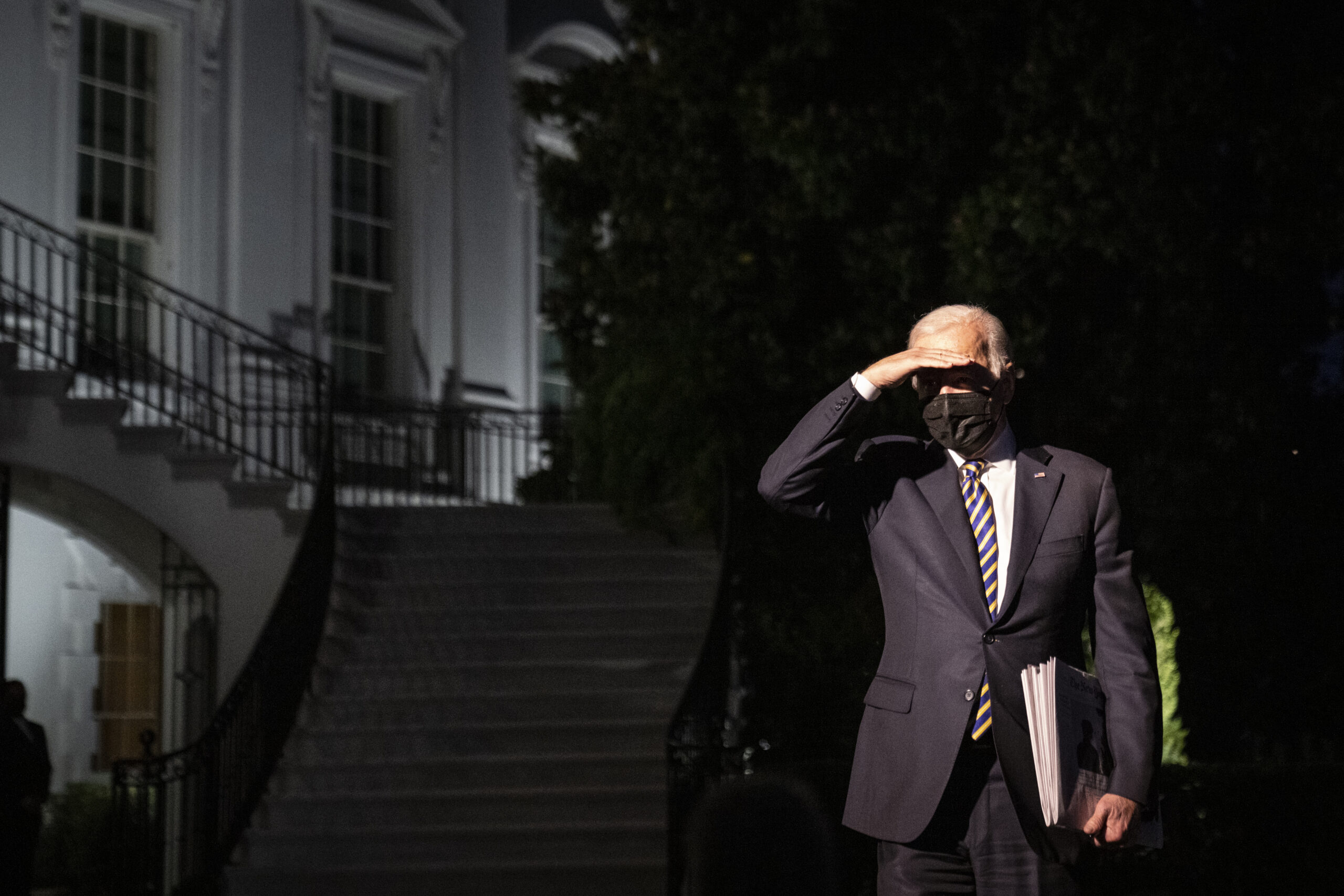 President Joe Biden takes questions from reporters as he exits the White House on Nov. 12, 2021, in Washington, D.C. A Morning Consult/Politico poll found that 53 percent of registered voters disapprove of Biden’s handling of the economy, tying a record low. (Drew Angerer/Getty Images)
By Claire Williams

Democrats are in deep trouble when it comes to the economy, and a potentially expensive holiday season could make matters worse.

For Republicans, the message is simple: Families are hurting because of rising prices, and all Democrats want to do is spend more. And that message seems to be getting through: President Joe Biden’s disapproval rating on the economy hit 53 percent this week, according to a new Morning Consult/Politico poll, matching a record high set two weeks ago.

“All politics is local, and it doesn’t get more local than the prices that families are paying at the local grocery store each day,” said Calvin Moore, communications director for the Republican-backed Congressional Leadership Fund political action committee. “There’s this feeling that people are doing all the right things, they’re working hard, they’re getting raises, but their lives aren’t getting any better.”

Overwhelmingly, voters are concerned about inflation, which hit a three-decade high last month: 87 percent said they are “somewhat” or “very” concerned about rising prices, according to the new survey. 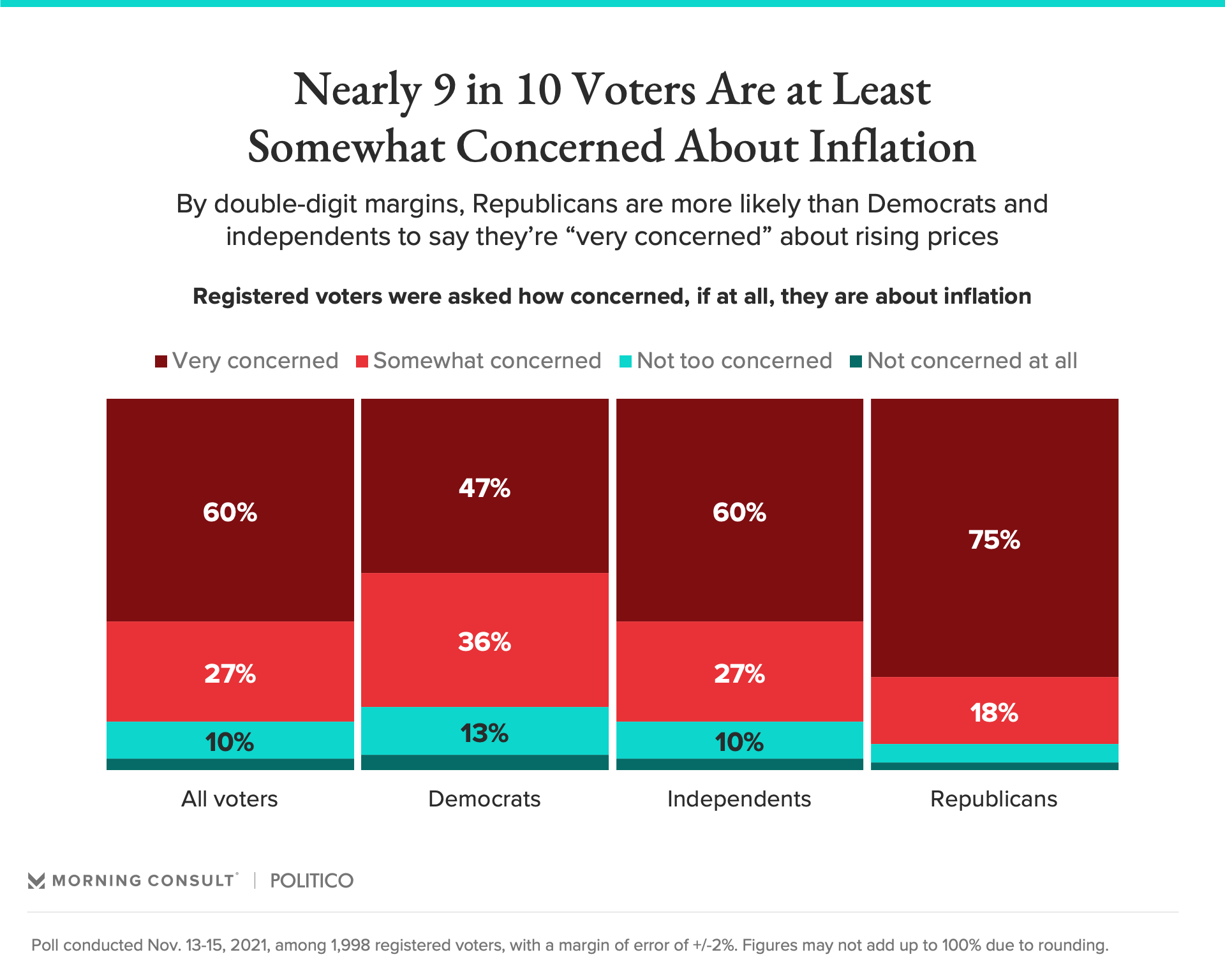 While Republicans are more likely to be worried at 93 percent, a significant majority of Democrats (83 percent) are also concerned.

The political toll inflation could take on Democrats

Democrats looking toward the 2022 midterms are in a trickier spot than Republicans. For months, the White House has insisted that inflation is “transitory” and that infrastructure and economic spending plans will help the middle class. But that pitch doesn’t seem to be resonating with voters.

Some parts of the economy are doing surprisingly well so soon after the economy ground to a halt during pandemic lockdowns, but it’s difficult to pitch benefits like soaring housing values and stock market growth to voters whose budgets are hurting because ground beef is more expensive. 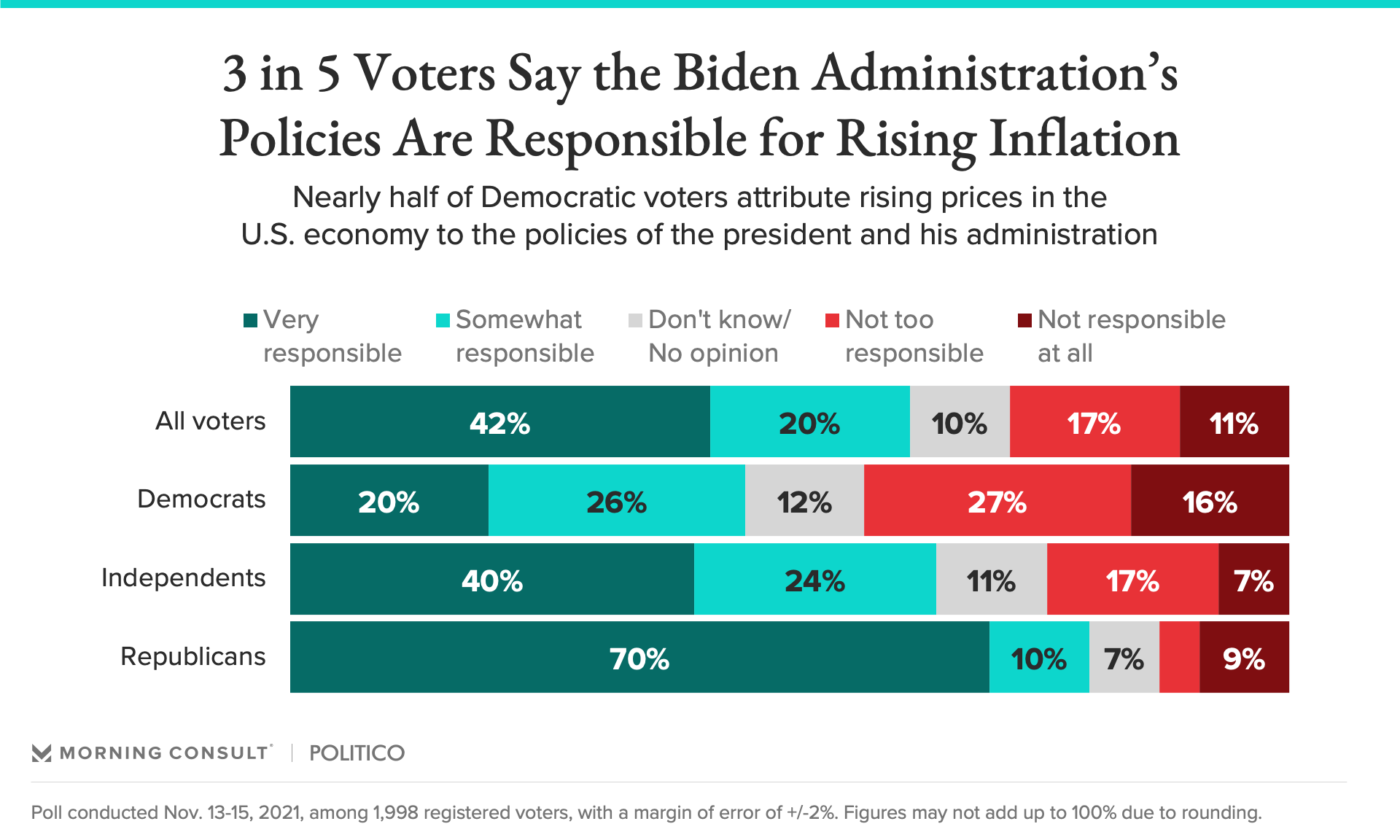 Over the past few weeks, White House officials have done a flurry of interviews and television appearances in an attempt to cushion some of the inflation blow.

Democrats are pitching their infrastructure spending plan and Biden’s “Build Back Better” agenda as ways to directly help the middle class and tamp down on inflation — a push that comes as the president this week saw his approval rating fall to a record low (44 percent) and his disapproval rating reach a new high (53 percent) in Morning Consult/Politico tracking.

Despite those economic messaging efforts, public opinion on inflation has remained even: In the new survey and in a mid-October poll, the exact same share of voters (62 percent) blamed rising prices on the Biden administration’s policies. The share of voters who held a return to pre-pandemic behaviors responsible for inflation was relatively unchanged at 46 percent.

Democrats will likely feel the heat to pin down messaging on inflation in the next couple of months. Debate around rising consumer prices is likely to intensify around the holidays as families gather after roughly two years of COVID-19, Democratic strategists pointed out. Costs to travel, buy food and even heat homes are probably going to be higher, and items might be missing or hard to find on grocery store shelves.

“Forget politics — it’s not an ideal scenario if you can’t afford a turkey or can’t find your canned pumpkin at the grocery store this year,” said Adrienne Elrod, a longtime Democratic strategist who served as director of strategic communications for Hillary Clinton’s presidential campaign.

That fear of rising prices is something Americans are already feeling. 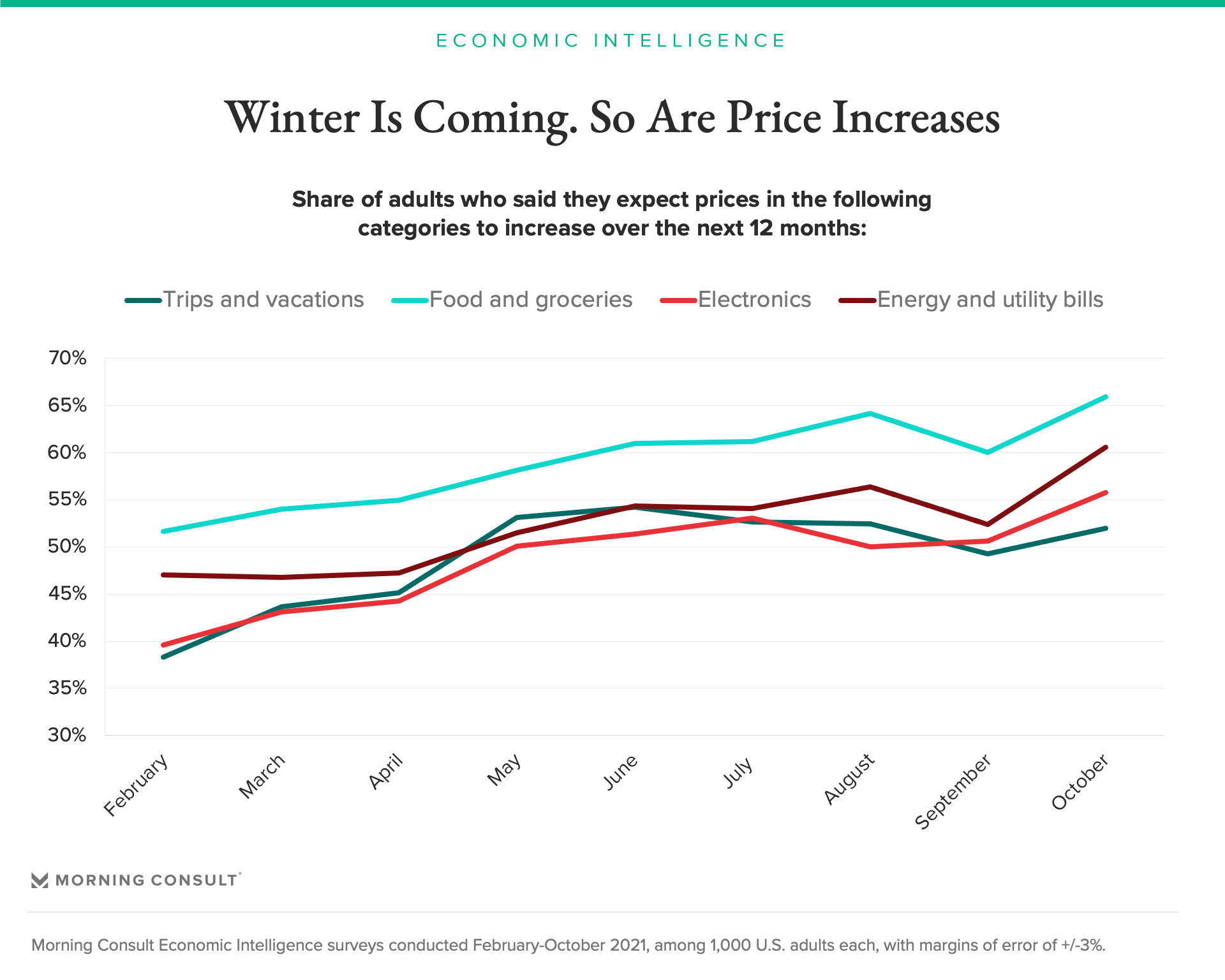 Consumers increasingly expect prices for trips, food, electronics and energy bills to climb over the next 12 months, and there’s a particularly steep incline from September to October, per Morning Consult Economic Intelligence data. Sixty-one percent of U.S. adults, for example, now anticipate higher costs for energy and utility bills over the next year, compared to 47 percent who said the same in February — a 14-percentage-point increase.

Of course, the 2022 midterms are still a year away, and the economic situation could be very different then. Voters are pessimistic, but more important is the lasting impression the Biden administration makes on handling voters’ concern about it, strategists say.

Gabe Horwitz, senior vice president of the center-left think tank Third Way’s economic program, said that Democrats now have the opportunity to tout their infrastructure plan, which is generally popular (50 percent of voters support the bill, which Biden signed into law Monday).

Horwitz said the party should refocus discussions on the economic spending plan away from the topline spending number and toward policies that benefit people, and show that the Biden administration is addressing supply chain issues.

“They need to convey to voters that they understand the problem and are taking action,” he said. “This is an issue with the Biden administration: We pass what’s very good policy and we don’t talk about it enough or long enough. And for voters who are thinking about 8,000 other things, they need to hear it simply and repeatedly over a long period of time.”