Momentum for Biden Administration Ahead of Senate’s Build Back Better Talks: Most of the Public Is Supportive of COP26 Climate Pledges 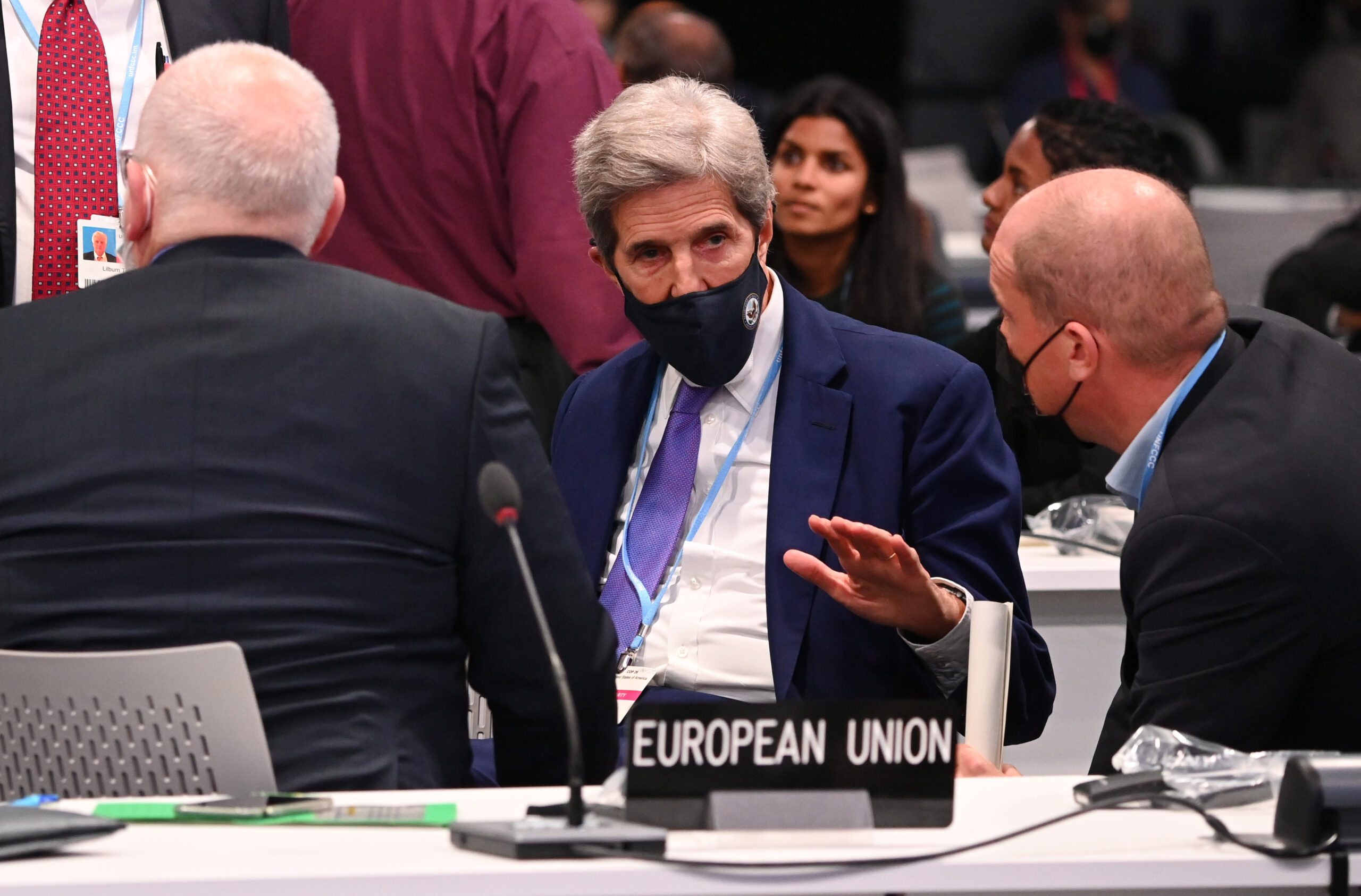 John Kerry, the U.S. presidential envoy for climate, negotiates during COP26 on Nov. 13, 2021, in Glasgow, Scotland. A Morning Consult survey found that 22 percent of U.S. adults think Kerry has done enough to combat climate change, while 36 percent said he has not. (Jeff J Mitchell/Getty Images)
By Lisa Martine Jenkins

By some measures, COP26 was a success: Major international agreements on a range of topics moved the ball forward on climate action, albeit not as aggressively as many would have liked.

As the dust settles, the public approves of the deals struck during the two-week summit, with majorities in support of various international and U.S. pledges, per a new poll from Morning Consult. But still, the shares that believe the parties involved have done enough to combat climate change are slim.

This combination of public support for broader climate action and the apparent desire for more potentially bodes well for President Joe Biden’s climate ambitions back home.

Now, the Biden administration’s task is not only to cement public buy-in, but also to nail down legislative backing. The summit took place as Congress ironed out the details of both the infrastructure bill, which Biden signed into law on Nov. 15, and the climate-heavy Build Back Better package. The latter includes a historic U.S. investment of roughly $555 billion in funding for climate efforts — such as tax incentives for renewable energy producers and electric vehicle buyers, as well as funding for grid resilience and energy efficiency — and passed the House on Nov. 19.

Climate change “isn’t, strictly speaking, a public opinion problem,” said Nikos Tsafos, who oversees an energy security and climate change program at the Center for Strategic and International Studies. “The infrastructure bill makes some modest changes, but the country needs something like the Build Back Better Act to have any chance of cutting emissions by half relative to 2030. Even then, it will be a stretch.”

Good news for the Biden administration: COP26 pledges are popular with the public

Over the course of the summit, negotiators ostensibly logged several wins for climate action, including agreements to halt deforestation and reduce methane emissions.

Respondents were asked if they approve or disapprove of the following international commitments made at the COP26 climate summit:

A majority of U.S. adults said they support some of the more prominent agreements, even those that the United States did not endorse, like the pledge by more than 40 countries to stop the use of coal for power domestically. The agreement to stop deforestation by 2030 was the most popular, with 67 percent of adults approving.

U.S. climate envoy John Kerry wrote in The Wall Street Journal this week that “a gap remains” between the international community’s ambitions and actions on climate change, though the pieces are in place to stave off its worst effects: “it’s progress — if we can keep it,” he noted.

And Seth Schultz, currently chief executive of the global infrastructure advocacy group The Resilience Shift and previously a lead author on the Intergovernmental Panel on Climate Change’s 2018 Special Report on 1.5 Degrees, said that this year’s COP was a “success” in terms of its engagement of businesses and other non-governmental actors willing to operate on the frontlines of climate change.

Biden, Kerry, former President Barack Obama and former Vice President Al Gore all attracted high levels of media coverage for their appearances at the summit, Schultz said. And from that influence came commitments, “and Biden’s role in the re-engagement of the U.S. in the global climate agenda has been greatly welcomed from across the debate.”

At the summit, Biden recommitted the United States to certain climate goals that his administration has made tentpoles of its policymaking over the course of 2021: cutting greenhouse gas emissions 50-52 percent below 2005 levels by 2030, as well as achieving both a carbon pollution-free power sector by 2035 and a net-zero economy by 2050.

Respondents were asked if they approve or disapprove of the following climate goals President Joe Biden recommitted to at COP26:

At least 3 in 5 adults approve of the administration’s goals of cutting emissions by at least 50 percent by 2030 (roughly the same share who said the same when the pledge was introduced in April), and of creating a carbon emissions-free power sector by 2035. The broader goal of a net-zero economy by 2050 was only slightly less popular, at 54 percent.

Slightly more contentious — or at least more nuanced — is the public’s reaction to the United States’ decision to sign onto the international pledge to stop the public financing of fossil fuel projects abroad, but not onto the one to stop the use of coal power domestically.

Respondents were asked their views on coal policy after the U.S. signed an international pledge to stop financing overseas coal projects but declined to commit to suspending domestic coal use

In an apparent rebuke of the administration’s approach to coal as reflected by the summit, 36 percent of U.S. adults said the country should stop the use of coal at home and stop funding its use abroad. Meanwhile, 19 percent said the Biden administration has had the right approach in continuing the fuel’s use at home, but stopping its funding abroad.

Despite popularity of climate plans, Biden faces a public skeptical of the progress so far

But despite these commitments declared over the course of the two-week conference, most of the U.S. public is unconvinced that the finish line is within reach.

Respondents were asked if each of the following has done enough to combat climate change and its impacts:

Biden and the United States as a whole were the only options that over a quarter of respondents said have “done enough to combat climate change,” at 28 percent and 26 percent, respectively. Asked about other countries and international bodies specifically — including Brazil, Saudi Arabia, the European Union, the United Kingdom, India and Russia — over 40 percent of respondents said they did not know or have no opinion on whether they have done enough.

And when the international community is taken as a whole, respondents have little faith. Sixty-two percent said “the world” has not done enough to combat climate change, followed closely by China (57 percent) and the oil and gas industry (56 percent).

This sense of dissatisfaction was reflected in the public’s sympathies for protesters — and especially the youth protesters —  that demonstrated at COP26 and internationally during its duration, arguing in broad strokes that global leaders have not done enough. The survey found that 52 percent of U.S. adults approve of the protesters’ actions, and 25 percent disapprove.

These sympathies reflect in turn the public’s overall approach to climate change, an approach that Tsafos said has evolved over time as the phenomenon becomes more divisive: a fact that will be on display as the Senate takes up the Build Back Better plan and lawmakers likely make significant changes.

“What passes for ‘decisive action’ has changed,” he said, citing both science and “chronic inaction” as causes for that change. “Given the political constraints under which the United States operates, the most important measure the administration can take to demonstrate its seriousness on climate is to spend a lot of money accelerating the energy transition.”