America Is Experiencing a Biden Bump Abroad, but It’s What Allies Fear That Matters Most

Positive perceptions of the United States in nine ally and partner countries have jumped in 2021, but fears of common threats are what bind America’s alliances 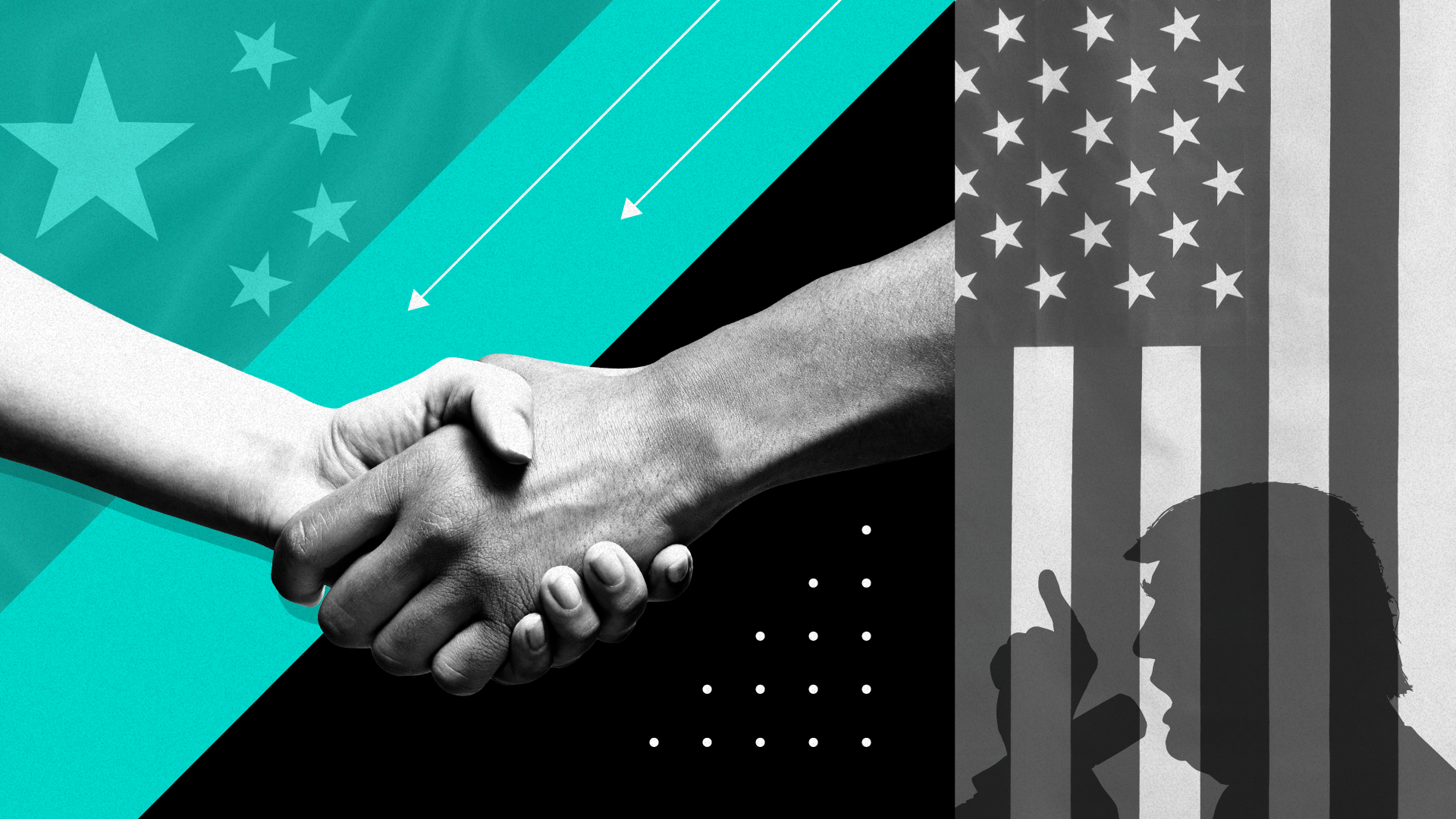 Every single day, Morning Consult is polling in more than 40 countries across the globe, addressing a growing need for real-time intelligence on the consumer, economic and geopolitical trends reshaping our world. Be on the lookout in 2022 for our new tool that continuously tracks what adults in each of these countries thinks about their global peers.

President Joe Biden came into office promising to restore healthy relations abroad, and Morning Consult polling shows a wide increase in U.S. popularity during his first year in office. Though the United States has a much better image among its global allies than it did under Donald Trump, foreign policy experts say the broad unpopularity of China in those same countries is more indicative of what is holding American alliance structures together.

Those experts say fears of Chinese and Russian aggression, as exemplified in the current military standoff between Moscow and Kyiv and Beijing’s repeated incursions into Taiwanese airspace in 2021, outweigh any consideration that might stem from warm popular sentiment toward the United States. After all, America’s allies endured four years of diplomatic maltreatment during the Trump administration because they have seen what can happen to states without a defense agreement with Washington, like Georgia and Ukraine. Perhaps Machiavelli’s dictum that for a prince, fear is safer than love applies just as much today in Foggy Bottom as it did in feudal Florence. 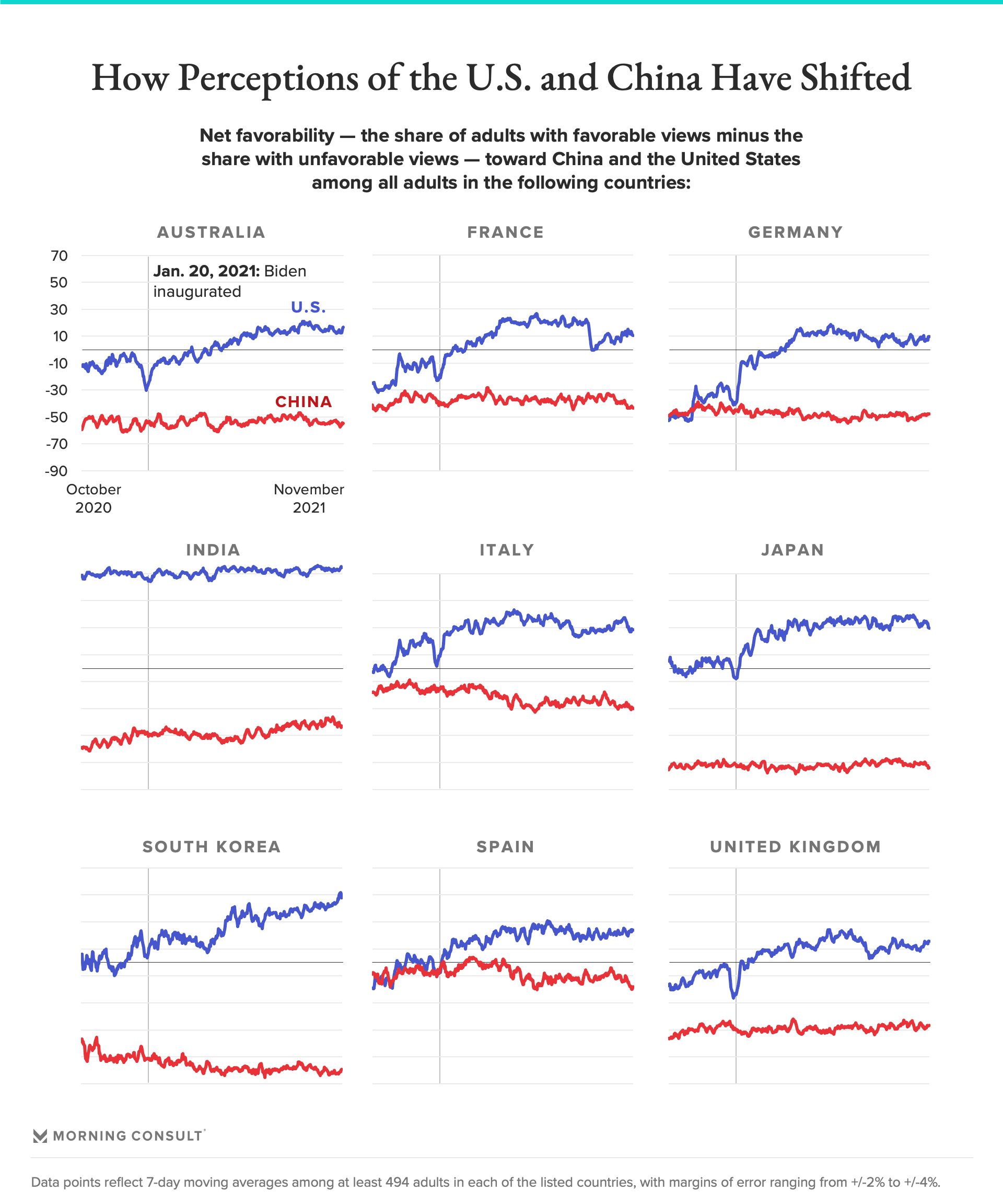 Adults in every European country polled by Morning Consult reported jumps in net favorability — the share of adults with a favorable view minus the share with an unfavorable view — of the United States in excess of 30 percentage points between surveys conducted roughly a month before the U.S. presidential election in 2020 and again in late November 2021, with Germany reporting a staggering gain of 62 points. In Japan and Australia, U.S. net favorability rose by over 24 points, and by 43 points in South Korea, which also reported a 21-point decline in net favorability of China. India, which only saw a small gain of 6 points, nonetheless had the highest overall net-favorable perception of the U.S. at 75 points.

“The Biden bump, if you will, is probably more about personality and rhetoric. The fact that he is not Donald Trump accounts for a large part of that swing,” said Dr. Osamah Khalil, the chair of international relations at Syracuse University’s Maxwell School of Citizenship & Public Affairs. “Where I think policy comes in has been about toning down the rhetoric, especially around the trade war — not just with China, but with the E.U. — and constantly criticizing NATO allies, particularly Germany.”

How the United States is perceived among the general public in a certain country doesn’t necessarily translate into how that country’s government will make choices regarding the future of the bilateral relationship, either.

“Ultimately, it doesn’t really matter what they think about the United States,” said Michael Auslin, a research fellow on contemporary Asia at Stanford University’s Hoover Institution. “It’s more about what governments feel is and isn’t in their best interest.”

Related: How the World Sees America Amid Its Chaotic Withdrawal from Afghanistan

China, meanwhile, remained broadly unpopular in every country polled by Morning Consult over the past 13 months. The Asian superpower had a net favorability rating far underwater among South Koreans (minus 79 percentage points), Japanese (minus 74 points) and Australians (minus 55 points) in November, each measuring among the lowest for all countries surveyed. And there’s plenty driving that negative sentiment. 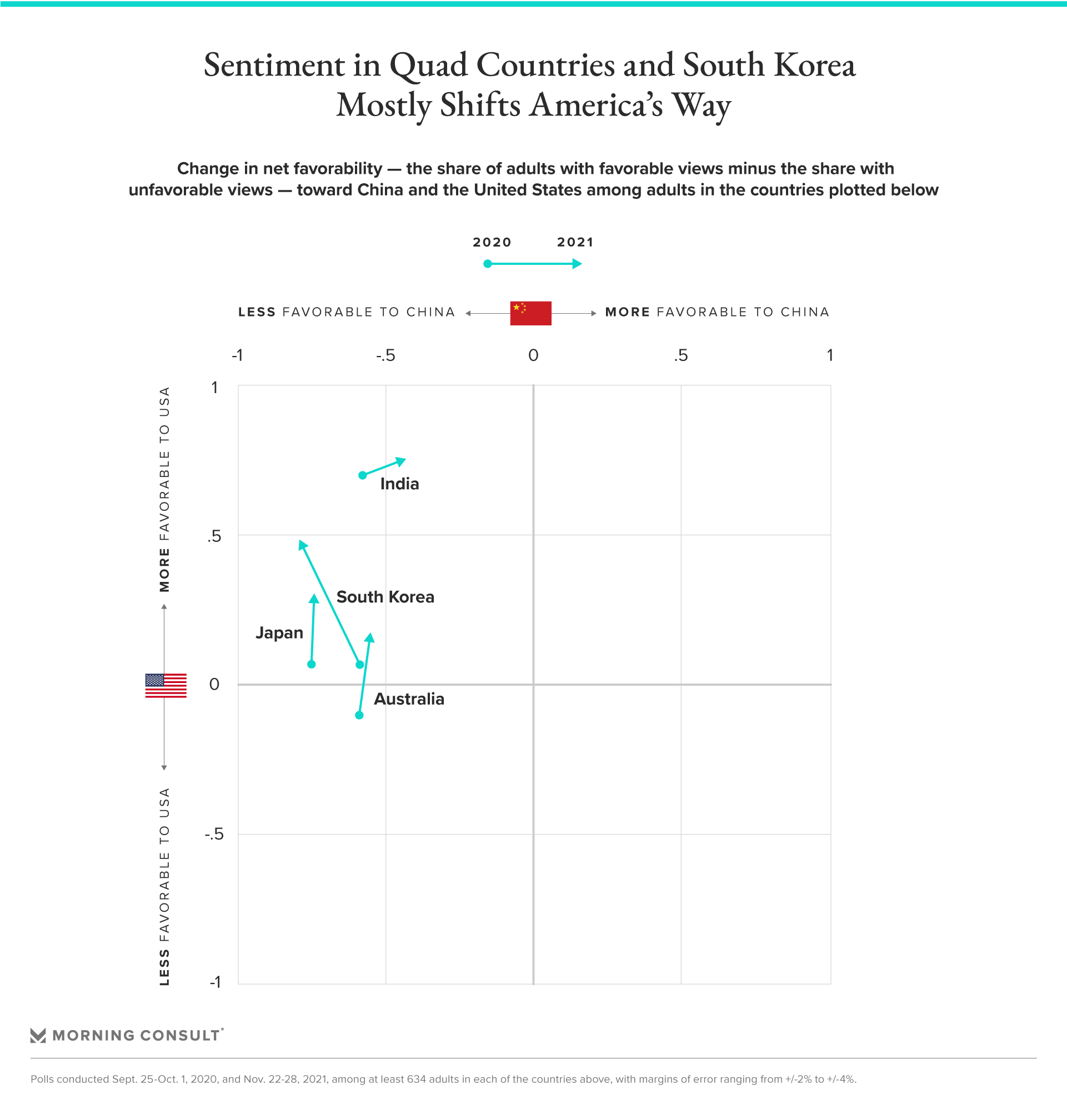 That concern has been reflected in the increasingly active multilateral security agreement among the United States, Japan, Australia and India known as the Quad, which “has been driven solely by perception of the threat of China,” according to Auslin. Between perennial Indo-Chinese border disputes, Chinese attempts to infiltrate the Australian Parliament and saber rattling with Japan over the Senkaku islands, which are administered by Tokyo but claimed by Beijing, there’s been plenty in recent years to cause heartburn for New Delhi, Tokyo and Canberra.

But Trump’s unilateral attempts to get tough on Beijing largely failed to produce results.

“Trump had been convinced by some key advisers that if you start a trade war with China, they will buckle; didn’t happen,” said Khalil, who added that ramped-up rhetoric has only caused China to respond in kind.

Meanwhile, the Biden administration, McMann said, “is seeing that a multilateral coalition willing to push back on China would potentially be more successful.” Still, challenges to marshalling the true power of a multilateral security arrangement among democracies in the Asia-Pacific region remain daunting — notably the long history of animosity between Seoul and Tokyo, and New Zealand’s strong opposition to participating in agreements involving nuclear or biological weapons.

But nothing is set in stone, and McMann said that while India has historically avoided making strong commitments to Washington, Chinese escalation along their disputed frontier, investment in archrival Pakistan as part of the Belt and Road Initiative and the pace of Chinese military development are all helping push New Delhi toward greater engagement.

Auslin argued that the multilateral approach “makes it easier for the Indians to participate because it’s not demanding a bilateral commitment” or making the country “choose sides.” In fact, Prime Minister Narendra Modi is making it clear that India still blazes its own trail in foreign affairs by signing a series of agreements this week meant to deepen New Delhi’s military ties with Russia, to the chagrin of U.S. officials. Nonetheless, experts interviewed for this story all agreed that America’s improved image in the region is a cause for concern in Beijing.

Despite America’s renewed commitment to multilateral diplomacy, allies see storm clouds looming over 2024. Another term in the White House for Trump or another populist, isolationist figure could scuttle the Biden administration’s efforts to build international coalitions. Still, it’s unlikely that America’s allies would decide to walk away even if Washington returned to a unilateral foreign policy, experts said.

“We do have formal alliances with Japan and Australia and South Korea and others. And so there is a limit to how far we can diverge — at least, short of crisis,” said Auslin. McMann agreed that the structural forces for sticking by the United States ultimately apply in Europe as well, arguing that despite any NATO allies’ differences on rhetoric and policy, “it’s just not feasible, necessarily, to have a complete divorce.” And Khalil said that overturning the diplomatic work of the better part of a century is a massive undertaking that Trump did not accomplish despite four years of his signature “America First” foreign policy.

But historian Anne Applebaum sees the situation with U.S. allies in less sanguine terms. In a showdown with NATO allies, she said, the United States always holds the high cards, as was repeatedly demonstrated during the Trump years.

“The Europeans will put up with anything because they have no choice. They have built no alternative” to deter Russian aggression, Applebaum said, adding that when it comes to the future of America’s global alliance system, the real question is: “Will America want it to last?”