How ‘Air Rage’ Is Impacting the Travel Industry 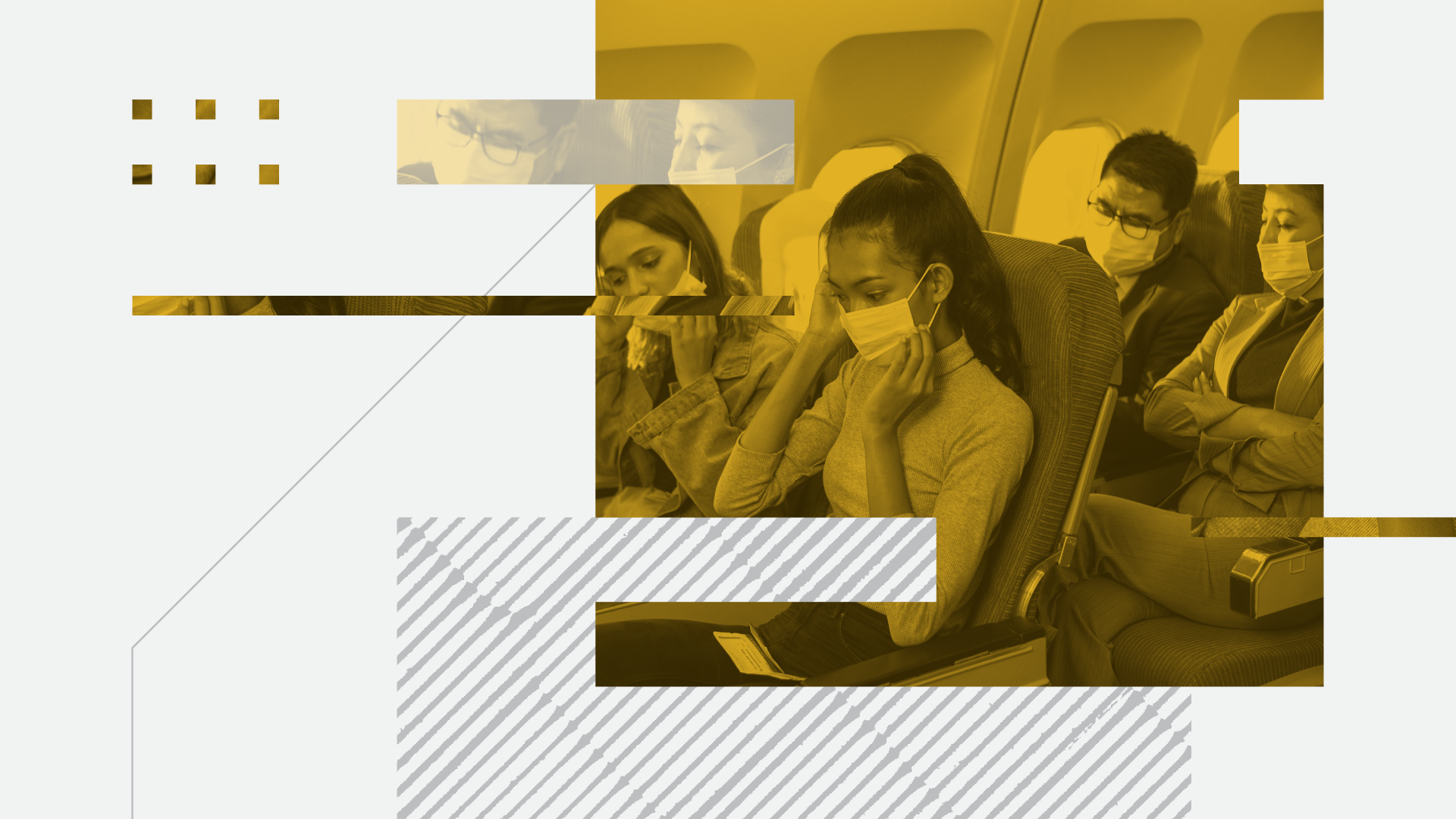 Deepening political and social divides are reverberating through the U.S. travel industry amid mask and vaccination mandates. Related incidents of “air rage” have gained media attention and prompted fears of other people’s behavior, leading many would-be travelers to rethink or cancel their plans. But such incidents aren’t negatively impacting sentiment toward airlines.

The COVID-19 pandemic has introduced more barriers to travel than just logistical concerns for tests, quarantines and border closures. While 43 percent of U.S. adults have said that fears for their own health have led them to travel less during the pandemic, nearly as many — 41 percent — have stayed home because of concerns about the way others around them might act.

Data and analysis from Morning Consult’s The State of Travel and Hospitality report show how concerns about conflict are impacting travelers during the busy holiday season.

Badly behaved passengers are deterring others from flying

Interpersonal conflict related to mask mandates and social distancing rules has driven headlines in the past year, but there’s something uniquely concerning to consumers about “air rage” — an incident where a passenger becomes unruly and causes a disruption during a flight. While a concerned person would normally be able to step away from a conflict at a grocery store or coffee shop, being confined to a small space in an airplane — which some people find uncomfortable even in the absence of conflict — means being near an aggressor may be unavoidable.

While air rage isn’t a new phenomenon, occurrences have spiked during the COVID-19 pandemic. So far in 2021, more than 5,300 air rage incidents have been reported, compared with several hundred in the years prior. Many such incidents were driven by conflict related to mask mandates. As a result, many Americans have decided to just stay home.

Share of U.S. adults who agree that the following factors have led them to travel less domestically during the pandemic:

Despite broad media coverage, only some airline news reached consumers

Air rage isn’t the only pressure point impacting airlines in 2021. News stories published throughout the year — about airlines requiring vaccinations and employees making political statements — have prompted polarized consumer responses. However, despite some amplified voices commenting on social media, most such stories did not gain traction among the broader public.

Respondents were asked how much they have seen, read or heard about the following:

More importantly, the stories also do not appear to have deeply impacted consumer sentiment. The net favorability of six major U.S. airlines was largely unchanged throughout the incidents that defined summer and fall travel this year. While there were brief dips in favorability for some carriers, most seemed to be related to flight cancellations, and all airlines had recovered to midsummer levels by December. 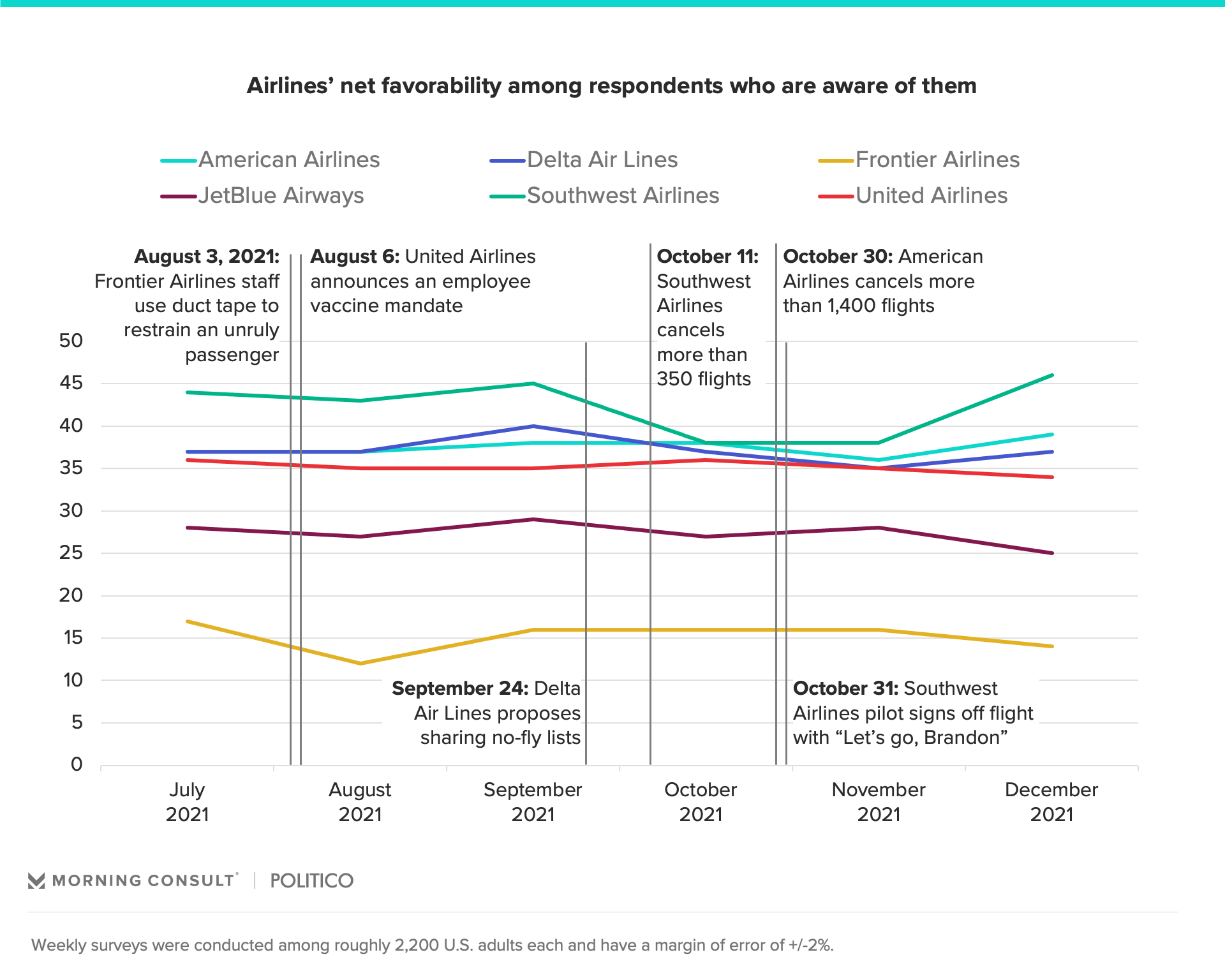 What moves the needle? Employee behavior and canceled flights

Concern over other people’s irresponsible actions has prompted many would-be flyers to stay home or seek other forms of transportation, but they largely stop short of blaming airlines for such incidents. Fifty-nine percent of adults blame the passengers responsible for air rage incidents, while 22 percent blame airlines or their employees, 11 percent blame the Transportation Security Administration or other airport authorities and 5 percent blame current travel-related anxiety.

Instead, travelers are more influenced by negative interactions with employees and mass flight cancellations — both issues that airlines can address, if not completely control.

Share of respondents who say they would feel more negatively about an airline if they learned the following:

These findings should prompt a sigh of relief from most airlines, but they also reinforce the idea that travelers view every staff member as a reflection of the company. With political polarization likely to endure through the pandemic and its new variants, expect tensions to remain sky-high. Airlines must have clear protocols for guiding the expression of employees’ personal beliefs while on the job, as well as mechanisms in place to manage any incidents before they gain national attention.