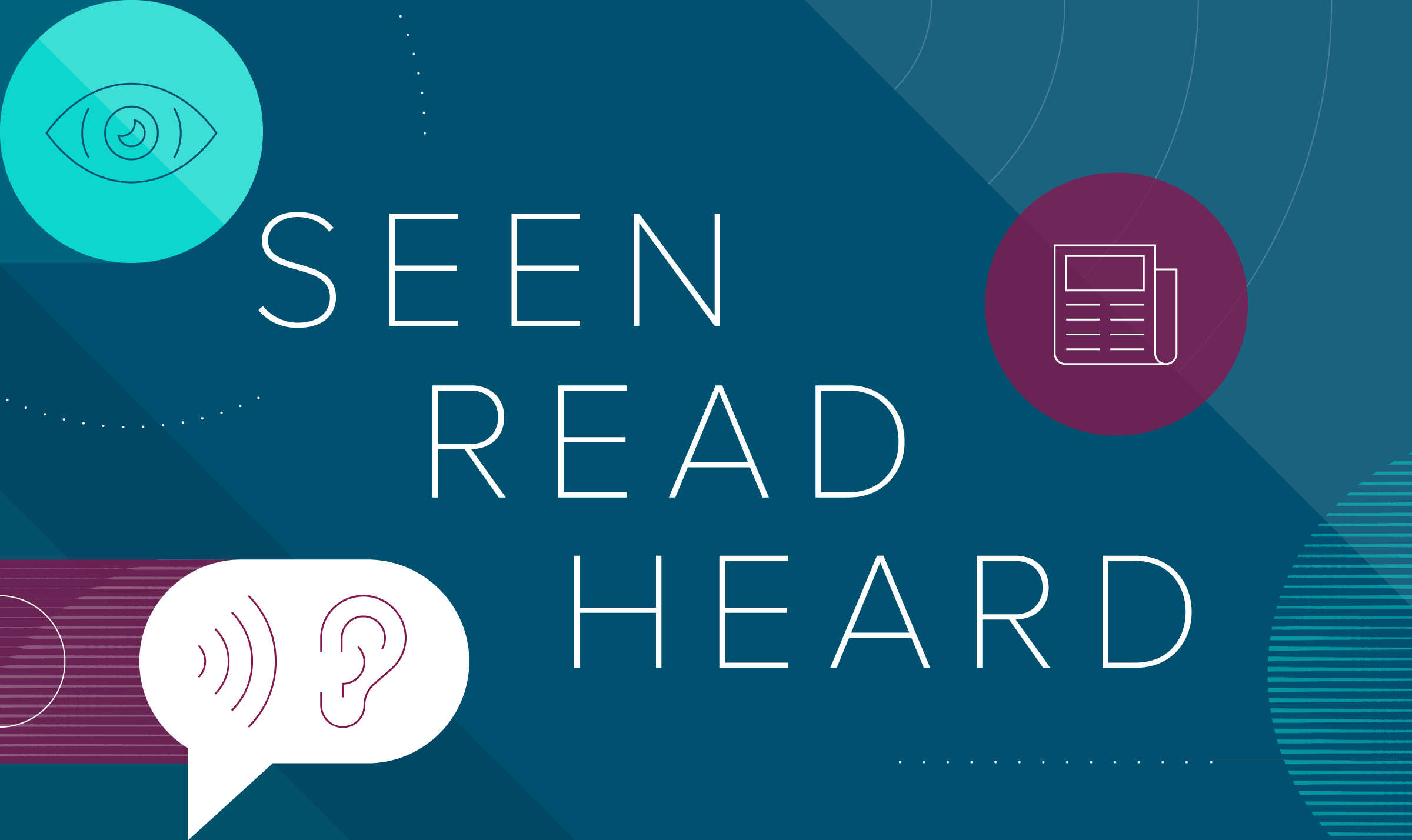 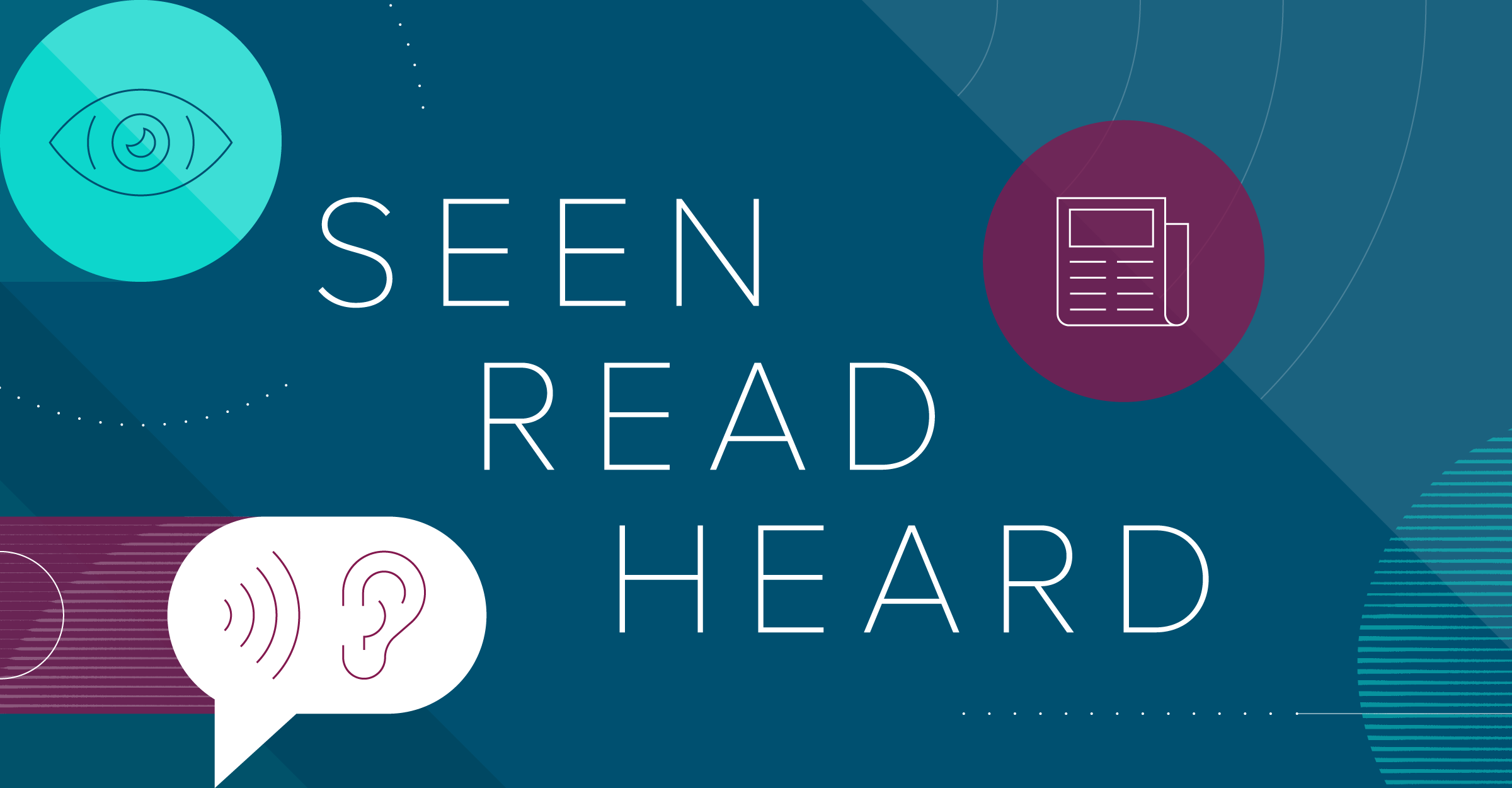 Analyzing the News That Broke Through in 2021

Partisan, age and racial divisions are apparent in what resonates with voters

Many Americans were ready to move on from the death and division of 2020 as they heralded the dawn of 2021, with COVID-19 vaccines making their way into arms and a new president set to move into the White House. But last year’s events were not done with America, as voters continued to deal with the fallout from the presidential election — beginning with the Jan. 6 Capitol attack — a resilient and deadly virus, and the tragic events that sparked nationwide and global protests for racial justice.

The extent to which these stories were consumed by voters was often determined by the same fissures of partisanship, age and race that permeate American society and its politics, according to findings from 52 Morning Consult surveys conducted throughout 2021, which asked Americans how much they had seen, read or heard about a range of news events unfolding at the time. (See the full interactive here.)

Polls conducted throughout the year surveyed more than 100,000 registered voters about more than 350 news events, ranging from the aftermath of the Capitol riot to the omicron variant’s stateside arrival. This report seeks to analyze the news that truly resonated across the country by focusing on the share of voters who contemporaneously reported hearing “a lot” about a curated list of 131 news items to measure salience among the electorate.

The news that broke through the most

Voters were most likely to have heard about President Joe Biden’s signing of his signature legislation to date: the $1.9 trillion American Rescue Plan, his coronavirus relief bill, which authorized $1,400 stimulus payments for many Americans, among its many provisions.

Almost immediately after its enactment in March, 64 percent of voters — including 73 percent of Democrats and nearly 3 in 5 Republicans and independents — said they’d heard a lot about the bill signing, which helped to buoy Biden’s standing with the public at the end of his first 100 days in office. 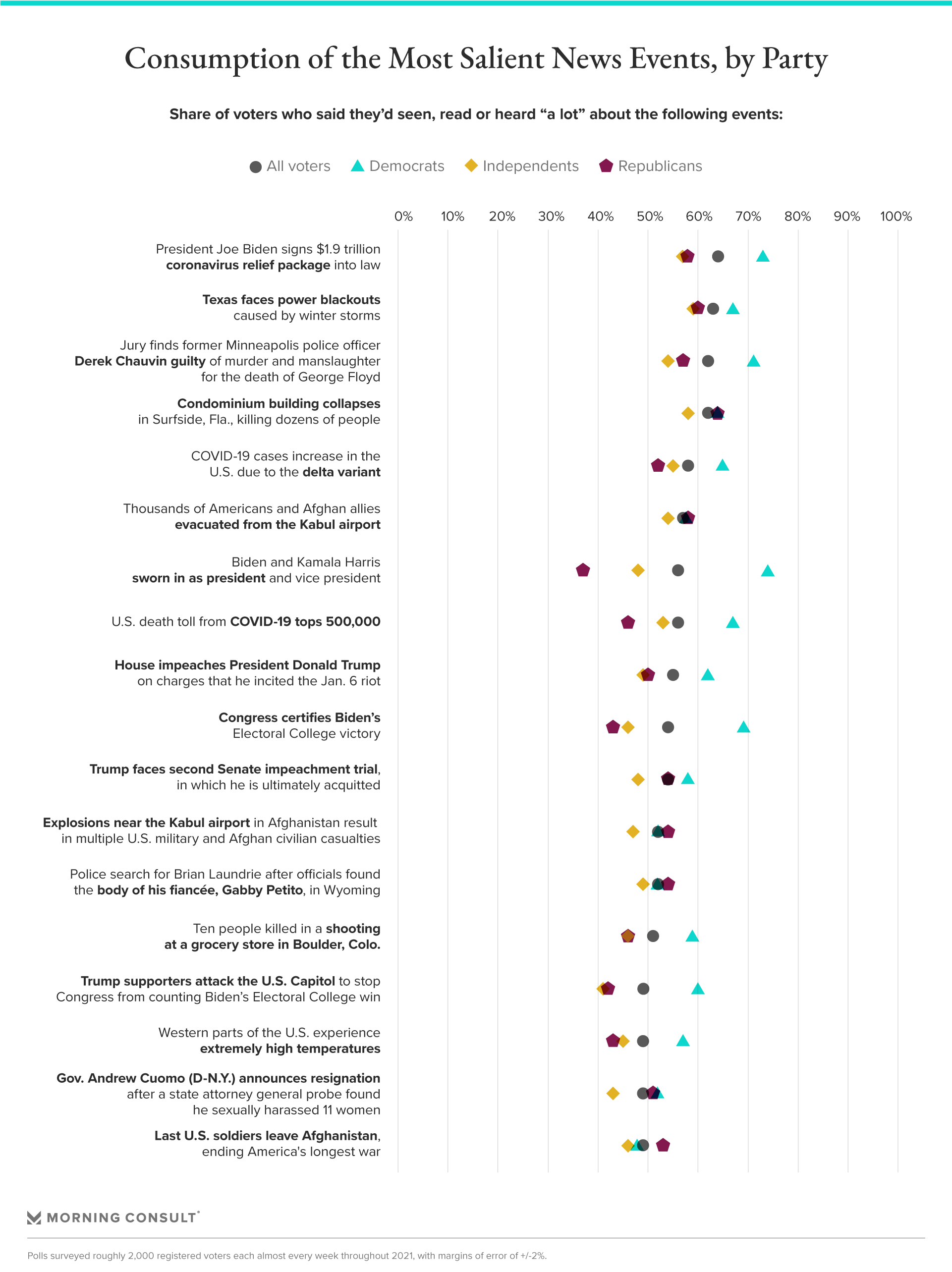 Also highly resonant were the deadly Texas winter blackouts, the conviction of former Minneapolis police officer Derek Chauvin for the murder of George Floyd in 2020 and the disastrous condominium collapse in Surfside, Fla.

The evacuation of thousands of Americans and Afghan allies from the Kabul airport was also a highly salient event, breaking through to 57 percent of voters (with no partisan gap) at the height of the foreign chaos that helped push perceptions of Biden’s job performance underwater in August.

When it came to mainstream political news stories, Republicans were generally less likely than Democrats to report high news consumption, especially when those stories had negative implications for the party or its leader. For example, Republicans were half as likely to say they heard a lot about a recording that revealed then-President Donald Trump had pressured Brad Raffensperger, Georgia’s secretary of state, to overturn Biden’s victory.

By more than 20 percentage points, Democrats were more likely than GOP voters to have heard a lot about Georgia Republicans enacting a restrictive election law in response to Trump’s unfounded voter fraud claims, as well as Congress’ certification of Biden’s Electoral College victory in the wake of the Jan. 6 Capitol attack.

Share of voters who said they’d seen, read or heard “a lot” about the following:

Polls surveyed roughly 2,000 registered voters almost every week throughout 2021, with margins of error of +/-2%.

News of the Capitol attack itself penetrated the minds of roughly half of voters, according to a survey that went out on the night of the insurrection, producing a similarly striking 18-point partisan gap in resonance between Democrats and Republicans, 60 percent to 42 percent.

There were exceptions to the trend: One of the few stories that produced an asymmetrical partisan resonance was rising gas prices. When Morning Consult tested it in March, GOP voters were 20 points more likely than Democrats to say they’d heard “a lot” about that inflation warning sign.

While conservative news sources were quick to highlight the pain at the pump, the propensity of Democratic voters to hear more about the bulk of the mainstream news events tested by Morning Consult could also be explained by where — and how often — these Americans typically get their news.

According to a Morning Consult survey conducted in May, 41 percent of Democratic voters said they watch a network news broadcast daily, compared with 22 percent of Republicans. Democrats were also more likely to report reading a newspaper (22 percent to 12 percent) or watching cable news (32 percent to 22 percent) each day.

Republicans were most likely to report checking the news regularly on social media, though they were still less likely to do so than Democrats (27 percent to 39 percent). Those disparities bore out in this year’s findings. Only 47 percent of the youngest voters, for example, heard a lot about the enactment of the American Rescue Plan, compared with 82 percent of the oldest voters. And despite the younger cohort’s generally elevated concern about climate, the oldest voters were far more likely to have heard a lot about the summer’s Western heat wave (67 percent to 36 percent) and Hurricane Ida’s landfall (64 percent to 37 percent) — two stories that earned major television news attention.

Among the few relatively high-profile stories that resonated more with the youngest voters were those involving younger celebrities, including the deadly crowd surge at rapper Travis Scott’s Astroworld Festival (45 percent to 39 percent) and rapper Nicki Minaj’s eyebrow-raising tweet about COVID-19 vaccine concerns (26 percent to 20 percent).

How news resonates by race

There were only small gaps in the shares of Black and white voters who report getting their news from mainstream sources such as newspapers, radio, or cable and network news. In turn, there were few racial disparities among the most salient news events of the year, from the stimulus bill to the delta variant’s emergence. 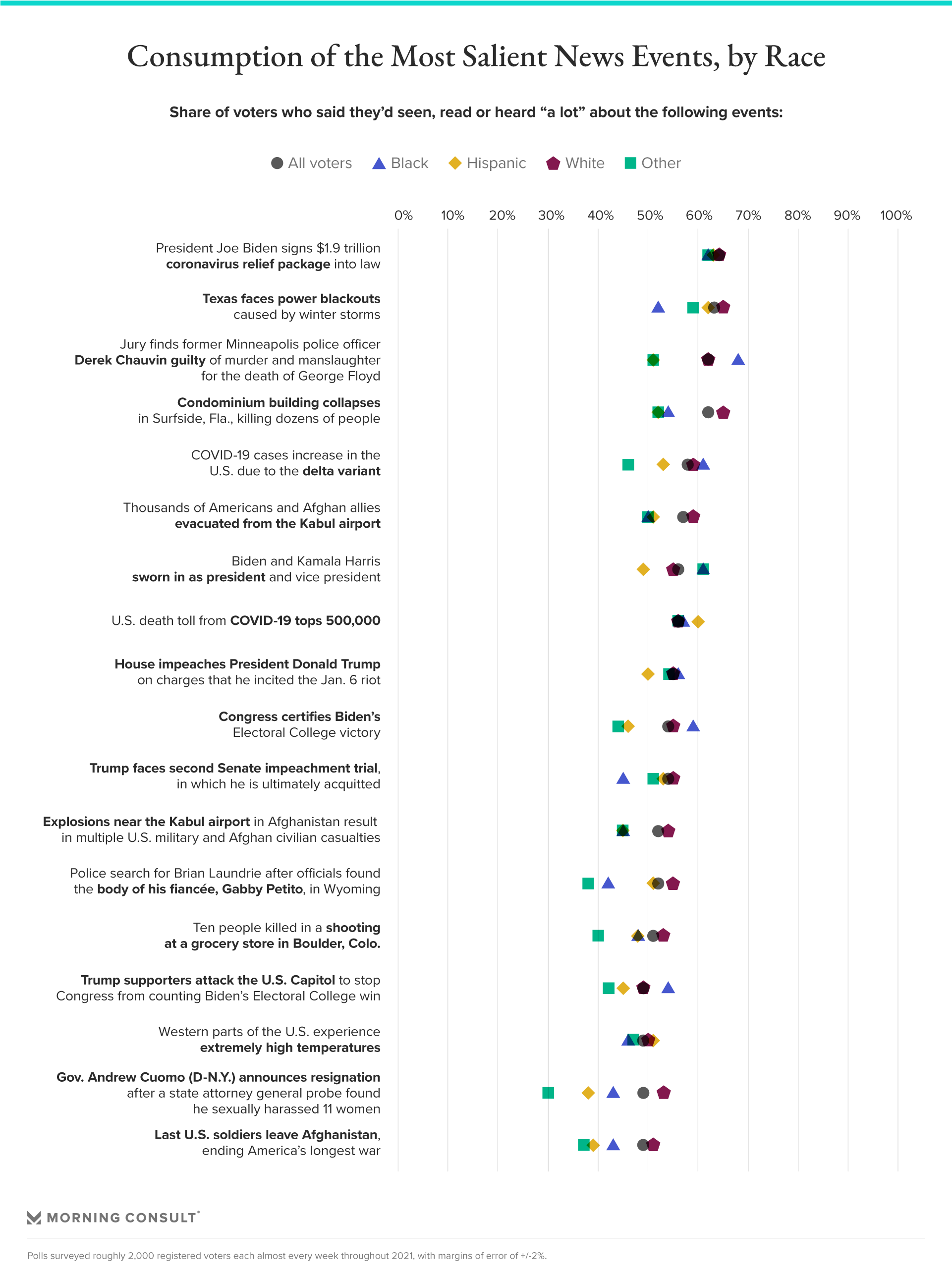 But divisions in news consumption did emerge on stories with varying implications for the two groups. Black voters were more likely than white voters (52 percent to 28 percent) to report having heard a lot about the guilty verdicts against Travis McMichael, Gregory McMichael and William Bryan for the killing of Ahmaud Arbery. At 68 percent, Black voters were most likely to have heard about the Chauvin verdict, though 62 percent of white voters also said the same.

What didn’t break through

A number of stories with significant implications in Washington and on the global front were little more than a blip on voters’ radar screens.

When asked about Trump’s April call for the ouster of Senate Minority Leader Mitch McConnell (R-Ky.) — something that could weigh on the handful of contested Republican primaries in the 2022 midterms — 45 percent of voters said they’d heard “nothing at all” about it.

Share of voters who said they’d seen, read or heard “nothing at all” about the following:

Polls surveyed roughly 2,000 registered voters almost every week throughout 2021, with margins of error of +/-2%.

A large share of voters (36 percent) — including 45 percent of Republicans — said they’d heard nothing about the conclusion of the Republican-led election audit in Maricopa County, Ariz., which reaffirmed Biden’s 2020 victory over Trump and provided yet more proof that the Democrat won fair and square.

Deals with significant geopolitical implications, such as the U.S.-Germany agreement to allow completion of the Nord Stream 2 pipeline with Russia or the so-called AUKUS nuclear submarine pact between the United States, United Kingdom and Australia that angered France, were also among 2021’s least resonant news items.

But serious stories weren’t the only ones that didn’t break through to voters. Remember when Washington briefly obsessed over how Biden’s dog, Major, bit someone at the White House? That was also among the least resonant stories with voters, with 29 percent saying they heard nothing about it.