Global Supply Chain Disruptions Are Widespread, but Starting to Clear

Most of the world’s largest economies continue to be impacted by supply chain disruptions and rising inflation. 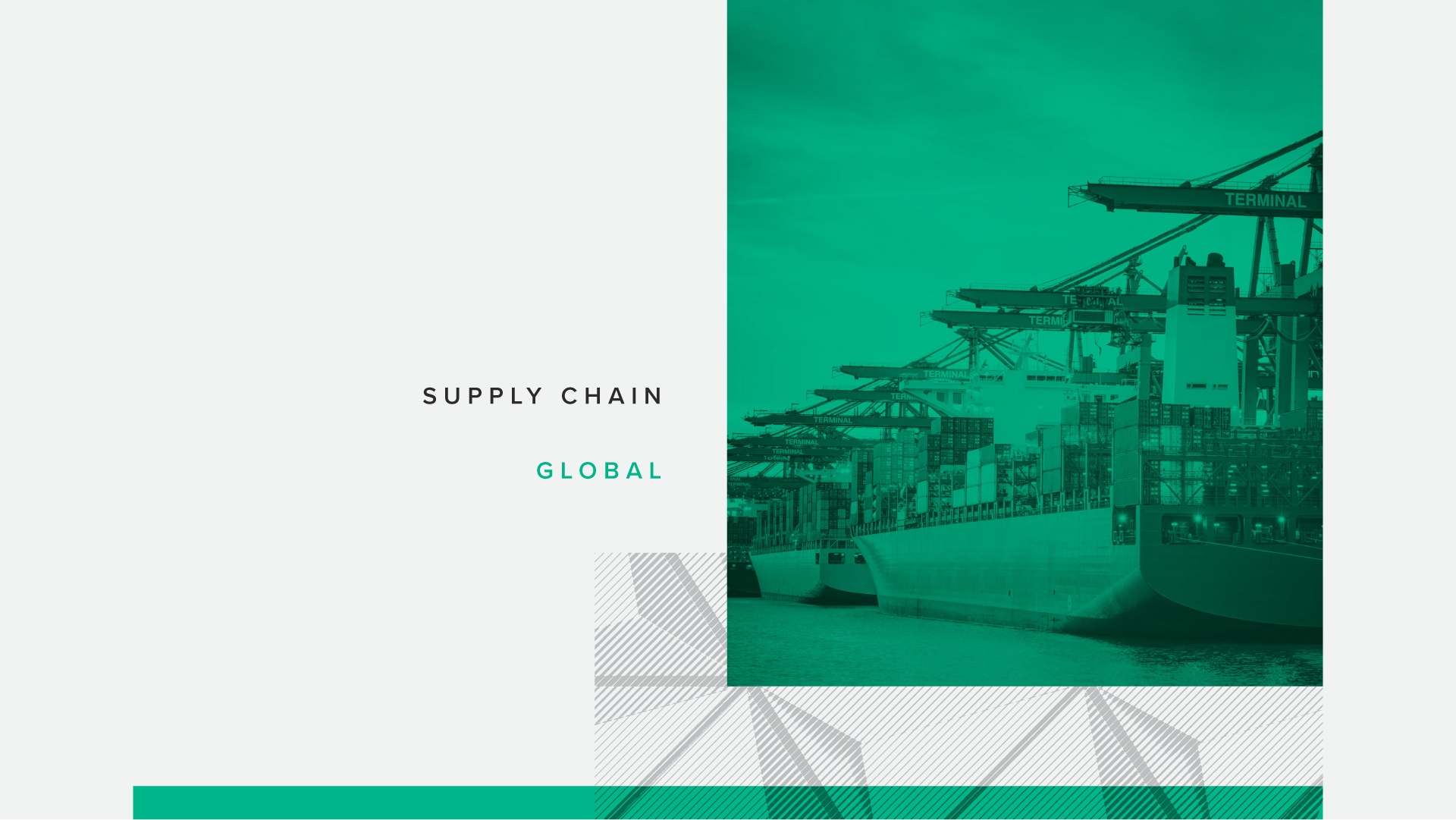 Supply chain disruptions have rippled across the global economy in recent months, triggering widespread impacts in both rich countries and emerging markets. Shortages and logistical bottlenecks have stoked inflation concerns as supply-constrained goods prices rose in response to pent-up demand following a recovery in household spending.

To evaluate the impact of supply chain disruptions around the world, Morning Consult began surveying consumers in the 15 largest economies at the end of September. Each month, consumers are asked which products they had difficulty procuring and who they blame for the shortages.

November’s results showed that supply chain disruptions continue to be widespread, and there is some evidence that these disruptions are driving up inflation rates. However, half of all product categories registered some improvement compared with the previous month, suggesting that the worst phase of disruption may have already passed.

Global bottlenecks are starting to loosen 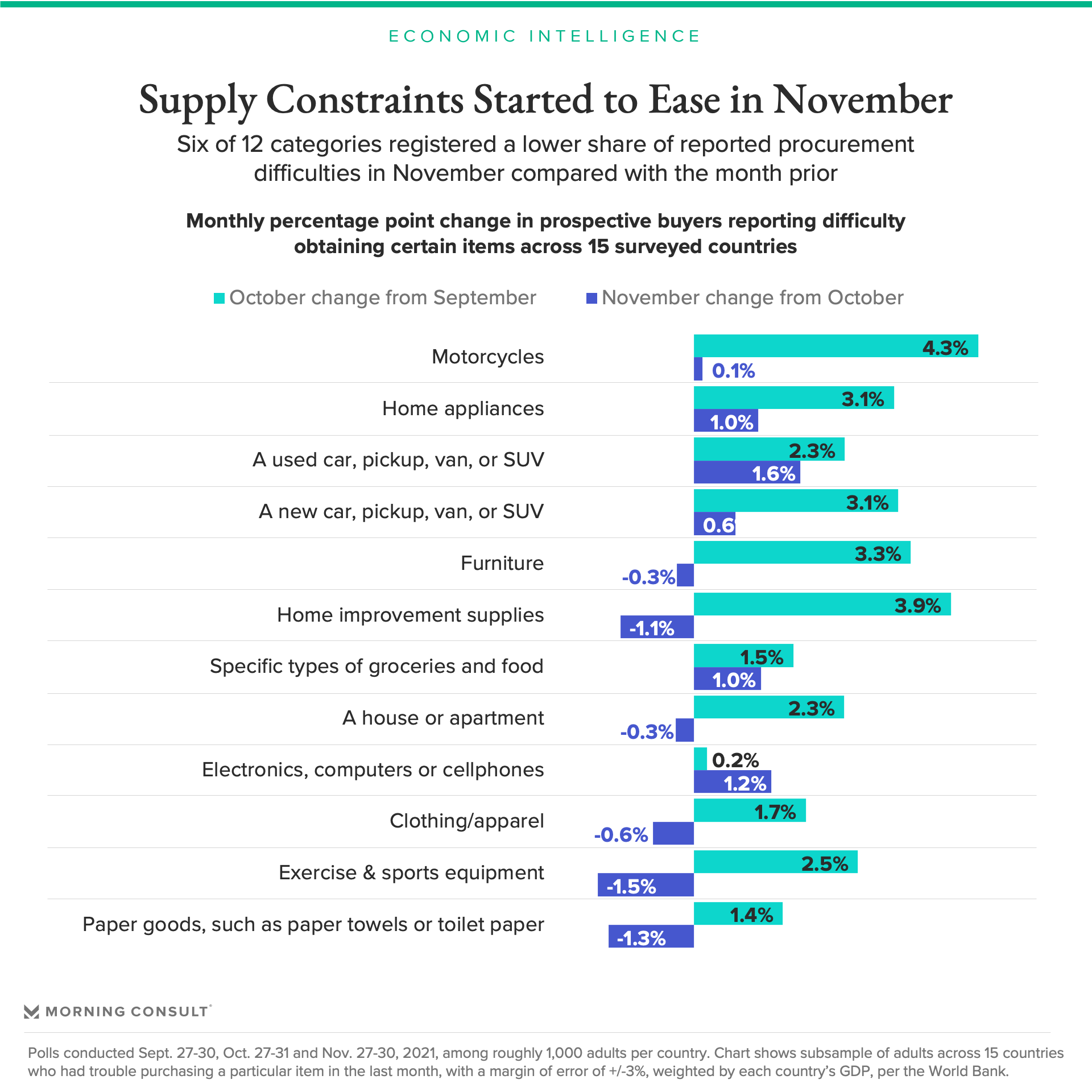 Entering the final month of the year, supply chain dynamics appear to be trending in a positive direction. Several categories impacted by shortages showed modest improvement last month; the share of prospective buyers reporting buying difficulties across all 15 countries fell in 6 of 12 categories between October and November. Improving the flow of goods is a critical component of growth, especially for countries like the United States, where consumer spending not only drives GDP domestically, but has implications for trading partners as well.

Shortages and supply chain bottlenecks are impacting developed economies and emerging markets alike, but the effects are being felt in different ways. Richer countries are contending with limited housing stock, while emerging economies have been most acutely impacted by restricted availability of vehicles. 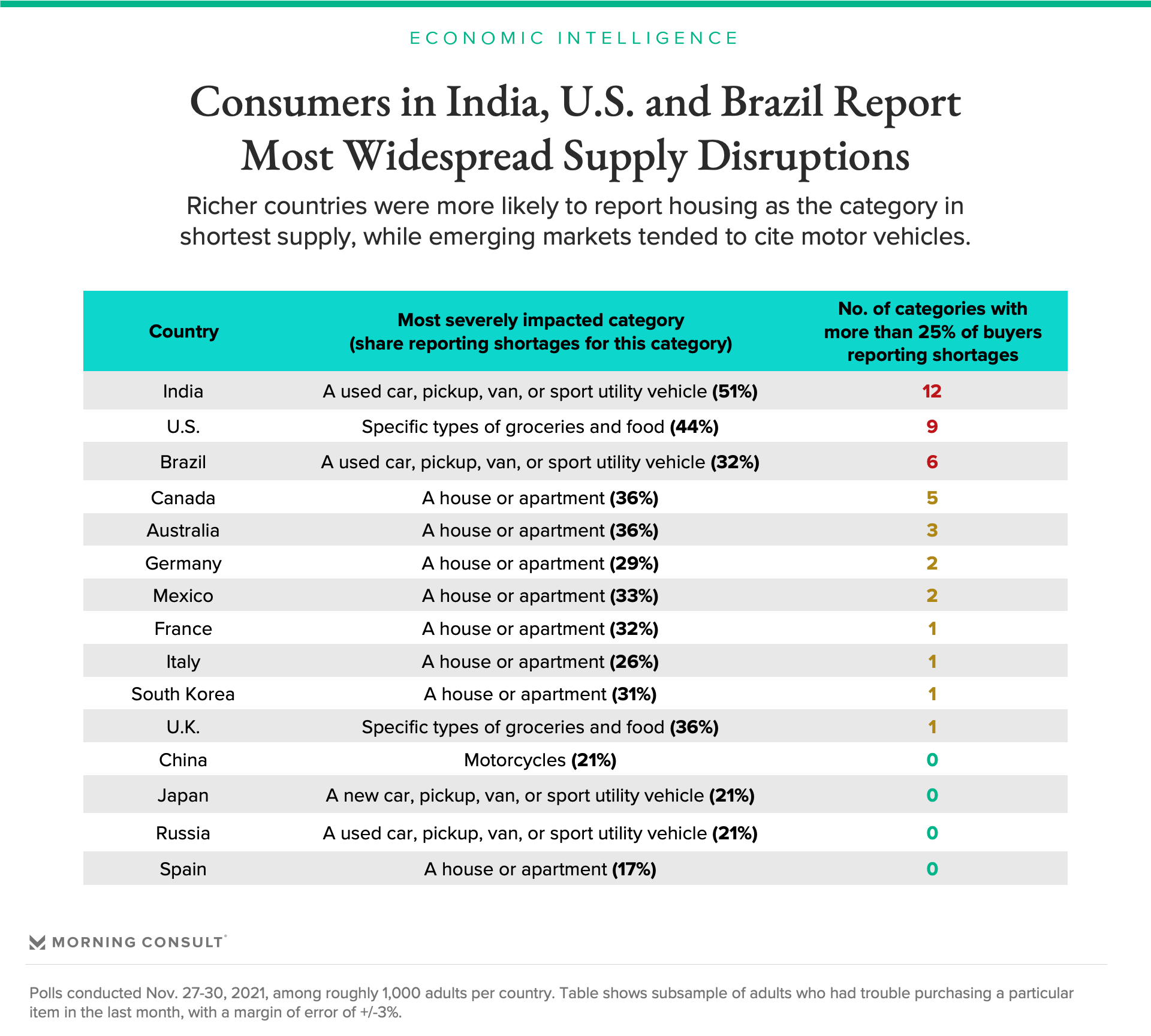 In 11 of the 15 countries surveyed, at least one product category had more than a quarter of prospective buyers reporting procurement difficulties in November. India, the United States and Brazil had the most pervasive supply disruptions, with substantial shortages reported for six or more categories each. The presence of the United States among the most impacted countries underlines the severity of current supply chain disruptions: Even in normal times, developing countries like India and Brazil might experience some degree of chronic shortages, but the United States’ inclusion in this group — despite its comparatively robust logistical infrastructure — is unusual.

The type of products most impacted by supply constraints in each country varied. In countries with relatively higher GDP per capita — Canada, Australia, France and Germany — housing tended to be the category that proved most elusive. In developing nations like Brazil, Russia, India and China, vehicles — including cars and motorcycles — were the most impacted categories.

Supply constraints have been met with robust demand as the global economy progresses in its pandemic recovery, and shortages of goods have corresponded with rising prices. 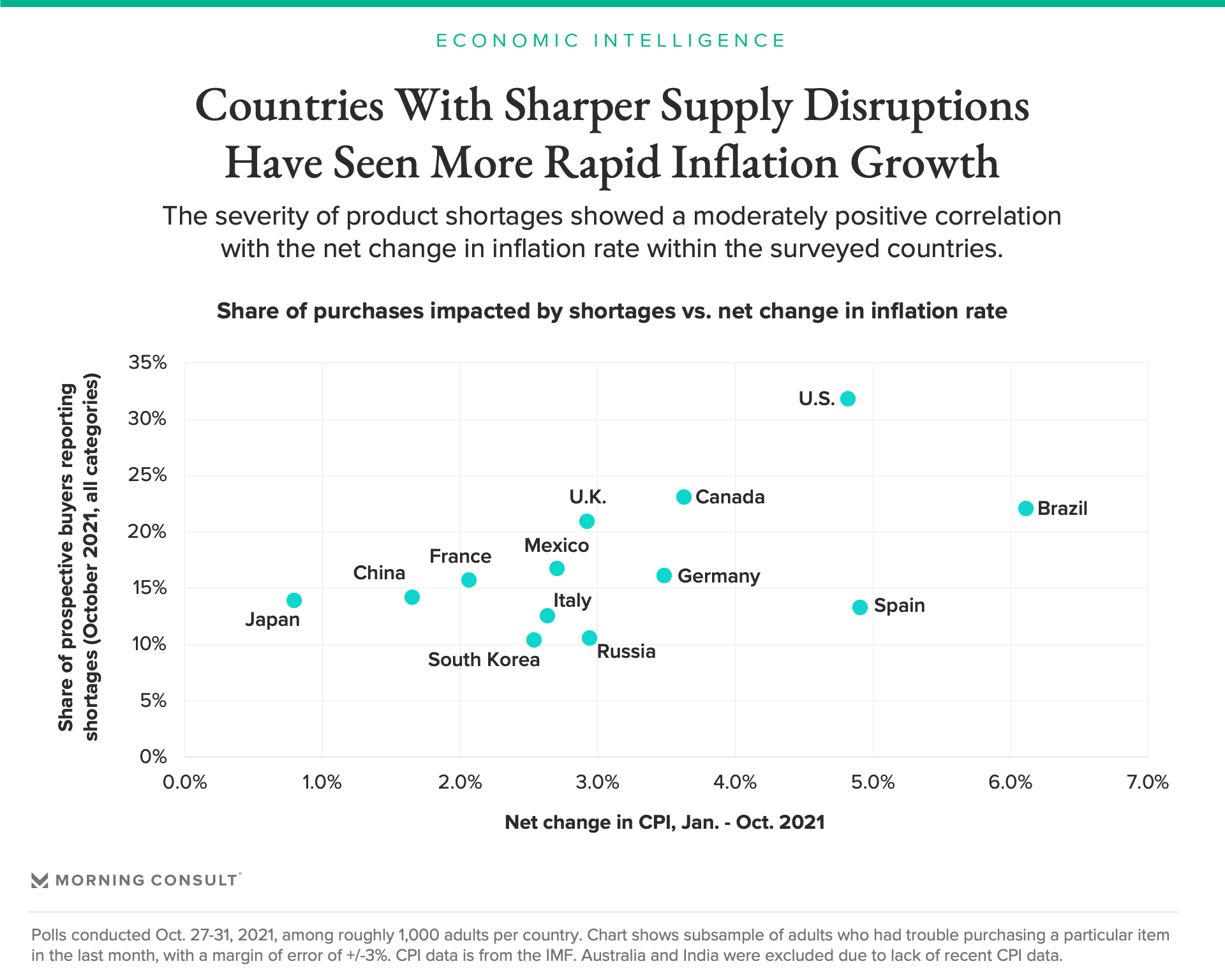 Among the countries surveyed, more acute supply chain disruptions tended to be associated with rising inflation this year. The share of respondents reporting shortages across all categories within a given country had a moderately positive correlation (0.53) with the net change in that country’s inflation rate from January through October. This data suggests that global inflation pressures will ease as supply chain disruptions abate, making it a key indicator to watch going forward.

Countries agree on blaming manufacturers and hoarders, but disagree on leadership’s role in shortages

Manufacturers, hoarders and logistics companies tended to receive the most blame for shortages, while stores, local government and the weather were generally viewed as least culpable. 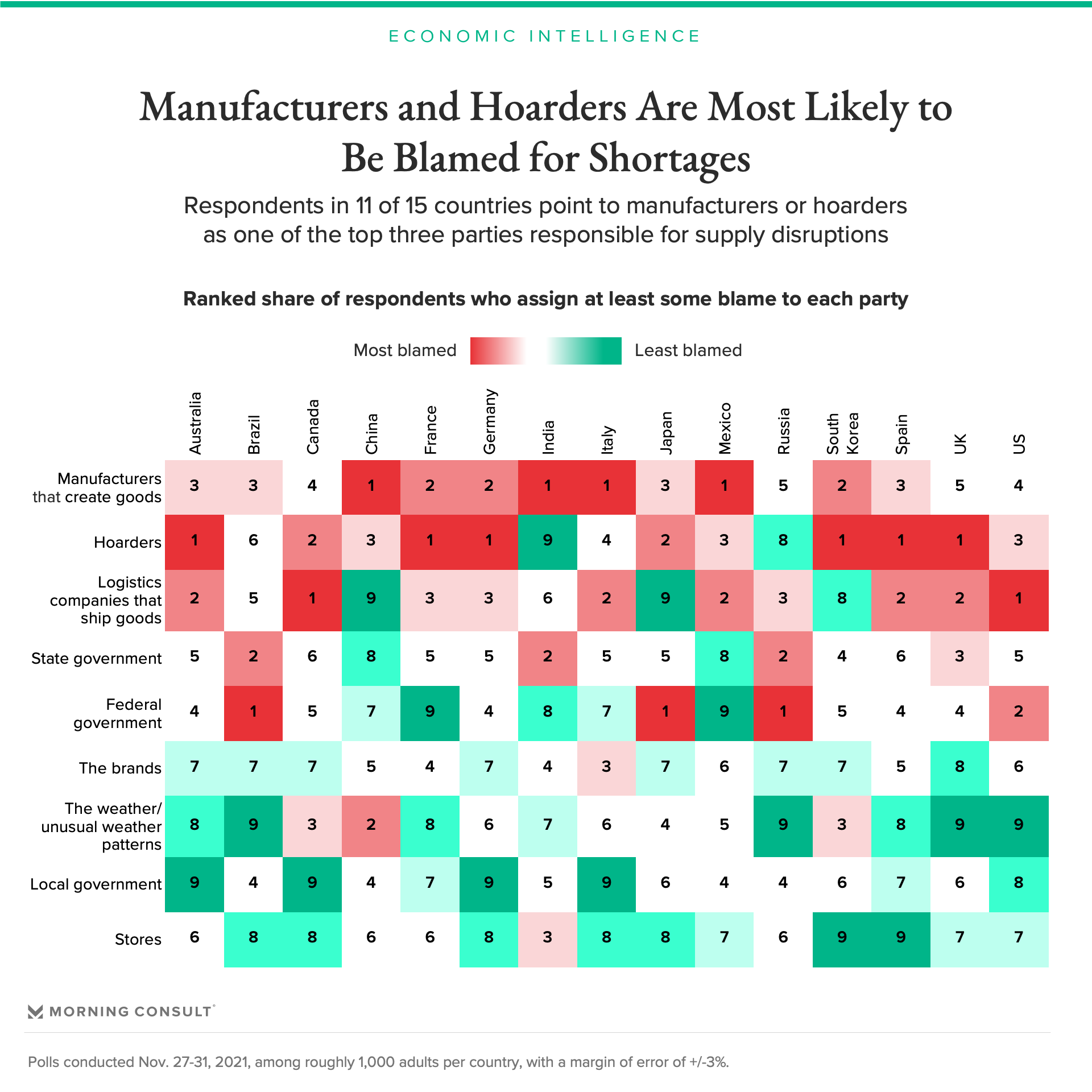 The degree of blame directed at the federal government was somewhat correlated with approval ratings: National leaders in Brazil, the United States and Japan all have approval ratings of less than 50 percent, while the leaders of India and Mexico currently have the highest approval ratings among the countries tracked by Morning Consult (72 percent and 66 percent, respectively).

While supply chain issues appear to be trending in a positive direction, the omicron variant is a looming risk that may slow progress if its impact mimics that of delta. However, climbing vaccination rates worldwide and adaptations implemented during prior surges may help blunt the effect of the new variant on the global supply chain.