Biden Says America Is Back. 2022 Will Put That Premise to the Test

This year has seen major improvements in U.S. relations with allies and partners, but experts see events on the horizon that could be decisive in determining the direction of those crucial ties 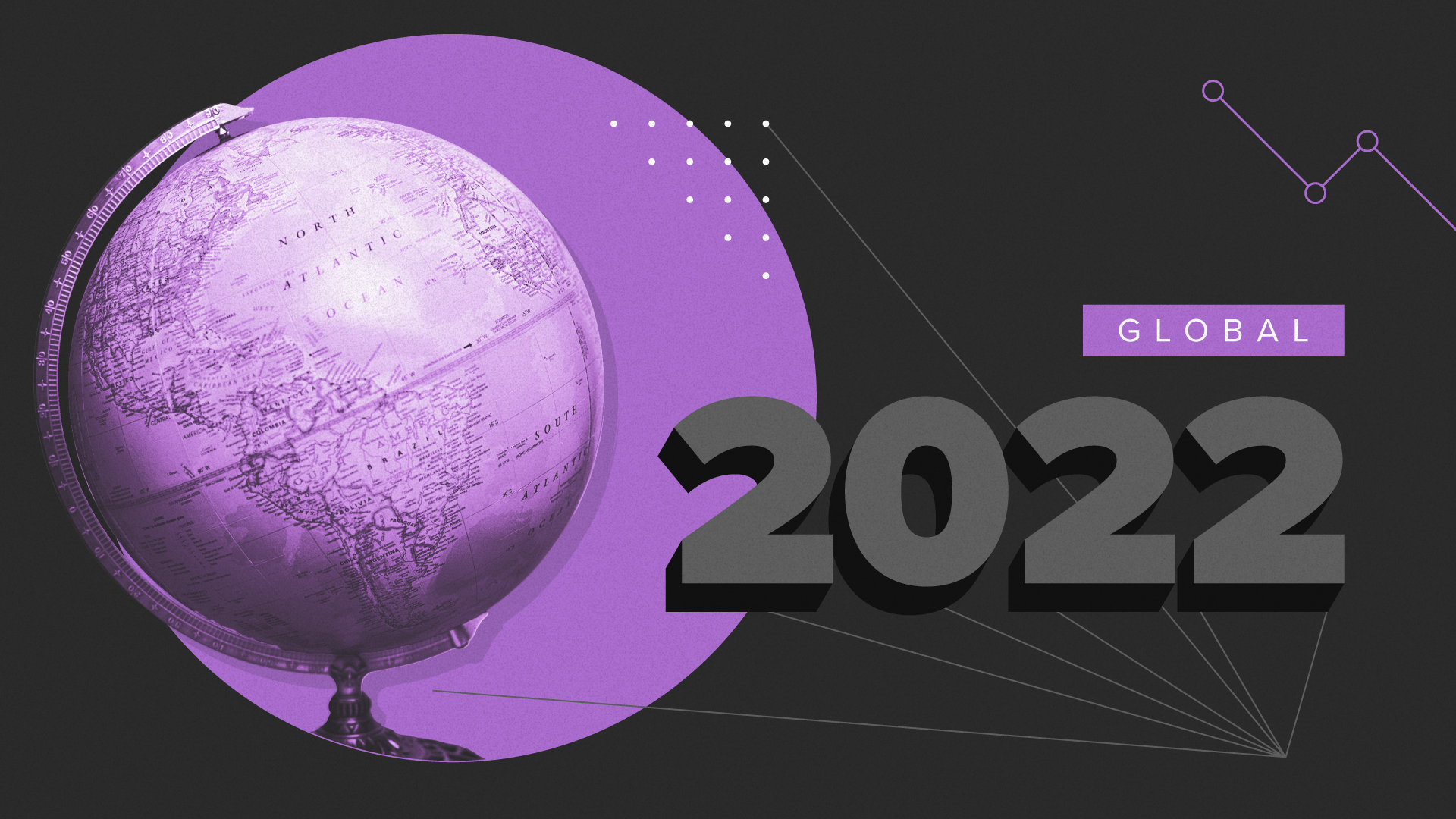 Upcoming challenges on the international stage over Ukraine, the Iran nuclear deal and assertive Chinese foreign policy could set back President Joe Biden’s efforts to restore America’s position in the world order as allies with disparate interests push for competing outcomes, while also hedging against the possibility of more political gridlock in Washington and a possible return to the “America First” foreign policy originally embraced by former President Donald Trump.

But in Asia, the predicted economic woes for China in 2022 present an opportunity to tilt the long-term balance of power more toward the United States by deepening economic ties to countries caught between commercial reliance on China and concerns about Beijing’s ambitions.

“The big question has been whether or not the Trump years were an interregnum or a dangerous foreshadowing of things to come,” said Stewart M. Patrick, director of the International Institutions and Global Governance program at the Council on Foreign Relations. “And because of the complete breakdown of any bipartisanship in the U.S., allies and partners are hedging their bets.”

Europe: Trying to win without fighting

The past several weeks of high-stakes diplomacy over the Russian military buildup on its border with Ukraine have been perhaps the premier example of how Washington would like to conduct diplomacy with American allies. Biden orchestrated a complex web of summits with the major NATO powers, the coalition’s easternmost members known as the Bucharest Nine and his Ukrainian and Russian counterparts to impose a credible threat of sanctions that seem to have taken the temperature down for the moment. However, the American president also signaled there was a limit to the degree of military commitment Washington was prepared to shoulder to deter Moscow, and that he would be open to accommodation.

Paul B. Stares, director of CFR’s Center for Preventive Action, said “that sent alarm bells ringing that the U.S. really wasn’t fully committed to the security of states on NATO’s front line, or might compromise certain things in order to avoid war.”

In addition to the Ukraine crisis, experts pointed to two more key areas to watch that will have a “profound bearing” on European allies’ confidence in American security commitments: China’s increasingly assertive foreign policy and talks to resume the Iran nuclear accord. With regard to China, where European powers see fewer direct threats and more economic opportunities, Washington faces more challenges in lining up a united front.

“Certain European countries share the administration’s more hawkish view, but others are really leery of getting involved in a confrontation with China,” said Patrick.

The recent kerfuffle over the canceled sale of French submarines to Australia was a missed opportunity to move European and American interests in Asia into greater alignment, according to experts interviewed for this article. Multiple sources also noted that worries about ongoing political gridlock in Washington make European politicians wary of putting all their eggs in America’s basket. After all, they might need to trade with China if another U.S. president should echo Trump’s protectionist policies in the future.

Political gridlock also hampers progress on the issue that is perhaps the greatest cause for concern: the seemingly moribund talks to resume the 2015 nuclear accord with Iran.

“It’s very difficult for the U.S. to make credible commitments that Iran will believe, because the Republicans have said, flatly, they’re going to blow up everything that they can to block any restoration of the nuclear agreement,” said Justin Logan, a senior fellow at the Cato Institute.

And because sanctions on Tehran are already among the tightest in the world, it’s not clear what credible options Washington might have to prevent Iran from gaining nuclear weapons short of military action in the eventuality that diplomacy fails, which experts agreed would not be supported by the European powers. Stares said he worries that a nuclear Iran could spur neighboring states to develop their own nuclear deterrents, as it would be the fourth country to openly violate the principles of nonproliferation.

Latin America: Will Biden put money where his mouth is?

Former Mexican Foreign Secretary Jorge Castañeda said the Biden administration, like that of his predecessor, has focused on migration at the expense of several pressing issues in Latin America, and he doesn’t think much of its premier program aiming to mitigate migration in the region by raising private investment in Guatemala, Honduras and El Salvador.

“If the private sector wanted to invest there, they would have already done it,” Castañeda said. “They wouldn’t be waiting for Vice President Harris to call and ask them for pledges.”

The United States is scheduled to host the Summit of the Americas this summer, and Castañeda thinks this would be the perfect forum to put forth plans to address a series of issues alongside partners in Latin America, including climate change, human rights, institutional corruption, diplomatic normalization with Cuba and pathways to address Venezuela’s multiple crises.

Even if the administration remains focused almost exclusively on migration, Castañeda said stale policy refrains need to be reassessed: “Can you imagine somebody saying they were in favor of disorderly, irregular and unsafe migration? Obviously not. It’s silly, frankly, and there’s a lot of things that Biden could do, but he’s so scared of the electoral consequences that he won’t.”

India: A promising start to a long journey

In India, Biden found relations in a much better place than where he left them as vice president, as New Delhi’s fears of an increasingly aggressive China led it to make major strides in deepening ties to the other members of the so-called Quad — Japan, Australia and the United States — after the defunct group, originally proposed in 2007, was revived a decade later. However, former Australian Prime Minister Kevin Rudd, who currently serves as president and CEO of Asia Society, a global nonprofit, said the White House should keep in mind that it is very far from achieving the level of cooperation and capability it would like with New Delhi.

Observers looking to gauge the depth of the U.S.-India strategic relationship as the next year unfolds should keep an eye on efforts from the White House to enhance bilateral trust and Indian military might, as well as New Delhi’s receptiveness toward such overtures. However, such receptiveness could only provide a limited sense of progress, Rudd noted, with the real degree of improvement only measured in the context of an actual conflict.

“If there was a crisis in the South China Sea tomorrow, what would Japan do, what would Australia do and what would India do, militarily?” he asked, adding that, for New Delhi, deployment to active-conflict zones is “something currently at the outer reaches of the parameters of the possible.”

Tanvi Madan, a senior fellow at the Brookings Institution, said India is also “hedging against uncertainty about the U.S.” and pursuing defense arrangements with a number of states to better prepare against threats like China. That’s why observers shouldn’t fail to note where India deepens other bilateral relations, even with U.S. rivals, as exemplified by the recent summit between Indian Prime Minister Narendra Modi and Russian President Vladimir Putin, and the Indian military’s acquisition of more Russian hardware.

In response to American complaints about this deal, Indian officials have pointed out that increasing the country’s defense capacity does not harm shared interests. Madan added that not only does Moscow offer New Delhi weapons that Washington can’t or won’t, but completely undoing ties with Russia would also severely hamper the Indian military’s ability to maintain its existing stock of equipment and present a credible deterrent to Beijing.

“It’s not about poking the U.S. in the eye,” she said, adding that New Delhi has an interest in putting political “daylight between Russia and China” as India seeks to avoid isolating Moscow and forcing the formation of a Sino-Russian bloc.

Experts agreed that the key factor in the course of the American alliance system in Asia is the Chinese economy, which could give the United States a unique opening given China’s current market struggles.

“If ever there was a strategic opportunity for the United States to re-enter the geoeconomic field, it’s now, as the Chinese economy begins to soften,” said Rudd.

Neighboring powers need trade with China to support their economies, and Beijing hopes to use this imperative to anchor regional influence over the long term regardless of whatever steps Washington might take to draw countries out of China’s orbit. The experts we spoke to agreed that Biden could seriously stymie China’s gambit for economic dominance by deepening commercial ties in the region, perhaps by creating or joining a massive free trade pact among regional powers such as the new iteration of the Trans-Pacific Partnership, created after the United States walked away from a similar accord in early 2017. It’s worth mentioning that the purpose of the original TPP was, in part, to curb China’s economic advantages.

And it’s about more than just money, said Weifeng Zhong, a senior research fellow at the Mercatus Center at George Mason University. Signing trade agreements with states that feel caught between Beijing and Washington gives the United States skin in the game, so to speak, and signals commitment to the defense of allies more effectively than rhetoric alone. Zhong even suggested an American trade agreement with the Taiwanese government could help deter an attack from the mainland.

The question, in Asia as elsewhere, is whether the Biden administration has the political capital at home to advance bold policy abroad.

Related: America Is Experiencing a Biden Bump Abroad, but It’s What Allies Fear That Matters Most
International Economics Russia-Ukraine Conflict