NBA, NHL Attendance Lags Behind Pre-Pandemic Pace — And Might Get Worse Before It Gets Better 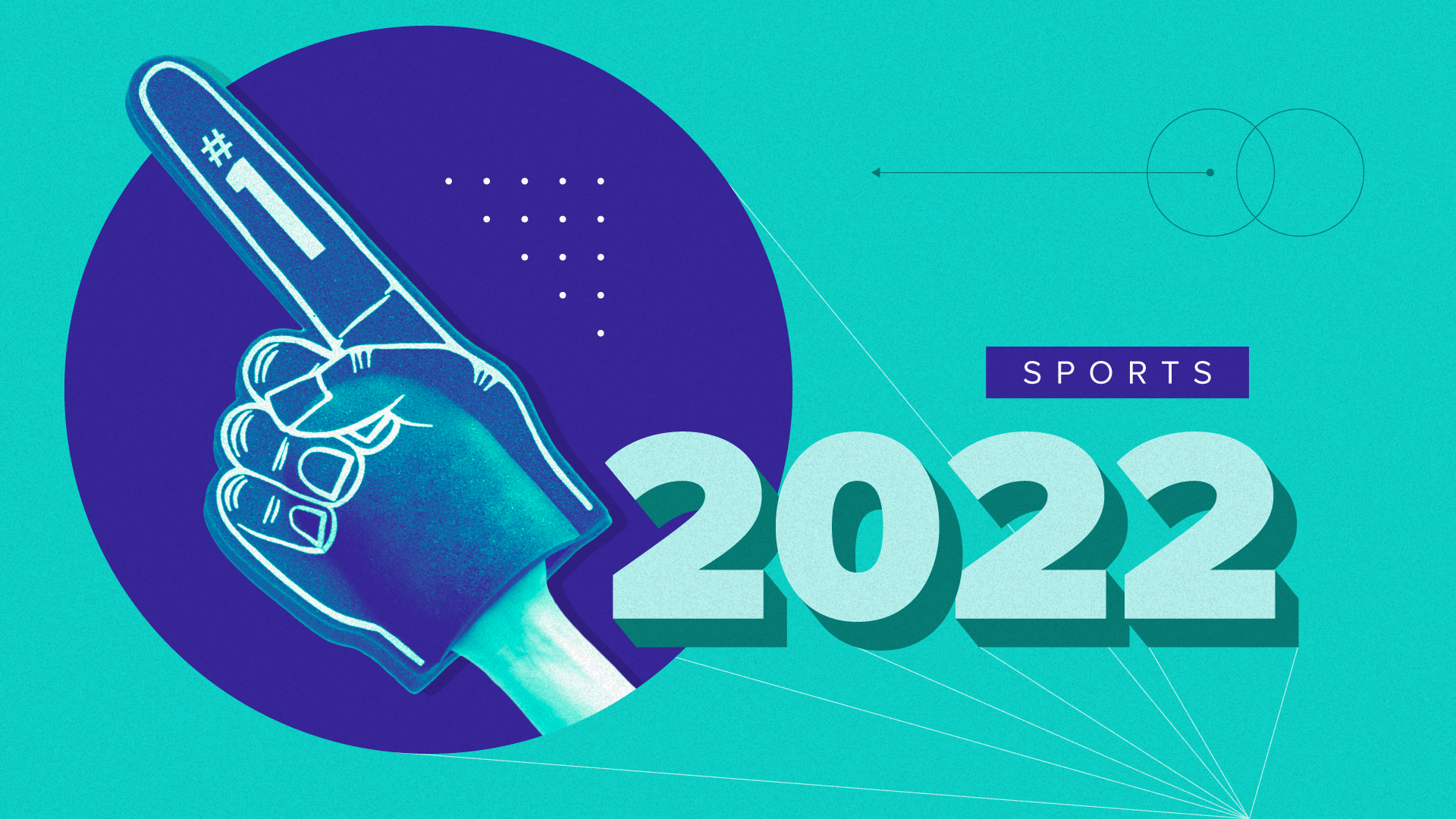 According to a Dec. 16-19 survey, 44 percent of U.S. sports fans said they would feel comfortable attending an indoor sporting event given the state of the COVID-19 pandemic. (Getty Images / Morning Consult artwork by Kelly Rice)
By Alex Silverman

The start of the 2021-22 season marked a major milestone for the NBA and NHL in their respective returns to normal from the COVID-19 pandemic, with teams in both leagues doing away with capacity limitations at their arenas. While both leagues have come a long way from playing in empty venues, neither has seen attendance return to pre-pandemic levels.

Amid the current spike in COVID-19 cases related to the emergence of the highly contagious omicron variant, outbreaks among players and team personnel forced the NHL to pause its season and start its holiday break two days early, bringing the number of games postponed to 49. The NBA has postponed seven games so far and appears determined to play its five-game Christmas Day slate as scheduled.

But amid this latest coronavirus wave, only three NHL teams and one NBA team — all based in Canada — have reinstated capacity limits or played without fans altogether.

Before those measures were taken, average NBA attendance in 2021-22 was down 4.9 percent from the equivalent point in the 2019-20 season, according to data compiled by Sports Business Journal. Average NHL attendance was down 5.9 percent, even with this year’s average being boosted by the entrance into the league of the expansion Seattle Kraken and the New York Islanders’ move to a larger arena.

Continued reluctance to attend live sporting events appears to be a significant factor in the declines. According to Morning Consult’s most recent Return to Normal tracking data (which will be published in full on Wednesday), less than half of self-identified sports fans (44 percent) said they’re comfortable attending indoor sporting events.

By comparison, 59 percent of fans said in the Dec. 16-19 survey that they would be comfortable attending an outdoor game, which has left the NFL in a better position than the NBA and NHL. NFL teams have actually seen a 1 percent uptick in attendance through games played Sunday, or a 1.2 percent decline, excluding the Los Angeles Chargers and Las Vegas Raiders, which have moved into larger stadiums since the 2019 season.

Since June 2020, Morning Consult has asked 2,200 U.S. adults each week whether they would be comfortable engaging in a wide range of activities, including attending sporting events, given the current state of the COVID-19 pandemic. Distinctions for indoor and outdoor sporting events were added to the weekly surveys in January. 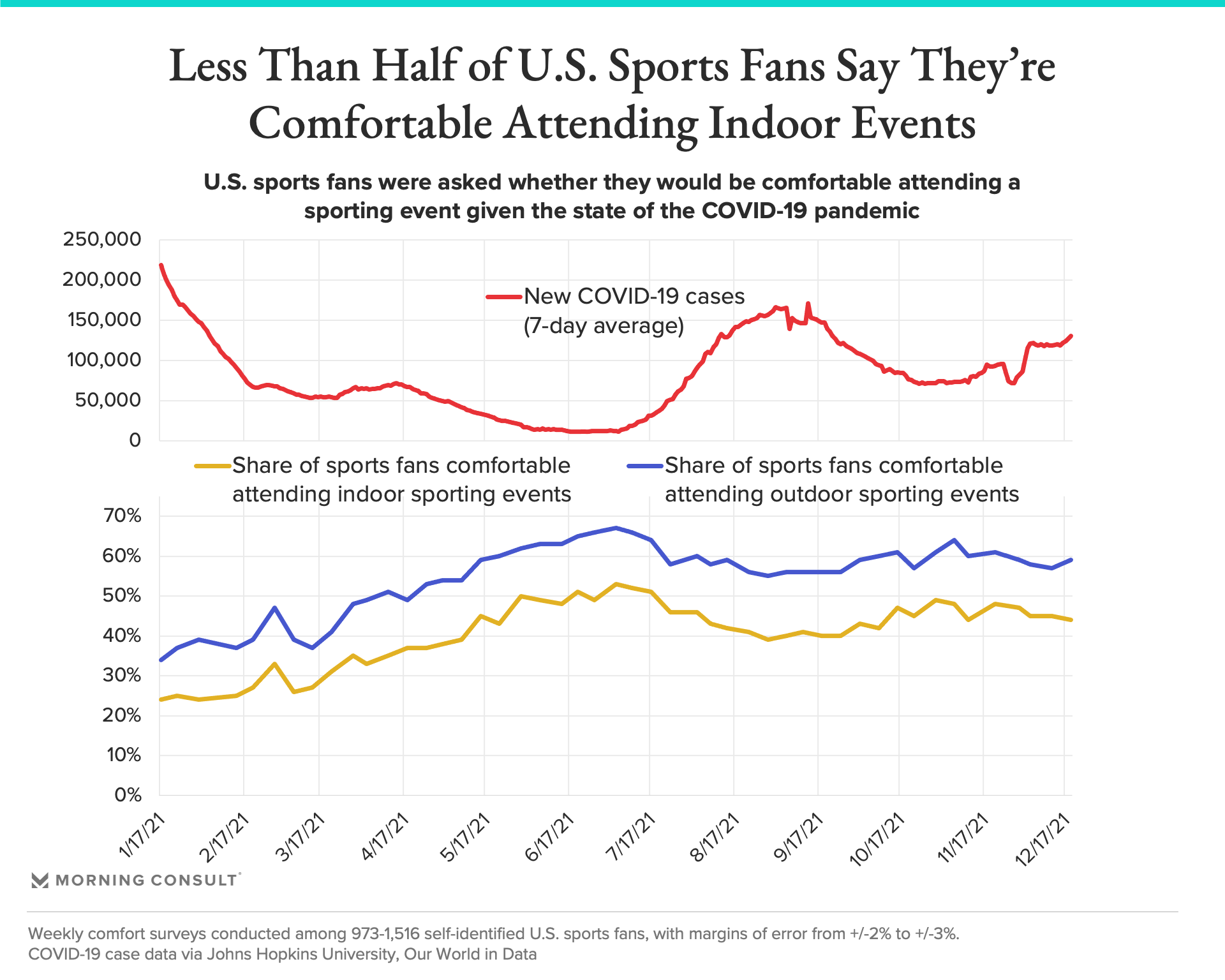 The share of sports fans willing to go to an indoor event peaked at 53 percent in early July 2021 after steadily increasing during the first half of the year amid the proliferation of vaccines. When cases and deaths started rising again due to the emergence of the virus’ delta variant, however, comfort among sports fans for indoor events took a downturn, falling to 39 percent by the end of August.

Since the start of October, a period that includes the early portions of both the NHL and NBA seasons, the share of sports fans comfortable attending an indoor event has fluctuated between 44 percent and 49 percent. The discovery of the omicron variant in late November has had little impact so far. 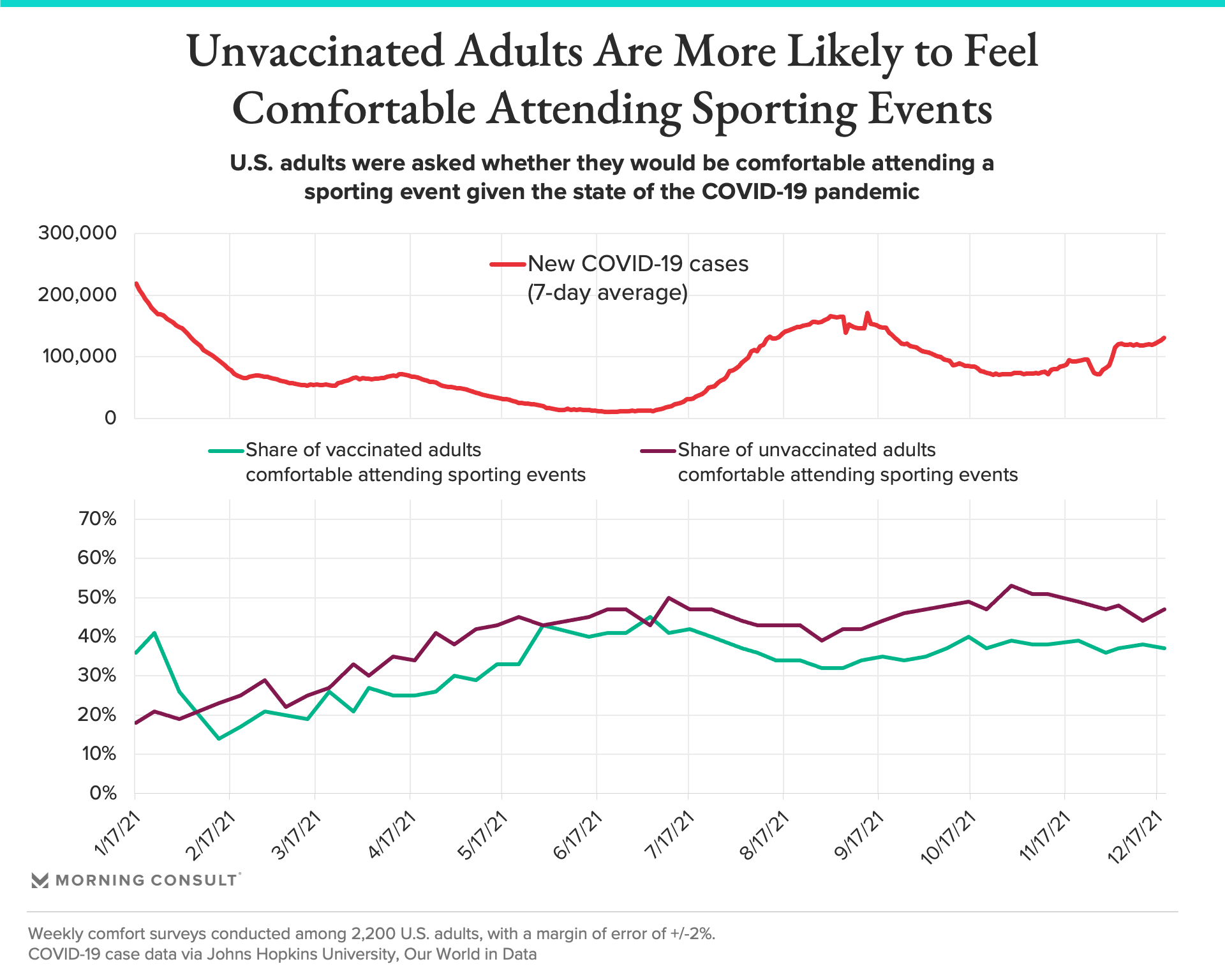 Teams are now faced with a Catch-22 in figuring out how to address fans’ reluctance. While establishing more stringent COVID-19 protocols might seem like the logical answer, Morning Consult data shows that unvaccinated adults are actually more comfortable attending events than vaccinated adults, meaning vaccination requirements might alienate a larger group of potential attendees in some markets. 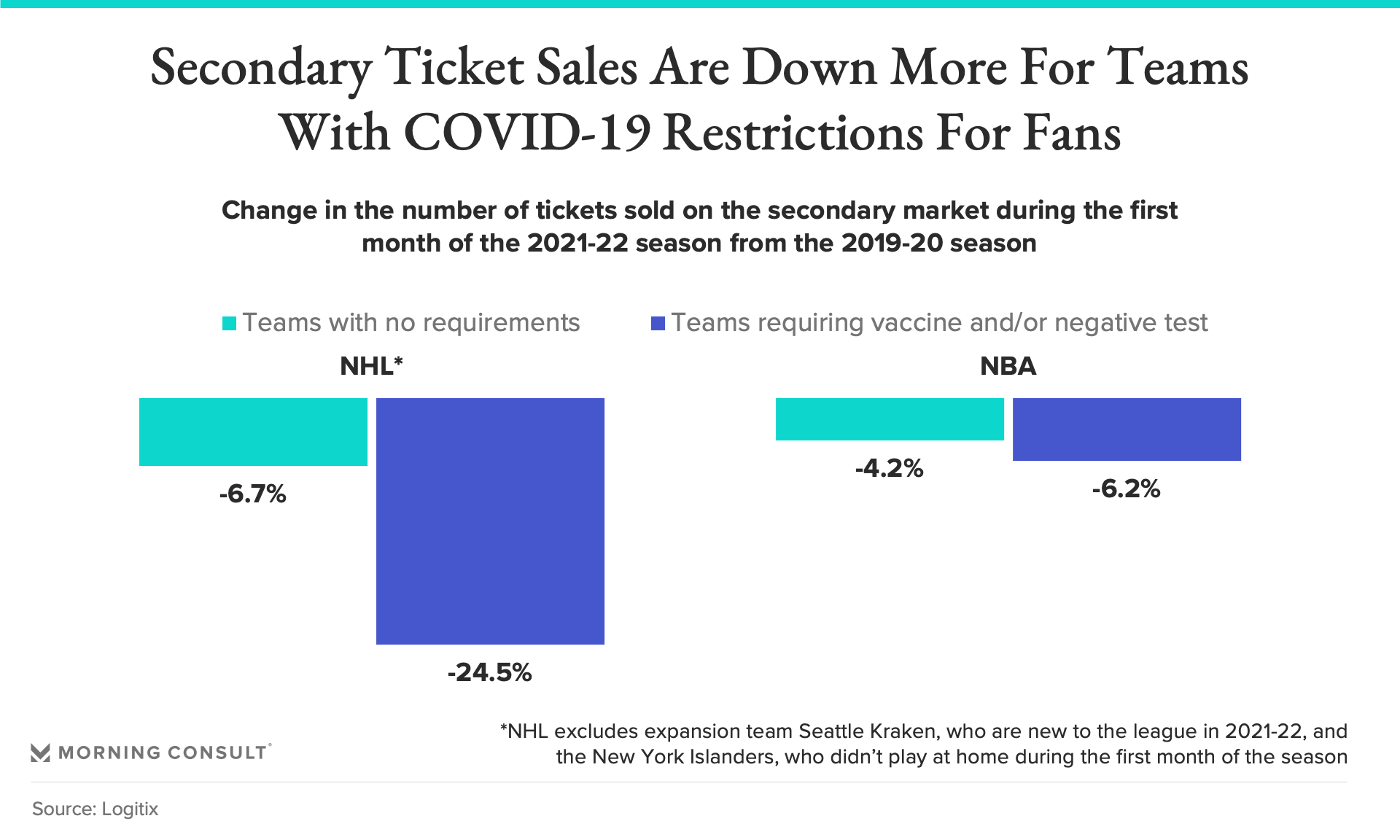 In fact, secondary market data from ticketing platform Logitix indicates that teams requiring proof of vaccination or a negative test for admittance experienced a worse average decline in tickets sold during the first month of the NHL and NBA seasons than teams without requirements. The difference was particularly stark in the NHL, which has seven teams based in Canada, generally a more coronavirus-cautious country with tighter restrictions than the United States.

Maureen Andersen, president and CEO of the International Ticketing Association, a nonprofit membership group for industry professionals, said that whether COVID-19 protocols are an incentive or a deterrent likely varies depending on where in the United States (or Canada) a team is based. She noted that teams that are performing particularly well on the court or ice have been more resistant to the broader downturn.

Four NBA teams have seen attendance rise by at least 1 percentage point from 2019-20, with the Chicago Bulls leading the way with a 10.8 percent surge. In the NHL, only the Islanders have seen a significant bump, up 34.7 percent so far in the new UBS Arena despite the team’s on-ice struggles.

Andersen said that many ticket sales professionals in sports are reporting a significant increase in no-shows — those who purchased tickets but don’t come to the game — from before the pandemic.

“It could be as high as 20 to 50 percent of season ticket holders who have tickets but are not coming, and it is all over the map as to why,” Andersen said. “And it doesn’t seem to be driven necessarily by price or by seat.”

Tony Knopp, CEO of event management software company TicketManager, told Sportico last month that while a typical scan rate for a sporting event in 2019 was 70 percent, he is now seeing some rates dip below 40 percent.

Heading into 2022, Andersen said she expects the outlook for live events to get worse before it gets better. January and February tend to be tough months for ticket sales in non-pandemic years, while the spread of the omicron variant could impact consumer comfort and lead to the implementation of stricter protocols in some jurisdictions. There are also concerns about economic conditions.

“There is a trend that ticket prices have increased and probably will continue to increase,” Andersen said. “What does that do when you’re in inflation the way the United States is in inflation right now?”

U.S. adults were asked five questions related to personal finances and business conditions in the country as a whole, with higher numbers indicating greater consumer confidence

Kayla Bruun, an economic analyst at Morning Consult, described the economic picture as a mixed bag when it comes to forecasting spending on discretionary services like live sports and entertainment. She said that inflation resulting from supply chain issues amid the holiday shopping season has caused discretionary spending to skew toward goods and away from services.

The good news for the industry is that, according to Morning Consult’s Indices of Consumer Sentiment and Current Conditions, the impact of COVID-19 surges on consumer confidence seems to be waning as the pandemic drags on. The omicron variant, she said, has had little impact thus far.

“For each COVID case surge that we’ve seen, people have become more resilient over time, so sentiment has fallen less for each of those surges,” Bruun said. “That’s a positive sign in terms of people’s willingness to still go out and spend on discretionary categories in general.”

Bruun also pointed out that the labor picture has improved over the past few months, which could result in more discretionary spending in the near future.

“The employment to population ratio overall has been rising,” she said, “so that means more people earning wages, higher incomes and more ability to spend.”

Despite the uncertain picture as winter starts, Andersen projected that pent-up demand for going out and being around other people will drive a ticket sales resurgence in the spring, specifically citing baseball teams as beneficiaries.

Most importantly, she is confident that the live events industry will do everything in its power to avoid shutting back down.

“What I can tell you is that the doors are open, and we’re doing it,” Andersen said. “We’re not going back. That’s the good news.”