The Republican Party’s Image Has Recovered From the Fallout of Jan. 6

Voter sentiment about the GOP, and Trump himself, has bounced back over the past year 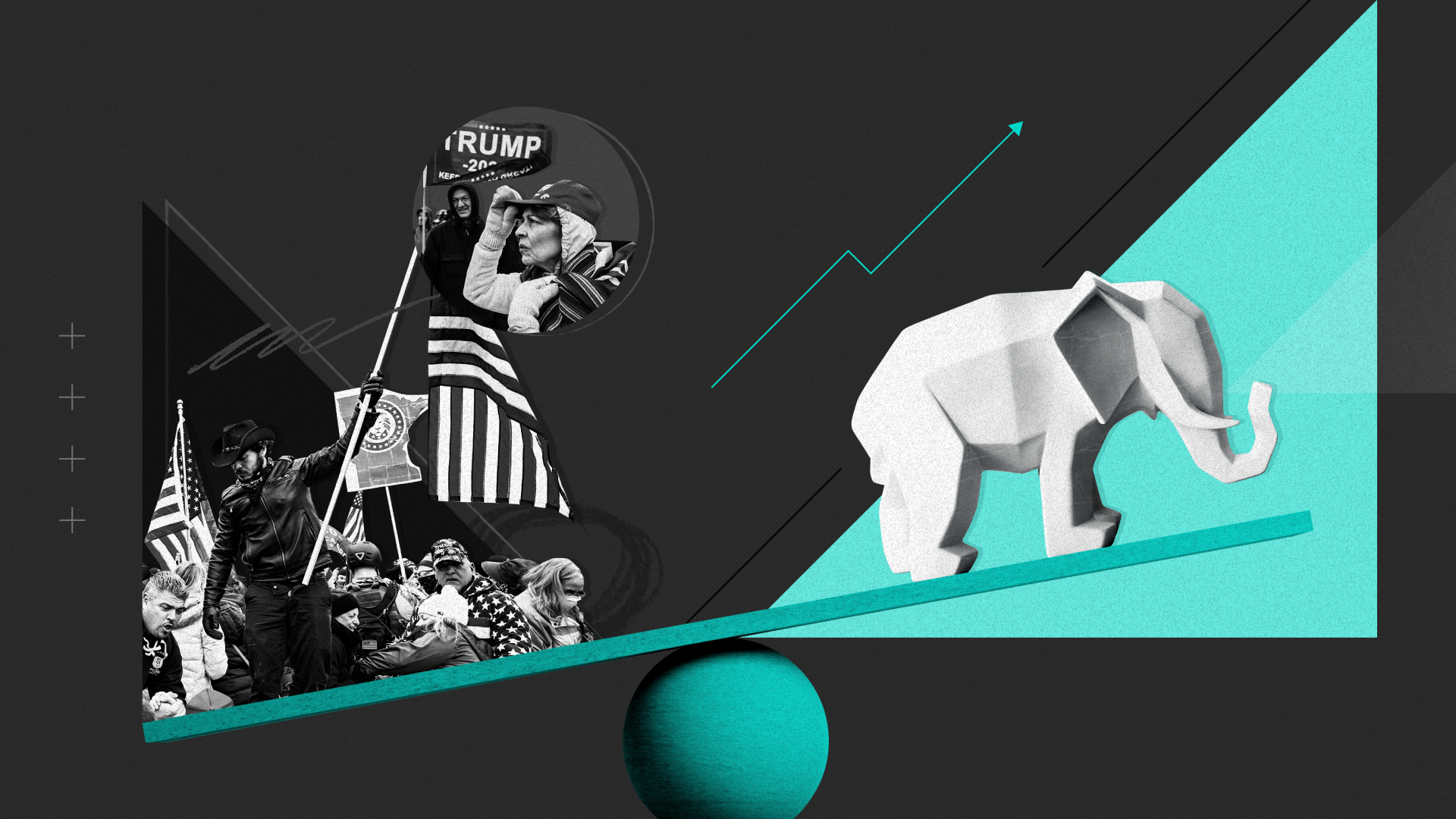 Former President Donald Trump’s efforts to overturn the 2020 presidential election — culminating in the deadly riot that sought to block Congress’ certification of President Joe Biden’s victory on Jan. 6 — marred voters’ views on the state of the GOP and prompted questions about whether it could recover in the future.

A year later, Morning Consult trend data paints a clear picture: It has. There is no lasting stain on the Republican brand, and though most voters continue to blame Trump for the events as a congressional probe moves through his orbit and homes in on him, they do not appear ready to punish Republicans for the attack on American democracy.

Between August 2020 and immediately after Trump’s supporters raided the Capitol, the share of voters who said the GOP was headed in the “right direction” fell from 32 percent to 24 percent, driven largely by Republicans and independents. But now, sentiment about the Republican Party’s trajectory is slightly better than it was before Jan. 6.

A Year From Jan. 6, More Voters See the GOP Headed in the Right Direction

According to the latest data, gathered Dec. 18-20 among 2,000 registered voters ahead of the anniversary of the Jan. 6 attack, 34 percent say the Republican Party is headed in the right direction, matching voter optimism toward the Democratic Party’s own tack. Though improvement was observed across the partisan aisle, it was most notable among Republicans, 65 percent of whom say their party is headed in the right direction — up 14 percentage points since January 2021.

That isn’t to say Republicans are escaping voters’ blame for what happened at the Capitol.

Share of voters who said the following were at least somewhat responsible for the events that led to a group of people attacking the Capitol on Jan. 6, 2021

According to the latest survey, 59 percent of voters said Trump is at least somewhat responsible for the events that led to a group of people attacking the Capitol on Jan. 6, while 47 percent blamed Republicans in Congress. Both figures are down slightly from a year ago.

But public opinion doesn’t happen in a vacuum. More voters have reason to believe that the GOP is on the right track given the conventional wisdom supporting their chances for midterm election victories, and as America gets further away from the Capitol attack, some of the improvements reflect voters’ reactions to a year of full Democratic control of Washington and displeasure with Biden.

Since the weekend after the Capitol attack, for example, Trump has seen his unfavorability rating drop from 63 percent to 51 percent in a Morning Consult/Politico survey conducted Dec. 18-20. That poll found 44 percent of voters hold favorable views of the former president, higher than earlier in the year and similar to Biden’s own standing.

But there’s another reason explaining the lack of a Jan. 6 stain on the GOP’s record: Democrats are simply far more likely than other voters to think of the Capitol attack as a seismic event.

Only Democrats Give Major Weight to Jan. 6 Attack

Share of voters who said the following events had a “major impact” on their worldview:

Roughly 7 in 10 Democratic voters said the events of Jan. 6 had a “major impact” on their worldview, compared with about a quarter of Republicans and just over a third of independents.

Where Washington goes from here

Trump’s improved popularity, the modest declines among those who blame him and his allies in Congress for the Jan. 6 attack, and the recovering sentiment about the state of the Republican Party suggest the insurrection may be far from most voters’ minds heading into the midterms.

Indeed, nearly half of voters (47 percent), including a similar share of independents, said they don’t expect the events of last January to have any impact on their votes in November, even though two-thirds of voters say it’s important for the federal government to investigate Jan. 6 and three-fifths support the idea of a congressional commission.

But as a special House committee established by House Speaker Nancy Pelosi (D-Calif.) has ramped up its largely behind-the-scenes work to investigate the Jan. 6 attack, public support for the committee’s handling of the job has waned since its inception. 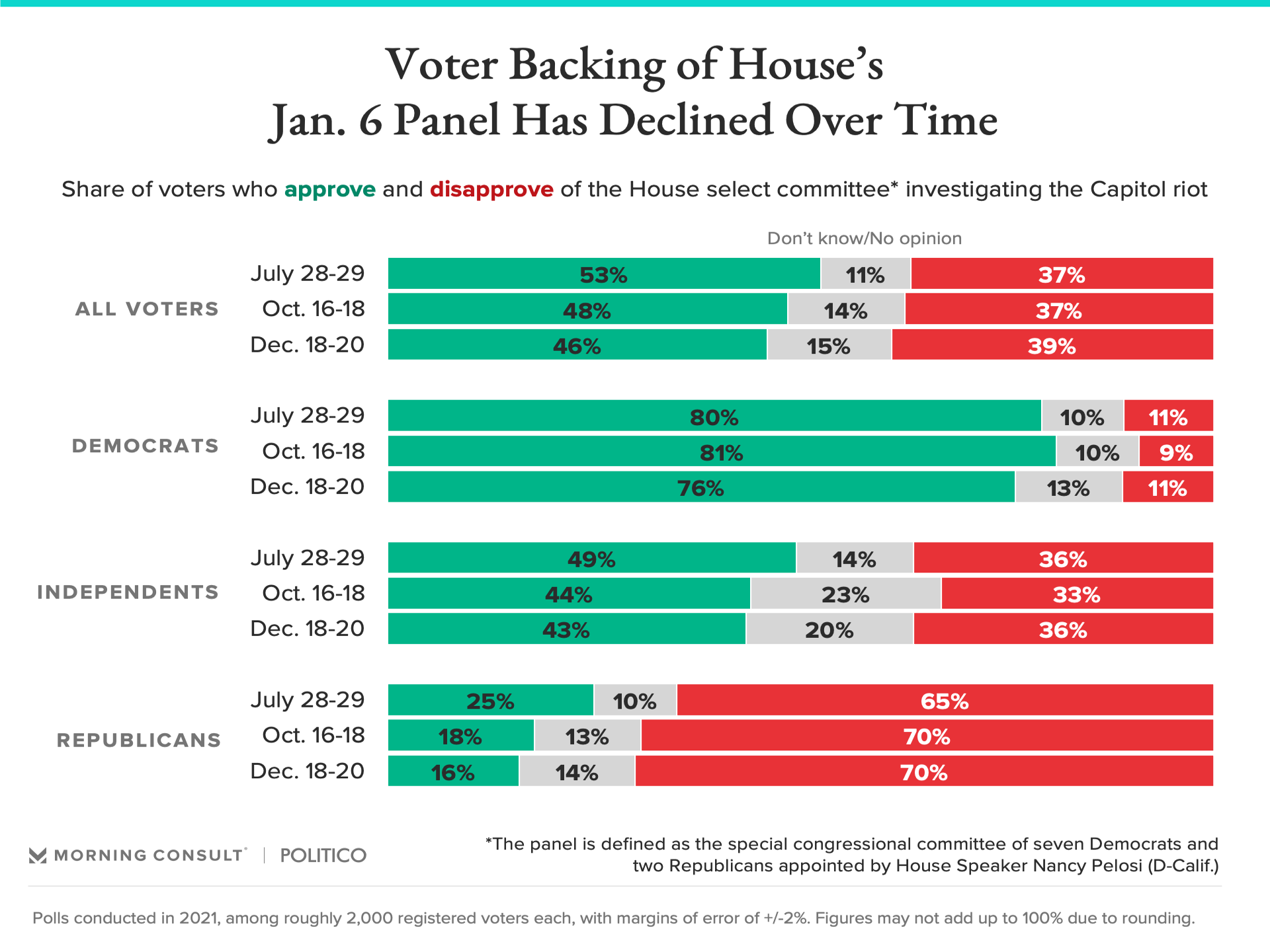 Since July, the share of voters who say they approve of the select committee has fallen 7 points to 46 percent, fueled by declining support among Democrats, independents and Republicans, all of whom have become more likely to express uncertainty about an investigation that has often failed to capture their attention on a large scale. And as the House panel continues to pursue documents and witness testimony, roughly 2 in 5 Democrats and independents say its investigation is moving too slowly.

Overall, the trends signal a weariness verging on disinterest in the Jan. 6 Capitol attack one year later, as the midterm elections inch closer and Republicans at all levels of government continue to telegraph their intent to challenge the legitimacy of future electoral contests.

Related: Most GOP Voters Want Trump to Run Again, but Among Those Who Don’t, Pence and DeSantis Are the Leaders
Congressional Politics Jan. 6