Overdrafted, Underbanked and Looking for New Providers: A Deep Dive Into Consumers Who Overdrafted in 2021 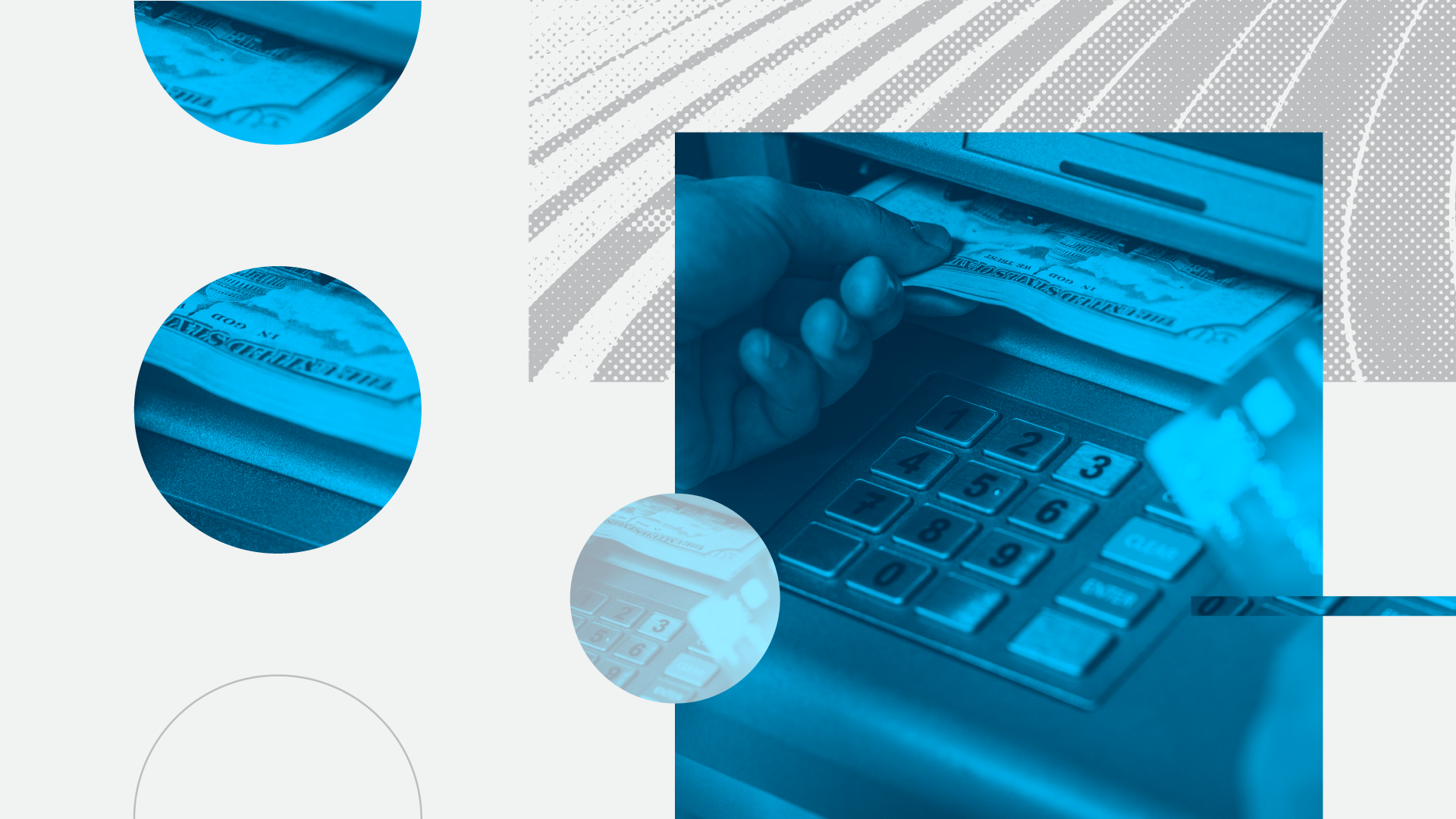 Amid some banks’ and credit unions’ changes to their overdraft policies — including eliminating fees altogether — reports of consumer overdrafts have risen. Eighteen percent of adults with a bank or credit union account overdrafted in December, according to the latest Morning Consult data, and they tended to be younger, parents and experiencing income volatility.

Banks have collected billions of dollars in overdraft fees in recent years, but the demographic makeup of these overdrafting consumers has been murky. Several months of Morning Consult polling data reveals that overdrafts are rising; below, we take an in-depth look at which adults are most likely to overdraft and how they’re thinking about their financial provider relationships.

Nearly one in five consumers (18 percent) with a bank or credit union account reported overdrafting an account in December, up from 14 percent in August. Two-thirds of those who overdrafted in December say they paid a fee as a result. This comes as banks are under increased scrutiny for their overdraft practices, with many announcing increased overdraft protections (PNC Bank) or the elimination of fees altogether (Capital One and Ally Bank).

But banking leaders shouldn’t necessarily attribute this rise to consumers taking advantage of overdraft forgiveness. The end of the year presented several payroll events that made it more likely for consumers to overdraft.

Overdrafters are disproportionately millennials, parents and those experiencing income volatility 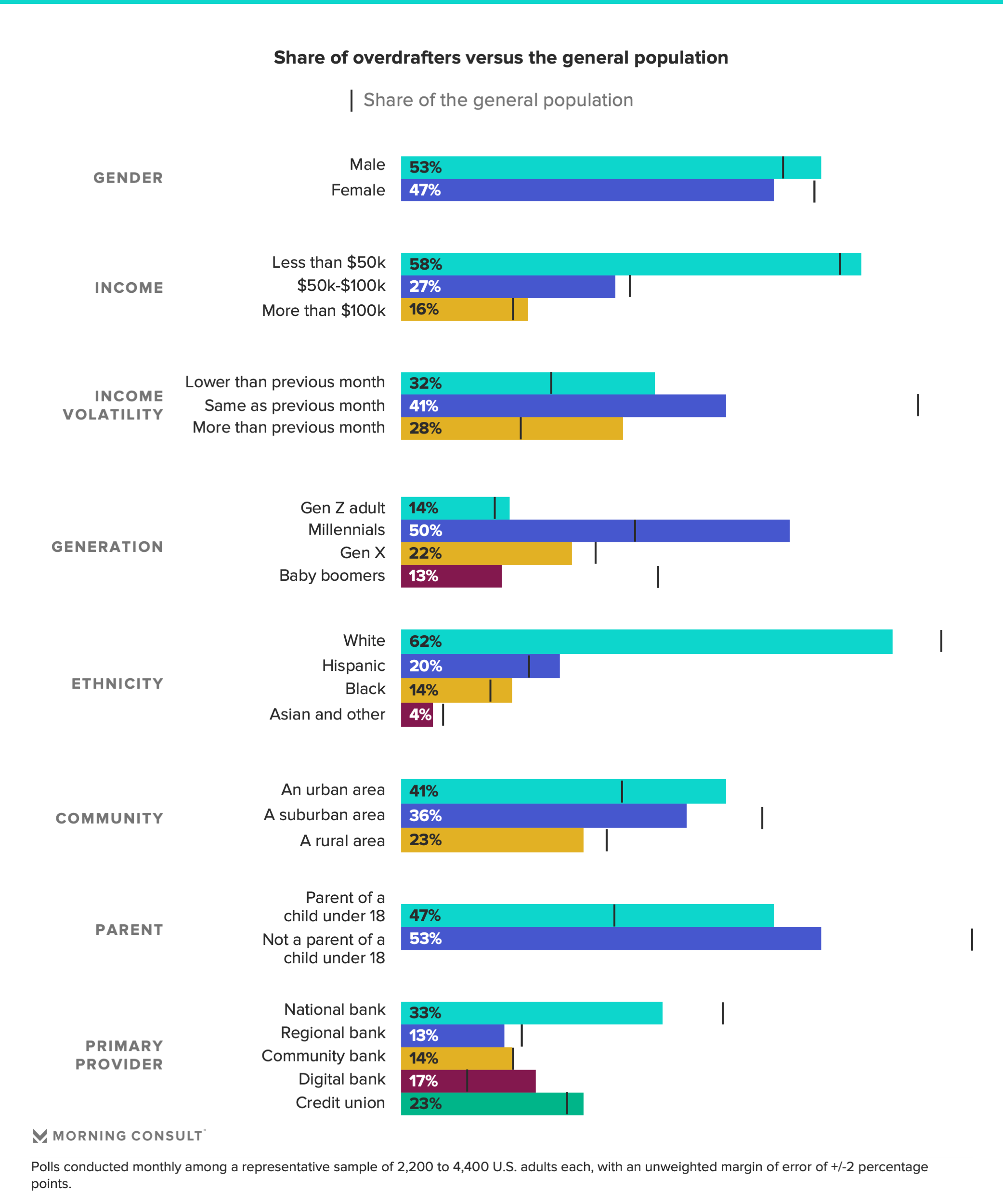 Although they make roughly the same amount of money, overdrafters are more likely to report that their income varies from month to month, which certainly contributes to their tendency to overdraft. But overdrafting alone isn’t enough to smooth their finances; these consumers are also more likely to use alternative financial services such as payday loans to make ends meet.

Overdrafts are often defended as a service to consumers: For a fee, they can receive a short-term loan from their bank, helping them avoid the inconvenience of a declined card or the need to resort to costly alternative financial services.

But overdrafters end up using these services anyway, at more than double the rate of the general population. More than one in five adults (21 percent) who have overdrafted since August also reported receiving a payday loan, and roughly the same share reported either purchasing a money order or cashing a check through a provider other than a bank or credit union.

In the coming months, more — and possibly larger — banks may announce increased overdraft protections. But banking leaders hoping to make up in customer loyalty — or an improved reputation — what they lose in overdraft fees shouldn’t be too quick to assume their overdrafting customers will stay.

The ability to overdraft at all (as opposed to having payments declined) was originally touted by banks as an attractive service, but for consumers today, it may be dampening their loyalty toward their providers. Those who have overdrafted are more likely to be thinking about starting a relationship with a new provider in the next six months.

Respondents were asked if they plan to start a relationship with a new provider of the following in the next six months:

Over a third of consumers (37 percent) who report overdrafting say they are thinking of starting a relationship with a new bank in the next six months, more than double the share of the general population that said the same. Credit unions and digital banks are not immune — that pattern holds for those institutions as well.