Voters Are Divided Over Changing the Senate’s Rules for Voting Rights, but Most Back Changes to the Electoral Count Act

62% of Democrats back a filibuster carve-out for voting rights legislation, while the overall electorate is divided 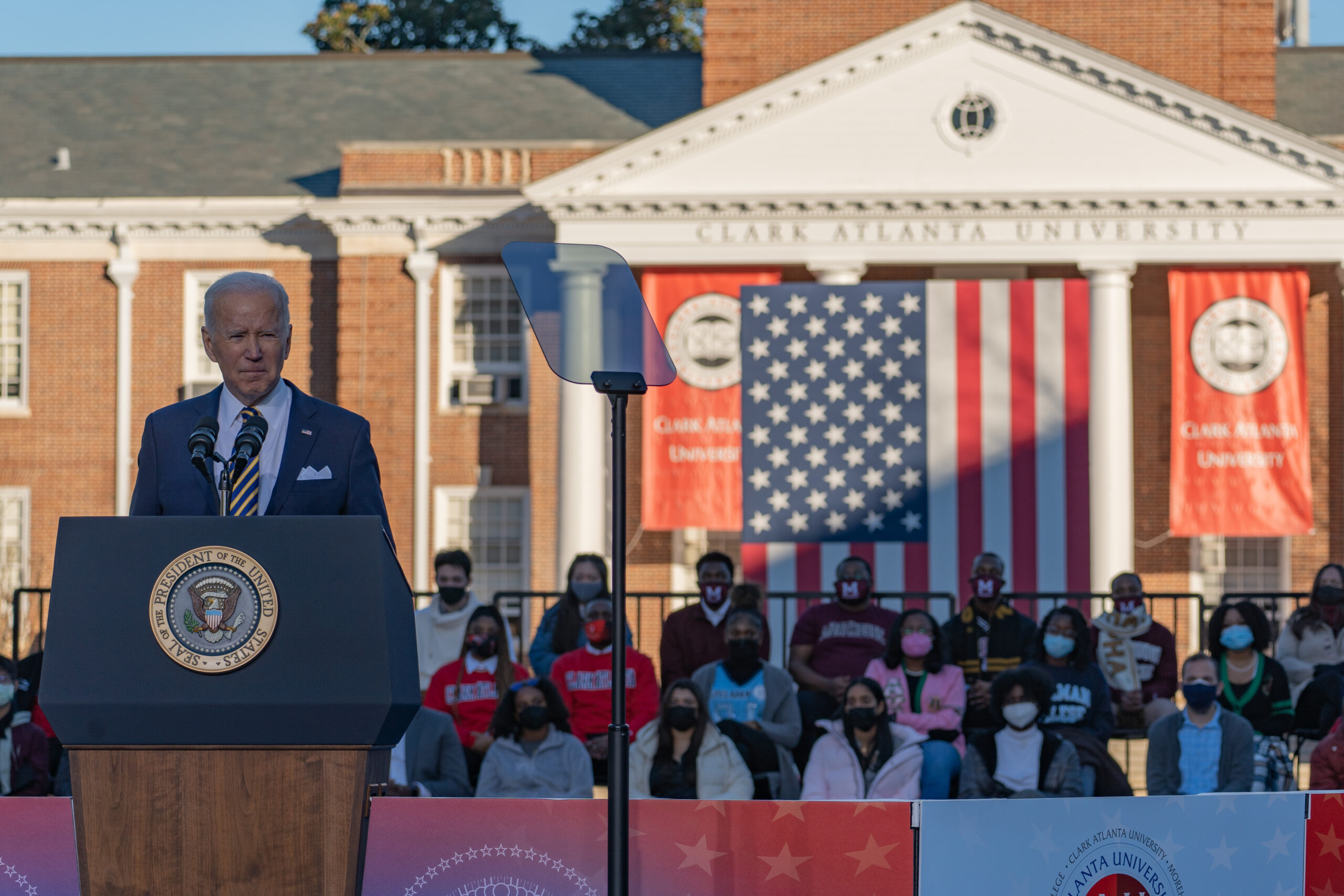 President Joe Biden on Tuesday speaks to a crowd at the Atlanta University Center Consortium, part of both Morehouse College and Clark Atlanta University. During the speech, Biden endorsed changing the Senate's rules in order to push through Democratic-backed changes to voting rights and election administration, a push that divides the electorate, according to a new poll. (Megan Varner/Getty Images)
By Eli Yokley

As the Senate turns its attention to voting rights and election governance, a new Morning Consult/Politico poll shows measures to strengthen American suffrage and clarify Washington’s role in counting Electoral College votes are quite popular, but it’s only Democratic voters who are sold on changing the Senate’s rules to get those changes enacted.

Where voters stand on the filibuster

Democrats Most Likely to Support Filibuster Carve-Out for Voting Rights

As previously noted, views on the filibuster largely depend on how the question is asked. For example, voters are split almost evenly when asked whether they think legislation should have at least 51 votes or at least 60 votes in order to pass the Senate, while more voters than not support it when they are asked whether 60 senators should have to agree to allow a final vote on a piece of legislation.

Senate Majority Leader Chuck Schumer (D-N.Y.) has brought the filibuster debate front and center by vowing to force a vote on the issue by Monday if Senate Republicans continue to block consideration of the Democrats’ voting rights legislation.

Related: How Popular Is the Senate Filibuster? It Depends on How You Talk About It

For the first time on Tuesday, President Joe Biden endorsed Schumer’s push, saying in Atlanta that he supports “changing the Senate rules whichever way they need to be changed to prevent a minority of senators from blocking action on voting rights.” But barring a change of heart from a handful of senators — most notably from Sen. Joe Manchin (D-W.Va.), who has come out against rule changes without Republican support — Schumer’s effort is destined for failure.

While the broader electorate is divided over altering the Senate’s rules for Democrats’ voting priorities, a number of proposals — including one that has drawn the interest of top Senate Republicans — fare quite well in the court of public opinion.

Sixty-three percent also back requiring states with a recent history of voting rights violations to get permission from the Department of Justice before making any changes to voting practices, the main thrust of the Manchin-backed John R. Lewis Voting Rights Advancement Act, including 58 percent of Republicans.

But the Freedom to Vote Act, in particular, faces united opposition from Republicans on Capitol Hill and is also unpopular with the GOP base nationwide, with majorities opposing provisions to expand access to voting by mail (64 percent), automatic voter registration (56 percent) and same-day voter registration (53 percent).

Despite that opposition, a handful of Republican senators – including Minority Leader Mitch McConnell of Kentucky and Minority Whip John Thune of South Dakota – have opened the door to a targeted measure to amend the Electoral Count Act of 1887, the ambiguities of which Trump sought to exploit on Jan. 6, 2021, as part of his effort to overturn Biden’s victory with his Republican allies in Congress.

Majority of Voters Back Clarification of the Electoral Count Act

Voters were asked if the Electoral Count Act of 1887 should be changed to clarify that the vice president cannot reject state-certified electoral votes in U.S. presidential elections

The majority of voters (55 percent) say the Electoral Count Act should be changed to clarify that the vice president cannot reject state-certified results when Congress meets to count the votes, including the bulk of Democrats, independents and Republicans.

But the poll also found a lack of consensus among voters when it comes to what Congress should be prioritizing.

Voters were asked which of the following should be the top priority for Congress to pass, if any:

Roughly a third of voters said neither Electoral Count Act reforms, expanding voting access or enhancing oversight of state elections laws should be a “top priority” for Congress, including 2 in 5 independents and 46 percent of Republicans.

Among Democratic voters, the greatest share (44 percent) said Congress should prioritize expanding voting access in federal elections, mirroring leaders’ inclination to take on voting rights nationwide rather than the congressional certification issue, which won’t come into play again until 2025.

Jan. 6 anniversary as a catalyst

After early measures to address voting were blocked by Senate Republicans, Democrats shifted most of their messaging focus and political capital to advancing the now-stalled Build Back Better Act. But coming out of the holiday break with no apparent path forward for the president’s social spending and climate agenda, Biden and Schumer have pivoted to election administration, framing their desired changes in the context of the Jan. 6 Capitol attack, when Trump and his supporters sought to overturn the 2020 presidential election.

“The former president and his supporters are trying to rewrite history. They want you to see Election Day as the day of insurrection and the riot that took place here on January 6th as the true expression of the will of the people,” Biden said in remarks from the Capitol, preceding his pivot to voting rights this week. “Can you think of a more twisted way to look at this country – to look at America?”

Voters See Jan. 6 as a Bigger Pox on the Constitution Than the 2020 Election by a 2-to-1 Margin

Voters were asked which was a greater violation of the U.S. Constitution, the 2020 election or the Jan. 6 attack on the Capitol

Like Biden, just under half of Americans (47 percent) see the Jan. 6 insurrection as the greater violation of the U.S. Constitution, while 22 percent say the same of the 2020 election. Another 15 percent of voters say both events equally violated the country’s foundational creed.

As previous surveys have shown, Democratic voters are far more likely than others to cast Jan. 6 as a big deal, with 77 percent calling it a violation of the Constitution compared with 42 percent of independents.

Republican voters were twice as likely to call the contest that resulted in Biden’s victory an infraction than the attack that sought to overturn it, 43 percent to 19 percent.

Many congressional Republicans panned Biden’s anniversary speech at the Capitol, accusing him of using a tragedy for political gain and dividing the country as a result. Asked whether Biden has done more to unite or divide the country since taking office, 49 percent said the latter compared with 36 percent who said the former.

More than 4 in 5 Republicans and 53 percent of independents said Biden has been more divisive than unifying, while 67 percent of Democrats said he has been more of a unifier than a divider.