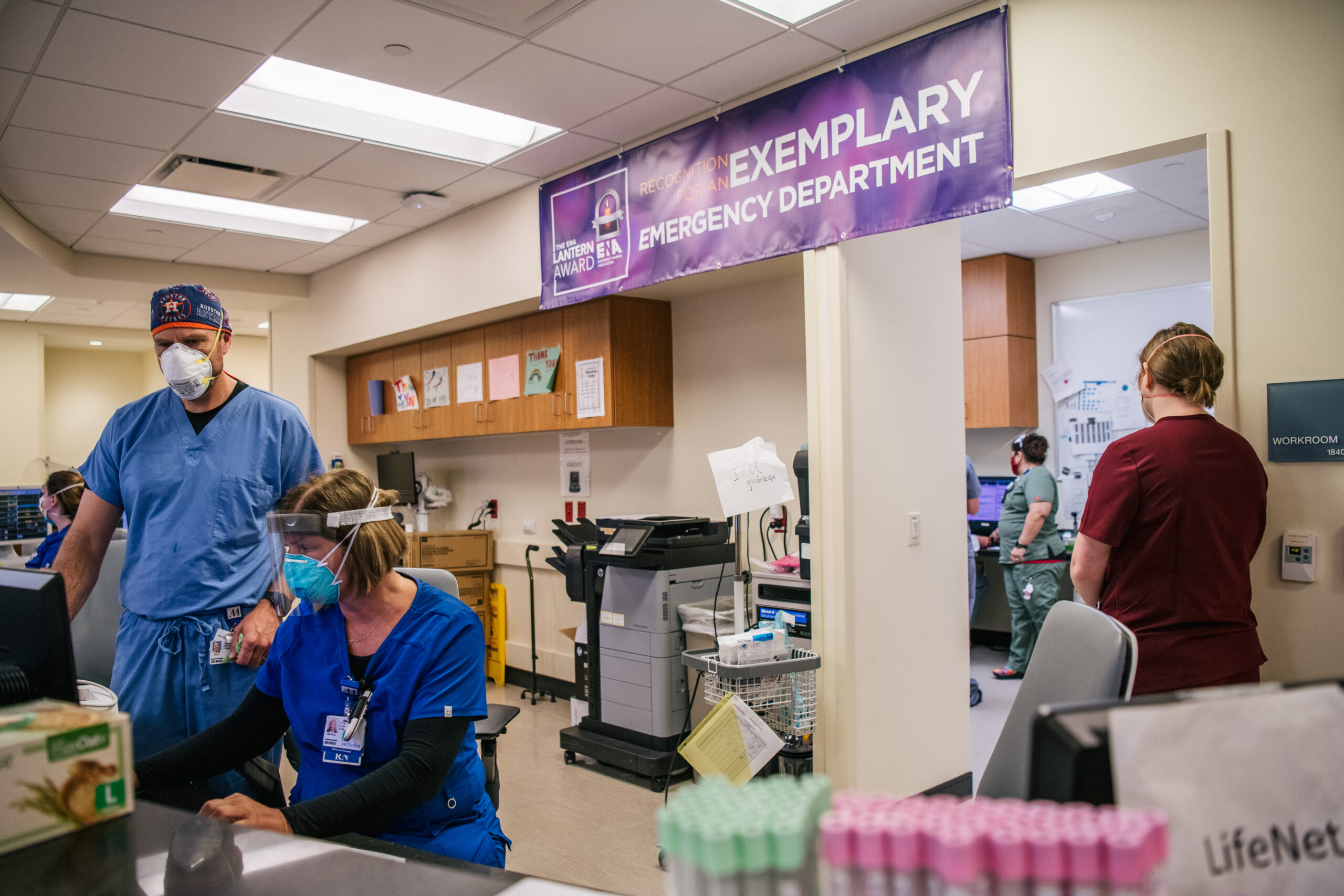 Doctors and emergency room nurses are shown working together at the Houston Methodist The Woodlands Hospital on Aug. 18, 2021, in Houston, Texas. A new Morning Consult poll found 61 percent of U.S. adults said they are concerned about getting a surprise medical bill from the emergency room. (Brandon Bell/Getty Images)
By Gaby Galvin

A third of U.S. adults say they or their family has received an unexpected health care bill in the past two years, according to new Morning Consult data that comes as a federal ban on surprise medical billing takes effect this month.

The new surprise billing protections, which Congress passed in late 2020, bar health insurers from charging patients the balance when they’re provided emergency services from doctors and hospitals that they don’t realize aren’t covered under their health plan. Instead, payers and providers are expected to work it out among themselves.

The law doesn’t apply to non-emergency services offered outside of a hospital, meaning patients could still be subject to unexpectedly high charges from other providers if they don’t do their homework to ensure they’re covered. Even so, the poll indicates that in the new rule’s early days, the public is much more concerned about receiving a surprise bill from the emergency room (61 percent) than from other providers — and that some adults are hesitant to seek care or are skipping it altogether as a result.

“By the very nature of emergency services, you’re not looking up if a facility or provider is in-network,” said JoAnn Volk, co-director of the Center on Health Insurance Reforms at Georgetown University. As surprise billing becomes less common in hospitals and ERs, she said that other settings, like urgent care centers, may take up more of the public’s concern.

Poll conducted Jan. 8-9, 2022, among a representative sample of 695 U.S. adults who received an unexpected medical bill or had family that received one within the past two years, with an unweighted margin of error of +/-4 percentage points.

Where unexpected bills are coming from and how much they cost

Among adults or those with family who have gotten an unexpected medical bill in the past two years — which likely includes a combination of the surprise bills covered by the legislation as well as other costs that patients simply weren’t aware of — about 3 in 5 said their unexpected medical bills came with a price tag between $100 and $1,000. Another 15 percent got unexpected bills under $100, while 18 percent were charged over $1,000, the poll found.

The most frequently cited unexpected charges were for in-network lab work that was sent to an out-of-network lab for assessment, which is covered under the law, as well as testing or procedures not covered by insurance, which isn’t. Another 16 percent of adults who said they’d gotten an unexpected bill in the past two years said they were charged for transportation to an emergency room by an out-of-network ambulance. Notably, ground ambulances are exempted from the surprise billing ban.

The share of adults who said they were “very” or “somewhat” concerned about receiving a surprise bill, and the share who said they had ever hesitated or skipped medical care over surprise billing concerns, from the following provider types:

“It’s pretty common that ground ambulances are out-of-network very often, and it is at least a significant source of surprise bills to patients,” said Loren Adler, associate director of the USC-Brookings Schaeffer Initiative for Health Policy. “I think Congress is going to have to come back to this at some point.”

One area of billing complications earlier in the pandemic doesn’t appear to have lingered: COVID-19 testing. In the survey, 6 percent of adults who had been tested — or have a family member that was — said they’d received an unexpected bill for their COVID-19 test, while another 11 percent said the same about treatment.

Adults who had gotten COVID-19 testing or treatment, or have a family member that did, were asked whether they’d received a bill

The legal saga isn’t over for the current surprise billing protections. The American Hospital Association and the American Medical Association filed a lawsuit last month challenging the Biden administration’s implementation of the law, which they said unfairly favors health insurers over providers.

Adler also warned that some patients will likely continue to receive surprise bills in the coming months because not all physicians will be up to date on the policy change.

“I suspect there will be some surprise bills — not out of malice, it just happens,” Adler said. “That’s where patient know-how here is important.”

The Centers for Medicare and Medicaid Services is taking steps to publicize the new rule, including the launch of a consumer complaint webpage. An agency spokesperson noted that some providers are required to give patients a one-pager with information on the law, and said officials ran training sessions for consumer advocates, unions, legal aid organizations and others.

“We know that many consumers will contact local organizations they already know and trust to get information about their medical bills, so we are making sure our partners are armed with the right information to share with consumers,” the spokesperson said.

Those efforts may be necessary, given just 19 percent of adults said they’d seen, read or heard either “a lot” or “some” about the new law. Even so, 64 percent said they are confident that they would know how to address an unexpected medical bill that they believe to be illegal.

“It’s one of these laws where it’s hard for patients to know that it exists, to some degree,” Adler said, because if someone doesn’t receive a surprise bill that they may have gotten before the rule went into effect, “you don’t know that you got protected by the law.”

The bottom line, Volk said: “If you get a bill you are not expecting, you should ask questions.”