Inside the Next Frontier in Sports Betting: Integrated Viewing 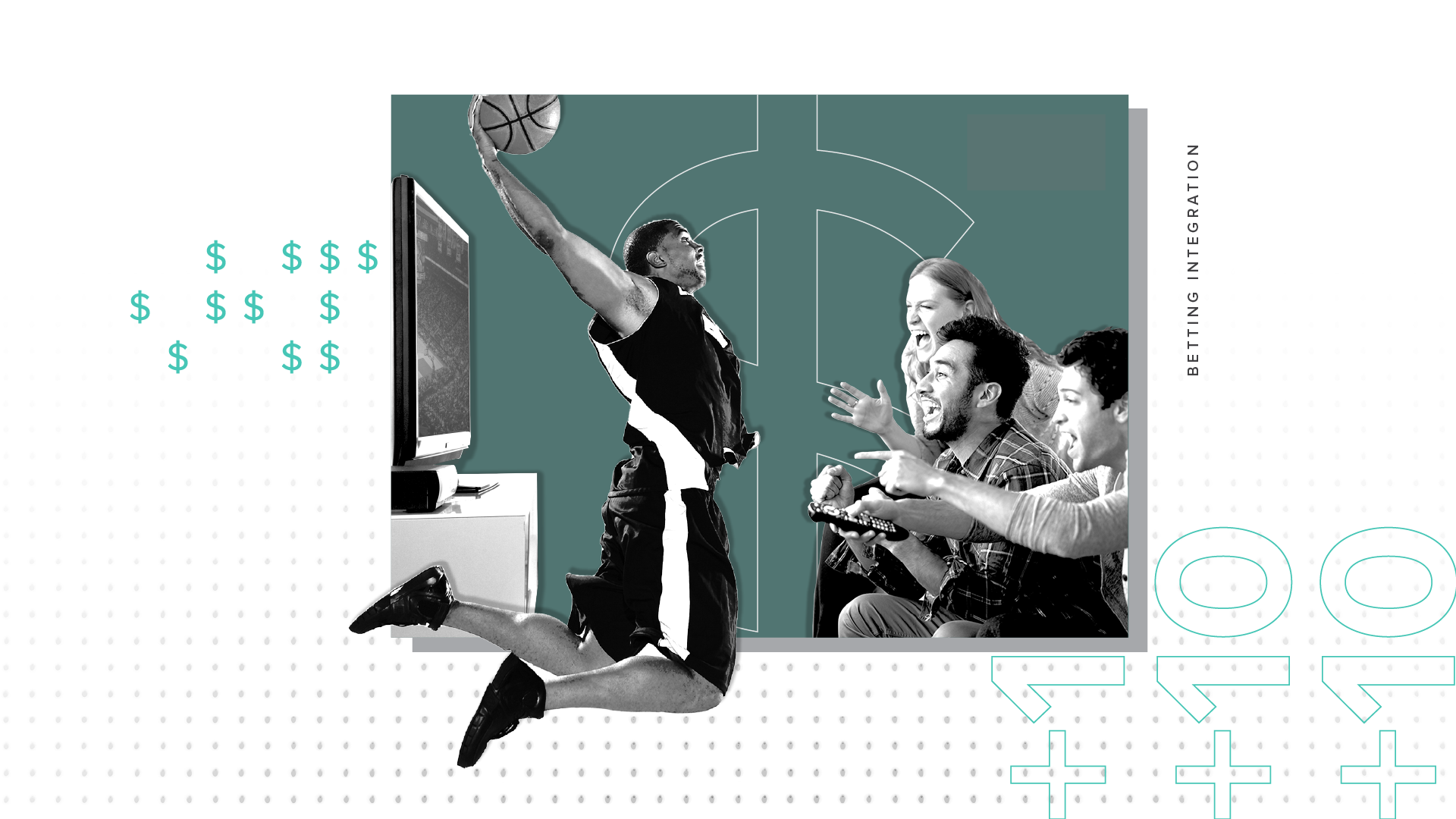 Forty-eight percent of regular sports bettors say they’d be “very interested” in participating in live betting on the same screen as live video of the event they are betting on, according to Morning Consult data. (Getty Images / Morning Consult artwork by Anna Davis)
By Alex Silverman

There’s never been a better time to be a sports bettor.

As of this month, fans in 18 states (a number poised to increase this year) and the District of Columbia can legally wager on anything from the NFL to Russian table tennis from the comfort of their couches via their mobile phones. Meanwhile, TV networks are incorporating odds and point spreads into their productions of live games and producing ancillary programming geared toward bettors, much of it as part of commercial partnerships with gaming operators.

Still, many in the industry believe the betting experience is still in the early stages of its evolution. The “billion-dollar question,” William Mao, vice president of media rights consulting at Octagon, says, is if further integration of live betting functionality into sports broadcasts and streams, can not only increase live wagering, but also viewership, as some industry insiders believe.

Like many in the betting world, IMG Arena Senior Vice President of Commercial Max Wright envisions a future in which live wagering evolves from a “second-screen” experience to a single-screen experience for bettors.

“The end evolution would be having a digital live stream that has odds markets embedded graphically in some way over the broadcast, giving the consumer the ability to use their finger to click and to place a bet right there in the broadcast stream itself,” Wright said, adding the technology is likely a few years away, and could raise ethical and regulatory questions.

In a recent Morning Consult survey, 56 percent of regular sports bettors — defined as those who bet at least once a month — said they bet online or via their mobile phones. Nearly half of regular sports bettors (48 percent) said they would be “very interested” in participating in live betting on the same screen as live video of the event they are betting on, with another 34 percent saying they would be “somewhat interested.” Enthusiasm was particularly high among millennial and Gen Z sports bettors, as well as those who said they bet on esports, soccer, combat sports and tennis.

U.S. adults who said they sometimes bet on sports were asked whether they would be interested in participating in live/in-game betting if they could place wagers on the same screen as the live event broadcast

Poll conducted Dec. 11-15, 2021, among a representative sample of 973 sports bettors, with an unweighted margin of error of +/-3 percentage points.

The majority of bettors, especially younger generations and more active ones, also cited ease of use as an important factor in choosing a sports betting service, suggesting operators that intuitively incorporate wagering into the viewing experience could benefit in customer acquisition and retention.

IMG Arena, a subsidiary of Endeavor Group Holdings Inc. that works with sports properties on data distribution and monetization, is helping sportsbooks move toward this future on a number of fronts, including licensing live streaming rights to sportsbooks to show alongside in-game betting offerings. In 2020, the company partnered with FanDuel, a division of Flutter Entertainment PLC, to allow the operator to stream select NHL games on its web platform and mobile app alongside in-game betting opportunities.

Mike Raffensperger, FanDuel’s chief marketing officer, noted the operator also streams sports like table tennis and European soccer, which might not be available for U.S. bettors to watch on TV.

FanDuel’s top competitor, DraftKings Inc., also sought to innovate in this space by partnering with Dish Network Corp. to allow the pay-TV provider’s subscribers to initiate wagers on-screen via their remote controls. Doing so would trigger a text message that directs the user to the DraftKings mobile app to finish placing the bet.

IMG Arena’s most futuristic offering is its Golf Event Centre, a white-label experience deployed by sportsbooks that for the first time allows bettors to place live bets on every player, hole and individual shot of a golf tournament. It secured data distribution and streaming rights for the LPGA Tour earlier this month, adding to a portfolio that includes the PGA Tour, DP World Tour, PGA Championship and Ryder Cup.

The Event Centre interface, which fans access through their sportsbook of choice, features an interactive leaderboard for each event and graphic visualizations showing every player’s precise position on the course, alongside a range of available live bets with odds developed by an algorithm in real time. Users also have access to live streaming video of two par-3 holes per tournament, on which they can access unique bet types, such as which member of a given group will land their approach shot closest to the pin.

Developing a comprehensive live golf betting experience is a massive undertaking that involves using drones to create detailed renderings of each hole and, for DP World Tour events, sending up to 70 full-time employees to each event to record real-time ball location information. For PGA Tour events, the Event Centre relies on the tour’s ShotLink tracking system for real-time location information. The interface offers bettors infinitely more real-time information than does a traditional golf telecast, which is essentially a stream of select live and recently recorded action from around the course.

Wright is bullish on golf’s potential as a live betting sport given that the action takes place all day for four straight days each week. While he said live betting accounts for 70 to 80 percent of action on European soccer, the status quo in golf prior to IMG Arena’s involvement was about 5 percent, with the bulk of bets placed prior to each event.

FuboTV, the sports-focused live TV streaming service, also seeks to marry live sports viewing and betting into a single experience. While many media companies have sought to benefit from the legalization of betting through advertising-based relationships, FuboTV has built its own betting operation by acquiring pre-market sportsbook operator Vigtory, obtaining market access agreements in five states and taking bets for the first time late last year in Iowa (and now in Arizona).

Fubo Sportsbook’s signature feature at launch, called Watching Now, syncs the company’s mobile betting app with its streaming service so that the betting markets presented on a user’s phone correspond with whichever event they are watching on their connected TV or other device. If the user changes the channel from a soccer match to a baseball game, the odds markets shown on their phone will automatically switch as well.

David Gandler, the company’s co-founder and CEO, said Watching Now only scratches the surface of how betting integration can enhance the fan experience. He suggested that with machine learning, fuboTV could eventually be able to graphically spotlight players on a user’s fantasy team within a live broadcast and create an NFL RedZone-like feed that switches between games on which a viewer is wagering. He also envisions fuboTV users placing peer-to-peer bets against each other, with leaderboards and prizes to the most successful bettors.

Efforts to bring viewing and betting together in a single interface going forward could be tricky and would still have to answer concerns about preventing underage sports fans from being further enticed to gamble.

“There’s questions about whether that is an appropriate experience to deliver amongst a normal broadcast,” Wright said. “Because you have under-21s watching, is that the right thing to do?”

These initiatives will require cooperation between sports properties, their media rights partners and sportsbooks. Raffensperger said he expects to see more of this as the U.S. betting industry continues to mature.

“The overlap between sports media companies and sports betting companies is a really interesting and emerging part of the evolution of this industry stateside,” he said. “I do think you’ll see increasing partnership and collaboration between the rights holders, the leagues and the operators.”