For U.S. Sports Bettors, It’s FanDuel and DraftKings — and Then Everyone Else

After getting head starts through fantasy sports, the industry giants hold large leads in awareness and usage, according to new polling 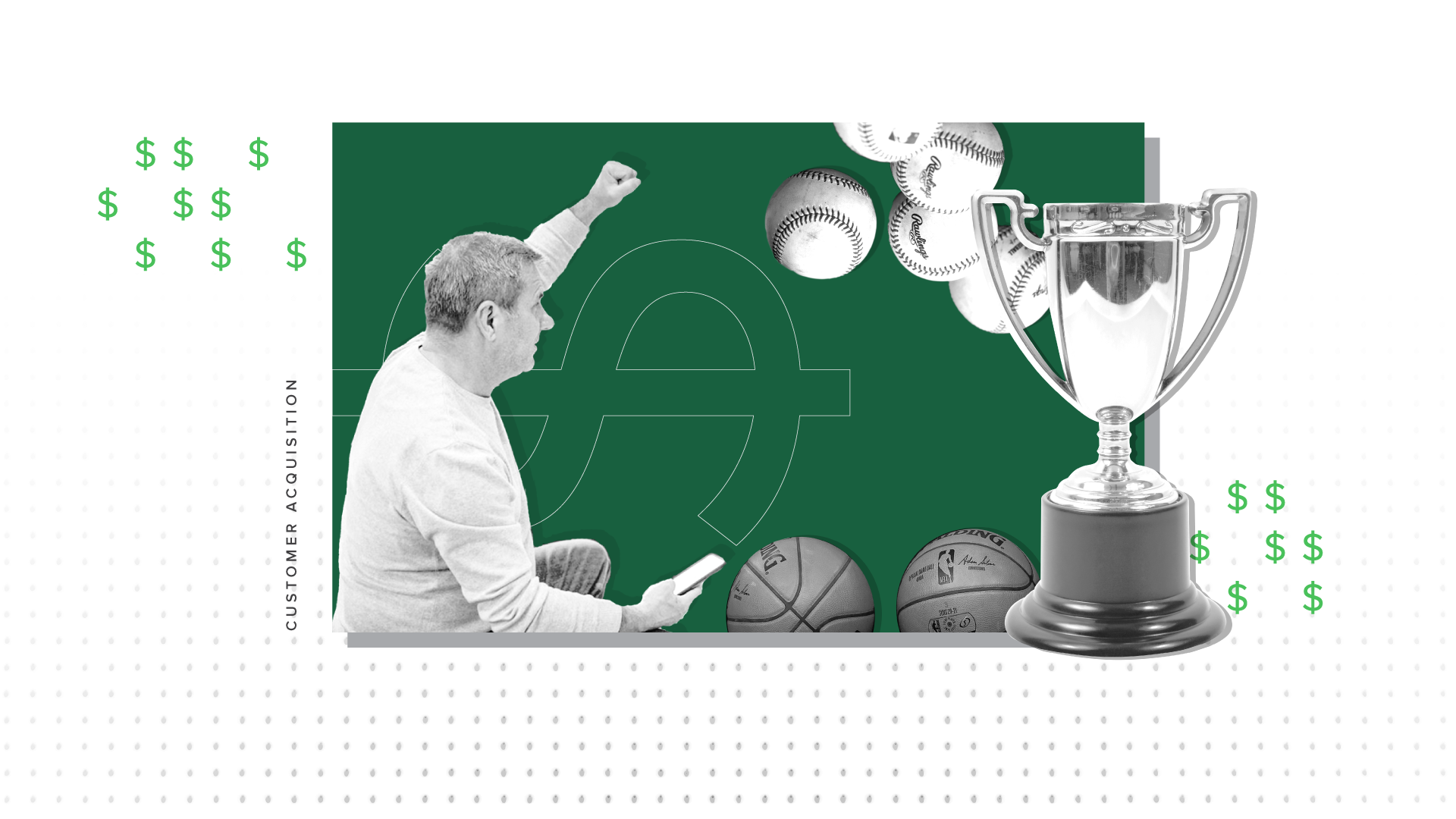 More than half of regular U.S. sports bettors (those placing bets at least monthly) said they use DraftKings or FanDuel “often” or “sometimes” to place wagers, according to Morning Consult data. (Getty Images / Morning Consult artwork by Monique Zarbaf)
By Alex Silverman

While industry experts stress that it’s still early days in the U.S. sports betting space, there’s no denying FanDuel and DraftKings Inc. are leaps and bounds ahead of the competition.

In a new survey from Morning Consult, the two powerhouses scored the highest rates of familiarity and usage among regular sports bettors, confirming their status as the industry’s top players.

Among U.S. adults ages 21 and up who bet on sports at least once a month, 78 percent said they are either “very” or “somewhat” familiar with DraftKings, while 73 percent said they are familiar with FanDuel. Caesars Sportsbook was the only competitor within 10 percentage points of the top two in familiarity (65 percent), while Fox Bet and BetMGM rounded out the top five at 56 percent each.

DraftKings and FanDuel were also the only sportsbooks that more than half of regular sports bettors (those placing bets at least monthly) said they use “often” or “sometimes” at 61 percent and 56 percent, respectively. Forty-one percent of regular bettors said they use BetMGM and Caesars.

Regular Sports Bettors Are Most Familiar With, Likely to Bet With DraftKings, FanDuel

U.S. adults who said they bet on sports at least monthly were asked whether they were familiar with and use each of the following sportsbooks:

Poll conducted Dec. 11-15, 2021, among a representative sample of 684 regular sports bettors, with an unweighted margin of error of +/-4 percentage points.

Many have compared the legalization of sports betting in the United States to the California Gold Rush of the mid-19th century, and with good reason. VIXIO GamblingCompliance, a gaming industry consultancy, estimated that annual U.S. sports betting revenue would reach $12.1 billion to $17.7 billion by 2025, up from an expected $6.7 billion to $8 billion in 2022. Meanwhile, DraftKings has said the industry could generate between $22 billion and $24 billion a year when it reaches maturity.

With growth prospects so lofty, competition to claim a piece of the pie is extremely fierce as players in the space spend more on marketing than they are bringing in from current operations.

“They are all realistic, or at least have been very transparent, that in the beginning of states opening up, that they’re going to be spending a lot of money,” said Sara Slane, an independent gaming industry consultant. “Acquisition costs are very high when you actually look at the lifetime value of a customer at this point in time.”

FanDuel, DraftKings spending big to build on their head start

“DraftKings and FanDuel started off with a bigger lead than some of the more established casino brands,” Slane said. “They had obviously been front and center with daily fantasy sports and have spent billions of dollars on building up brand recognition and capturing those DFS customers and then converting them to sports bettors.”

As more states have launched legal wagering, the two dominant players have continued to spend massive sums to acquire even more new customers. In the first nine months of 2021, DraftKings spent more than $703 million on marketing and sales, up 132 percent from the same stretch in 2020. Flutter Entertainment, the U.K.-based conglomerate that owns FanDuel, spent 292 million pounds ($398 million) on U.S. sales and marketing in just the first six months of 2021, a year-over-year increase of 230 percent.

“There’s not really a sports betting state in the country where we do not have at least one major professional sports partnership,” said Mike Raffensperger, FanDuel’s chief marketing officer.

FanDuel also made headlines recently with its eye-popping $30 million-a-year sponsorship of “The Pat McAfee Show,” the popular program hosted by the former NFL punter, which airs on Sirius XM and YouTube.

“We are hugely integrated into his daily program on YouTube and podcasting and radio, and frankly, he’s really integrated into our business, helping us think through how we create new, really fun incentive promotions or betting events,” Raffensperger said. “It’s a really symbiotic relationship.”

It might seem like FanDuel is on a limitless spending spree, but Raffensperger said “of course, there’s a cap” to the budget, though he declined to share specific figures.

“We have really ambitious targets for our business across the long term,” he said. “We are really mindful of the unit economics of our business. Fundamentally, that’s what it comes down to: What is our cost of acquisition and during what period is it paying back?”

How the big two’s competitors are acquiring customers

Other players seeking to stake their claim in the competitive sports betting marketplace are taking a wide range of approaches that Slane said tend to fall into two buckets.

“The question always becomes whether you build or buy your brand,” she said.

As an example of the latter, Slane pointed to Penn National Gaming, which bought into digital media company Barstool Sports in early 2020 at a $450 million valuation. Penn National launched its online and mobile sportsbook with Barstool branding and has leveraged the company’s personalities and betting-themed content to quickly gain a foothold with its legions of devout fans.

In October, Penn purchased Canadian media company theScore, looking to leverage its established audience as the foundation for an imminent launch in the Ontario betting market.

On the other end of the spectrum is PointsBet USA, the U.S. footprint of Australia-based betting operator PointsBet Holdings Ltd., which launched in 2019. During its 2021 fiscal year, which ran through the end of June, PointsBet spent $119.2 million on U.S. marketing while generating $42.3 million from its U.S. operations. The company’s most prominent play came in 2020, when it inked a five-year, $393 million deal with Comcast Corp.’s NBCUniversal Media to make it the official betting partner of NBC Sports.

Kyle Christensen, PointsBet USA’s chief marketing officer, wrote in an email to Morning Consult that the company’s philosophy is “not to spend irrationally but be aggressive and disciplined.”

Bettors Value Ease of Use, Rewards When Choosing an Online Sportsbook

U.S. adults who said they bet on sports at least monthly were asked how important each of the following factors are when deciding on a service to use for sports betting:

Poll conducted Dec. 11-15, 2021, among a representative sample of 684 regular sports bettors, with an unweighted margin of error of +/-4 percentage points.

In the Morning Consult survey, regular sports bettors prioritized promotions and product as the most important factors when choosing a sports betting service. More than 4 in 5 respondents said “bonuses and rewards” (82 percent) and “simplicity/ease of use” (81 percent) are important. Fewer bettors said they value an affiliation with a favorite sports property (67 percent) or a particular media outlet (53 percent), though these partnerships can still be effective in raising brand awareness.

“Initially, it’s the free money,” Slane said. “That’s clearly appealing and enticing for customers to sign up with an app.”

Raffensperger also stressed the importance of establishing FanDuel’s reputation as “a generous, bettor-friendly sportsbook” through promotional bonuses, but also through its handling of some of the sticky situations that arise in sports betting.

“Whether that’s a judgment call on which way a house rule should go, or we do a ‘bad beat’ refund when a ref blows a call that turns a game over, we do things like that all the time,” he said. “I think our customers just appreciate the straightforwardness and generosity.”

Most industry observers believe consolidation among sportsbooks is inevitable as the U.S. betting industry matures, which could ultimately lead to a cooling of unsustainable spending on marketing.

“Gaming is a very low-margin business,” Raffensperger said. “It’s not an industry that will support 15, 20, 25 different operators in a state.”

As long as new states are launching betting, however, companies big and small will continue to shoot their shots, with the hope that they can gain a meaningful share of a rapidly growing industry.

“Every single year we’re opening up new states, so the spending is obviously going to continue to happen,” Slane said. “I don’t see it stopping in the near future.”