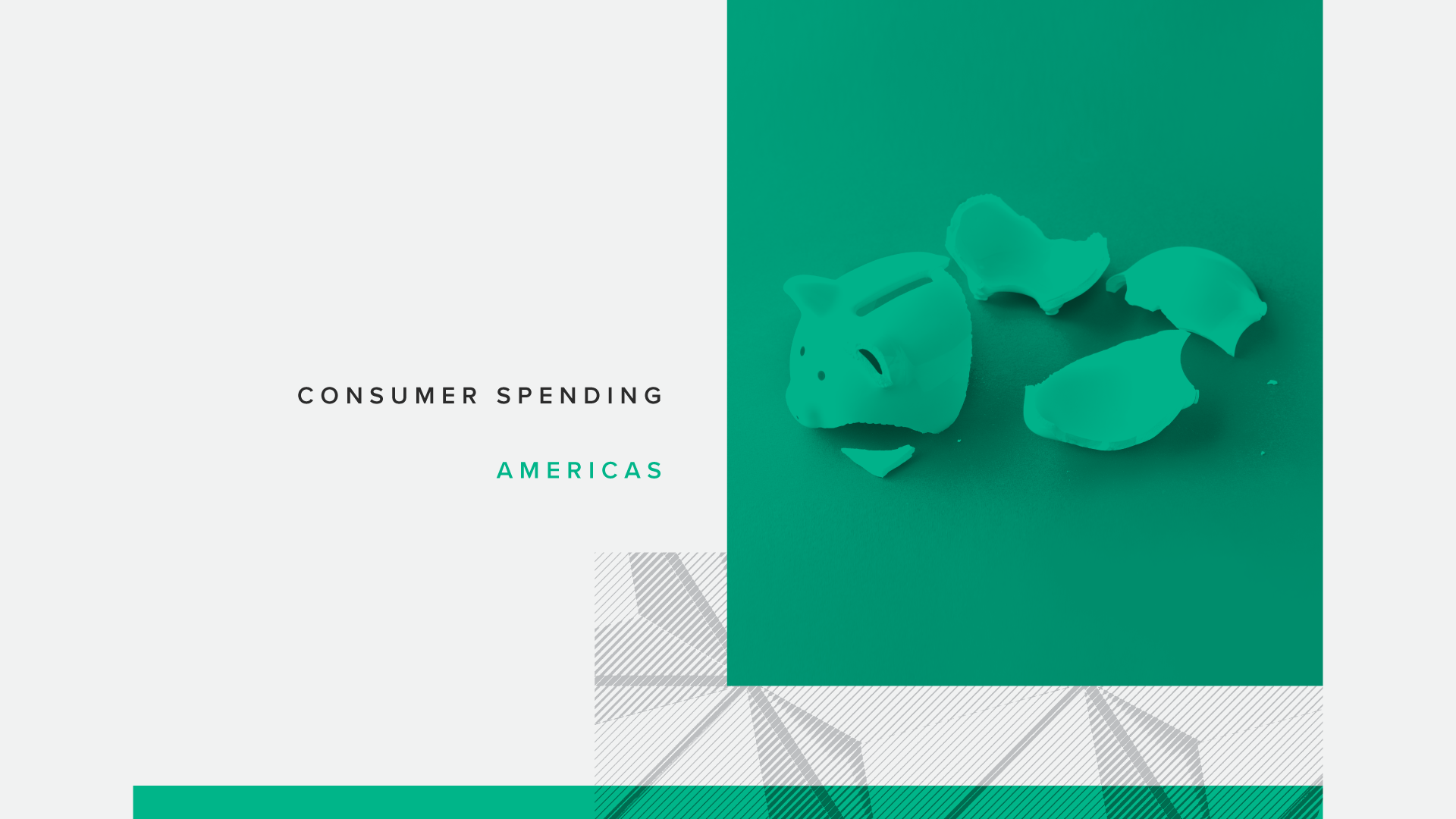 The U.S. Census Bureau announced lackluster retail sales growth in December: Advance monthly sales increased without seasonal adjustments but declined 1.9 percent when seasonality was factored in. Morning Consult’s U.S. Consumer Spending Report — which draws on surveys of consumers rather than businesses and covers a broader view of spending than the retail report, including services like housing and health care — showed a moderate increase in spending. However, gains were concentrated in essential household expenses and did not show robust outlays for discretionary goods and services, as might be expected over the holiday season. 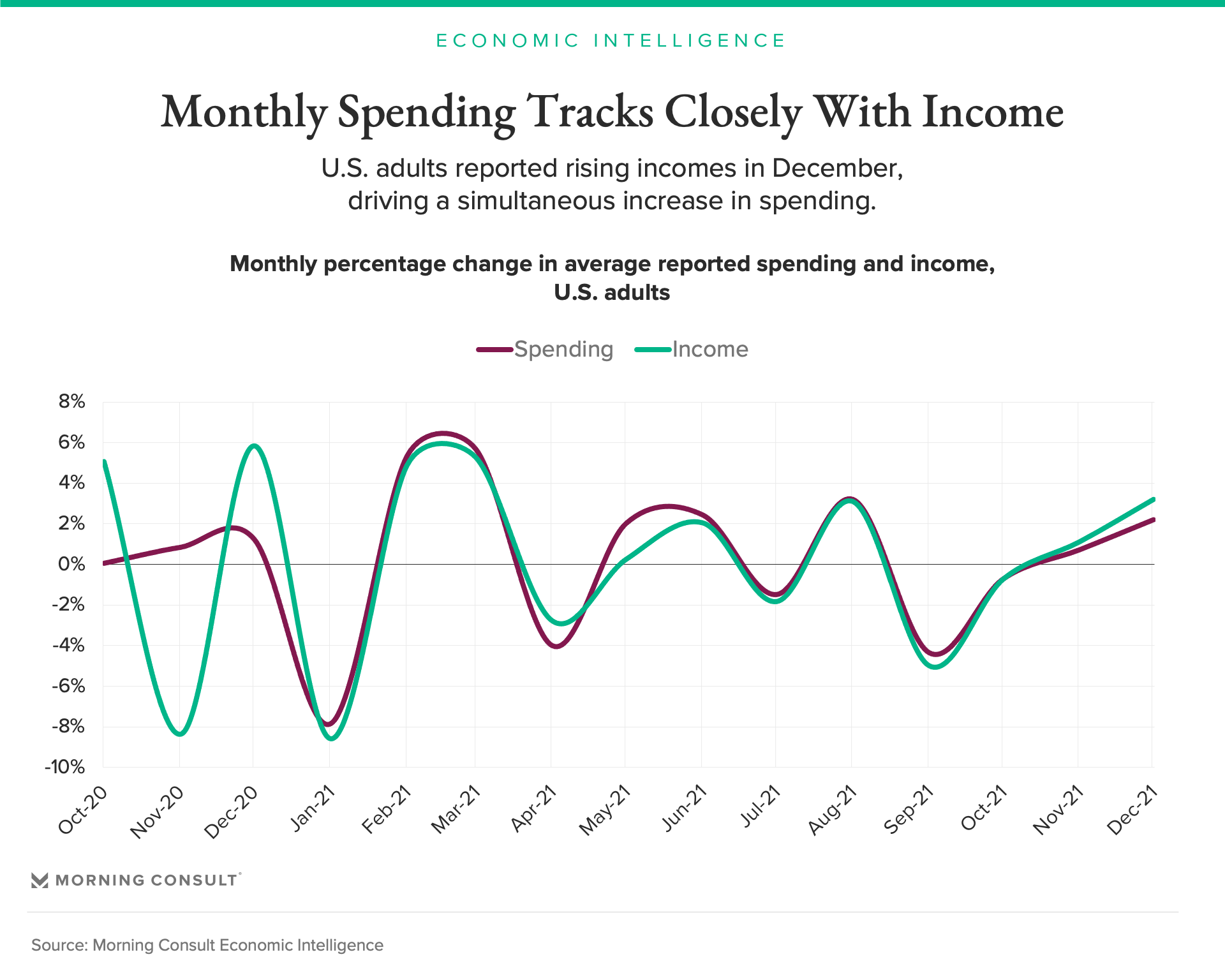 U.S. adults reported a 2.2 percent increase in monthly income in December as employment and wage gains mostly withstood the impact of omicron. As a result, households were in a better position to afford increasingly costly essentials like housing and groceries. Consumers — especially those earning relatively less money — have reported a high correlation between income and spending (.71). Sustained income growth from wages will therefore be a critical driver of spending demand as government stimulus measures play a significantly reduced role in supporting household finances this year compared with 2021. 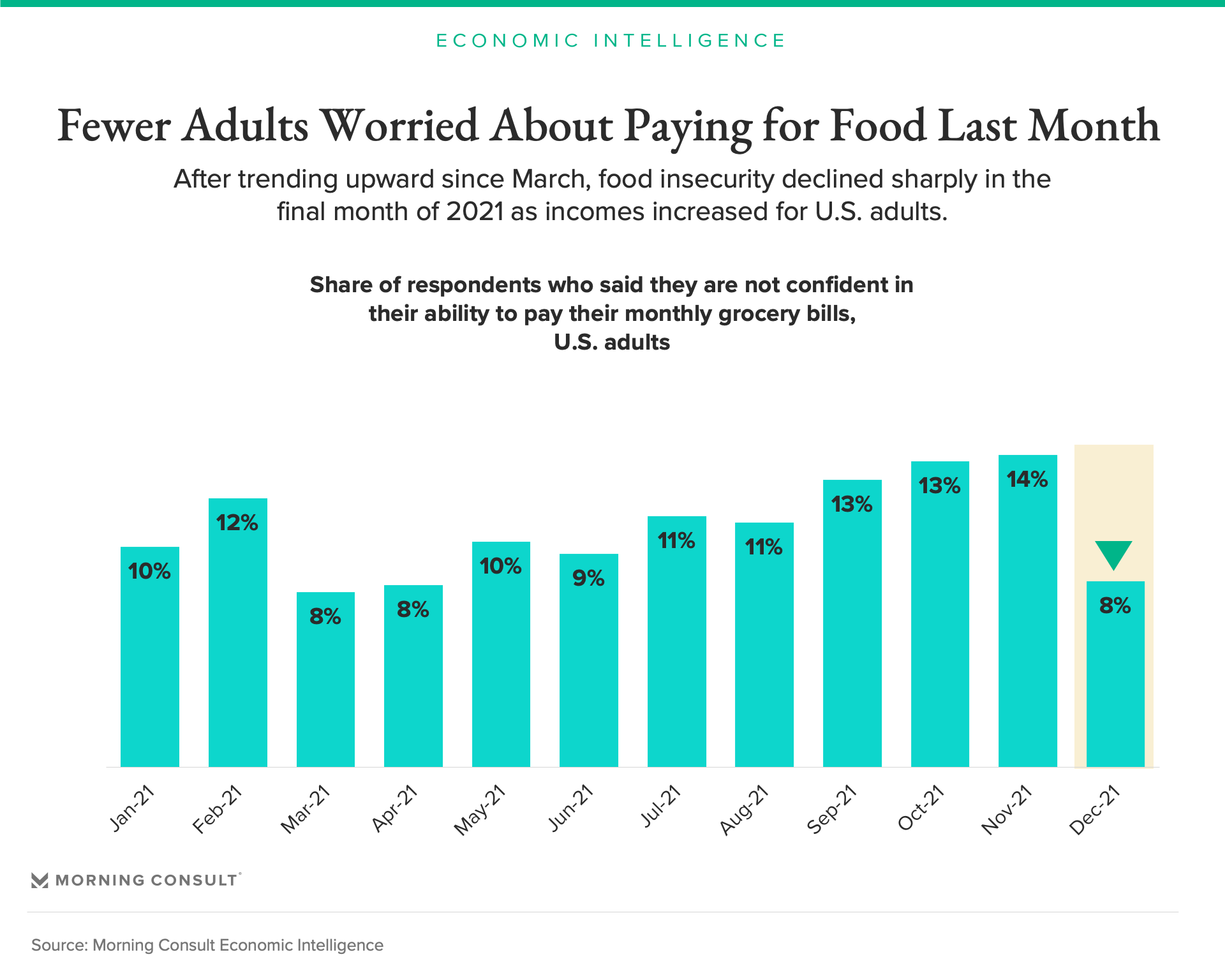 Most of the December gains in spending were driven by categories serving critical household needs, including shelter, food and transportation. These same categories have grown increasingly expensive, and affordability challenges appeared to limit spending on high-inflation staple categories in the months prior.

In December, however, rising incomes enabled U.S. adults to feel more financially secure: The share who said they lacked confidence in their ability to make grocery payments fell to its lowest level since April (8.2 percent), and missed housing payments declined month over month. The income cushion offered a boost to parents, who reported a sharp increase in grocery purchases in December compared with the previous three months as school closures kept children home, requiring additional meals. Many of this same group also received their final advance child tax credit payment in December as Congress failed to extend the expanded program through 2022. 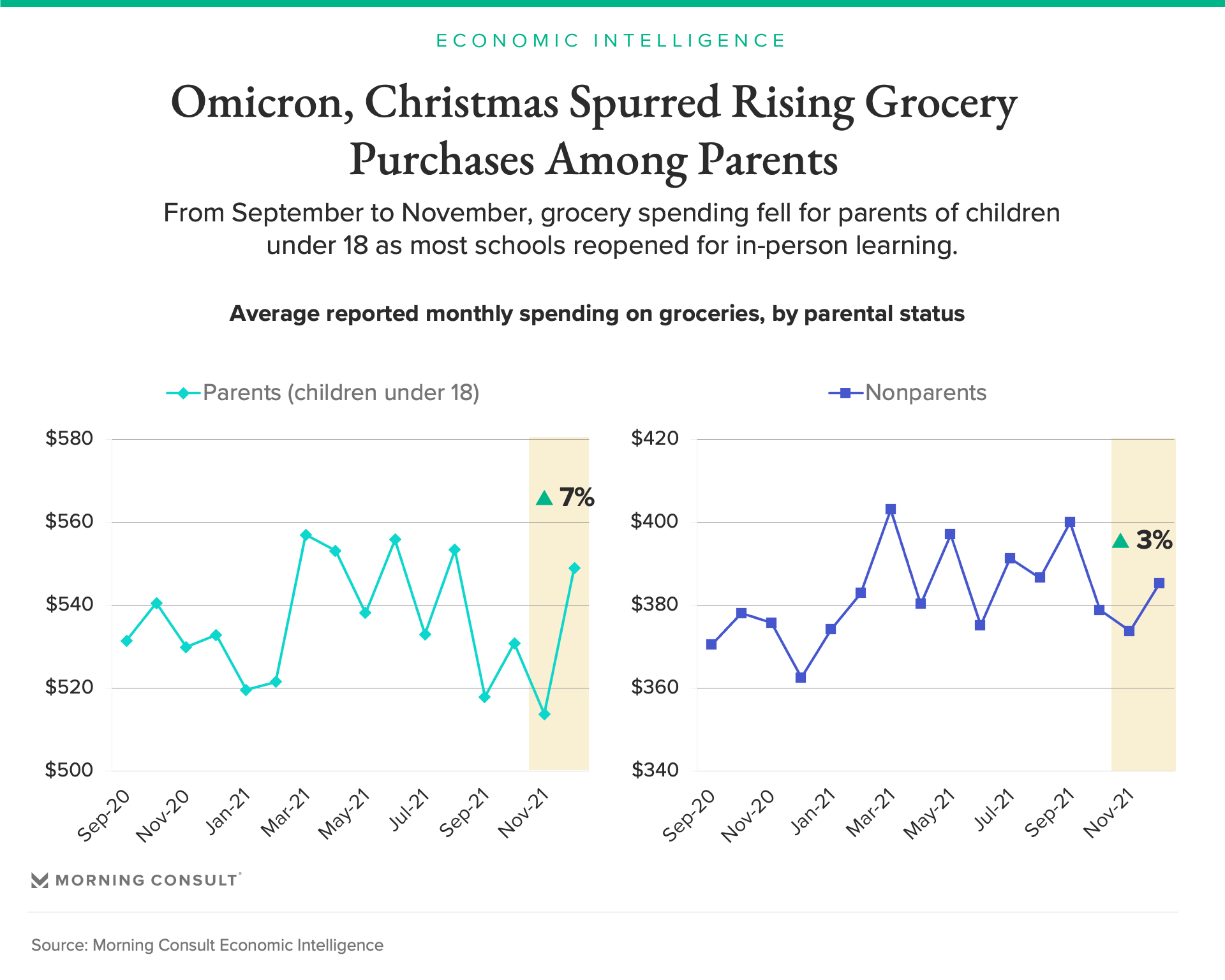 Pandemic-related factors continue to exert some influence over spending — though as widespread vaccination helps stabilize consumer sentiment, the impact is most apparent on spending allocation across categories rather than on spending overall. In particular, spending on services categories including travel, health and personal care declined as omicron cases spiked in December and consumers’ comfort levels with engaging in activities like vacations slipped. 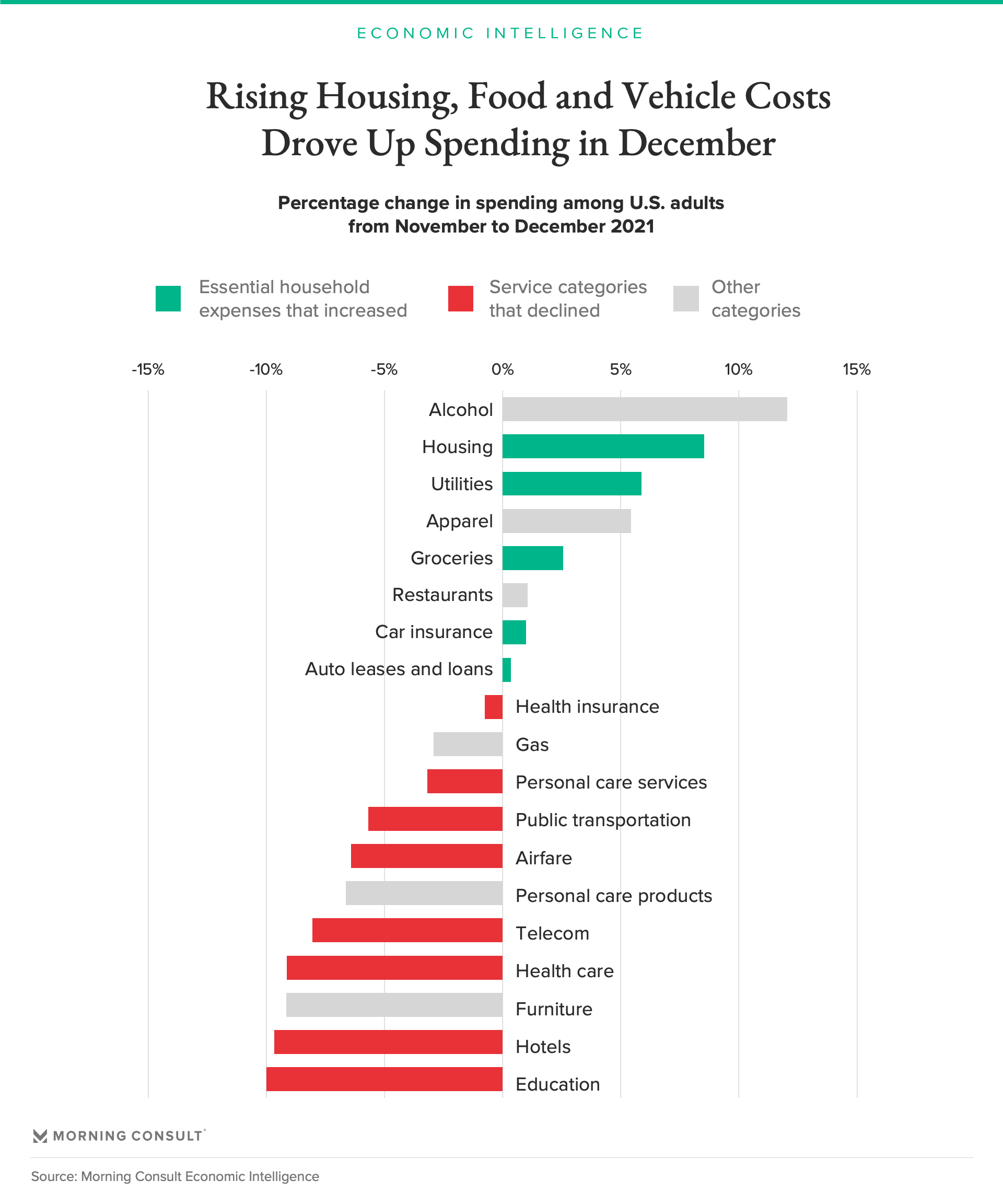 Knock-on effects of the pandemic also continue to shape spending patterns. Education-related expenses fell in December to their lowest point since the series began tracking in September 2020. Muted education spending — which has freed up space in monthly budgets for other expenditures — has been partly enabled by the federal student loan pause that was recently extended until May.

Rising incomes supported spending through the end of the year, but consumer demand will be tested by mounting headwinds. While vaccines have mitigated the negative impact of case surges on consumption, outbreaks continue to influence supply-side dynamics and demand for certain services. Shortages of goods and workers are stoking price increases across multiple categories, bringing inflation concerns to the forefront of consumers’ minds. So far, the improving employment situation, excess savings and government transfers have supported demand growth despite accelerating inflation. However, continuing rapid price growth for household staples like gas, food and housing may further dampen discretionary spending.