Ron Johnson Is Unpopular in Wisconsin. Can He Win Anyway? 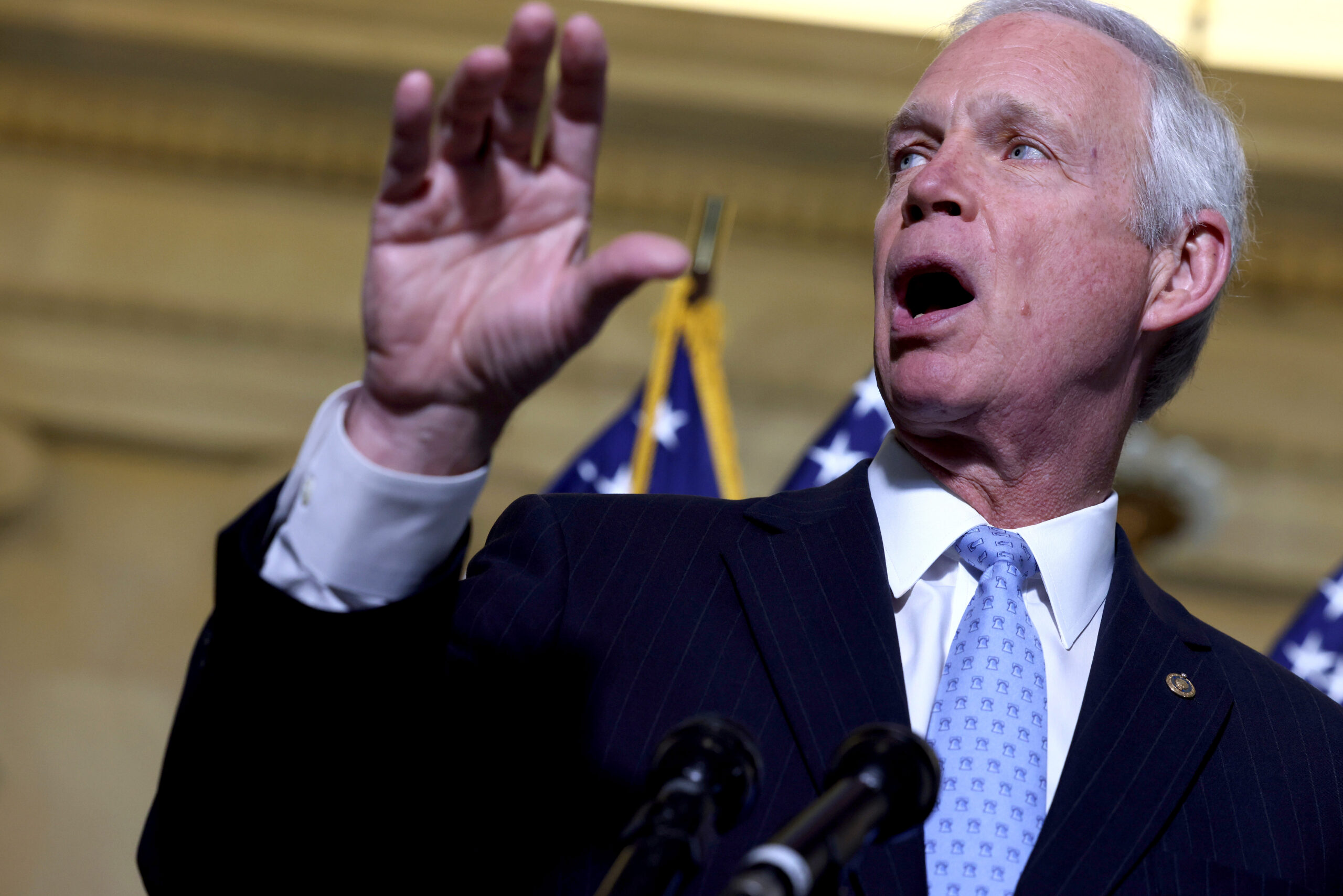 Sen. Ron Johnson speaks about the origins of COVID-19 at a press conference in Washington, D.C., in June 2021. (Anna Moneymaker/Getty Images)
By Eli Yokley

Republican Sen. Ron Johnson emerged from Donald Trump’s presidency with his approval ratings in Wisconsin underwater — and it’s only gotten worse under Joe Biden, even as voters there have soured on the Democratic president.

But while Johnson is unpopular, few are ready to declare his chances dead on arrival as he revs up his third Senate campaign in a state Trump lost by just a sliver in 2020.

“Wisconsin is over and over the ‘one percentage point or less’ state – the land of the nail-biter,” said Ben Wikler, chair of the Democratic Party of Wisconsin.

What the polling says about Ron Johnson

Heading into this year’s campaign, though, Morning Consult’s quarterly tracking shows Johnson’s approval rating severely underwater. According to the latest figures, taken from surveys conducted among 10,496 registered Wisconsin voters between Oct. 1 and Dec. 31, 36 percent of Badger State voters approved of his job performance, 51 percent disapproved and 13 percent had no opinion.

Wisconsin voters were asked whether they approved or disapproved of Republican Sen. Ron Johnson’s job performance

Quarterly polls conducted from 2017-2021 among representative samples of at least 2,517 registered Wisconsin voters, with unweighted margins of error of up to +/-3 percentage points for responses shown.

The decline in sentiment largely started after the onset of the COVID-19 pandemic in March 2020 but gained momentum after Biden was elected, when Johnson made headlines for his statements about the Jan. 6 Capitol attack and skepticism of vaccines.

“At this point, very few people don’t have an impression of him,” Wikler said. “He simply can’t introduce himself for the first time to an electorate that sees him spin further and further into the most toxic reaches.”

The souring has been steepest among independent voters in Wisconsin. Among independents, 56 percent disapprove of Johnson’s job performance — up 14 points since the third quarter of 2020, before the presidential election — while the share with no opinion fell from 28 to 16 percent during the same period. All in all, 39 percent of independent voters now strongly disapprove of Johnson, nearly five times as many as those who strongly approve.

Johnson has also felt losses among voters from his own party. While the majority of Wisconsin Republican voters (62 percent) approve of his job performance, that figure is down from 70 percent before the pandemic and from 78 percent in the first three months of 2017, just after his re-election. Meanwhile, only about 1 in 4 Wisconsin Republicans (27 percent) strongly approve of Johnson’s job performance, which is down 9 points since the first three months of his term.

Previous Morning Consult polling has shown Johnson near the bottom of the pack in terms of base support among Republican senators running for re-election this year. Around a quarter of Wisconsin Republicans (24 percent) disapprove of his job performance.

Asked what Johnson is doing to improve his standing, spokeswoman Alexa Henning said his supporters discount mainstream media outlets and “see through the lies and distortions of their false attacks.” She said the senator had “received strong encouragement” to forgo his two-term pledge and run for re-election from “Wisconsinites who share his grave concerns over the direction Democrats are taking our country.”

What Ron Johnson needs to win

Wisconsin’s senior senator should get a boost from traditional midterm dynamics, where the party out of power is helped by animosity toward the party in the White House.

Wisconsin paints a clear example of the collapse in Biden’s popularity. In a state where the Democratic president eked out one of his narrowest margins of victory over Trump (just under 21,000 votes), Biden has seen his standing plummet — especially in the suburban communities that Democrats relied on for 2018 midterm victories and Biden’s own success.

Several conservatives involved in the state argued that Johnson casting himself as foe of Biden and the national Democratic brand could help shore up his intraparty standing. But that isn’t likely to be enough in a state that produces such narrow margins of victory.

“Any off-year election is going to be a referendum on Joe Biden, which is why it’s going to be a really difficult year for Democrats in places like Wisconsin,” said former Wisconsin radio host Charlie Sykes, an early proponent of Johnson during his 2010 bid who’s turned critical of the senator and the Trump-inspired GOP. “The question is: What will those suburban swing voters think? Will they go back to the Republican Party because of Biden, or go to the polls and think, ‘Yeah, I don’t like Biden, but Ron Johnson’s too crazy for Wisconsin’?”

Related: Biden’s Approval Rating Sinks to New Low as He Nears One Year in Office

Andrew Hitt, former chairman of the Republican Party of Wisconsin, called Johnson a “master at retail politics” whose “plain-spoken, calling it as he sees it” approach appeals to Wisconsinites when leveraged appropriately. He said the early data has no way of accounting for “the X factor of Ron Johnson when he’s campaigning.”

“The question is whether or not he’ll focus on the winning message, whether or not people will respond, or whether those negative numbers are so baked in,” he said.

Republicans in Wisconsin said Johnson would do well to craft a message meant to appeal to voters in the middle, nodding to the approach of Virginia Gov. Glenn Youngkin, a Republican who highlighted economic and educational issues to defeat his Democratic rival last year.

“I think Johnson is in a strong position from the standpoint of being the incumbent and not having a primary,” Hitt said. “But he’s got to execute on a winning message, and if we look at the numbers and the data, we know he hasn’t been executing on a winning message.”

Hitt said Johnson’s message in a Wall Street Journal op-ed he wrote announcing his re-election campaign was a good start in appealing to both the GOP base and the “6 to 7 percent” who stand in the middle of the Wisconsin electorate as true swing voters. Besides touting Republican wins on regulatory relief, strengthening the military and tax cuts, Johnson used his rollout to hit the Biden administration’s “failed response” to the COVID-19 pandemic, crime rates and the rising cost of living — all issues that give Democrats heartburn.

Joe Zepecki, a Milwaukee-based Democratic communications strategist, said other issues like Russia’s aggression in Ukraine, the Supreme Court’s handling of Roe v. Wade and the uncertain trajectory of the pandemic could also change the climate come November.

“Today, the Democrat wins,” he said. “The questions are: What happens to the political environment — is it good enough that it can lift him over the top? And how effective is what they plan to do to whoever the eventual nominee is?”

What Democrats need to win

Democrats are banking on Johnson’s unpopularity to give them an edge in one of the only contests this year where they stand a chance of knocking off a Republican incumbent as they defend a narrow Senate majority.

“While other states may have difficulty motivating Democrats to turn out, the vitriol that Johnson inspires in Democrats in Wisconsin will help to drive turnout,” said Wisconsin Democratic strategist Tanya Bjork. She pointed to tax breaks he supported that benefited big donors to his campaigns and his comments about vaccines and the 2020 election as chief examples.

Wisconsin voters were asked whether they approved or disapproved of Republican Sen. Ron Johnson’s job performance

Quarterly poll conducted Oct. 1-Dec. 31, 2021, among a representative sample of 10,496 registered Wisconsin voters, with an unweighted margin of error of +/-1 percentage points. Figures may not add up to 100% due to rounding.

Indeed, Democrats are more than twice as likely to strongly disapprove of Johnson’s job performance than Republicans are to solidly back it, at 63 percent to 27 percent.

With Biden similarly struggling with independents, Sykes said the stakes have been raised for Democrats to nominate a candidate in their August primary who is “acceptable” to voters “embarrassed by Johnson.”

Many conservatives see Barnes, an outspoken progressive who’s called House progressive “Squad” member IIhan Omar of Minnesota “brilliant,” as the perfect foil for Johnson to caricature as extreme. Henning, the Johnson spokeswoman, said whoever the Democratic nominee is “will have to run on Joe Biden’s abysmal record” and that voters should be wary of anyone who supports his agenda, “or worse, something even more progressive.”

Bjork, who’s previously worked for Emily’s List and President Barack Obama’s Wisconsin campaigns, noted that running as a progressive in the state isn’t impossible, pointing to the winning path charted by Sen. Tammy Baldwin (D-Wis.) a decade ago.

“Republicans will probably say that they want a more progressive candidate like Mandela to run against — they said the same thing about Tammy, a liberal LGBTQ woman from Madison with a long congressional record,” she said. “But what they missed was that she could create a sincere connection with those working-class voters in rural areas and in Democratic-rich Dane [County] and Milwaukee.”

Wikler said every Democratic candidate has a “slightly different path to victory” and touted Democrats’ successful efforts to reduce Republican margins in the state’s deep red areas, swing the suburbs and increase the party’s standing in urban communities.

Sykes agreed the Democratic Party has what it takes to pull off a victory, but warned that a lot of what happens in November may be out of their control.

“Sometimes there are these atmospheric waves where it doesn’t matter what the campaign does,” he said. “If you’re running in a purple state and it’s a Republican year, none of that matters.”