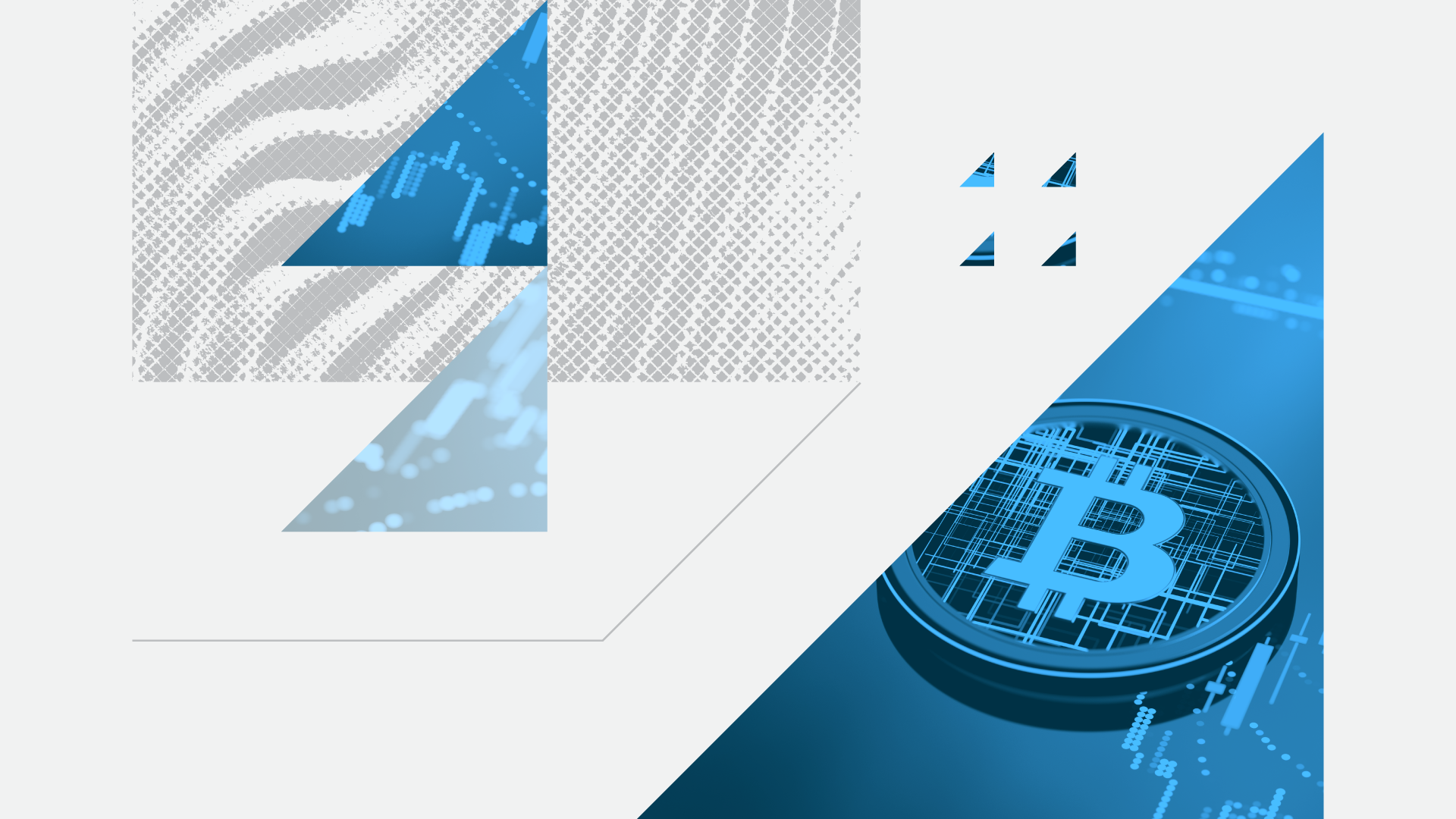 With bitcoin’s signature volatility on full display, its price could drive deeper demographic divides between owners and the general population. Cryptocurrency leaders should know that those who buy the bitcoin dip are predicting big price gains over the next six months, and these investors’ higher risk tolerance will keep them on the bitcoin rollercoaster.

Concerns over inflation and potential Federal Reserve interest rate hikes are causing market turmoil as investors shed risky assets of all types, especially bitcoin. But even amid the steep drop in bitcoin’s value, a majority of owners plan to purchase in the next month and “buy the dip.” New Morning Consult data shows which consumers are most likely to purchase bitcoin in the near future and why.

Retail investors’ interest in bitcoin hasn’t dampened since the price began dropping in November 2021. According to Morning Consult Brand Intelligence tracking, 21 percent of adults are considering purchasing bitcoin as of last week, equal to the share who said the same at the beginning of November. 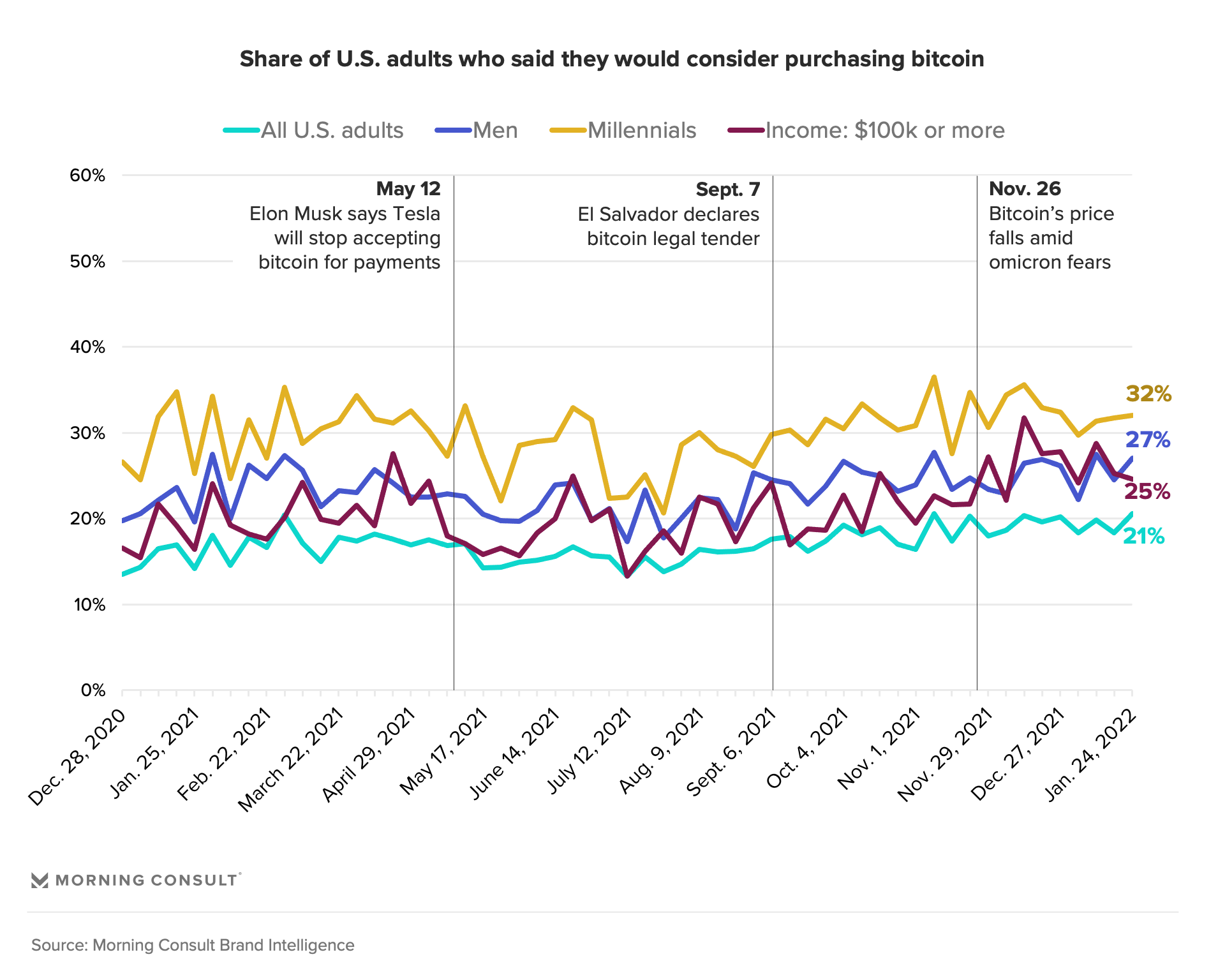 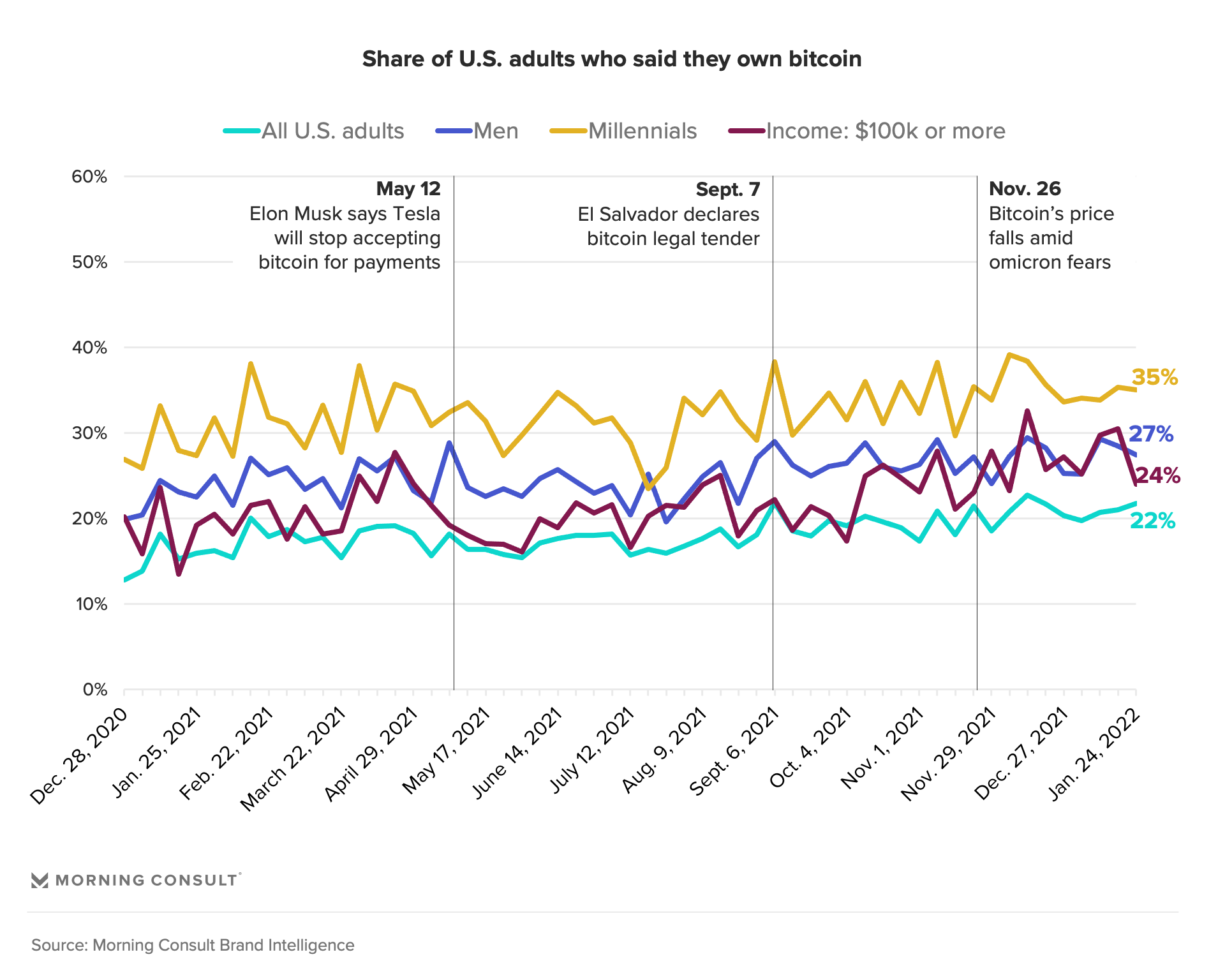 That means consumers have so far proved less nervous about bitcoin’s price drop this time around compared with last summer, when its price plummeted and even the most enthusiastic cryptocurrency demographics showed wavering confidence before ultimately buying the dip. Overall bitcoin purchase consideration dropped from 17 percent among all U.S. adults in May to a 2021 low of 13 percent in July.

Currently, the same groups that have historically driven cryptocurrency growth — millennials, men and high-income households — continue to show the most interest in purchasing bitcoin. This will deepen existing demographic divides when these groups continue to purchase bitcoin at higher rates than the general population.

To owners, bitcoin’s current price represents just a dip, not a permanent loss of value. On average, they expect the price to increase substantially, to $55,223 in six months. 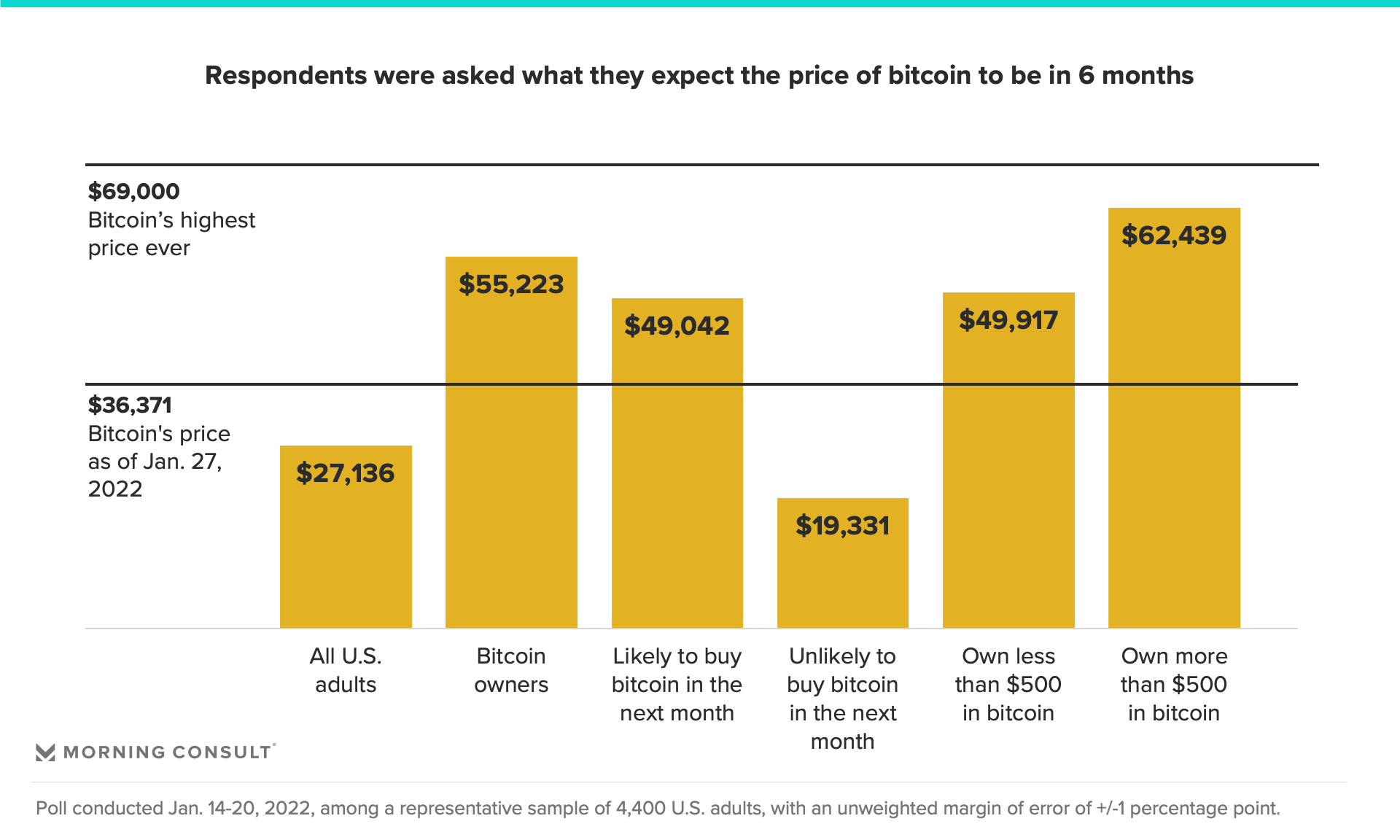 The highest estimate came from respondents who own more than $500 in bitcoin. This group expects bitcoin’s price to reach $62,439 in six months — a few thousand dollars shy of its all-time high value of $69,000 in November 2021. But bitcoin owners who have been in the cryptocurrency market for more than a year are also optimistic about the next six months, anticipating that the price will reach $57,950.

Current owners’ optimism about pricing and their steadfast commitment to bitcoin are driven by their view of cryptocurrency as an asset rather than a payment method. They’re in the game to make money, and it is their higher risk tolerance that’s keeping them there.

Bitcoin owners are over four times more likely to be willing to accept financial risk than the general population, and twice as likely to tolerate substantial or above-average risk. 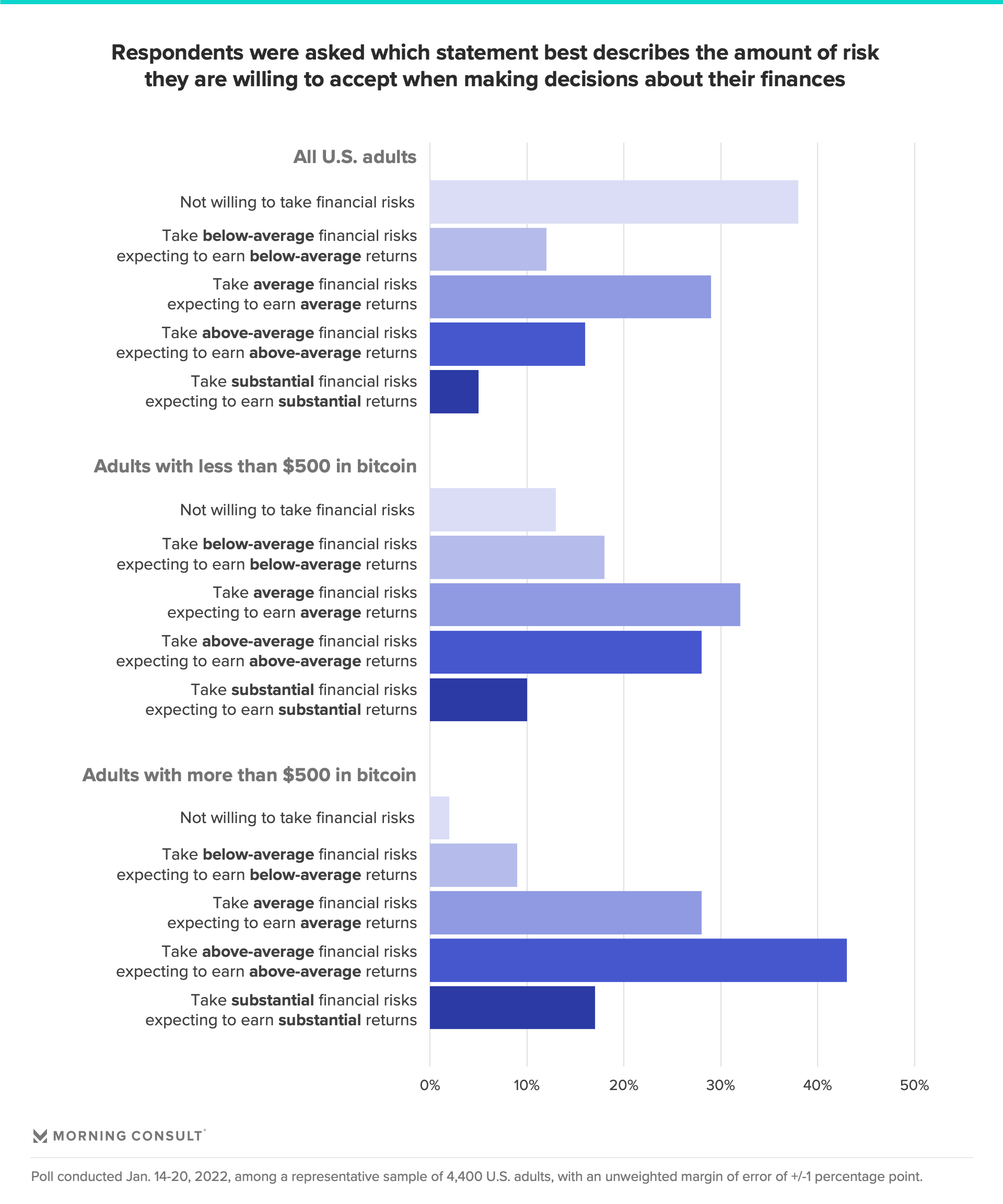 In case it’s not already clear from the price predictions, bitcoin owners aren’t in the game because they view cryptocurrency as the future of payments or for other idealistic reasons. Instead, 70 percent of bitcoin owners say making money is  their “major reason” for investing. Meanwhile, ideological motivations — believing that cryptocurrencies are the future and enjoying the community of people who invest in them — registered a relatively distant second and ninth, respectively.