Parsing Net Zero: Given Information on Emissions Types, Half of the Public Says Oil Sector Must Do More Than It Has Pledged

But when asked about pledges in broader strokes, the public is split: 31% say their level of ambition is “just right,” and a nearly equivalent share said they do not go far enough 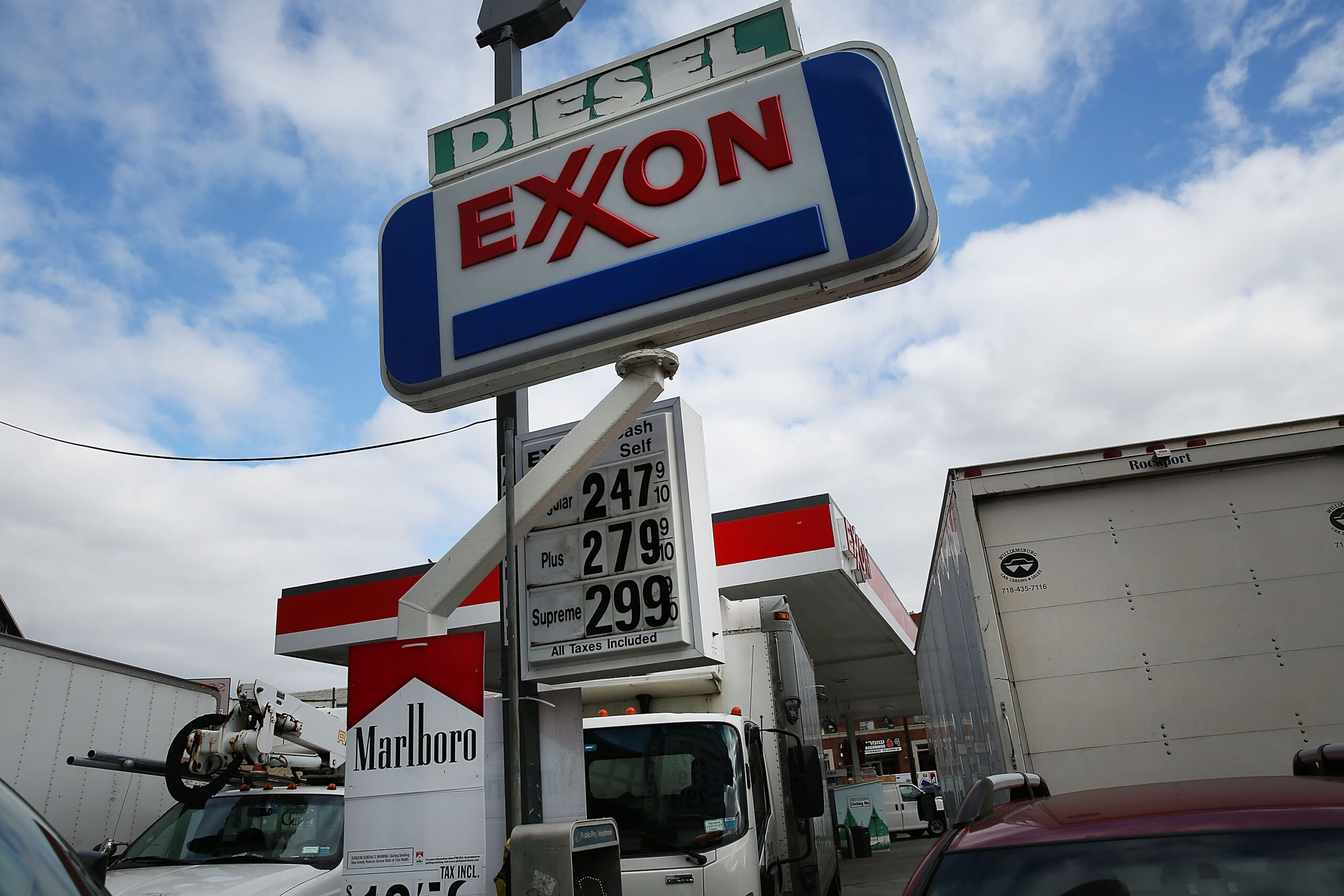 A sign for an Exxon gas station is pictured on Oct. 28, 2016, in New York City. A Morning Consult poll asked U.S. adults whether they thought commitments from oil and gas companies to reduce or offset greenhouse-gas emissions from their operations to net zero by 2050 are enough for taking action on climate change. A third of the public said such pledges are “not ambitious enough” while a nearly equal share said they are “just right.” (Spencer Platt/Getty Images)
By Lisa Martine Jenkins

Last month, Exxon Mobil Corp. joined the ranks of oil majors with a net-zero-by-2050 pledge. Or, more specifically, it is now among those pledging to zero out pollution from their own operations — known as Scope 1 and 2 emissions — on that timeline, leaving out the bulk of sector-related emissions.

These additional emissions are largely external, but connected to a company’s activities or products: for instance, those from an Exxon customer’s car burning the brand’s petroleum. Known as Scope 3, these emissions and their potential persistence is a question mark when it comes to how the world at large will reach net zero in a matter of decades.

While the language of “scope” and “net zero” is typically the province of policymakers and corporations, a new Morning Consult survey found that when the concepts are explained in terms of sector ambition and responsibility, much of the public believes these pledges are not enough.

A third of U.S. adults said the operational net-zero pledges from Exxon and its competitors like Chevron Corp., Royal Dutch Shell PLC and BP PLC are not sufficiently ambitious, though a nearly equal share said the commitments are “just right.” When asked specifically about the different emission types, over half of the public said major oil and gas companies have a responsibility to reduce Scope 1, 2 and 3 emissions.

“An oil and gas target is not credible without looking at the full life-cycle and addressing Scopes 1, 2 and both upstream and downstream Scope 3 emissions,” she said. “It is absolutely feasible to set targets around all scopes for an oil company or any type of company.”

On Feb. 8, the House Oversight and Reform committee is scheduled to hear from members of the boards of directors of Exxon, BP, Chevron and Shell Oil (Royal Dutch Shell’s U.S. subsidiary) on the topic of their emissions commitments, and specifically on whether they are consistent with 2015’s Paris Climate Agreement, which called for the world to reach net zero by 2050.

Related: As Momentum Builds for a Clean Energy Standard, Utility Trade Group Gets on Board — With Push for Partial Gas Credits

Both Shell and BP, which are headquartered in Europe, have made commitments to reduce at least some portion of their Scope 3 emissions, though neither have pledged to zero them out entirely by 2050. The major U.S. oil majors — Exxon and Chevron — have not.

“For products that lack practical short-term alternatives, constraining ExxonMobil’s production to reduce the company’s Scope 3 emissions simply transfers that production and associated emissions to another supplier,” said Meghan Macdonald, spokesperson for the company. “This would increase overall emissions if production shifts to a less efficient, higher-emission operator.”

Chevron’s net-zero aspiration also includes only Scope 1 and 2 emissions, and the company otherwise uses a carbon intensity metric for measuring its emissions progress, including from the use of its products. Senior corporate adviser Sean Comey said Chevron plans to pursue “lower-carbon production of traditional energy” while developing its “lower-carbon businesses.”

Given the context of dissatisfaction from roughly a third of the public regarding operational net-zero pledges, and asked whether the company anticipates making more aggressive emissions commitments in the future, Exxon’s Macdonald said the company will continue to update its “short-, medium- and long-term emission-reduction plans as technologies and policies evolve.”

Adults were asked the following: When it comes to taking action on climate change, do you think oil and gas companies’ pledges of reducing or offsetting greenhouse-gas emissions from their operations to net zero by 2050 are…

Poll conducted Jan. 21-23, 2022, among a representative sample of 2,210 U.S. adults, with an unweighted margin of error of +/-2 percentage points. Don’t know/No opinion responses are not shown.

In responses to requests for comment from Morning Consult, both Shell and BP pointed to the details of their commitments, but did not offer further comment.

The distinction between Scope 1, 2 and 3 emissions is one that is likely lost on the majority of the public, and that fact is a “big problem,” said Pedro Faria, a strategic adviser at CDP, a global carbon disclosure organization based in the United Kingdom.

However, Morning Consult’s Jan. 21-23 poll found that when the nuances of emissions scopes are explained in basic terms, the majority of the public says that oil companies should be responsible for all emissions, Scope 3 included.

Most Adults Say Oil Companies Responsible for All Emissions, Not Just Those From Operations
Provided information about the differences between Scope 1, 2 and 3 emissions, Democrats were likelier than Republicans to say fossil fuel companies should reduce all types

Share of adults who said major oil and gas companies have a responsibility to reduce the following types of emissions:

The question of scope resulted in a partisan discrepancy: 67 percent of Democrats said companies should be responsible for all types, compared with 38 percent of Republicans. However, the GOP share is still a plurality, a notable figure given the fact that only a 16 percent share of Republican adults said the operational pledges do not go far enough.

Faria said this likely comes down to differing perspectives on climate responsibility. Some people believe “oil and gas companies are at least co-responsible for the emissions of their products,” he said. “Others prefer to have a stricter view of responsibility, where you are responsible only for your own emissions. The emissions resulting from fossil fuel extraction are the responsibility of those that burn it.”

Both Faria and Cummis co-founded the Science Based Targets initiative, which urges corporations to make commitments that are in line with the demands of the 2015 Paris Climate Agreement.

Cummis, who still serves as the organization’s technical director, confirmed that Science Based Targets is working on a set of standards specifically for the oil and gas sector that will be vetted and peer-reviewed via a multi-stakeholder process that has already begun. That process involves outside experts and the companies themselves, as well as a public comment process. She said the initiative should probably have something concrete to publicize on that front within the year.

While participation in the initiative has “grown exponentially” since its start in 2015, she said “there is still a lot of work to do to get companies in some of the more greenhouse gas-intensive sectors to participate.”

The fossil fuel industry of 2050: Will their influence fade?

Whether the fossil fuel industry will exist in several decades as it does today is a question that underlies the survey data: To what extent will an oil company’s net-zero commitment matter if it is operating in a world that increasingly relies on renewables?

By 2050, Over a Third of Adults Think Oil Companies Will Have Less Influence
But adults under 35 are more likely to say their influence will increase
Poll conducted Jan. 21-23, 2022, among a representative sample of 2,210 U.S. adults, with an unweighted margin of error of +/-2 percentage points.

Meanwhile, there is minimal partisan variation in the share of adults who said they expect the industry to be more influential than it is now, but a gap of 13 percentage points between Democrats (42 percent) and Republicans (29 percent) on expecting it to be less.

But whatever their level of influence going forward, the industry’s evolving plans have so far escaped much public notice. Just 4 percent of U.S. adults said they saw, read or heard “a lot” about Exxon’s recent net-zero pledge; 24 percent said they heard “some,” 29 percent “not much” and 43 percent “nothing at all.”