For Australia’s Shaky Government, the Djokovic Saga Was a Welcome Diversion

The coming election is looking tighter than ever, and Prime Minister Scott Morrison is no longer the shoo-in he seemed months ago 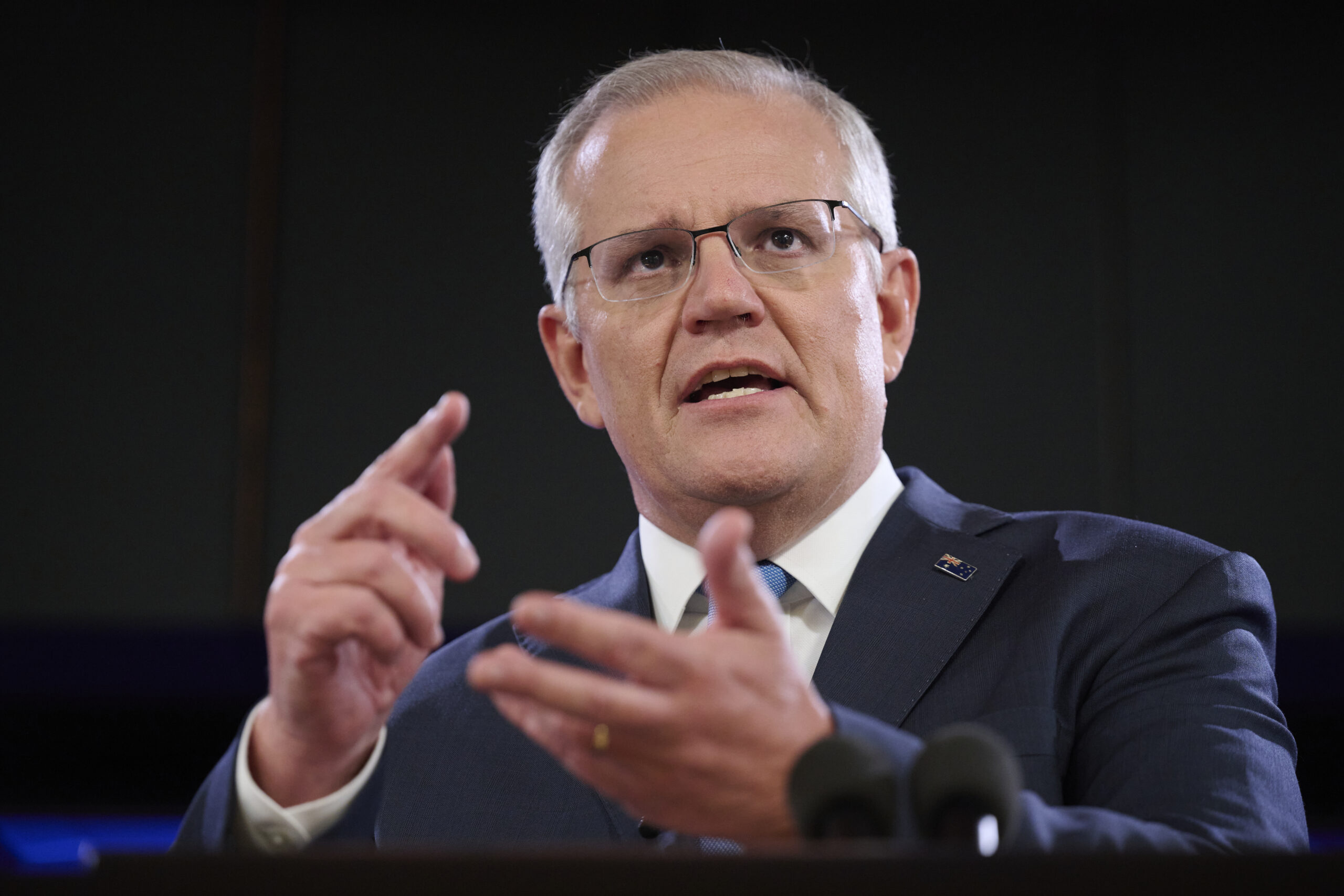 The Australian government’s decision to deport top-ranked tennis player Novak Djokovic last month was a rare recent public relations win for Prime Minister Scott Morrison, new Morning Consult polling shows. But as the country gears up for an election, it’s unclear if Morrison will be able to ride the high-profile fight to another term in office.

An overwhelming majority (88 percent) of Australian adults said they heard at least “some” news about Djokovic’s case, according to the Jan. 25-28 survey, while 76 percent believed the nine-time Australian Open champion should have been ineligible to compete this year because he was not vaccinated against COVID-19.

Fifty percent said that they supported Morrison’s handling of the case, though, compared with 35 percent who did not. The government canceled Djokovic’s visa for a second time on Jan. 14, more than a week after he entered Australia without satisfying vaccine requirements thanks to a health-related exemption that the commonwealth later judged to be invalid. 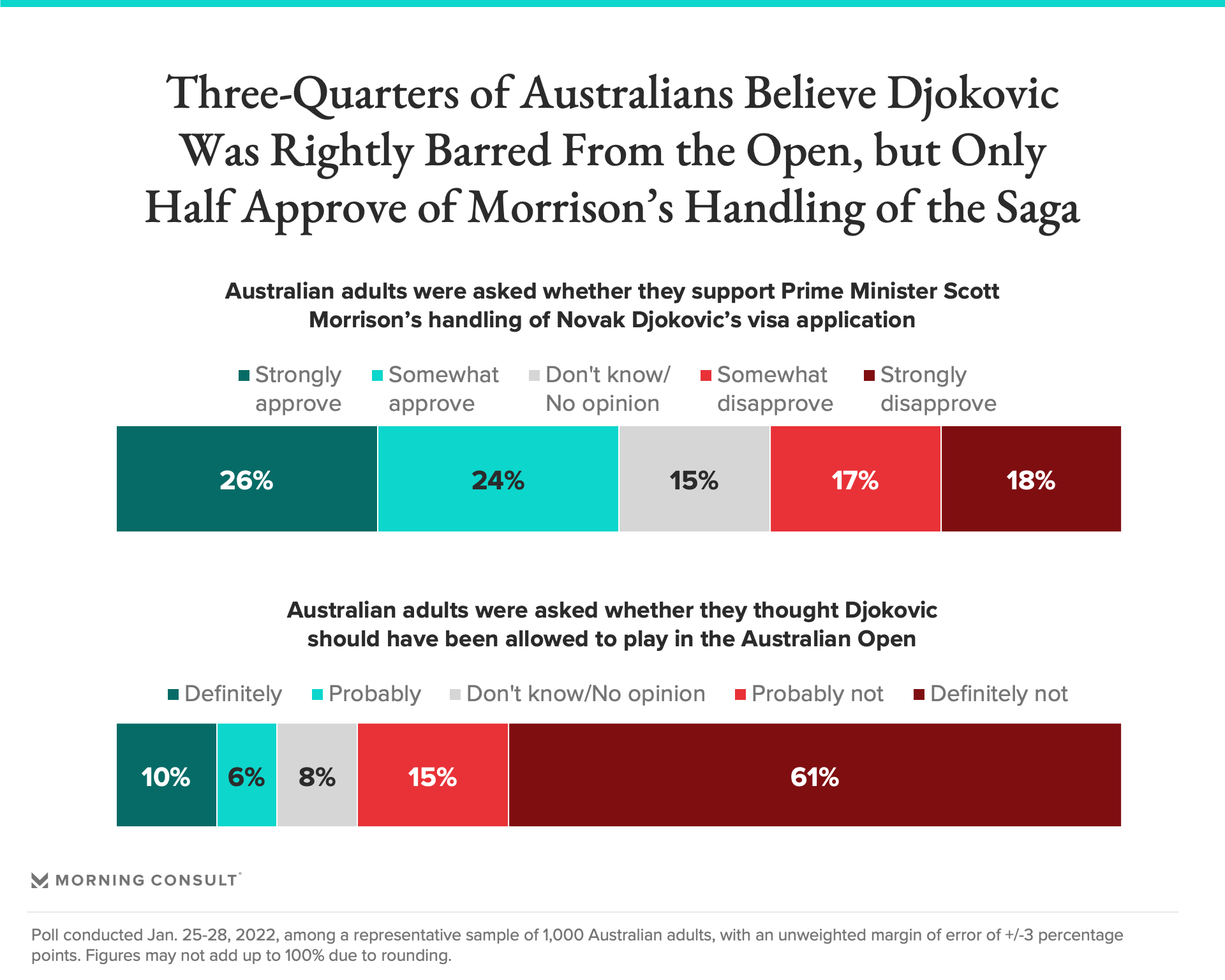 Many Australians were ultimately happy to see the government deport Djokovic, but many also thought he should not have been allowed to enter at all, said Glenn Kefford, a political science lecturer at the University of Queensland.

Australia has been among the most locked-down countries, with citizens abroad prevented from returning and those in the country banned from leaving. But there was a growing sense that the rules weren’t the same for everyone, Kefford said.

“Djokovic’s entry was seen by many as another example of wealthy individuals receiving special treatment, which was especially problematic given the lockdowns and border closures Australians across the country have faced,” he said.

Backlash to those lockdowns and border closures looks likely to play an influential role in the coming months: Australia is due to hold an election by May 21, and Morrison’s approval rating sits at 42 percent, according to Morning Consult’s Global Leader Approval Ratings data gathered Jan. 20-26.

Morrison’s Approval Rating Soared During the Onset of the Pandemic, Before Falling Back Down

Data points reflect 7-day moving averages of representative samples of at least 1,654 Australian adults each, with unweighted margins of error of up to +/-2 percentage points.

The pandemic was initially a political boon for Morrison, who saw his approval rating climb from 32 percent in March 2020 to 66 percent in May 2021.

Morrison, who won a surprise victory in 2019, had entered the pandemic with little public backing due to his handling of Australia’s “Black Summer” of megafires that caused nearly 500 deaths and tens of billions of dollars in damage. The period was punctuated by Morrison’s decision to leave for vacation in Hawaii during the destruction, declaring “I don’t hold a hose, mate.”

A more proactive approach to the pandemic that followed, and the government’s successful “zero COVID” policies throughout 2020 and most of 2021, helped swing his numbers back up. But the pandemic bump has faded in recent months.

Damon Alexander, a lecturer in politics and public policy at the Swinburne University of Technology in Melbourne, said Morrison’s sinking public image has coincided with a shift from zero COVID to a policy of mitigation.

“The state governments were responsible for the lockdowns, so they had carried most of the political risk. That’s now changed,” Alexander said. “We moved to a model of rapid antigen testing, and there’s been absolutely no preparation.”

Shortages of rapid antigen tests (RATs), which are now often necessary to travel or attend public events, have caused growing resentment, he said, with the government largely shirking responsibility.

“It’s been almost impossible if you’re just an ordinary person to find that RAT test when you need them, and that’s really started to bite on people,” Alexander said. “It’s also happened at a time where they’re pulling back from some of the early economic support they had provided, and people are concerned that economic activity still seems about the same as it was during the lockdowns.”

Morning Consult polling now shows Australians are split on the federal government’s recent handling of the pandemic, with 47 percent of adults approving and 45 percent disapproving, and 70 percent say its COVID-19 policies will have at least “some” impact on their vote. 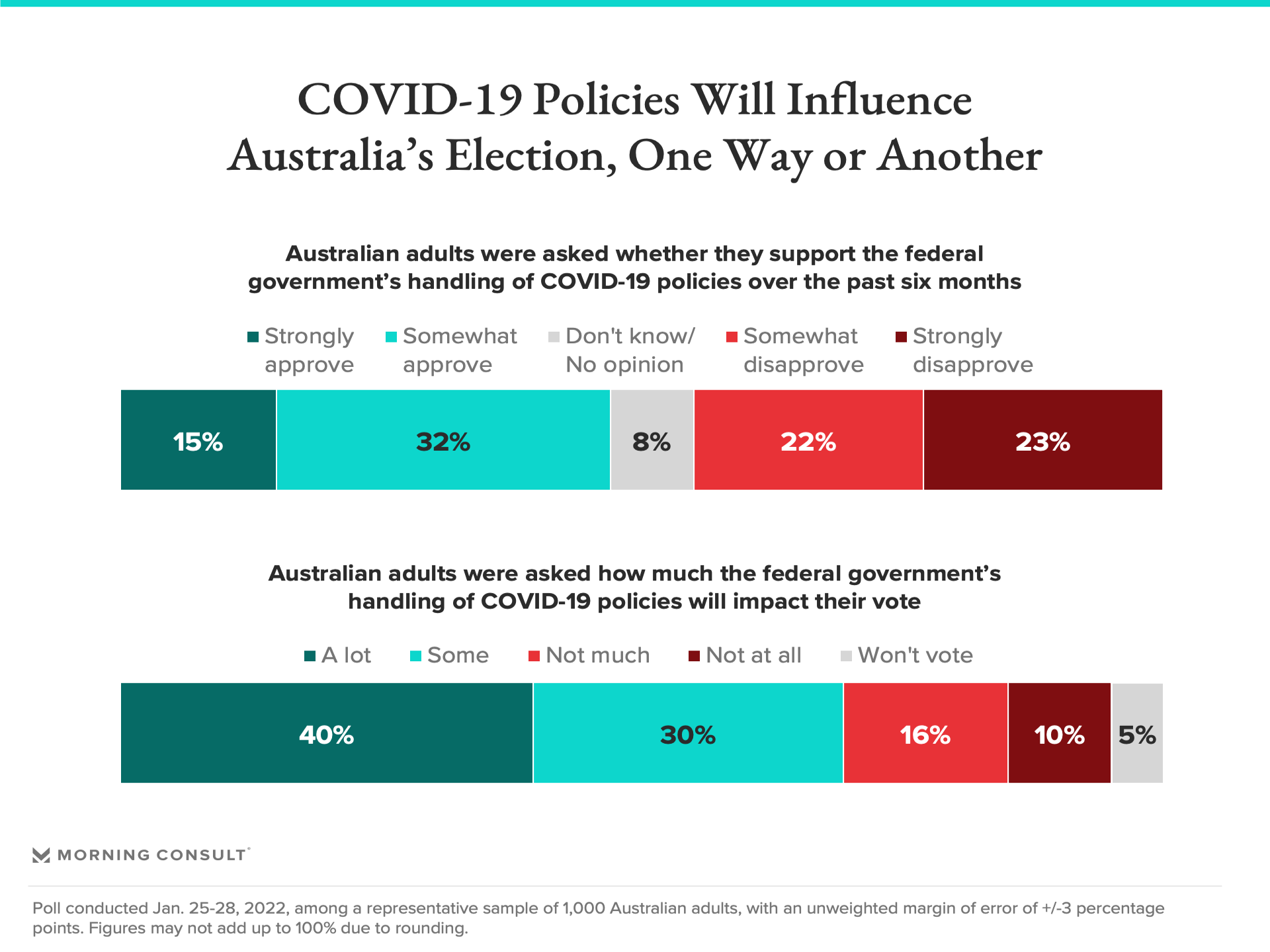 A Jan. 30 poll from The Australian, a Rupert Murdoch-owned newspaper, showed Morrison’s Liberal-National coalition trailing the Labor Party in voting intentions by 12 points, the prime minister’s worst figure since he took power.

So far, the opposition, led by Anthony Albanese, has been content to sit back and watch. Alexander said Labor is still spooked by its surprise loss in 2019, blaming the party’s expansive array of proposed tax and spending changes. That has caused it to adopt a “small target” approach of “being quiet and letting the damage roll on” for Morrison.

“Labor got burned last time around,” he said, so the party swung in the opposite direction. “They won’t get away with that all the way up to the election; there will be pressure for them to start rolling out alternative policies.”

For his part, Morrison is trying to delay calling the election until as close as possible to the May 21 deadline, hoping that the omicron wave dissipates and the political debate moves back to territory more perilous for Labor.

“The opposition will continue to campaign on the government’s record during the pandemic as long as they can, and this explains why the government is looking to hold off the election as long as possible,” said Kefford. Morrison will seek to argue that Labor “cannot be trusted on the economy or national security,” he said.

Morrison’s office did not respond to a request for comment.

Yet regardless of whether Morrison or Albanese leads the next government, there will be little change in one important area: foreign policy, where Australia balances a security reliance on the United States with growing trade dependence on China.

Albanese has fought insinuations that he would move Australia closer to China, rejecting entreaties from party elder and former Prime Minister Paul Keating — who sits on the board of the China Development Bank — to divorce Australia from America. Albanese has said China’s recent bullying had made that impossible.

Australians View the U.S. Much More Positively Than China

*Net favorability is the share of respondents with a favorable view minus the share with an unfavorable view.
Data points reflect 7-day moving averages of representative samples of at least 826 Australian adults each, with unweighted margins of error of up to +/-3 percentage points.

China is Australia’s largest trade partner and purchases as many exports as Australia’s next seven biggest trading partners combined — or about 39 percent of the total — according to data from the Australian Bureau of Statistics.

But Beijing’s efforts to force Australia to alter its policies by banning certain imports have backfired, according to John Blaxland, a professor of international security and intelligence studies at the Australian National University in Canberra.

“This is the consequence of ‘wolf warrior’ diplomacy and China’s exercise of sharp power. Its bully boy behavior has generated a strong reaction,” Blaxland said. “The overwhelming majority of Australian voters are supporters of the U.S. alliance and have a healthy degree of skepticism of China’s actions.”

Morning Consult polling conducted Jan. 24-30 shows 48 percent of Australians have a favorable view of the United States, compared with 13 percent who view China in the same light. Australian adults are also nearly twice as likely to have an unfavorable view of China (68 percent) as they are of America (35 percent).

Blaxland said China’s aggressive treatment of Australia had steeled both sides of the political spectrum, as well as the country’s business community, with Labor now adopting only a “rhetorically distinct, if not substantively different” position.

“The Huntingtonian view of Australia as a kind of twilight zone between East and West has vaporized. Australia is completely strategically siding with the United States,” he said. “A change of government, should that happen — and that’s a big ‘if’ — could provide an excuse only for a change in the optics.”