Amid scrutiny of China, 41% of U.S. adults say they oppose the decision to hold the Winter Games there 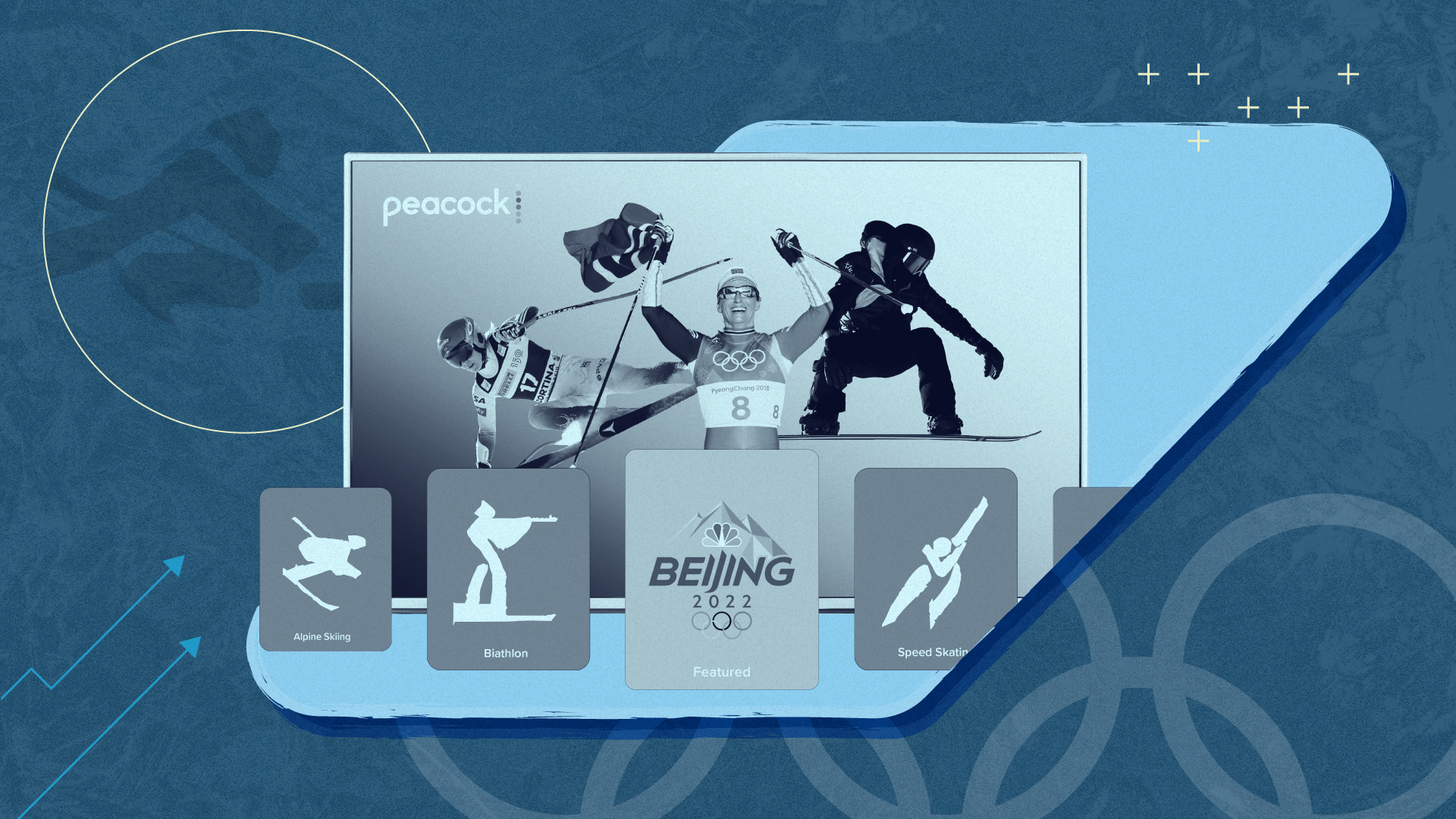 One in 5 viewers of the Tokyo Summer Games said it was difficult to find the events they wanted to watch. NBCUniversal is making it much easier to find events on Peacock for the Beijing Games but that's just one of several problems that needs addressing. (Getty Images / Morning Consult artwork by Ashley Berry)
By Alex Silverman & Sarah Shevenock

Postponed a year and held at the height of Japan’s COVID-19 outbreak, the 2021 Tokyo Summer Games seemed like they would be a uniquely difficult undertaking for U.S. Olympic broadcaster, NBC. Once those games were in the rear-view mirror, however, it quickly became clear that Tokyo might have been a cakewalk compared to what was coming a few months later in Beijing.

“We said Tokyo was going to be one of the most challenging Olympics of our lifetime. I retract that,” said Molly Solomon, executive producer and president of NBC’s Olympic coverage, in a Jan. 20 video presentation. “Beijing is unique in this regard.”

In addition to the well-documented logistical hurdles presented by China’s restrictive coronavirus containment protocols, which prompted NBC to keep the vast majority of its broadcast personnel , the Beijing Games have forced NBC to rethink its promotional strategy and overhaul its approach to streaming.

“There is a concerted effort not only to minimize the focus on what’s going on in China but also to put the focus on ‘The Games are coming, you can access them anywhere,’” said Damian Benders, general manager at digital media company My Code Media.

To that end, NBCUniversal is making all events available to Peacock subscribers live, marking a change from Tokyo, when only select events were available live to those without a pay-TV subscription. But this is just one step in a much broader plan to maximize the return on one of its largest programming investments. (Peacock representatives declined to make someone available for this story, while NBC Sports did not respond to a request for comment.)

Sentiment in the United States about China has shifted dramatically since NBC last aired an Olympic Games from Beijing in 2008. Then, first-time host country China was able to present itself as a rejuvenated and rising superpower amid the financial crisis in the western world.

According to Rick Burton, former chief marketing officer of the U.S. Olympic Committee (now known as the U.S. Olympic and Paralympic Committee), the 2008 Summer Olympics were seen as a coming-out party for China, highlighted by a particularly grandiose Opening Ceremony at Beijing’s new “Bird’s Nest” stadium. Featuring hundreds of dancers and fireworks, many in the press billed the patriotic spectacle as the best Opening Ceremony in Olympic history.

In its promotion of the 2008 Games, NBC trumpeted its coverage as “live from China” over sprawling shots of the Great Wall, promising to take viewers on a journey to “an extraordinary land.”

By comparison, NBC’s early promotion of the 2022 Winter Games has been muted, a reflection of the starkly different sentiment toward China amid a humanitarian crisis and global pandemic. The White House’s declaration of a diplomatic boycott of the Games based on the “ongoing genocide and crimes against humanity in Xinjiang and other human rights abuses” has intensified scrutiny of the host country.

In a Morning Consult survey conducted late last month, 41 percent of U.S. adults said they oppose the International Olympic Committee’s holding the Games in China, compared to just 26 percent who said they support the IOC’s decision.

Traditionally, Olympic logos featuring the host city and year have been prominently displayed in promotional spots. But this year, NBCUniversal has strategically downplayed the Beijing connection, moving the Olympic logo to the corner of commercials and other advertisements, instead of making it the centerpiece. Trailers airing on NBCUniversal networks have also shied away from highlighting China itself in favor of footage of athletes from previous games.

“The political climate with China has gone deeply negative over the last six years or so,” said Matt Voda, chief executive of the marketing strategy company OptiMine, who added that NBC might be de-emphasizing the host country to avoid consumer backlash.

Burton, now the David B. Falk professor of sport management at Syracuse University, said marketing for this year’s games has been “remarkably understated for a variety of reasons,” including the ongoing pandemic, a short turnaround from the Tokyo Olympics and the volatile geopolitical situation with China.

“There is a sensitivity right now that people in America may have concerned views about China,” Burton said, noting that previous Olympiads, including Sochi 2014 and Rio de Janeiro 2016, also raised concerns about policies in the host country. “It’s not unknown to the sponsors and to that end a group like NBC could be taking that into account.”

For Sochi 2014, NBC did feature imagery from host country Russia, but emphasized the iconic Olympic moments and athlete stories, narrated by network star Giancarlo Esposito, in TV spots. And in 2016, a spot for Rio’s Opening Ceremonies focused on the global aspect of the Games, rather than the host city. But one year ahead of those Games, NBC clearly featured imagery from Brazil in a teaser trailer.

Shifting the marketing emphasis away from the host country has provided NBC with an opportunity to highlight other aspects of the Games — most notably, its fledgling streaming service, Peacock.

For the second time in less than a year, NBCUniveral is looking to the Olympic Games to provide its 18-month-old platform with a shot in the arm. This time, however, the Comcast Corp. subsidiary is taking a very different approach.

During last summer’s Tokyo Games, the majority of live Olympic programming was reserved for pay-TV subscribers, who could watch either on one of the company’s TV channels or via authenticated streaming on NBCOlympics.com. Only a select few events were available live on Peacock, with mostly replays and highlights available on the service’s free tier and U.S. men’s basketball games live-streamed on the paid “Premium” tier.

In a Morning Consult survey conducted following the Tokyo Olympics, 1 in 5 individuals who said they watched “a lot” or “some” of the Summer Games said it was difficult to find the events they wanted to watch, either on TV or via streaming — something NBC is seeking to address for Beijing.

“I would be the first to admit we realized we had to make it easier for the viewer to navigate that, to digest the amount of Olympic content,” said NBC Sports Group Chairman Pete Bevacqua during the Jan. 20 presentation.

For the Beijing Olympics, the company is putting every second of live and archived Olympic coverage on its Premium tier, which is available for $4.99 a month with ads and $9.99 ad-free, as well as on its linear networks. For the first time, cord-cutters will have access to all of the same live Olympic action as pay-TV subscribers do, all in one place.

Share of U.S. adults who said they or someone in their household currently subscribes to the following streaming services:

The hope is that offering cord-cutters the keys to the Olympic castle will attract more long-term streamers to Peacock, which the company recently revealed has 9 million paid subscribers. NBCUniversal will also double the amount it spends on content for the platform to $3 billion this year.

NBC has prominently featured Peacock-centric messaging in its pre-Olympics marketing campaigns, and Solomon said the company’s coverage will use graphics to ensure viewers know which events are coming up — and how they can watch them.

In polling before and after the Tokyo Olympics, the share of U.S. adults who said they or someone in their household subscribed to Peacock increased modestly from 21 percent to 25 percent. Ahead of the Beijing Games, 29 percent of respondents said they live in a Peacock home, indicating marginal growth during the six-month period between Games.

Poll conducted Jan. 25-27, 2022, among a representative sample of 1,484 U.S. adults who said they plan to watch “a lot,” “some” or “not much” of the Winter Olympics, with an unweighted margin of error of plus or minus 3 percentage points.

Even among younger expected viewers, who were more likely than their older peers to say they plan to stream the Games, linear TV was the most popular option. Respondents were allowed to choose multiple methods for watching. NBCUniversal will be content if viewers tune in en masse regardless of platform, but with so much investment in Peacock, it needs the Games to provide it a tangible boost.

Getting Americans excited about the Winter Games is typically more challenging than doing so for the Summer Olympics. Since 2000, four of the top five most-viewed Games have occurred during the summer, with the top-ranked 2002 Salt Lake City Winter Games the only outlier. In addition, Morning Consult data shows that Americans are more likely to prefer the summer competition to its winter counterpart, something that Benders attributed to the relatability of summer sports.

“The Winter Games are just a little bit less popular and less identifiable with the larger portion of the audience,” Benders said. “Most people have been asked to run around a track at some point in their life, but there’s very few people who have had the opportunity to compete in figure skating or bobsledding.”

Share who said they preferred the following types of Olympic competition:

And unlike the Tokyo Summer Games, during which NBC prominently featured well-known athletes like gymnast Simone Biles and swimmer Katie Ledecky, the Beijing Games don’t offer much in the way of household names.

NBC is relying primarily on snowboarders Shaun White and Chloe Kim, skier Mikaela Shiffrin and figure skater Nathan Chen for its advertising campaign. Only White, however, is particularly well-known among the American public, with just over half (54 percent) of respondents having heard of him. Kim was the next most-known athlete, with 32 percent name recognition. Women’s figure skating, traditionally a marquee event featuring an American darling, also has muted awareness this time, with just 24 percent of Americans having heard of top skater Mariah Bell.

“If they’re not popular and famous beforehand, it makes it more difficult to create the buzz around it until the Games are happening,” Benders said.

However, this uncertainty could provide an opportunity for NBC and other brands to react to the Olympic moments that are resonating most with viewers as the Games unfold, by leveraging newly minted fan-favorite athletes, he said.

“One of the things that NBC is counting on is the real-time response marketing that takes place when amazing things happen,” Benders said.

For the sake of Peacock, NBC is hoping that many amazing things are yet to come.