Super Bowl Viewership Poised to Increase This Year Thanks to Gen Zers, Millennials

Sixty-seven percent of U.S. adults say they'll watch the Super Bowl this year, up from 61 percent who said they'd do so before last year's big game, according to Morning Consult data. (Mockups Design / Morning Consult artwork by Kelly Rice)
By Alex Silverman

Sunday’s Super Bowl between the Cincinnati Bengals and Los Angeles Rams is likely to be the cherry on top of an already stupendous season for the NFL and its broadcast partners. According to a new Morning Consult survey, 2 in 3 U.S. adults expect to watch this year’s championship game. 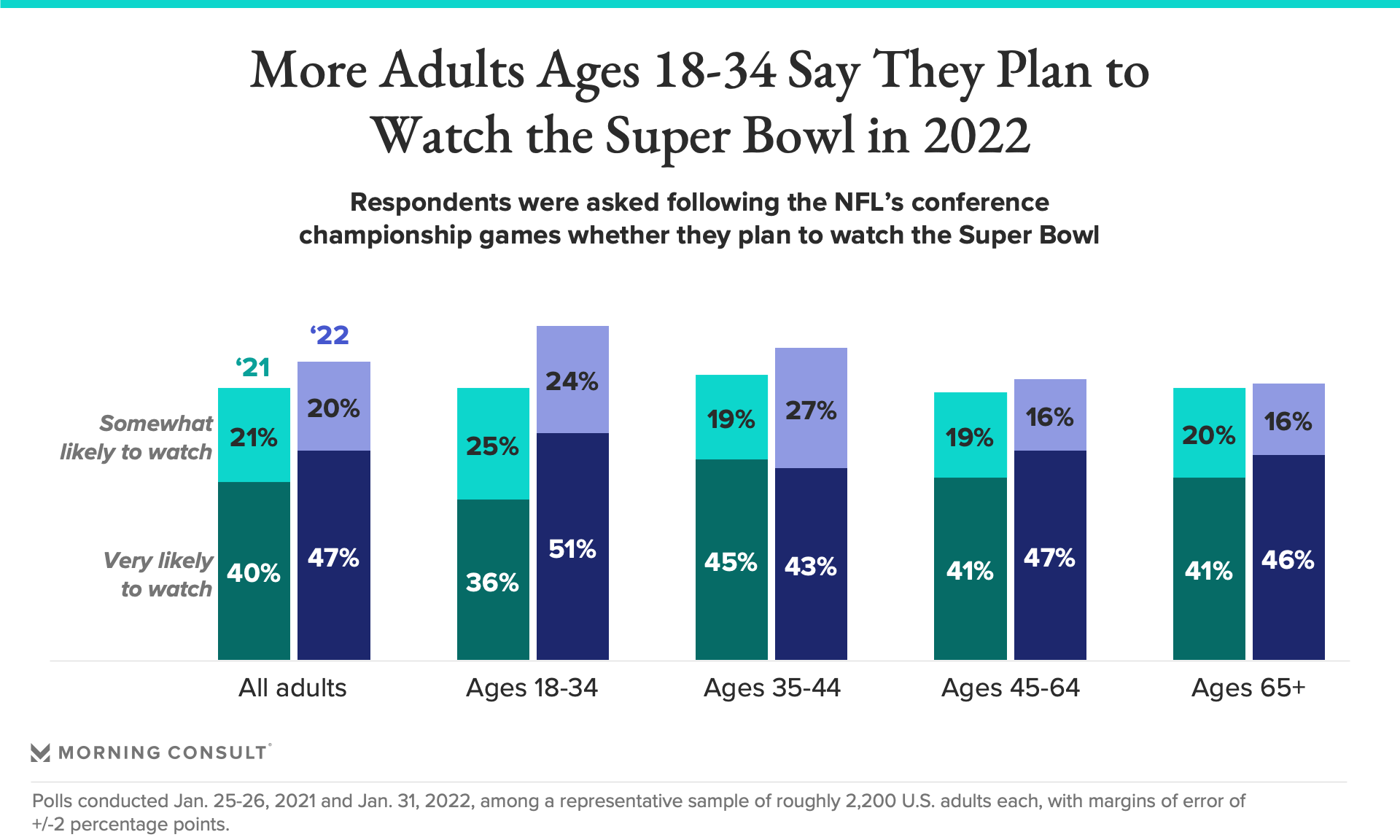 Related: 1 in 4 U.S. Adults Say They’ll Bet on the Super Bowl This Year

Even in its worst year, the Super Bowl is the most-watched program on American TV by a large margin, netting a financial windfall for the broadcaster. Still, all signs point to NBC getting the better of CBS in their Super Bowl swap, which resulted in CBS airing Super Bowl LV last year and NBC airing Super Bowl LVI this year in concert with its Winter Olympics coverage.

NBC said it sold its last remaining 30-second Super Bowl commercial spots for as much as $7 million, a new record and up from the $5.8 million to $6.2 million the network was seeking during upfronts in the aftermath of last year’s record-low performance.

The network’s ability to continue to increase prices is likely a reflection of the NFL’s strong ratings momentum, as well as the belief that this year’s big game is set to deliver a larger audience than last year’s. If the game delivers an average audience of more than 100 million across NBC, Telemundo and digital platforms, Fox, which has already started selling ads for Super Bowl LVII in 2023 for more than $6 million apiece, would have a case to raise rates even more.

While there’s reason for optimism, it’s impossible to account for the entertainment value of the game in viewership projections. The lopsidedness of the Buccaneers’ 2021 victory over the Chiefs, for instance, certainly contributed to the game’s 16-year viewership nadir.

The Jan. 31, 2022, poll was conducted among a representative sample of 2,211 U.S. adults, with an unweighted margin of error of plus or minus 2 percentage points.