Americans Support Sending Troops to Russia in Only One Scenario

If Russia does invade, there’s only one scenario in which a plurality of Americans support sending troops: a complete Russian takeover and occupation of Ukraine.

When it comes to preventing a Russian invasion of Ukraine, American voters prefer negotiations and sanctions to troop deployment. If Russia does invade, there’s only one scenario in which a plurality of Americans support sending troops: a complete Russian takeover and occupation of Ukraine. 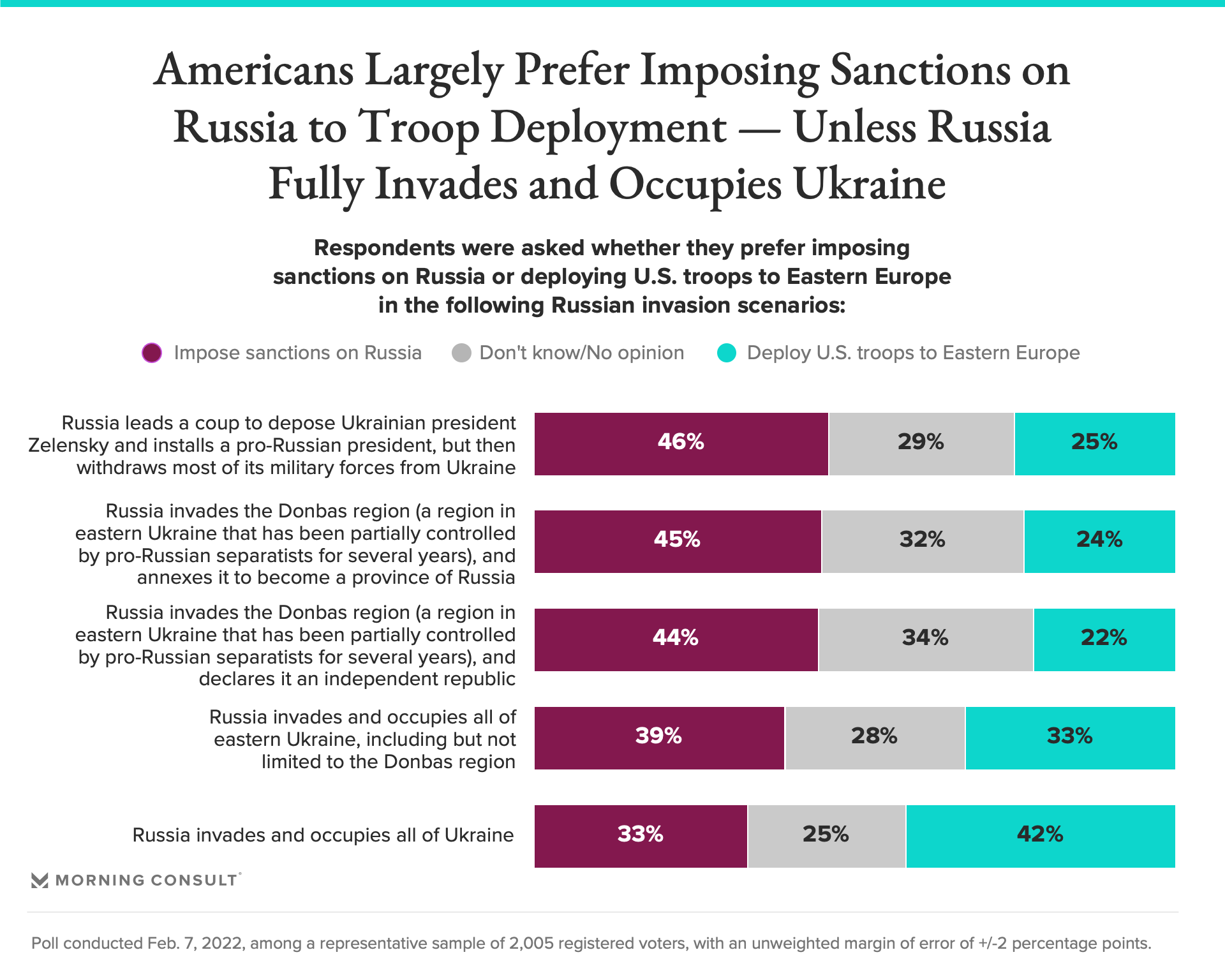 “Tracking Global Opinion on the Russia-Ukraine Crisis” is based on Morning Consult’s daily interviews with thousands of respondents across the United States, Russia and in key European countries, including France, Germany, Italy, Poland, Spain, Sweden and the United Kingdom.

How the Russia-Ukraine crisis is playing out among Americans

If Russia does invade, U.S. voters prefer imposing sanctions to deploying troops in nearly all Russian invasion scenarios, including Russia’s deposing Ukrainian president Volodymyr Zelensky and occupying the Donbas region and/or all of eastern Ukraine. As mentioned above, the sole exception is a complete Russian takeover and occupation of Ukraine, in which case 42 percent of Americans support sending troops. If the United States does impose sanctions, Americans want a maximal approach.

How the Russia-Ukraine crisis is playing out among Europeans

The bulk of respondents in France, Germany and the U.K. support sanctions if Russia invades, but they are substantially less enthusiastic than Americans about keeping the door open to NATO membership and highly uncertain about their support for canceling Nord Stream 2 (particularly in Germany).

That said, adults in Europe — including those in the above countries, as well as Italy, Poland, Spain and Sweden — hold generally unfavorable opinions of Russia amid the Ukraine crisis.

How the Russia-Ukraine crisis is playing out among Russians

Key metrics of Russian sentiment suggest that Russians are relatively unfazed by the threat of sanctions and war with Ukraine. Russians continue to be more likely than not to think their country is moving in the right direction, per Morning Consult’s Country Trajectory data. Consumer confidence has similarly remained relatively flat, according to Morning Consult’s Index of Consumer Sentiment for Russia.

Download the full report to read more about global perceptions of Russia across the United States and Europe, in addition to deeper insight into the policy, economic and military implications across key regions.