As Silicon Valley Faces Greater Scrutiny, the Public Increasingly Views Big Tech as Powerful and in Need of More Regulation

Amid intensifying antitrust efforts, the share of U.S. adults who said they supported greater scrutiny of tech giants has climbed 9 points in two years 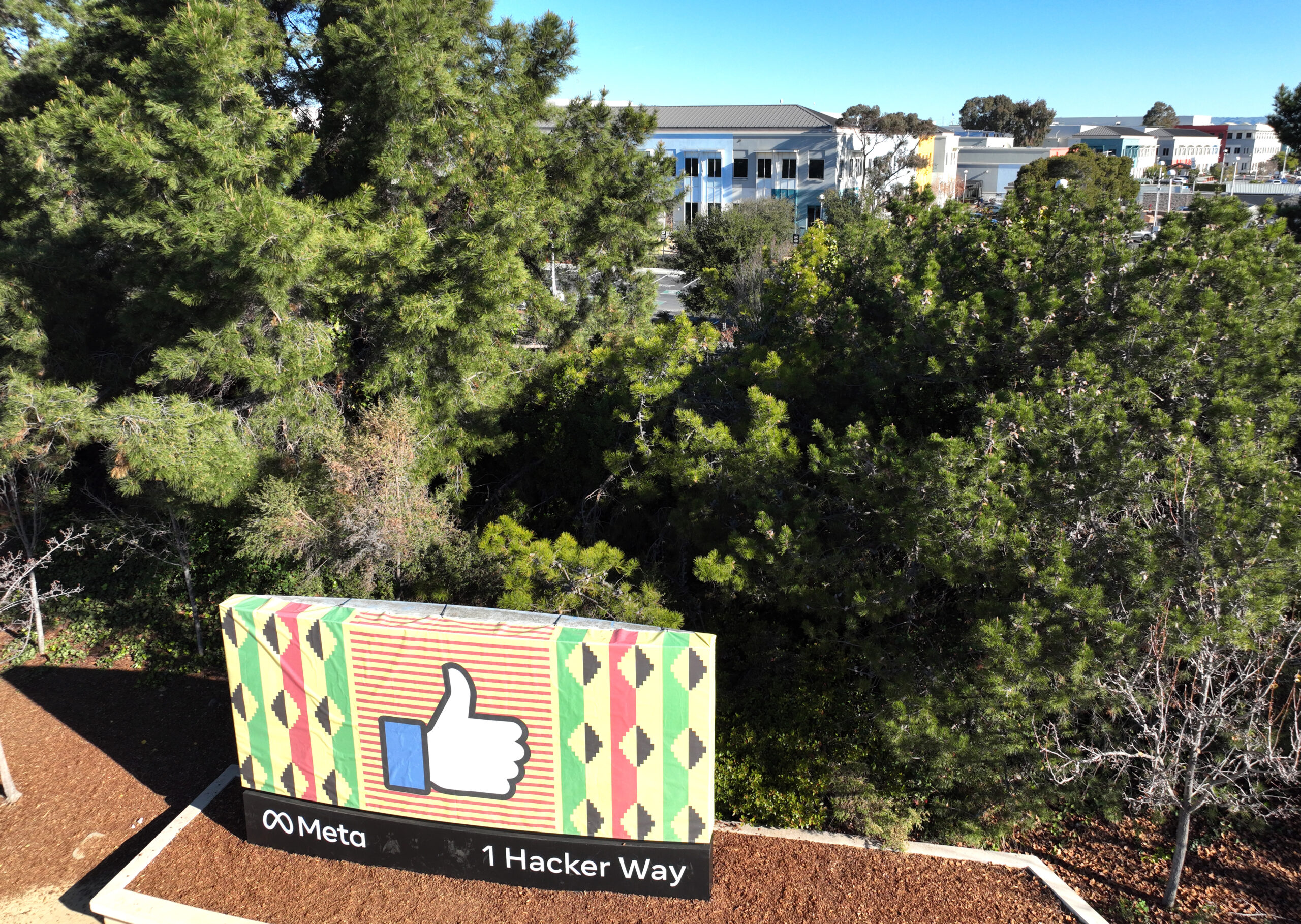 A view of Meta Platforms Inc. headquarters in Menlo Park, Calif., on Feb. 2, 2022. A new Morning Consult poll found that 67 percent of U.S. adults believe that the benefits some large tech companies provide to their customers is not an acceptable tradeoff for the industry’s increasing power and the undermining of small businesses. (Justin Sullivan/Getty Images)
By Chris Teale

In recent weeks, the Senate Judiciary Committee has brought antitrust legislation back into focus, advancing the American Innovation and Choice Online Act and the Open App Markets Act, both of which lawmakers said would prevent big tech companies from stifling smaller competitors.

The public, meanwhile, appears supportive of the idea that the consumer benefits of big technology companies do not outweigh their having unfettered power.

A new Morning Consult poll found that 67 percent of U.S. adults believe that the benefits some large tech companies provide to their customers is not an acceptable trade-off for the industry’s increasing power and the undermining of small businesses, while the remaining 33 percent said the benefits are worth it. Those figures are virtually unchanged from a Morning Consult poll conducted in December 2019.

But while much of the public said it wants to see big tech companies reined in, polling also indicates it is reliant on many of the services they provide, underscoring consumers’ prioritization of convenience – and the tall task lawmakers and regulators face in getting total public buy-in for their antitrust pursuits. 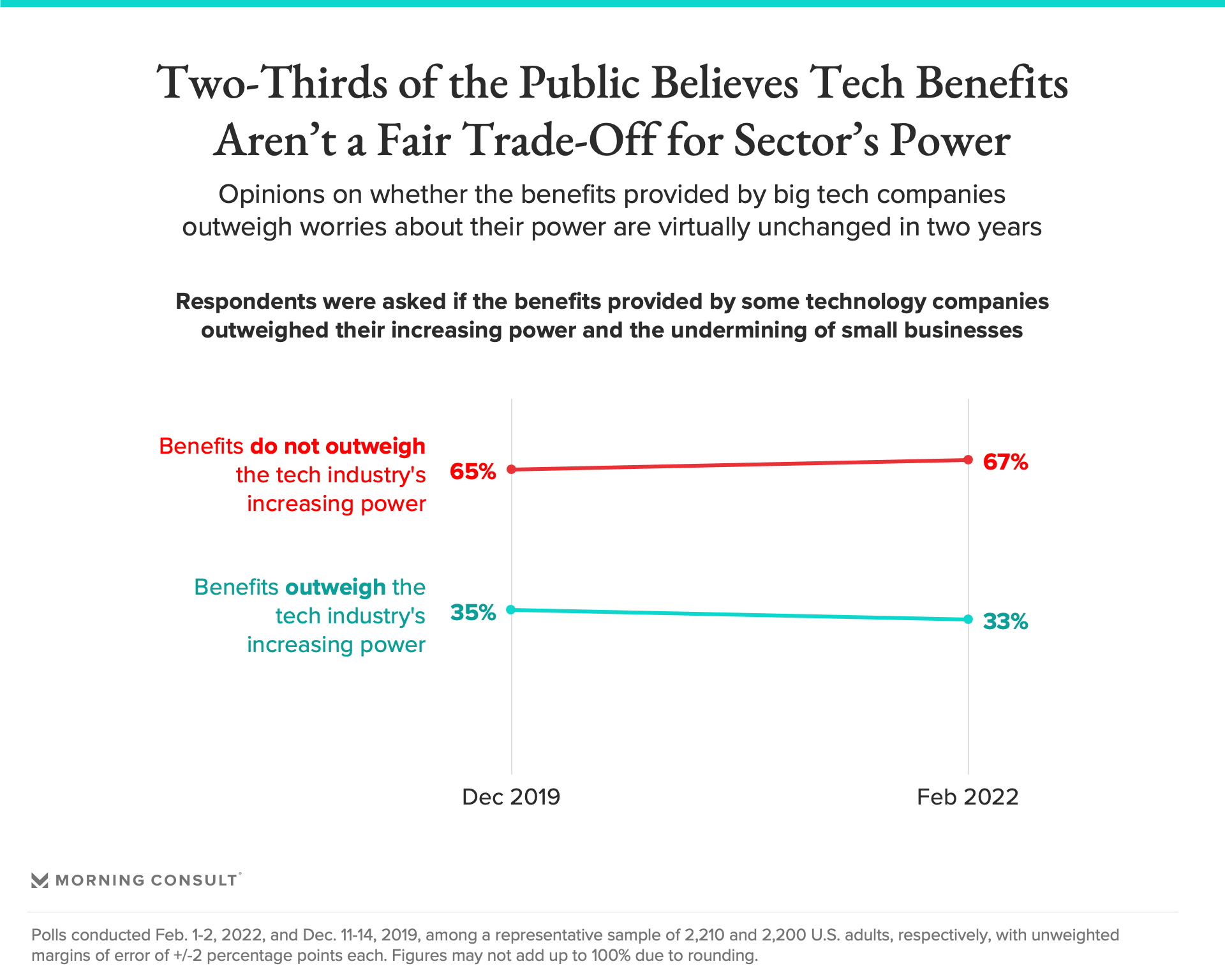 Lawmakers said those pieces of legislation — which respectively prevent large tech companies from prioritizing their own products and services over others and require app stores to make distribution easier — are necessary as a few dominant companies like Amazon.com Inc., Apple Inc. and Meta Platforms Inc. dominate various sectors of life including retail and communications.

The public has strong feelings about the power of the technology sector compared to others. In a list of various sectors, 60 percent of adults said tech companies had “a lot” of power — a share that has climbed 8 points since December 2019. 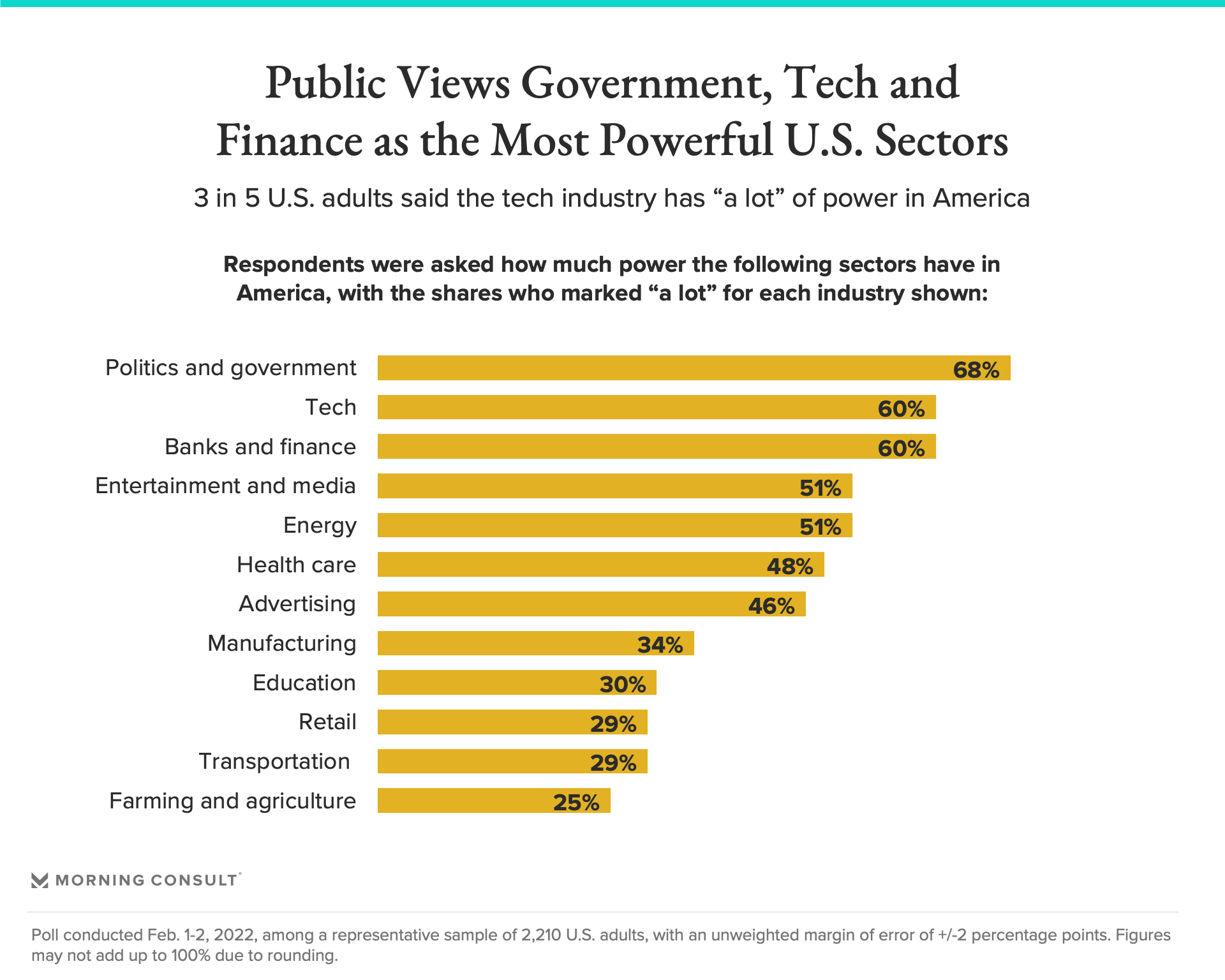 With that power apparently comes increasing calls for more regulation: 38 percent of the public said the federal government should regulate technology companies more, a 9-point increase from the 2019 survey. The share who said that tech companies are regulated enough (24 percent) was unchanged over the past two-plus years. 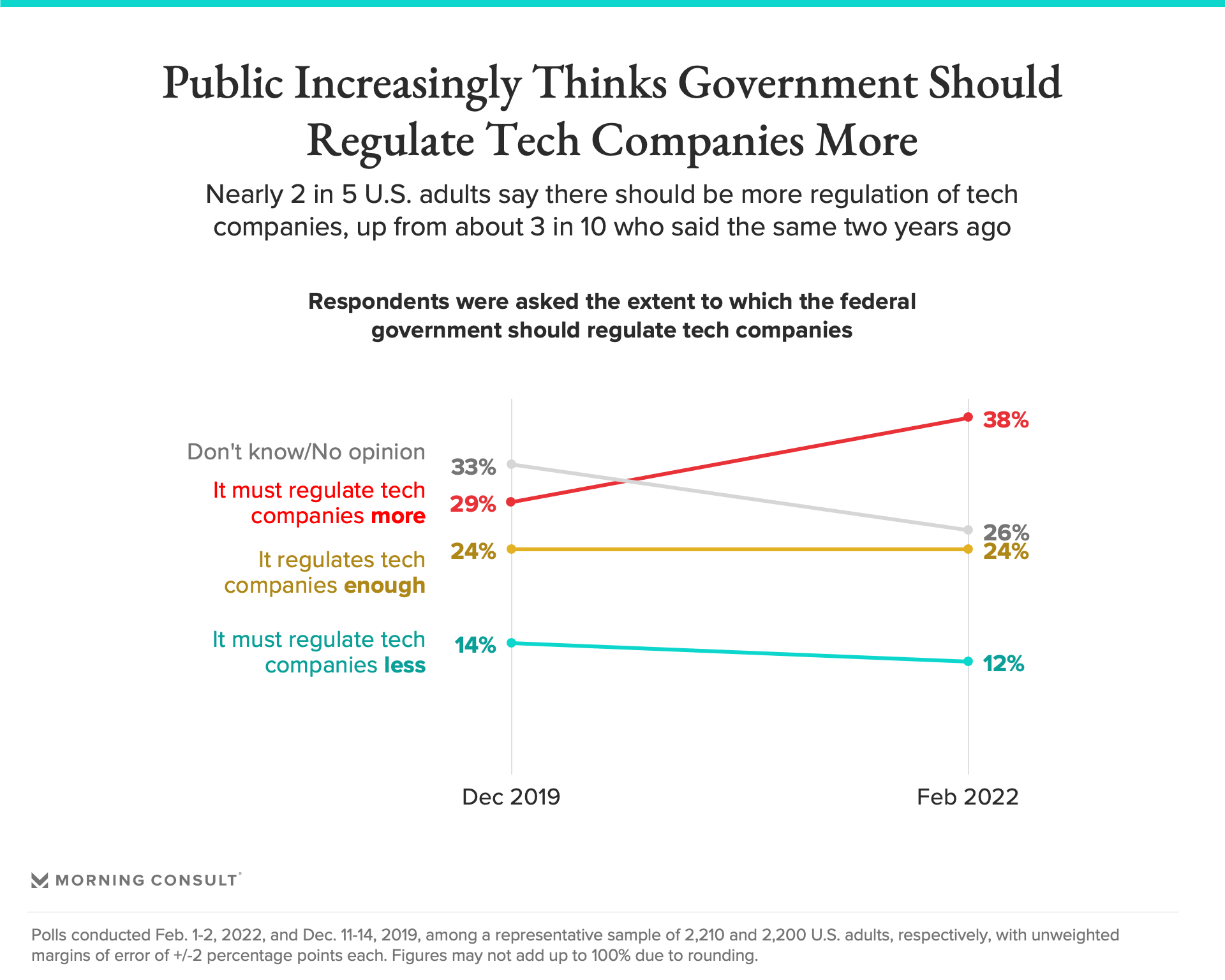 In addition to the various pieces of antitrust legislation advancing through Congress, the Federal Trade Commission is leading several investigations and lawsuits against tech companies to determine if they have undermined competition. But there is nearly a split in public opinion on whether antitrust reviews will work: 42 percent of adults said they believed the investigations will be effective, while 37 percent said they will be ineffective. 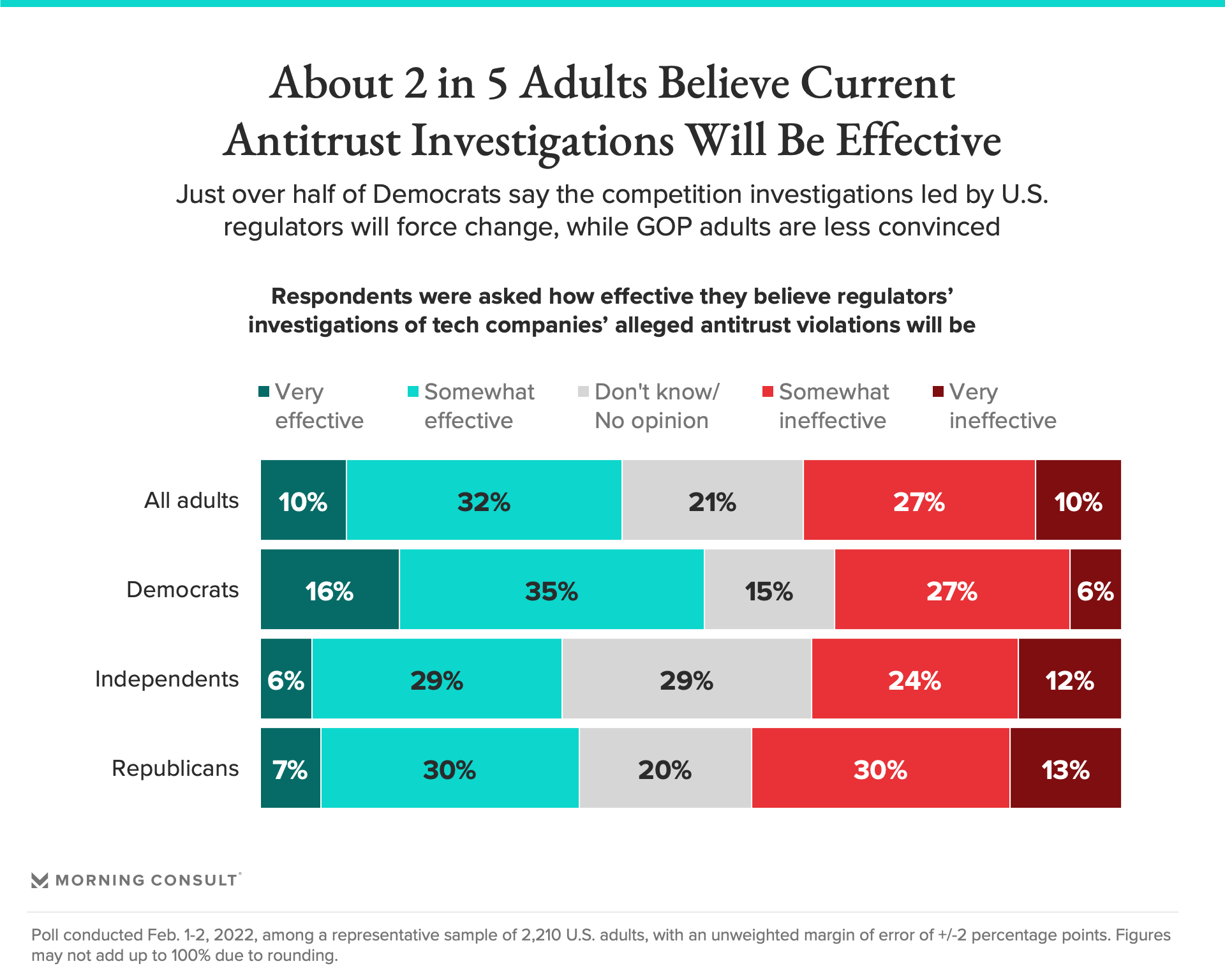 The FTC has come under fire from the Information Technology and Innovation Foundation, which released a report last month arguing that the agency’s efforts to pre-emptively stop what it believes are anti-competitive practices through rulemaking risk the stifling of innovation.

Aurelien Portuese, director of antitrust and innovation policy at ITIF, said while there should be some guardrails against anti-competitive practices, businesses must be allowed to be disruptive without fear of running afoul of regulators.

Spokespeople for Amazon and Meta did not respond to requests for comment. An Apple spokesperson declined to comment.

But while customers are uncomfortable with the concentration of power in a few tech companies’ hands, they still frequently partake in their offerings. Eighty-two percent said they use online services to communicate with friends and family at least weekly, while 70 percent said they use social media, mobile apps and e-commerce sites to keep up with current events and entertainment news at least weekly.

The convenience factor behind many of those offerings is crucial, respondents suggested. Sixty-nine percent said the convenience of e-commerce websites is a reason why they continue to shop online, while 83 percent agreed that internet tools such as web browsers and search engines make it easier to find what they are looking for online. Sixty-four percent said they look online first to see if a product they want is available.

And that convenience factor is reflected in some of the recent earnings performances by the largest tech companies, even as Meta said it expects to see slower growth. Amazon reported $137.4 billion in fourth-quarter revenue, an increase from $125.6 billion a year earlier, and profits of $14.3 billion as it had a strong showing during the holiday shopping period. Alphabet Inc. posted $75.33 billion in revenue in the fourth quarter, a 32 percent year-over-year increase, as it benefited from the growth in digital advertising as the economy started recovering from the pandemic.

Elsewhere, a recent Deloitte study commissioned by the Computer and Communications Industry Association found that 64 percent of consumers used a digital device during their latest retail store visit to compare products and prices online and in-person, while 55 percent of those who started their most recent shopping trips online made their final purchase in-store.

CCIA said a combination of online and in-person shopping — a so-called “omnichannel” approach — has prevented Amazon from totally dominating that space.

The report also found that 46 percent of consumers would pay more to pick up an item in-person five minutes from their home, rather than wait for two-day delivery.

“Consumers are very picky about getting the best price,” said Trevor Wagener, CCIA’s director of research and economics. “But if they can’t get convenient fulfillment, they are willing to say, ‘It may be cheaper if I have one option, but I’m not waiting a week to get my purchase — I really want it today.'”

The Morning Consult survey found that 72 percent of U.S. adults are worried about so-called mom-and-pop stores in their community, many of which have been negatively impacted by the growth of online retailers. Wagener said adaptation from those shops has included a “shift from the siloed approach” where stores used to separate their online and in-store divisions.

Despite Amazon’s dominance of retail raising the hackles of regulators, Wagener said that many consumers’ preference for omnichannel shopping may prevent it from being truly dominant.

“That’s not to say that purely online retailers don’t have a great role to play in the economy,” Wagener said. “But it is to say that retailers who have physical stores have an edge, they can integrate the online shopping experience, the best of online with the elements that you can’t perfectly replicate online.”

Portuese warned that regulators run the risk of making things less convenient for consumers through antitrust actions, so a careful balance must be struck to ensure they do not obstruct future innovation.

“I think it’s important we have the greatest amount of innovation, and not some rules that would somehow insulate sluggish rivals from disruptive competition,” he said.

Related: Most People Don’t Like Giving Big Tech More Power, but They Rely on Its Services
Tech Regulation