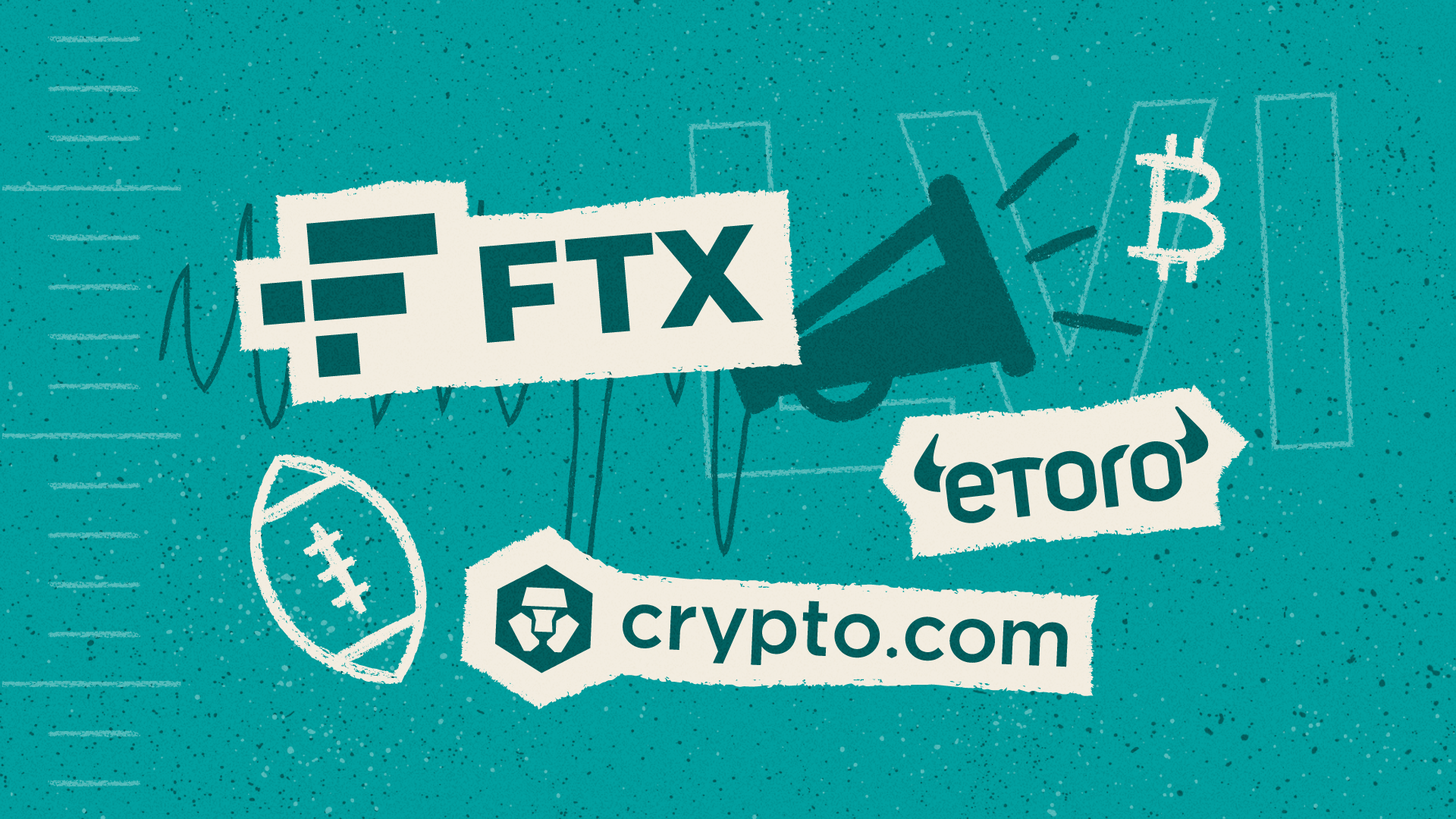 A quarter of likely Super Bowl viewers say they own some form of cryptocurrency. That could be good news for eToro as it enters the U.S. market. (Morning Consult artwork by Kelly Rice)
By Alex Silverman

Three companies in the cryptocurrency space have announced plans to run ads during Super Bowl LVI, a development that has many observers comparing this year’s game to the so-called Dot-Com Bowl of 2000.

Two of those exchanges — FTX Trading Ltd. and Crypto.com — have already made their presence felt in American sports through massive investments in high-profile sponsorship assets, including arena naming rights, uniform patches and event entitlements.

For Israel-based eToro, however, Sunday’s Super Bowl is “the first step in our journey” to build brand awareness in the United States, said chief marketing officer Nir Szmulewicz. It also marks the start of what he described as a $25 million global marketing campaign.

“We believe now is the right time,” Szmulewicz said, citing the company’s recent launch of an expanded offering in America that includes stocks and ETFs.

Founded in 2007 and available in more than 100 countries, eToro’s main point of differentiation from other trading platforms is its built-in social functionality. Users can see what their friends are buying and selling, exchange tips with other traders, see which investments are most popular and even copy the moves of an influential investor on the platform.

The Super Bowl offers brands in the crypto space a huge audience with which to build awareness — one that includes individuals more likely than the general population to engage with and ultimately invest in cryptocurrency.

Survey conducted Jan. 31, 2022, among a representative sample of 2,211 U.S. adults, with an unweighted margin of error of plus or minus 2 percentage points.

In a Jan. 31 survey conducted by Morning Consult, 44 percent of likely Super Bowl viewers said they are either “very” or “somewhat” familiar with cryptocurrency, compared with 38 percent of all adults and 26 percent of those who don’t plan to watch the game.

In terms of market fluctuation, however, the Super Bowl doesn’t come at the best time for crypto companies. The price of Bitcoin has plummeted in recent months after reaching an all-time high of nearly $69,000 in November. While the 33 percent of U.S. adults with a favorable opinion of cryptocurrency has remained virtually flat since a September survey, the share with an unfavorable opinion of the digital asset class increased from 21 percent to 31 percent in that time.

Ahead of the game, eToro released two teasers for its Super Bowl ad to build buzz for its big debut. While Szmulewicz was tight-lipped on details about the spot, he shared the message the brand wants to get across to viewers.

“We would like to showcase what our community of millions of investors looks like and how this community helps each other to grow people’s knowledge and trading skills,” he said.

Though the Super Bowl marks the company’s foray into the U.S. market, eToro is no stranger to sports marketing. The company has corporate partnerships with 25 soccer clubs across Europe, including teams in the English Premier League, Bundesliga and Serie A. Szmulewicz said that while the company doesn’t yet have plans to partner with U.S. sports properties, he suggested the company is considering options to do so in the future.