China Threads the Needle of a Financial Crisis, but Evergrande Woes Are Not in the Rearview Mirror Yet

As Xi smooths his path to a norm-shattering third term in office, swift government action has for now staved off an economic crisis in China, but it may have weakened efforts overseas 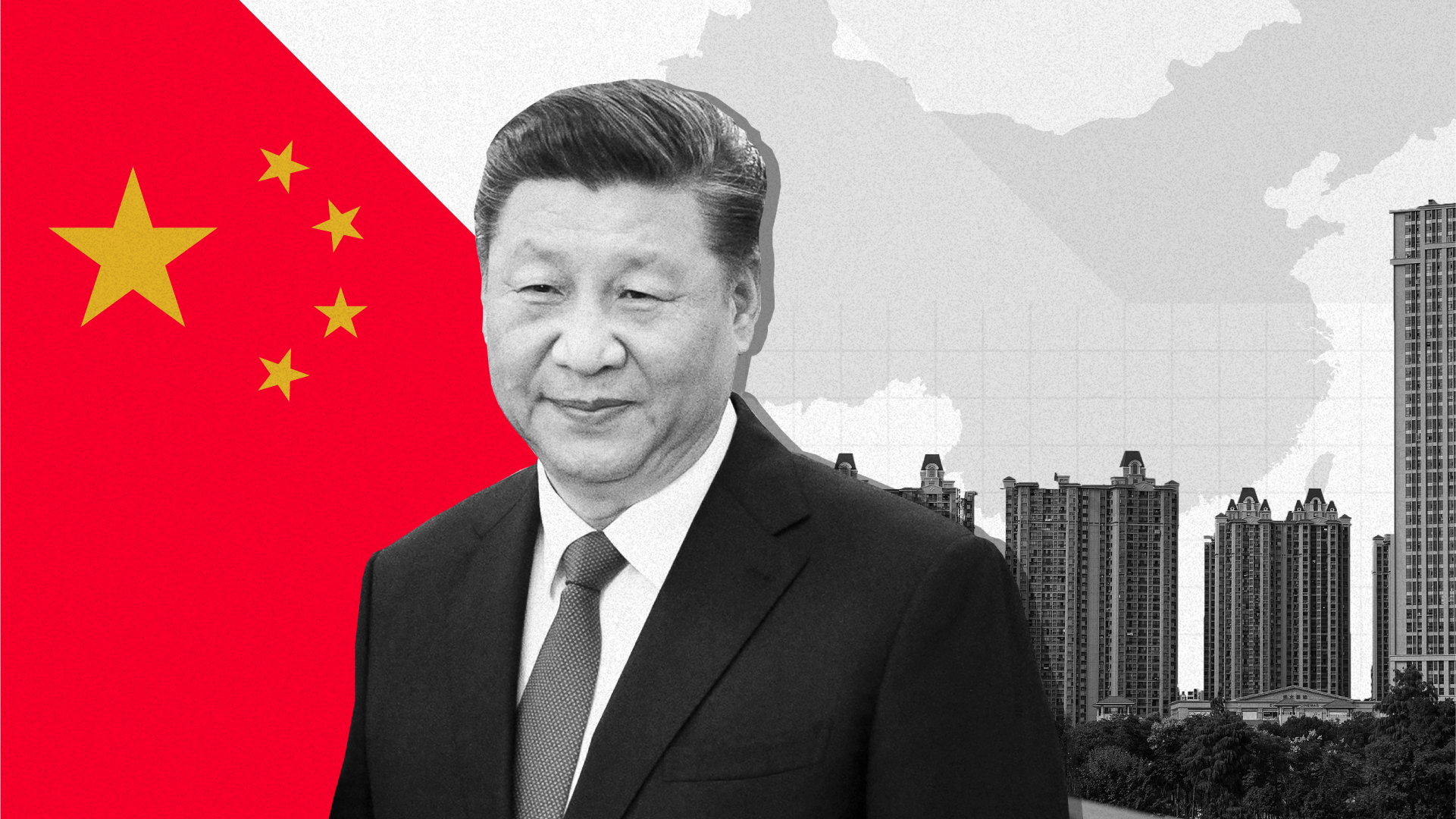 Chinese President Xi Jinping has been forced to navigate a heavily indebted property sector as he seeks a third term in office. (Getty Images / Morning Consult artwork by Monique Zarbaf)
By Matthew Kendrick

When Chinese property giant Evergrande failed to service bond obligations in December and went into “restricted default,” analysts worried that a wave of defaults could crash a hole through China’s economy if the property sector’s cash crunch could not be resolved.

That would have been bad news for President Xi Jinping, who has been gearing up for the confirmation of his norm-shattering third term in office at the 20th Communist Party Congress later this year, and authorities accordingly moved to increase liquidity and fix balance sheets in the property sector, thereby halting any financial contagion.

Morning Consult surveys show the precipitous slide in consumer confidence that followed the wave of bad news last year has now stabilized, even as house price expectations continue to fall. Beijing, meanwhile, looks set to continue a focus on social stability as the all-important party gathering approaches — even if it cuts into China’s efforts to build overseas influence.

In August 2020, China implemented its “Three Red Lines” policy, which limits how much credit developers can access based on their existing debt obligations, in an attempt to get a handle on the rampant urban real estate speculation that has made housing increasingly inaccessible for many Chinese adults and also put many property firms heavily in debt.

“There was a decision that debt was growing too fast, much of it driven by the housing sector, which was potentially destabilizing and not sustainable,” said Dexter Roberts, a senior fellow at the Atlantic Council’s Asia Security Initiative and author of “The Myth of Chinese Capitalism.” The global economic slowdown provided Beijing the necessary cover for a long-needed change, he said: “China recovered from COVID much faster than any other major economy in the world and Beijing figured it was a good time to tap on the brakes with credit.”

Yet the decision did not come without risk: An estimated 70 percent of Chinese household wealth was already tied up in real estate, and a sudden cash crunch in property would threaten the solvency of investments everywhere — just as in the United States a decade earlier. 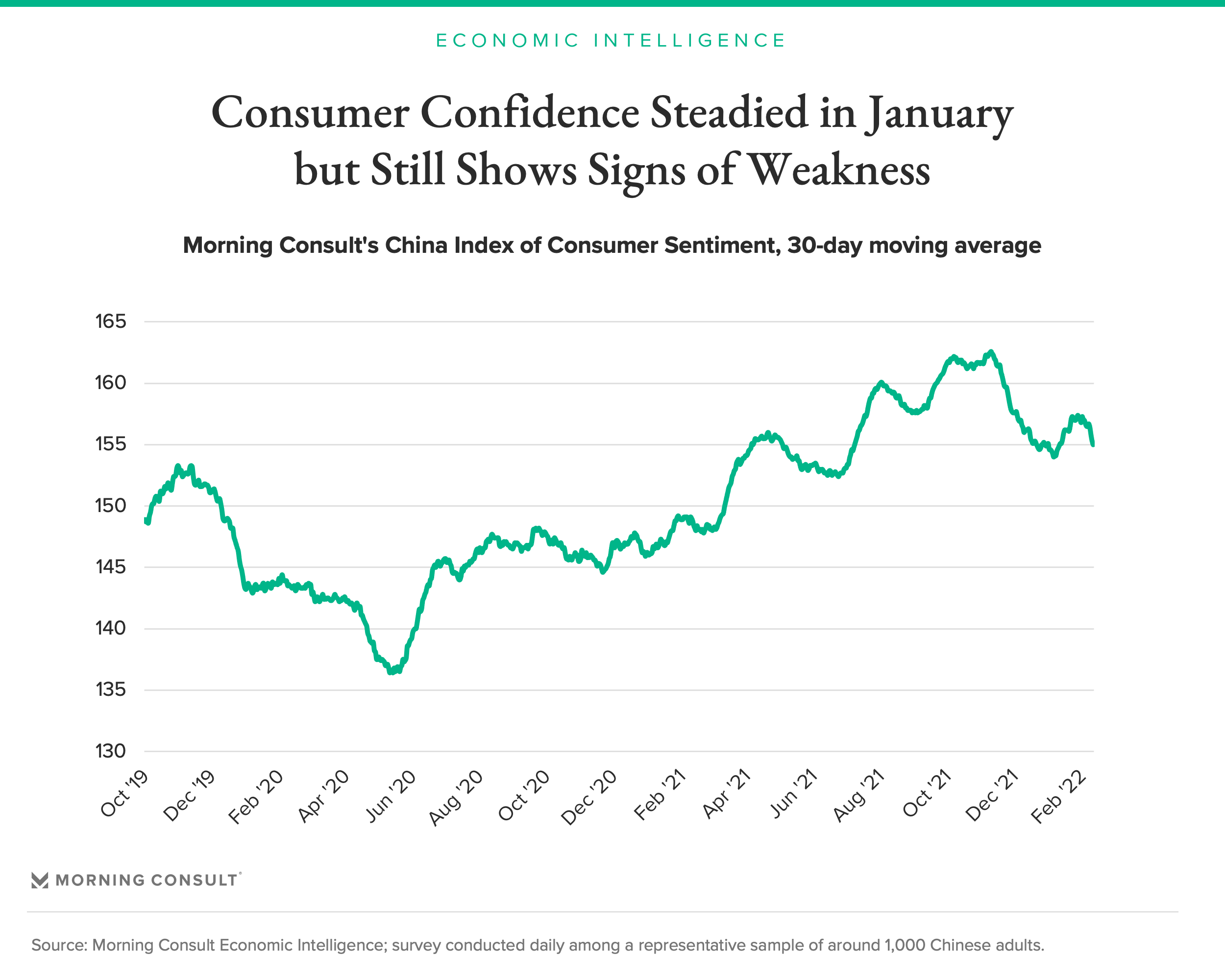 When news then broke that several of China’s largest real estate developers were struggling to meet their debt obligations in October, consumer confidence took a severe tumble, Morning Consult survey data shows. Investors worried a collapse in the property sector would exact a huge toll on many Chinese households and companies that planned for their increasing spending.

Interest rates were lowered to inject liquidity into the property markets and provincial officials stepped in to manage Evergrande, the most vulnerable firm whose $300 billion in debts and near bankruptcy made global headlines. Developers also shed overseas assets to increase their stock of cash and Beijing urged companies that specialize in managing bad assets to spread some of the pain onto their own balance sheets — even if they were unlikely to see a return.

They also enacted other tried-and-true methods to ensure solvency in the key sector.

“Sometimes when banks themselves know they have an asset that is not performing and would typically write it off, instead the central bank extends credit to roll over most of the debt,” said Morning Consult Economic Analyst Jesse Wheeler. “So no bank is writing off too many assets at any given time that could cause a panic or spread out through the sector.”

Significantly, the policies meant that no Chinese homebuyers were left in the lurch. That’s the inverse of what typically happens during a credit crunch, noted Weifeng Zhong, a senior research fellow at the Mercatus Center of George Mason University.

“Usually creditors are paid out first, then what’s left goes to the owners of the firm, but customers almost never get anything,” Zhong said. “In China, the first priority was regular folks trying to buy homes and authorities were fine with defaulting to overseas debtors. They’re willing to sacrifice certain economic principles to keep people happy.” 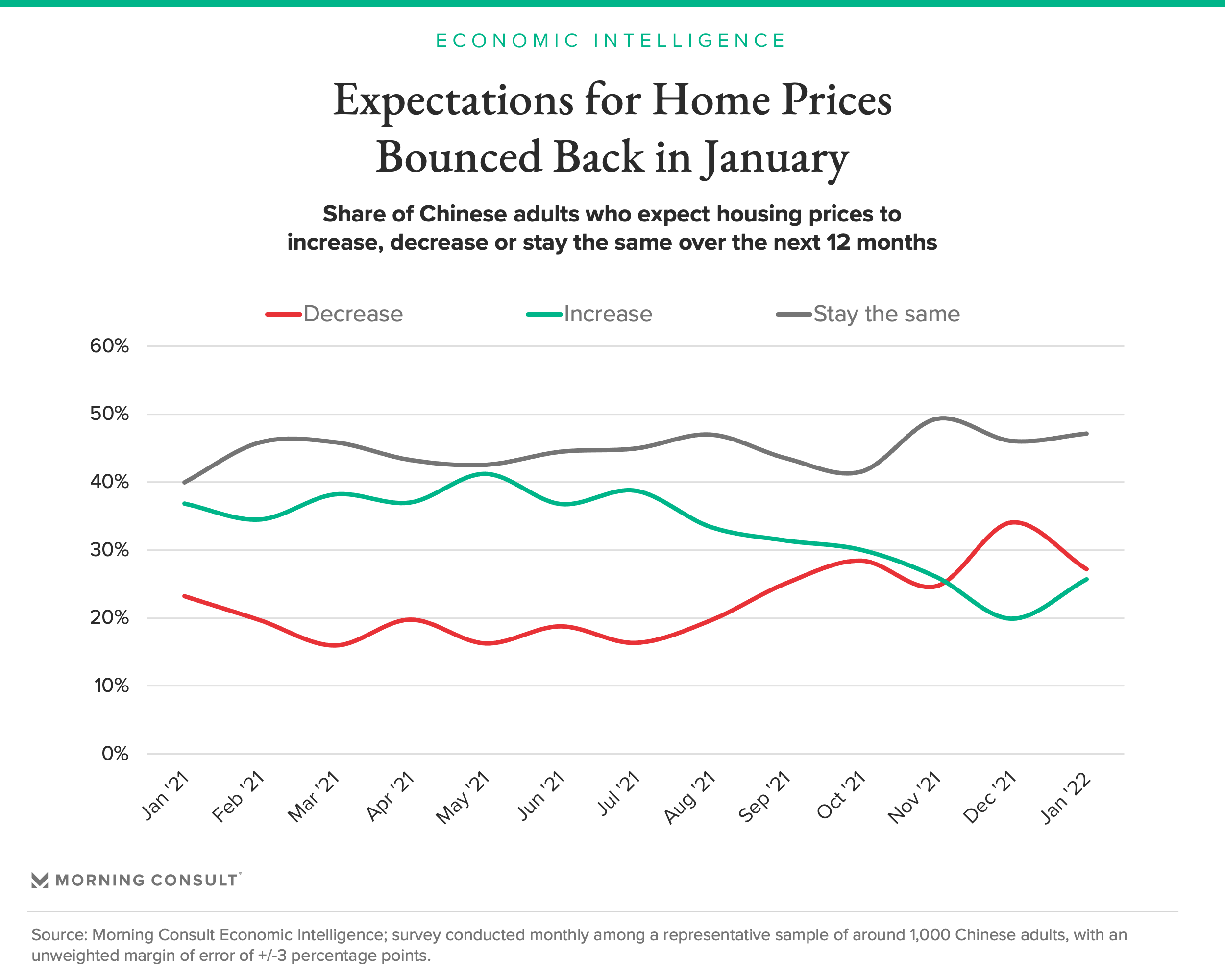 The moves seemed to reassure most Chinese homeowners that their financial situation was safe, and consumer confidence stabilized in December and January.

While the policy kicked the can down the road when it comes to weaning China’s economy off cheap credit, Beijing achieved the crucial goal of short-term stability, said Dimitar Gueorguiev, director of Chinese studies at Syracuse University.

Gueorguiev said the fiscal loosening was clearly aimed at “allaying widespread anxiety going into the Chinese New Year holiday and setting a more pragmatic tone for the upcoming legislative sessions,” which will lay the groundwork for the 20th Communist Party Congress, the premier event on Beijing’s political calendar this year.

The meeting is expected to confirm Xi for a third term as China’s paramount leader, elevating him to a rung the pantheon of modern Chinese leaders currently only occupied by Mao Zedong and Deng Xiaoping, the architect of the reform era. That makes the present an inopportune time for protests in front of real estate offices like those that took place last month.

Zhong runs the Policy Change Index, which uses machine-learning technology to scrape through headlines from state-owned media in China to detect upcoming changes in Beijing’s policies. He said their soon-to-be-published analysis of the fourth quarter of 2021 showed very little recent policy change, reflecting a focus on stability and continuity from the Chinese government.

Still, just because the worst possible version of the Evergrande crisis may have been averted, that also doesn’t mean there aren’t storm clouds on the horizon after Xi’s third coronation. In particular, the inequality that accompanied China’s rapid growth has become harder to play down, which has driven Xi Jinping to lay out goals for “common prosperity.”

“Xi has pledged to equalize social welfare across the country, and Beijing wants to spend a lot more money raising the quality of services so that rural people can have similar access to health, health education and retirement benefits,” Roberts said.

The problem? China’s social welfare programs have typically been run through the lower echelons of government, who fund the programs through land sales and leases to private developers. And they are now in no position to keep buying.

China’s fiscal loosening also comes at a time when inflation hawks in the United State seem to be increasingly dominating the conversation in Washington. One Federal Reserve member, for instance, recently said he would like to see a full percentage-point rate hike by mid-year.

Xi, on the other hand, used his address at the World Economic Forum’s digital substitute for the postponed Davos Summit to urge world leaders to continue with growth-oriented policies — and some major players look like they might agree. Japan’s central bank announced it was planning to keep rates near zero, while European Central Bank President Christine LaGarde said her officials will only gradually remove stimulus from the eurozone.

Gueorguiev said it was clear why Xi might be so eager to keep central banks lending even as the property sector’s debt situation still looms large: tight monetary policy could put a damper on China’s geopolitical projects.

“In the short term at least, I think China is still in an ‘all hands on deck’ mode and we are likely to see overseas investment and Belt & Road Initiative activity continue to subside,” he said.