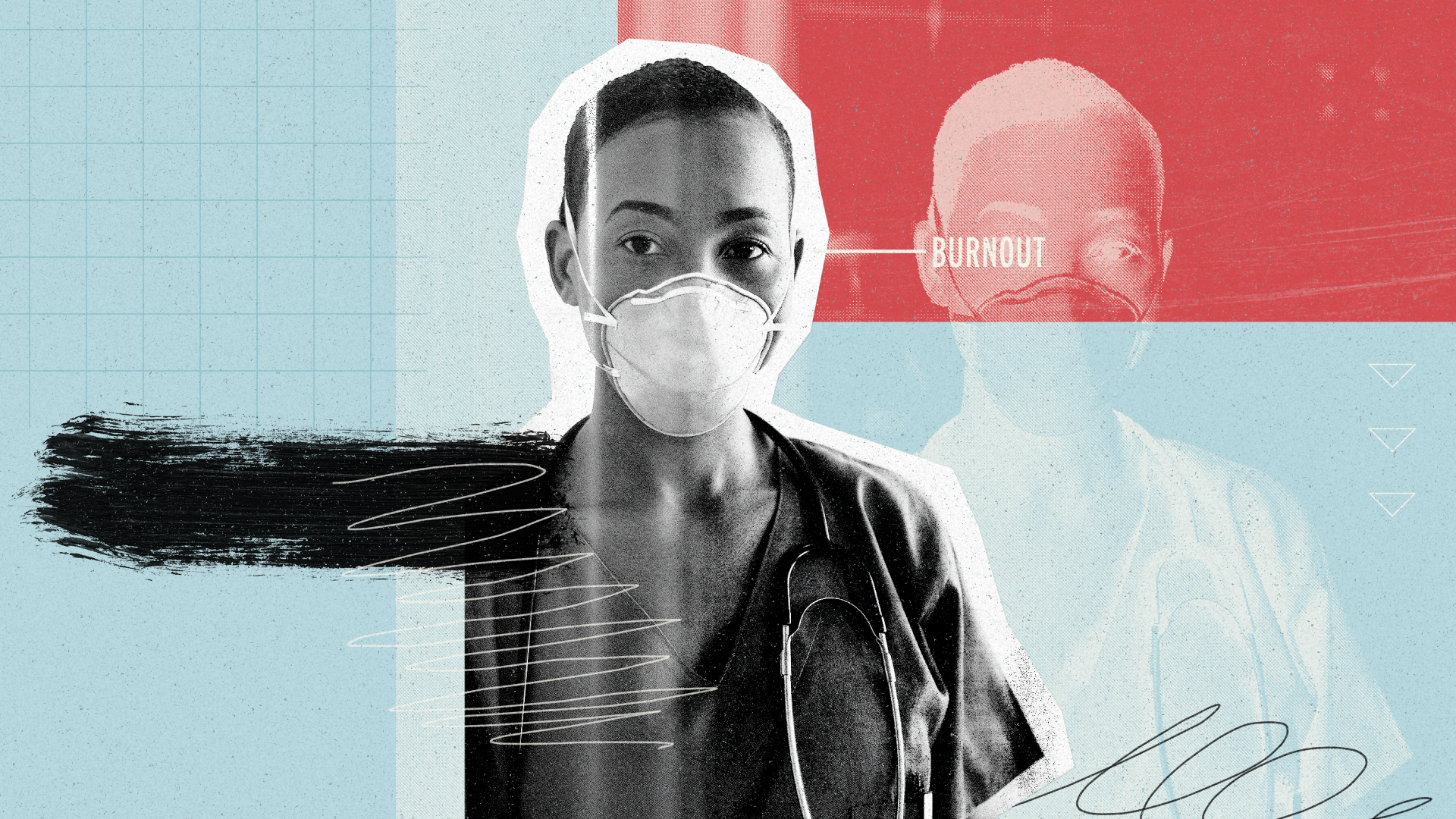 VOICES FROM THE FRONT LINES OF HEALTH CARE: PART III

A new special report from Morning Consult and Axios explores how health care workers view the pandemic response and how COVID-19 has impacted their professional futures. The data is drawn from a survey of 1,000 health care workers and is a follow-up to October 2021 and January 2021 reports.

While the pandemic’s latest wave may be waning, the health care sector’s staffing crisis is as urgent as ever.

A new Morning Consult/Axios survey indicates half of health care workers have felt defeated by the demands of their jobs during the pandemic, while another 30 percent have struggled to cope with work stressors over the past six months. The findings come as policymakers and health care executives scramble to stem the bleeding while they eye longer-term initiatives to revitalize the medical workforce.

“We’re stressed and stretched,” said Mitchel Rothholz, a pharmacist and chief of governance and state affiliates at the American Pharmacists Association Foundation. Pharmacy teams are short-staffed, with workers calling out sick or caring for family members, while “the phones are ringing off the hook.”

Health care hiring ticked up overall in January, but not all facilities are in the same boat: Some have been pushed into financial distress as nurses and staffers flee, while others are raking in record profits. The White House sent military medical personnel to help beleaguered hospitals during the omicron surge, while providers that can afford to pay travel nurses — whose wages can be substantially higher than staff nurses — are doing so, prompting the hospital lobby to push lawmakers to investigate travel staffing agencies on claims of price gouging. 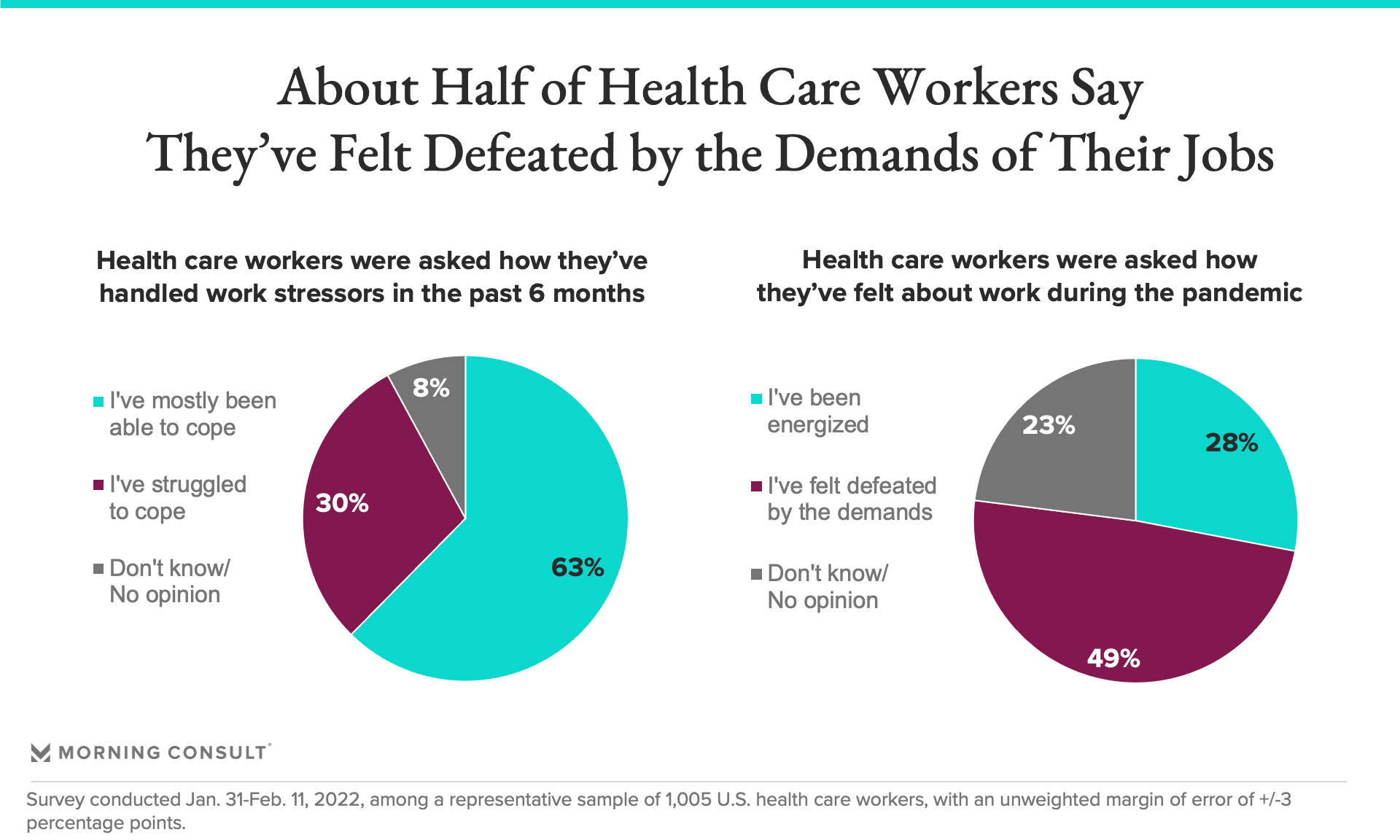 Meanwhile, mental health support for clinicians has become a focal point, prompting congressional hearings, federal legislation and millions of dollars in grants designed to address the “relentless physical and emotional demands the health care workforce has faced,” according to a spokesperson for the Health Resources and Services Administration, which administers the funding.

That toll is severe. Roughly 1 in 2 health care workers said their mental health has worsened during the pandemic, the survey found, on par with previous findings in September and January of last year. Three in 4 said their work has made them tired since COVID-19 emerged two years ago, while 3 in 5 said they’ve been anxious.

“This is not a heartiness issue,” said Dr. Nigel Girgrah, chief wellness officer at Ochsner Health System in Louisiana, which just received a $2.9 million HRSA grant. “This isn’t a lack of resilience. This is a systems issue.”

Yet for all of the public acknowledgement of the issue, the survey suggests many health care workers haven’t received much tangible support from their employers during the pandemic. Roughly 2 in 5 health care workers, for example, said that a raise had helped keep them happy at work, but another 29 percent said they hadn’t been offered one. They were twice as likely to say caregiver support was effective than ineffective at keeping them content — but more than half said their employer didn’t offer such aid at all.

“Money is nice, but money is not the solution,” Rothholz said. “It’s giving team members the time.”

For some, time off has been hard to come by. About 3 in 10 health care workers said their work hours have increased over the past six months, while 4 in 5 said the national shortage of medical staff has affected them and their place of work. 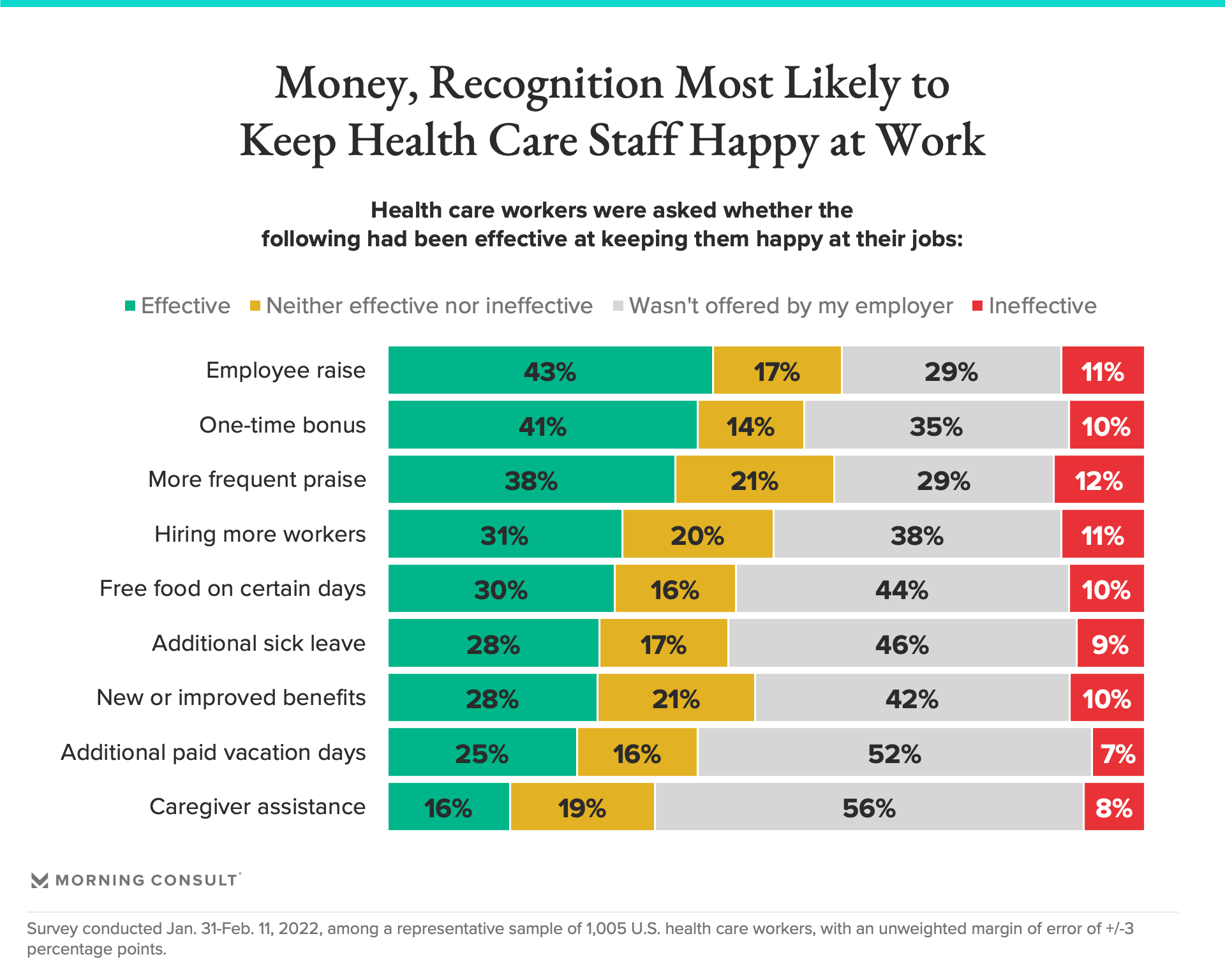 That’s because the shortages create a sort of domino effect across the health care system, even if a particular facility is in good shape. Physical therapists, for example, are now seeing a deluge of patients who delayed elective surgeries earlier in the pandemic. And if nursing homes don’t have enough staff, hospitalized patients may be stuck in limbo while they wait for a bed to open up.

“People are, in some cases, spending more time within the four walls of a hospital as opposed to these other episodes of care, which are probably better suited for their needs, but they’re not staffed,” said Andy Brailo, chief customer officer at Premier Inc., which handles supply chains for hospitals.

It’s not just the direct care workforce that’s being squeezed, Brailo noted, with hospital custodians and other support staff also in short supply: “If you can’t clean the room, if you can’t feed meals to the patients, that is arguably just as challenging for the community to deal with as it is for the nurses.”

All of these issues have pushed medical personnel to weigh their options. In the survey, health care workers become slightly more likely to say they’re considering leaving the industry over time — from 15 percent before July 2021 to 20 percent this month. And 3 in 4 said they’re “ready for change.” 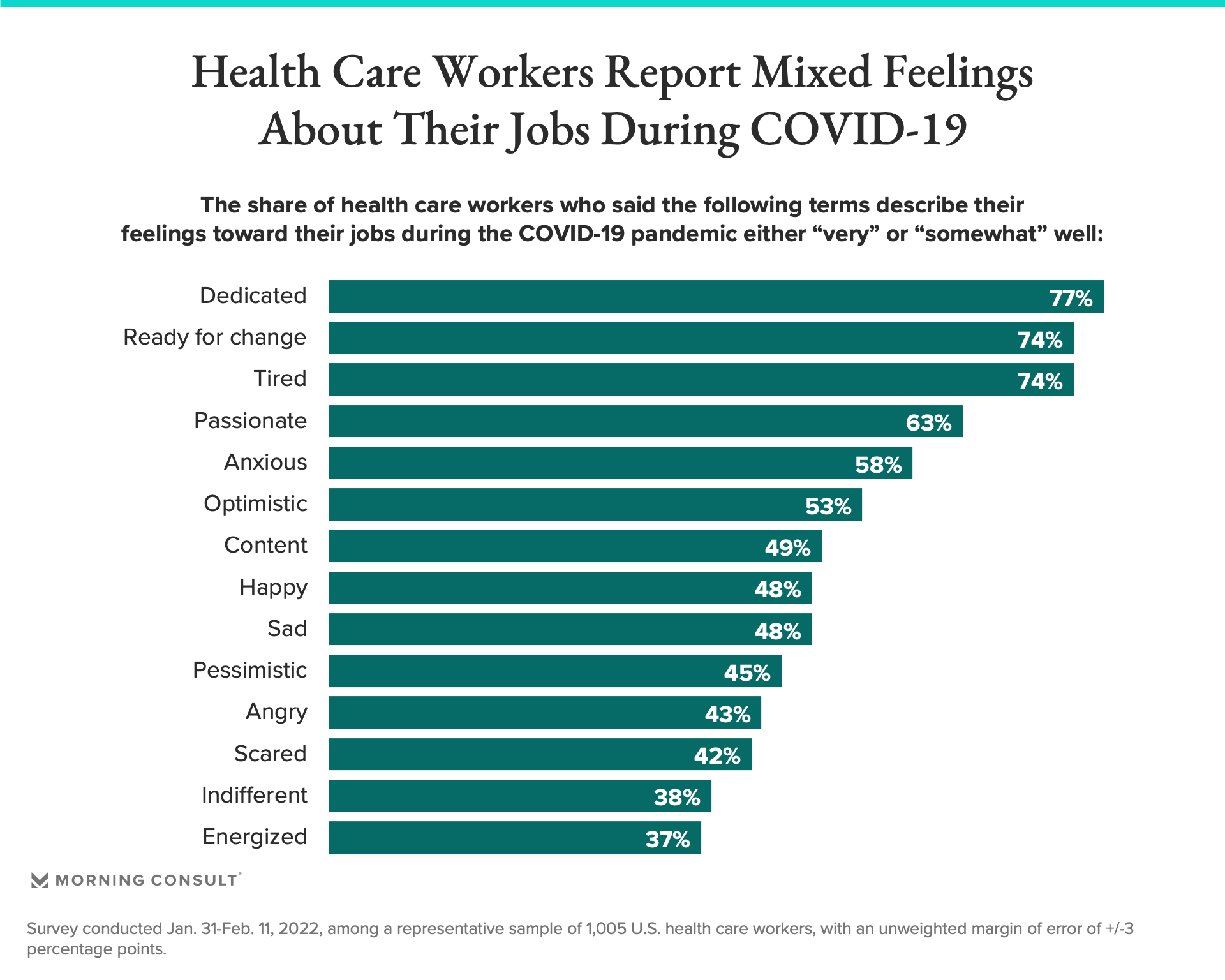 Escalating violence against clinicians is one of the major changes in the past few months, said Dr. Gillian Schmitz, an emergency room doctor in Texas and president of the American College of Emergency Physicians. The violence is “impacting staffing and morale, where people are just saying, ‘This is just not worth it anymore.’”

Meanwhile, a smaller sample of health care workers who have quit or been laid off during the pandemic cited issues like burnout, being overworked and finding better opportunities, benefits or pay elsewhere as reasons they left their jobs.

Brailo said it could be three to five years before the workforce fully recovers from the pandemic, and some facilities are already working on ways to help. In Louisiana, Girgrah said Ochsner is aiming to provide “more upstream offerings” that allow workers to “opt-out rather than opt-in” so that the onus isn’t on them to seek support.

The programming aims to decrease turnover, improve staff mental health and curb the amount of time clinicians spend catching up on administrative work after-hours, Girgrah said. HRSA will also convene Ochsner and nine other grantees to share findings and figure out what works and what doesn’t to support their staffers.