The Culture War Has Democrats Facing Electoral Demise in Rural America. Can They Stop the Bleeding? 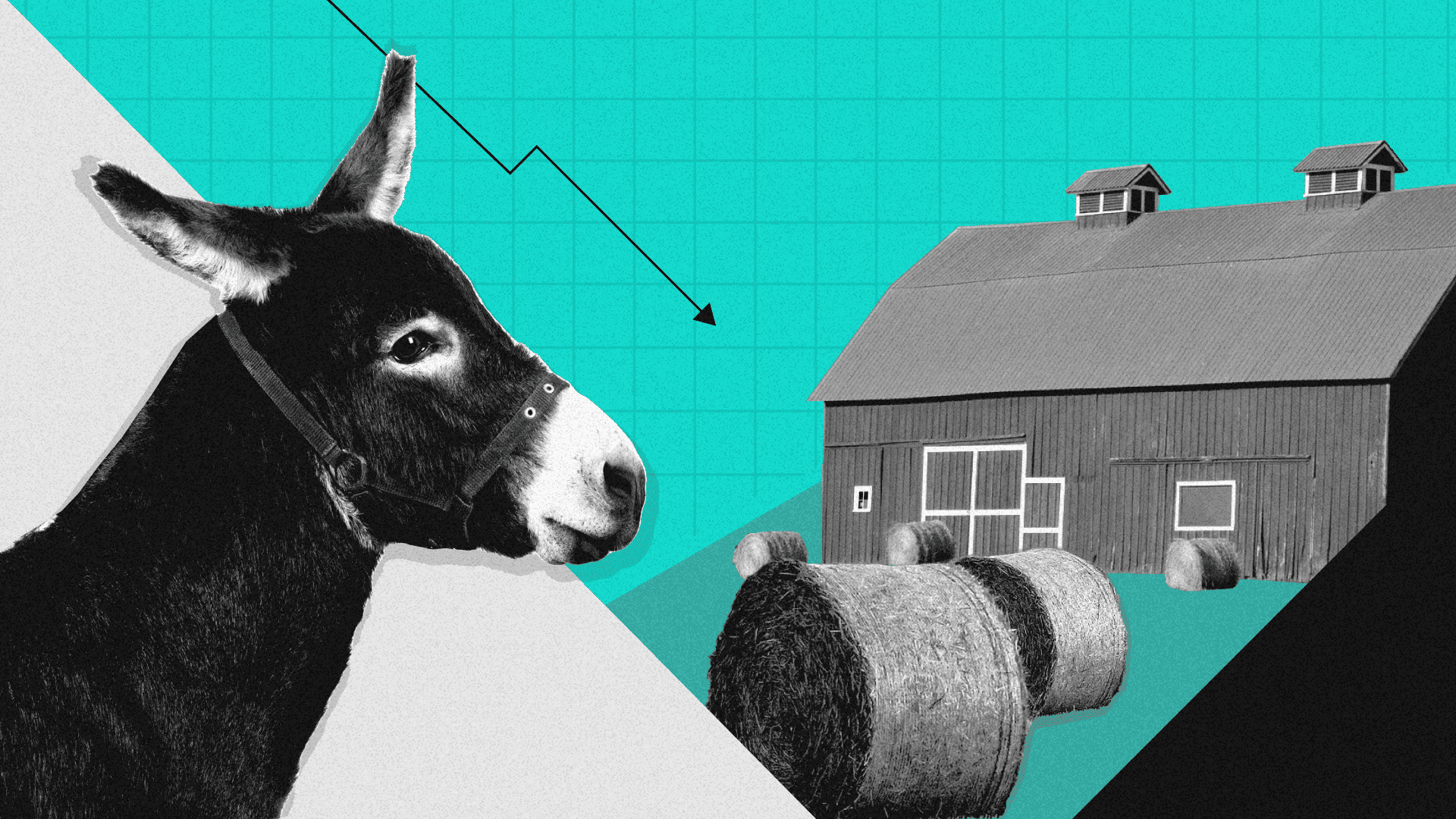 But Democrats may no longer be able to rely on the suburbs given President Joe Biden’s mounting struggles that threaten to again highlight his party’s weaknesses in rural communities, where new Morning Consult research reveals culture-driven displeasure with the party in power. Some prominent Democrats believe an immediate course correction is required for the party to avoid perhaps decades in the political wilderness.

“The root issue is that rural voters are worth more in both the Senate and the Electoral College,” said Democratic data scientist David Shor, a 2012 campaign guru for President Barack Obama who has spent years warning his party that it faces extinction in the country’s more remote areas. “Either Democrats make these adjustments and do better with working-class voters, or they get locked out of the federal government for a very long time.”

What drives rural opinions about Democrats

In search of a deeper understanding of sentiment about the Democratic Party in these communities, Morning Consult on Jan. 14-16 surveyed 1,525 self-identified rural voters — who today are largely working-class and white — on themes of policy, culture and race.

More than two-thirds of these voters view the Democratic Party unfavorably — including 48 percent who hold a “very unfavorable” view. Voters in rural communities skew Republican, but are not exclusively so, while rural Democrats and independents are slightly more likely than their counterparts in the overall electorate to hold dim views of the party now in power. 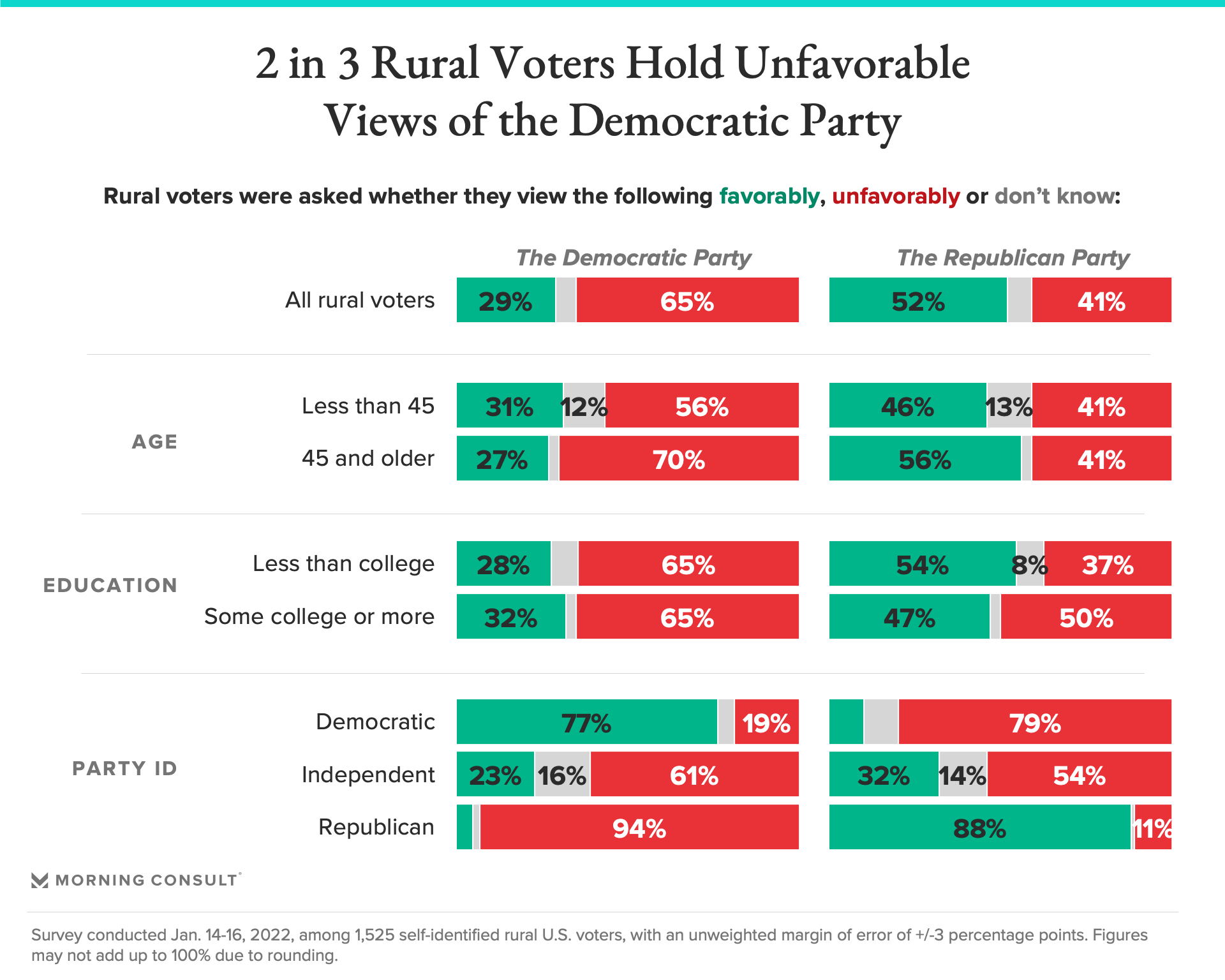 The survey also gave voters a range of political stances to choose from, effectively asking which positions held by congressional candidates are most important to earn their vote. Using these responses, Morning Consult conducted a driver analysis, which gauged the relationship between a rural voter’s prioritization of a given issue versus their favorability of the Democratic Party.

The findings show that candidate positions on cultural matters play an outsize role in forming perceptions of Democrats: Among 21 issues tested, a rural voter’s desire for candidates to support securing the U.S.-Mexico border had the strongest correlation with negative views about the Democratic Party, followed by Christian values, support for the police and increasing military spending. 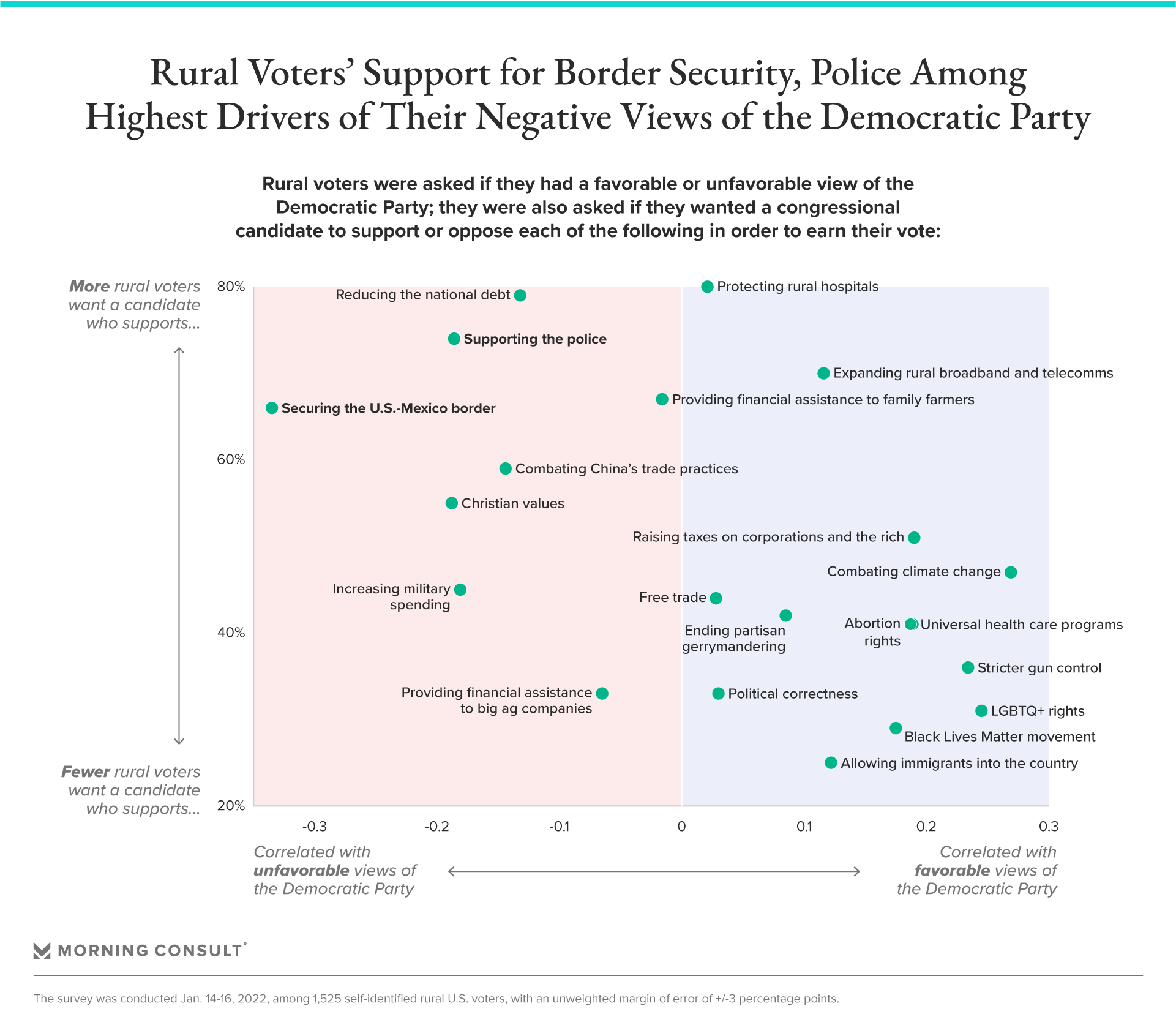 Former Montana Gov. Steve Bullock, a Democrat who was re-elected in 2016 when Trump carried the state by 16 percentage points, said his party has a decent policy pitch to make to the voters in rural America.

Taking the immigration issue as an example, Bullock said Biden’s “main” policy on the country’s Southern border — pandemic-related migrant expulsions — should appeal to those who prioritize border security, as it has in many ways continued the Trump administration’s approach rather than broken from it.

“Unfortunately, what people are hearing is the chyron,” he said, riffing on the salience of Republican messaging that frames Democrats as police-defunding anarchists and emanates through rural communities via conservative news channels.

That’s not to say a policy focus is a panacea for what ails the party outside the country’s more densely populated areas. Things like providing assistance to family farmers, an issue on which Republicans have worked to demonize Democrats, and protecting rural hospitals, which Democrats have tried to leverage in their push for the Affordable Care Act’s expansion of Medicaid, are also of high importance for voters in rural communities.

But that doesn’t translate into popularity gains for the Democratic Party.

The analysis found Democrats are more likely to yield positive ground by highlighting their support for expanding broadband and telecoms access in rural communities, raising taxes on corporations and the rich or even combating climate change. Bullock, who lost a 2020 Senate contest in Montana despite outperforming Biden’s vote margin in the state, said Democrats were losing the messaging war on these issues of relative strength.

“Look, we’re outdoors folks, we know we have to address climate change,” he said. “That doesn’t mean every Democrat in rural areas says the ‘Green New Deal,’ an aspirational document, is the way to go.”

The survey data shows that one set of obstacles to changing the messaging framework are the issues of race, ethnicity and identity. All are focal points for Democrats on the national stage as they champion policies meant to appeal to their diverse coalition, but which also clash with pro-police and anti-immigrant policies important for many rural voters.

If sympathy is rooted in association as previous surveys suggest, rural voters’ policy and ideological perceptions may come from the fact that they’re less likely than the average voter to live alongside nonwhite people — or even people who disagree with them politically.

Voters were asked if there were any of the following people living in their neighborhood:

But even with that change, increasing educational polarization still exists alongside unease from older and whiter populations, which together help form the foundation for some of these anti-immigrant and anti-urban views. 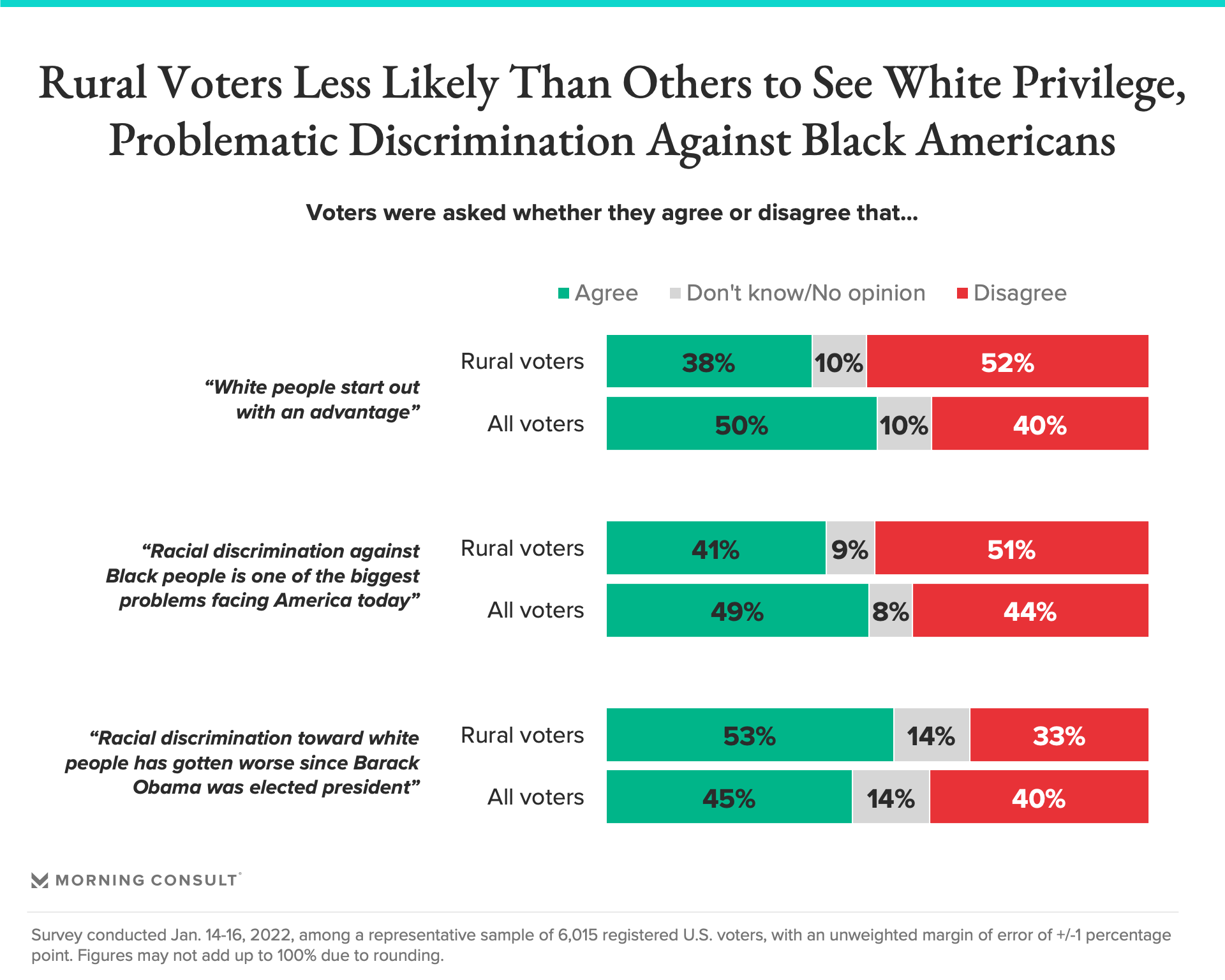 The average rural voter is more likely than the average voter to say racial discrimination toward white people has gotten worse since Obama’s 2008 election. Rural voters are also less likely than the average American to agree that racial discrimination against Black people is one of the biggest problems facing America today, or that white people start out with an advantage — key pieces of conversations in the United States about privilege that the GOP has used to fan the culture wars about things like “critical race theory” in schools.

María Teresa Kumar, CEO of Voto Latino, which works to expand Hispanic voter registration, said these views have hardened — from the tea-party wave to the rise of Trump — due to a lack of leadership from Democrats to level with the American people about the changing country.

“There has to be a way to explain the Democratic Party and the richness,” she said. “In the vacuum of not having enough leadership, people are piping in, disproportionately, Fox News every single day, they’re going on Facebook, and their feelings of being concerned about a changing country are being reinforced.”

Shor said despite the fact that he and many in his party might find these views on race, ethnicity and identity to be abhorrent, Democrats shouldn’t write off working-class white people, in the same way they haven’t shunned the Black, Hispanic or educated suburbanites who have been shown respectively to be more likely to diverge from party orthodoxy on issues like LGBTQ+ rights, policing and raising taxes on the rich.

“I don’t think it is coherent for us to say these peoples’ views are too repugnant for us to try to win their votes,” he said. “Politics is a game of trying to entice people to join your coalition — the way that you do that is by speaking in language they can understand, and by offering them something meaningful.”

What Democrats can change

From her current perch in Kansas, Mosley said one of the biggest challenges facing her party is awareness that they exist in rural communities, citing the “wall” between Democrats and rural voters.

“A lot of times the wall is just not wanting to be different in the community, where it’s very small and everyone knows everyone, and there’s a lot of things that get said about Democrats that aren’t true,” she said. “If you don’t interact with someone you know who’s a Democrat, we just seem like the bogeyman.”

Indeed, rural voters are more likely than the average voter to view the Democratic Party as too liberal (55 percent to 47 percent) and as out of touch with their community’s needs (62 percent to 53 percent). Less than a quarter of rural voters agree with the statement that the Democratic Party “cares more about my community,” compared with 2 in 5 who say the same of the Republican Party.

How Rural Voters View the Democratic and Republican Parties

Rural voters were asked which party they think…

Shor said the Democrats’ key to turning around their losses in rural communities is authenticity — rather than choosing “a pastor who shoots guns” to run in elections or putting the right policy positions on campaign websites — as well as using language about hard work and families that voters can understand to curtail the cultural divisions.

Shor has taken flak from the left for preaching so-called popularism, but views the task for Democrats as simple to understand but not easy to execute: Change the issue emphasis to improve their standing in working-class communities and minimize reliance on a white, hyper-educated segment of the population.

But some Democrats see it differently.

Kumar of Voto Latino said increasing diversity in rural areas has the potential to shift political power as young first-generation nonwhite Americans reach voting age and look for the Democratic Party that “claims to be” with them to prove it.

She said the party would be wrong to try to minimize its views on issues such as immigration in order not to scare older white voters, rather than engaging with them earnestly.

“We absolutely need rural America, but we also need to make sure that we are not backing away from the hard issues,” she said. “Instead of having frank conversations, the Democrats don’t want to touch it as if this and other things will go away, and it’s being filled by the demagogues that’s shaping the narrative every day.”