Germans Warm to Sanctions Against Russia, Leaving the Faltering French in Their Wake

As France readies for presidential elections in April, its population stands out in the Western alliance for its softer views about Russian aggression 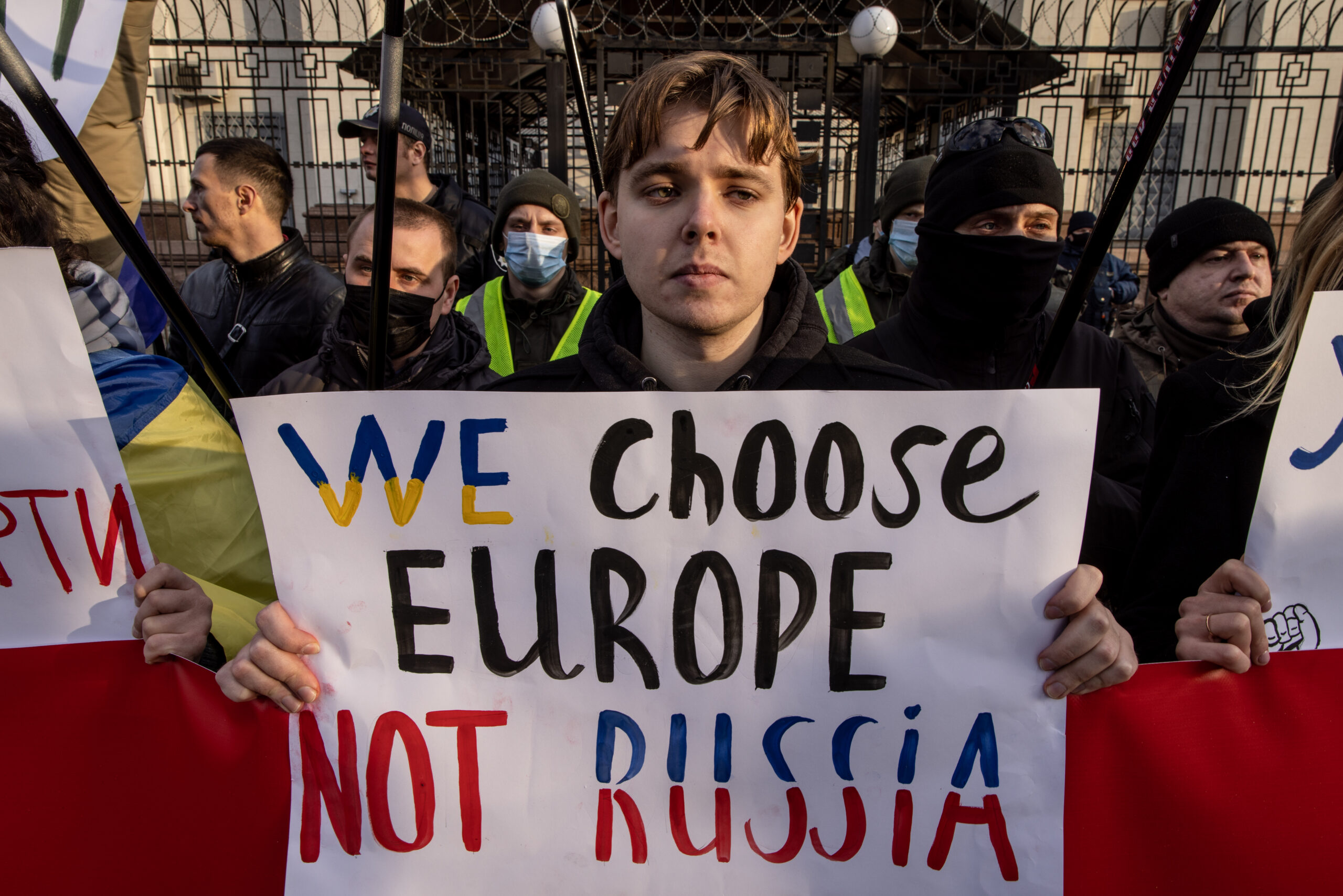 A Ukrainian protester holds up a sign during a demonstration in Kyiv on Feb. 22, 2022, against Russian plans to deploy troops in the country's rebel-held east. (Chris McGrath/Getty Images)
By Matthew Kendrick

German Chancellor Olaf Scholz allayed fears he would be NATO’s weak link in its response to Russian aggression in Ukraine by swiftly suspending the Nord Stream 2 gas pipeline after Moscow recognized the independence of eastern Ukrainian regions and ordered troops in as “peacekeepers.” But new surveys from Morning Consult show France may be where support for the West’s approach is softest in the transatlantic alliance.

France is the only country where a majority of adults do not disapprove of Russia’s approach to the Ukraine crisis and also the least likely to approve of sanctions on Moscow in response to an invasion of Ukraine, according to Feb. 17-18 surveys of adults in six major NATO countries: Canada, France, Germany, Italy, Spain and the United Kingdom.

Earlier this week, the United States and its allies in Europe and across the world imposed sanctions on Russian banks and oligarchs as well as investments in the rebel-held eastern Ukrainian regions that Russian President Vladimir Putin unilaterally recognized as independent, in what Western leaders described as the beginning of a larger invasion of Ukraine. 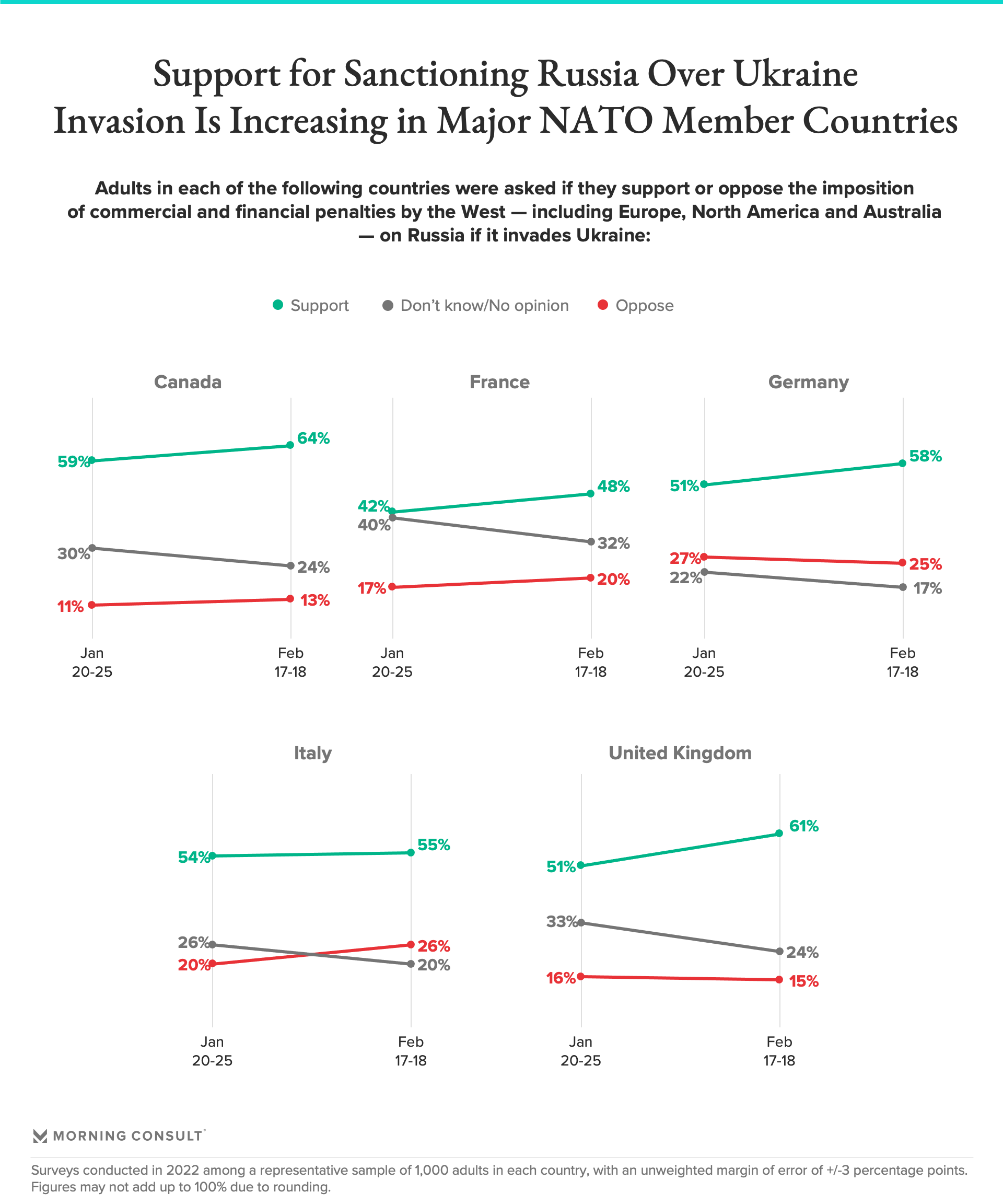 A comparison of the latest Morning Consult survey data to responses gathered Jan. 20-25 shows people in NATO countries have increasingly formed opinions about what should be done in Ukraine, with most coming out in favor of sanctions — but not Italy, which gets roughly 40 percent of its natural gas from Russia, and where opposition rose more.

In Germany, which has the most extensive economic ties to Russia among countries surveyed and houses the exit point of the Nord Stream 2 gas pipeline, support for sanctions rose 7 percentage points since January, to 58 percent. Crucially, support for Nord Stream 2 cancellation went up 5 points to 42 percent, while opposition stayed flat. That shift may have contributed to Scholz’s decision to halt certification of the new pipeline, allaying fears that a German energy reliance on Moscow would fracture the Western united front on the issue where it has most leverage.

To each their own

The French public now stands alone in its hesitation to back NATO’s preferred approach to dealing with Putin’s invasion plans.

Respondents were asked if they approved of how each of the following are handling negotiations over a potential Russian invasion of Ukraine:

Surveys conducted Feb. 17-18, 2022, among a representative sample of 1,000 adults in each country, with an unweighted margin of error of +/-3 percentage points. Figures may not add up to 100% due to rounding.

French adults are the least likely to approve of both the United States’ and NATO’s handling of the Ukraine crisis, and are the only country surveyed where less than half of adults disapprove of Russia’s approach. But the French are not alone in their skepticism of the United States, with adults in each NATO ally back their own government’s approach over America’s, usually by a sizable margin.

The French attitude might be most easily explained by the fact they are also the most sangfroid about a Russian invasion of Ukraine: Although 57 percent are at least “somewhat concerned” about it, supermajorities in other countries share that view. Nearly a third of French, meanwhile, report being unconcerned, the highest of any of the populations surveyed.

The French Are Less Concerned About a Russian Invasion of Ukraine

Surveys conducted Feb. 17-18, 2022, among a representative sample of 1,000 adults in each country, with an unweighted margin of error of +/-3 percentage points. Figures may not add up to 100% due to rounding.

Still, the prospect of bloodshed in Ukraine has many observers concerned about a massive refugee crisis. American troops in Poland are already preparing to assist evacuees from Ukraine, and the European Commissioner for Home Affairs Ylva Johansson said Brussels is preparing to accommodate large numbers of arriving refugees. The United Nations has asked for $190 million in pledges to support people displaced by a war.

A worsening of the Ukraine crisis would come at a heady time in France, with Emmanuel Macron hoping to become the first French president in 20 years to be elected to a second term in this April’s presidential elections. A refugee crisis in Europe could lend some weight to the messaging of his right-wing challengers, and help them win over voters from the center. Yet the topic of migration in France is deeply conflated with Islam and arrivals from France’s former colonial empire in Africa, and it’s not clear how a homegrown European refugee crisis sparked by a military invasion would map onto the French right’s anti-immigrant discourse.