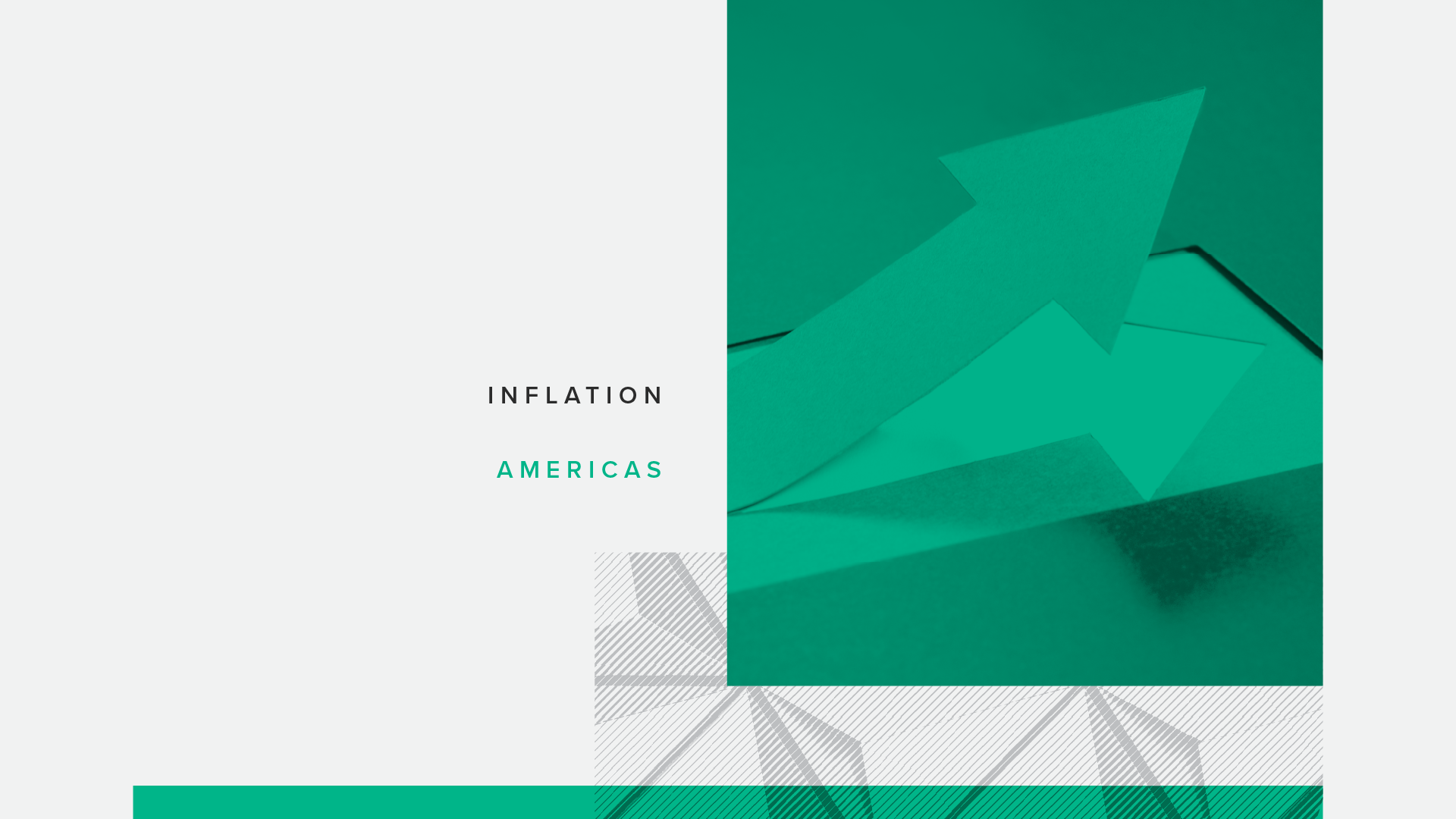 Despite a strong U.S. labor market, wages are failing to keep pace with price growth, and consumers are subsequently facing increasingly narrow margins in monthly budgets. To evaluate how inflation is impacting consumer demand, U.S. adults were asked in February how prices are influencing their purchasing decisions. The results, part of a recurring monthly survey on supply chains, indicate that elevated inflation was already weighing on household budgets prior to Russia’s invasion of Ukraine, meaning further price increases as a result of geopolitical disruptions could worsen the trajectory of spending growth in the United States.

Consumers are struggling to keep up with prices

Grocery and gas prices have already seen sharp increases over the past year. Rising wages have helped keep U.S. adults from falling too far behind on monthly bills, but confidence in their ability to afford these payments has dropped. Consumers are already allocating a rising share of household budgets to high-inflation categories, and incomes for most aren’t expanding fast enough to keep up with rising expenses. 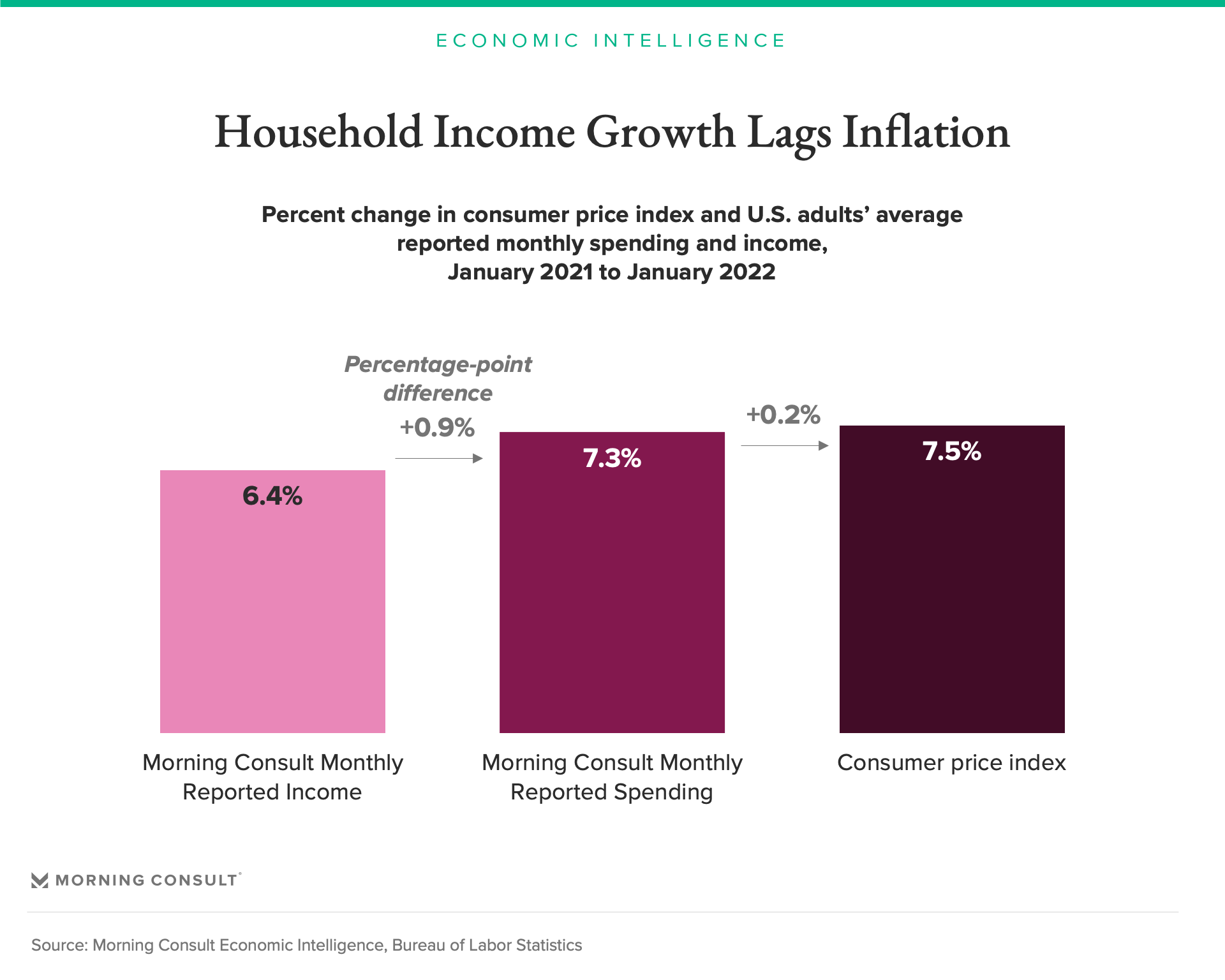 Major purchases and discretionary spending are first on the chopping block

In February, more than 2 in 3 adults who considered buying a home or car did not end up making the purchase — and about half of those who opted out of these potential purchases cited high prices as the reason. Discretionary purchases like exercise equipment and vacations were also subject to a high level of unfulfilled buying considerations last month. 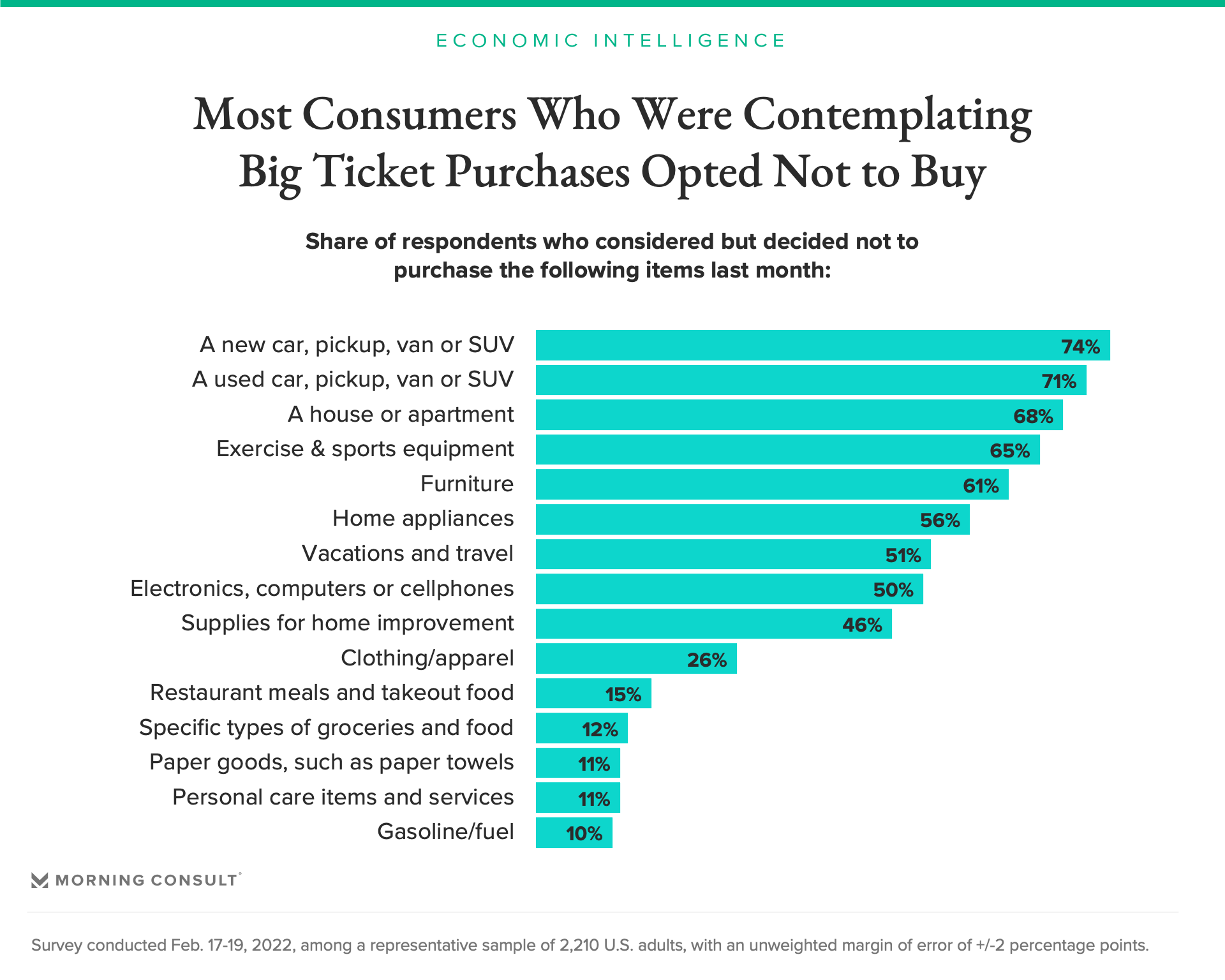 Contemplated but unfulfilled purchases of large expenditures on discretionary items likely primarily reflect deferred, rather than canceled, demand. The fact that so many U.S. adults did not purchase a car or home last month does not mean that they no longer need a car or home. Instead, it signifies a change in the way Americans view such buying decisions: They believe they are better off not making the purchase right now.

For most adults who opted out of large expenditures or discretionary purchases, high prices were the most commonly cited reason. Unlike services prices, prices of goods — including cars — have relatively more potential to fall in the future if demand softens or supply expands. Some consumers who shied away from purchasing these products last month may be hoping to wait out supply disruptions and purchase goods at more favorable prices later on. 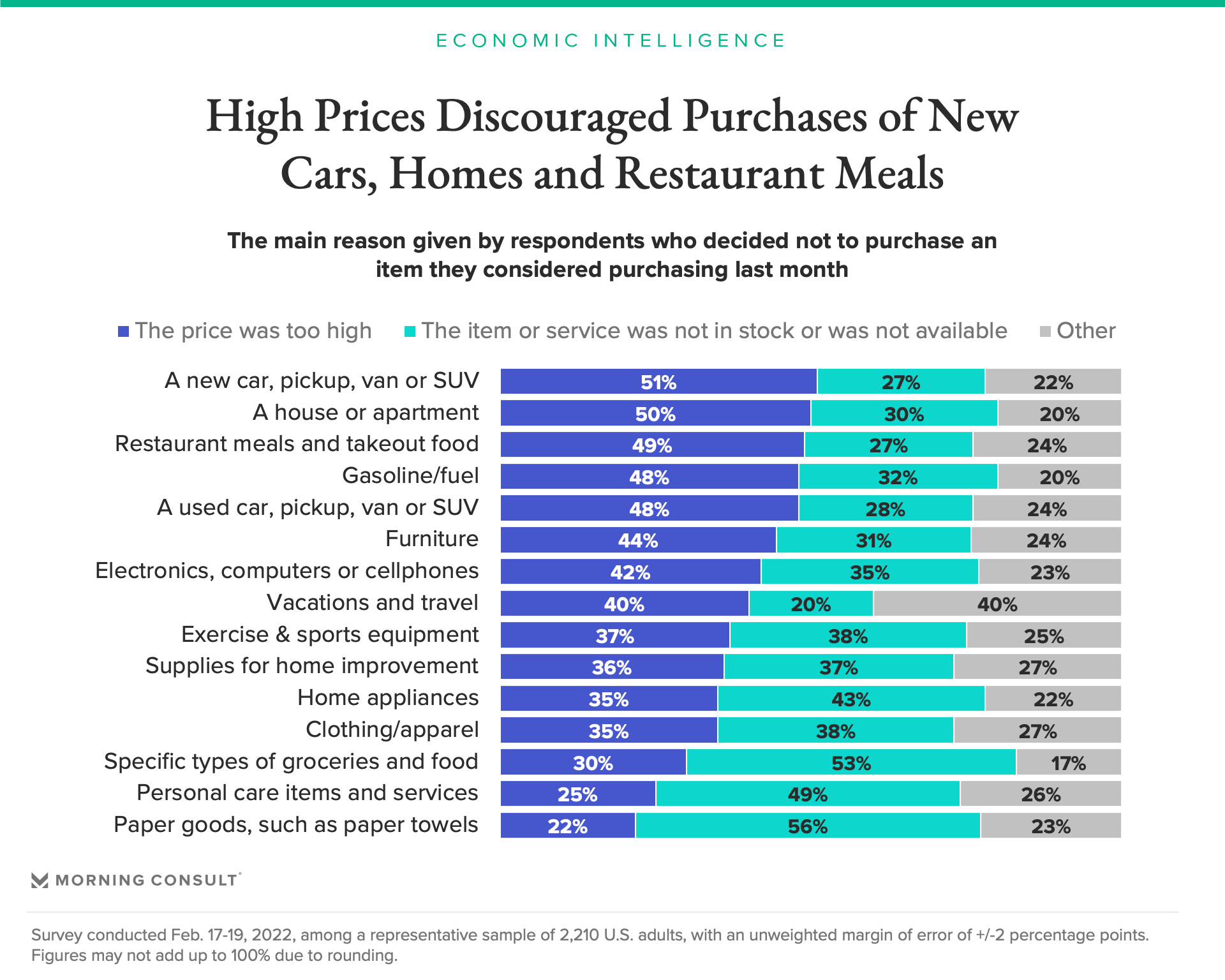 For certain items, like groceries, consumers have little choice in the matter: U.S. adults continue to prioritize buying goods that support essential functions of the household even as prices exact a growing strain on budgets. Only about 1 in 10 consumers who considered buying food items last month ended up not doing so, and this was more often due to limited availability from product shortages than price concerns.

Gas is another staple that consumers are bound to purchase regardless of higher prices. Car ownership increased during the pandemic as lifestyles shifted in favor of private vehicles over public transit. However, elevated gas costs are already starting to influence consumer behavior: Nearly a third of adults said they drove less than usual last month, and more than half of this group cited gas prices as the main reason. Supply disruption related to the conflict in Ukraine is stoking further increases in global energy prices, threatening to exacerbate this trend. 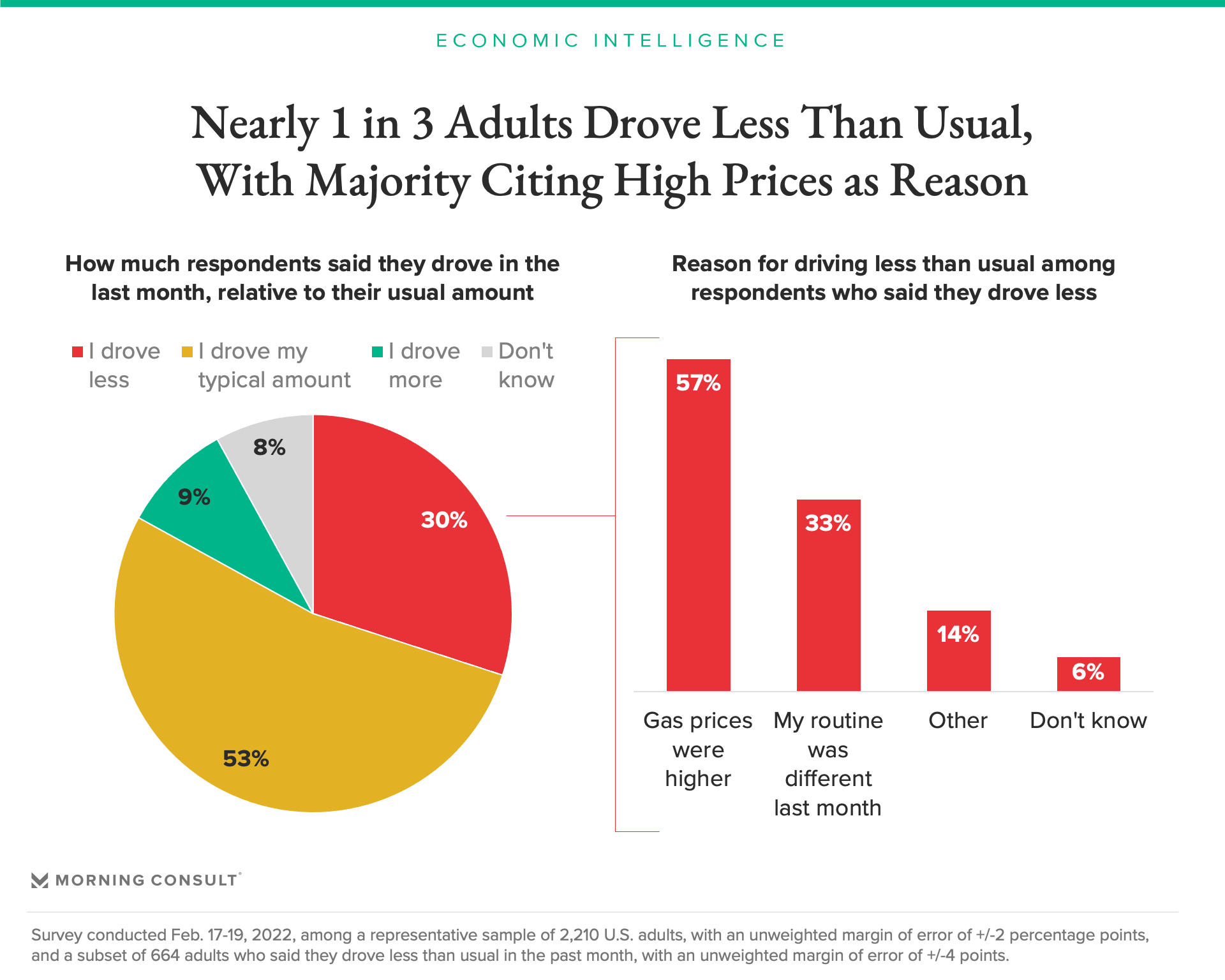 Prior to Russia’s attack on Ukraine, household budgets in the United States were already being strained by rising prices. Escalating tensions in Eastern Europe are further disrupting supply and driving up inflation for categories like gas and food. While consumers have little choice but to absorb some cost increases, it is likely that nonessential spending categories will suffer as a result.

The Russia-Ukraine conflict risks exacerbating U.S. inflation, which was already threatening consumer demand and overall economic growth. So far, sanctions are not directly targeting exports of which Russia is a major global supplier — like gas — but elevated tensions nonetheless pose a risk of supply disruptions and are already driving up global energy and wheat prices.

As household staples take up more space in monthly budgets and eat away at savings, consumers won’t be able to afford major purchases like houses or cars, and it may be difficult for them to justify discretionary expenses like restaurant meals and vacations. Additionally, behavioral responses to inflation, like driving less to limit gas consumption, could have secondary effects on economic activity, potentially reducing trips to restaurants or retail establishments. Inflation had already presented itself as a growing threat to economic growth in the United States, and recent geopolitical developments are adding fuel to the fire.