Europe Has Embraced Ukraine’s Struggle. But Without Long-Term Planning, It Could Become a Nightmare

Migration experts warn that the outpouring of generosity toward Ukrainians is likely to be short-lived, while an influx of weapons and refugees into Europe could precipitate the next crisis 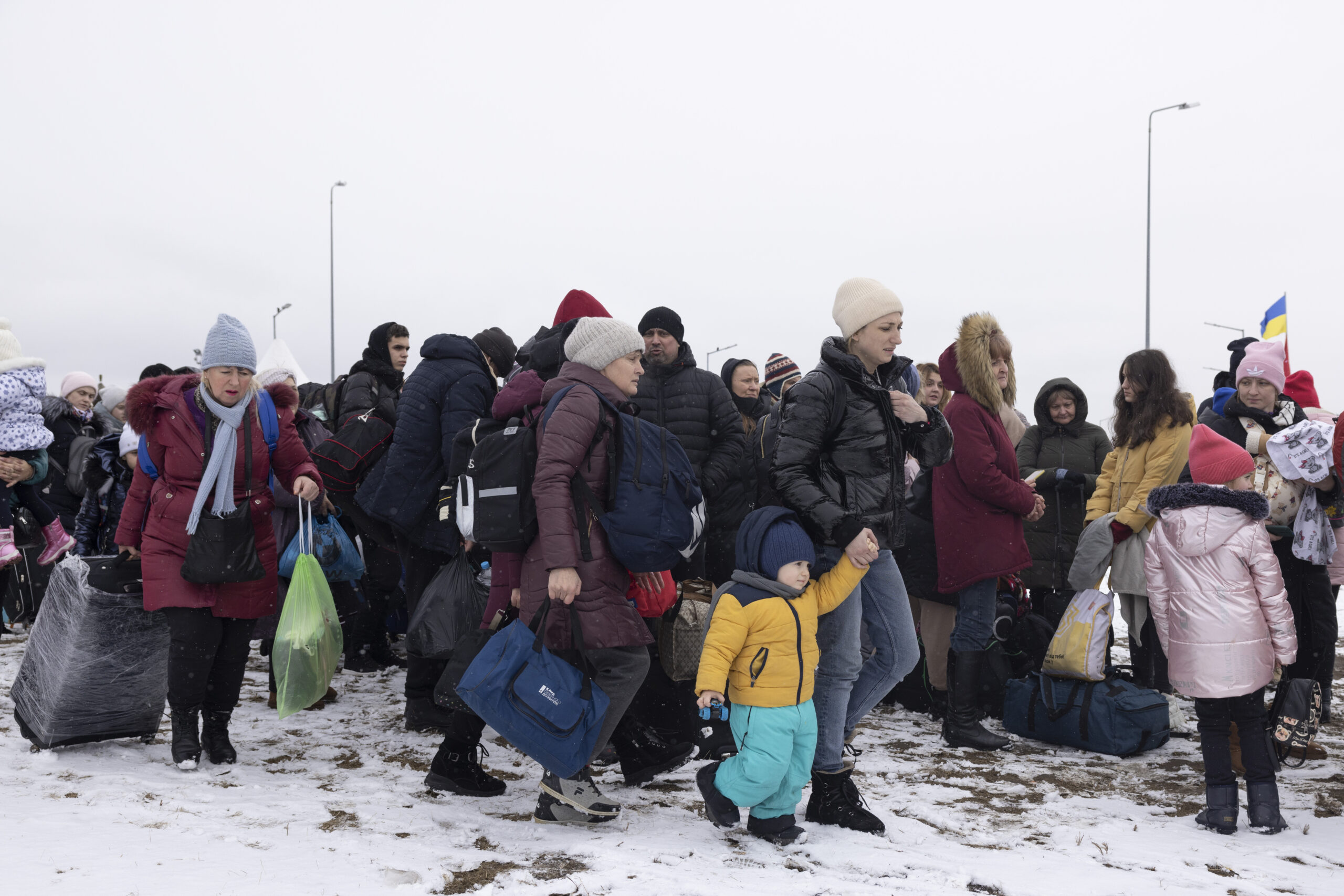 Refugees make their way to the Krakovets border crossing between Ukraine and Poland on Wednesday. (Dan Kitwood/Getty Images)
By Matthew Kendrick

The Western world has largely greeted Ukrainian migrants with open arms — and Ukrainian military officials with open arsenals — but the flood of refugees and weapons onto the continent could presage political crises down the track.

Like a good neighbor, Poland is there… for now

More than 2 million Ukrainian refugees have fled westward in just the 12 days since Russia’s invasion of their country, according to the United Nations, with more than 70 percent arriving in neighboring Poland, where regard for the fellow former Soviet-dominated republic runs high.

Good Neighbors: Poles Have the Most Positive Views of Ukraine

Surveys conducted over one month beginning Feb. 9, 2022, except in Ireland and Austria, where fielding began on Feb. 18, among a representative sample of at least 182 adults in each country, with unweighted margins of error of +/-3 to +/-7 percentage points. Figures may not add up to 100% due to rounding.

Poles have some of the most positive views of Ukraine across Europe, and communities along the border have made extraordinary efforts to accommodate their vulnerable neighbors, as have many in the other states to Ukraine’s west.

However, with current estimates predicting that up to 7 million people could end up fleeing Ukraine, the potential strain on resources in some of the European Union’s less prosperous economies could mean such generosity can only last so long.

“The current level of support and openness will probably not be sustained in the long term,” said Jasmijn Slootjes, a senior policy analyst at the Brussels-based Migration Policy Institute Europe.

She said support for refugees fleeing conflicts tends to peak at the outset but then wane as the reality — and the costs — of a sustained humanitarian effort become clearer, and the needs and interests of locals begin to compete for resources with those of the new arrivals.

Related: British Are Most Eager to Support Ukraine Out of NATO’s Four Biggest Economies

Notably, Poland, Germany, Hungary and the Czech Republic — four of the countries expected to receive the greatest number of Ukrainian refugees — have already faced chronic shortages of teachers for years, and health care systems across Europe have been strained to their breaking points by COVID-19. Meanwhile, a lack of affordable housing in Europe will be exacerbated by millions of new people desperately seeking shelter.

Taken together, the 1.4 million Ukrainian refugees already in Poland are equivalent to the population of the country’s second-largest city — and two more Ukrainians enter Poland every three seconds. The government in Warsaw is struggling to keep refugees off the streets, with emergency shelters becoming overcrowded almost as soon as they can be opened.

Even heroic efforts look like they could fall well short of what’s needed.

“If you count up the number of beds in reception areas pledged by Poland, Romania, Hungary and Slovakia, you get a couple hundred thousand,” said Natalia Banulescu-Bogdan, associate director of the international program at the Migration Policy Institute in Washington. “That is not even close to the most conservative estimates of the number of displaced Ukrainians.”

There are some rays of hope, though, as many Ukrainians seek out family and friends already living in the European Union, with more than half a million members of the Ukrainian diaspora living in Spain, France and Italy. The European Union has also issued a temporary directive allowing Ukrainians to enter the bloc, travel to the country where they hope to settle, and then live, work and collect social benefits until March 4, 2023, with the possibility of extensions.

But migration experts expect the lion’s share of Ukrainians to remain in the states closest to their homeland, as is typical of most refugee crises.

How to make new lives worth living

Europe’s leaders have shown unanticipated unity and political will in responding to Russia’s invasion of Ukraine with sanctions against Moscow and arms shipments to Kyiv.

The question now becomes how sustainable and replicable that shift will be, and whether Europe will be willing to make the kind of investments necessary to integrate Ukrainians over the long term, particularly if the war drags on for months or years.

A protracted conflict would pose major challenges to the governments of Poland, Hungary, the Czech Republic, Romania and Slovakia, which do not have long histories of welcoming migrants.

“They don’t have the same mechanisms, structures and policies in place as the Swedens and Germanys of Europe,” said Banulescu-Bogdan, adding that ongoing financial and logistical support from Europe’s wealthier western flank would be needed. “There’s going to be a steep learning curve and they’re going to need a lot of E.U. funds, but even with funds, they lack organizations with the capacity to create effective programs for refugees.”

Yet even in Western Europe, support for humanitarian efforts can be tinged with a political flavor.

En Marche! — French President Emmanuel Macron’s party — was included among the left-leaning parties.
Surveys conducted Feb. 24, 2022, among a representative sample of at least 998 adults in each country, with an unweighted margin of error of +/-3 percentage points.

Right-leaning Europeans in the continent’s west are already less likely to view aiding refugees as an obligation, and inflation and a shaky post-pandemic economic recovery mean there can be no political guarantees of ongoing support.

A lack of long-term leadership from Europe’s wealthier nations could then have severe consequences in the countries that cannot simply choose to ignore outflows of refugees from Ukraine. And if efforts to integrate the refugees fail, this would open new avenues for extremism to seep back into Europe, said Dr. Arie Kruglanski, a professor of psychology at the University of Maryland who studies the psychosociological roots of extremist violence.

Kruglanski said he expects the outpouring of generosity toward Ukrainians to be short-lived, and that European governments — even those where views of Ukraine are most positive at the moment — could soon find themselves struggling to provide the support needed.

“Poland is already very far to the right and very nationalistic. The government is very right-leaning, and this crisis is going to strengthen far-right anti-refugee movements and militias,” Kruglanski said. “​​This refugee situation is likely to fester for an indeterminate length of time, and is not a problem that is going to be resolved with short-term thinking.”

Live by the sword…

Arms control experts, too, say a short-term approach has dominated thinking by Western governments when it comes to helping Ukraine defend itself, with equally concerning ramifications.

En Marche! — French President Emmanuel Macron’s party — was included among the left-leaning parties.
Survey conducted Feb. 24, 2022, among a representative sample of at least 998 adults in each country, with an unweighted margin of error of +/-3 percentage points.

Support for direct military aid to Ukraine has risen and support for diplomacy has fallen across Europe over the course of the Russia-Ukraine crisis, with left-leaning Europeans throwing off their reputations for dovishness to show more support for defending Ukraine against Russia than their more conservative compatriots.

Even Berlin — long allergic to anything evoking memories of its militarism during World War II — has suddenly shifted course and joined its NATO allies in pouring weapons into Ukraine without much discussion on the risks of blowback.

But pouring armaments into a country to defend itself can also have unintended consequences that will have to be dealt with by future European governments long after the current moment of unusual political will, driven by sympathy for the plight of the Ukrainians, has dissipated.

Ukraine could easily now slip into “a bloody, nasty guerrilla war for a generation, in which people will flock not to the moderates but to the more radical elements, as we saw in Syria and Libya,” said Dr. Osamah F. Khalil, head of international relations at Syracuse University’s Maxwell School of Citizenship and Public Affairs. Already, armed neo-Nazi groups like the Azov Battalion are using the war to recruit.

At that point, rallying Europe together to clean up the mess on its eastern flank could prove even more important than the initial display of solidarity after Russia’s invasion.

Jeff Abramson, a senior fellow at the Washington-based Arms Control Association, pointed out that distributing weapons to untrained civilians, as Kyiv has done seemingly out of necessity, often makes it very difficult to control how those weapons are used or to rein them in later.