Millions Will Lose Medicaid Coverage When the COVID-19 Emergency Ends. Health Care Groups Are Scrambling to Fill the Gap 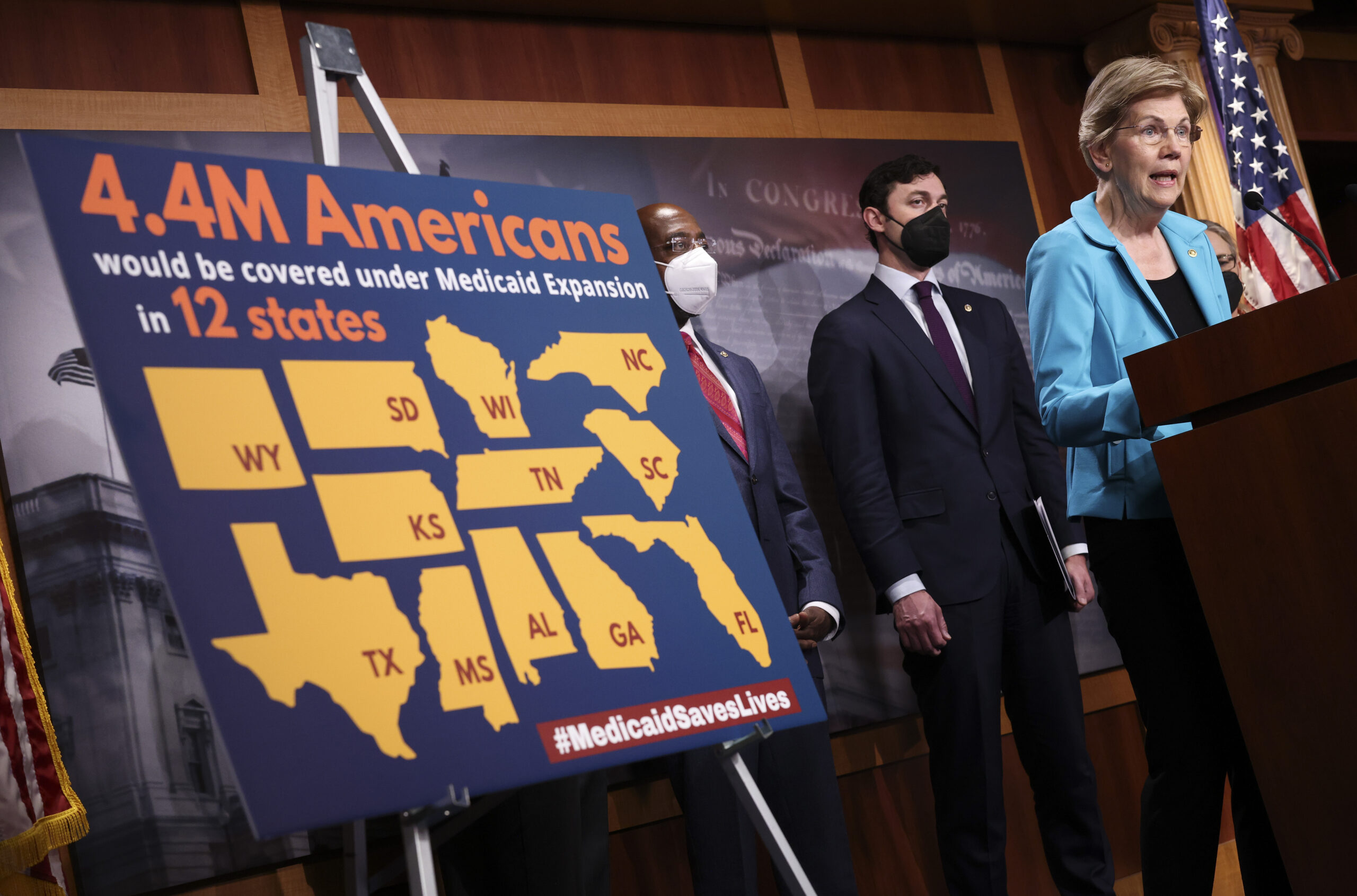 Sen. Elizabeth Warren (D-Mass.) speaks on Medicaid expansion and the reconciliation package during a press conference with fellow lawmakers at the U.S. Capitol on Sept. 23, 2021, in Washington, D.C. (Kevin Dietsch/Getty Images)
By Gaby Galvin

Nearly 16 million people could lose their Medicaid coverage after the national public health emergency ends, new estimates show, and while health care groups are asking for months of notice before that happens, the burden that the end of the emergency period will cause them will only grow the longer it wears on.

Throughout the COVID-19 pandemic, the federal government has given extra funding to state Medicaid programs — as long as they agree not to cut people from Medicaid during the public health emergency, even if beneficiaries lose eligibility in that period. From February 2020 to September 2021, enrollment in Medicaid and the Children’s Health Insurance Program has surged by 19.1 percent, reaching 84.8 million.

That means that as states eye the winding down of the emergency and the loss of extra federal funding, which could be triggered as soon as July, they’re facing a massive backlog of work to determine who’s still eligible for Medicaid coverage. The new estimates from the Urban Institute indicate that the coverage losses will be greater the longer the health emergency goes on: 12.9 million if it expires at the end of March, 14.4 million in June and 15.8 million in September.

Medicaid spending is also dependent on when the emergency ends. If it expires in the second quarter, for example, federal and state spending on acute care for nonelderly patients will reach $583 billion in 2023. 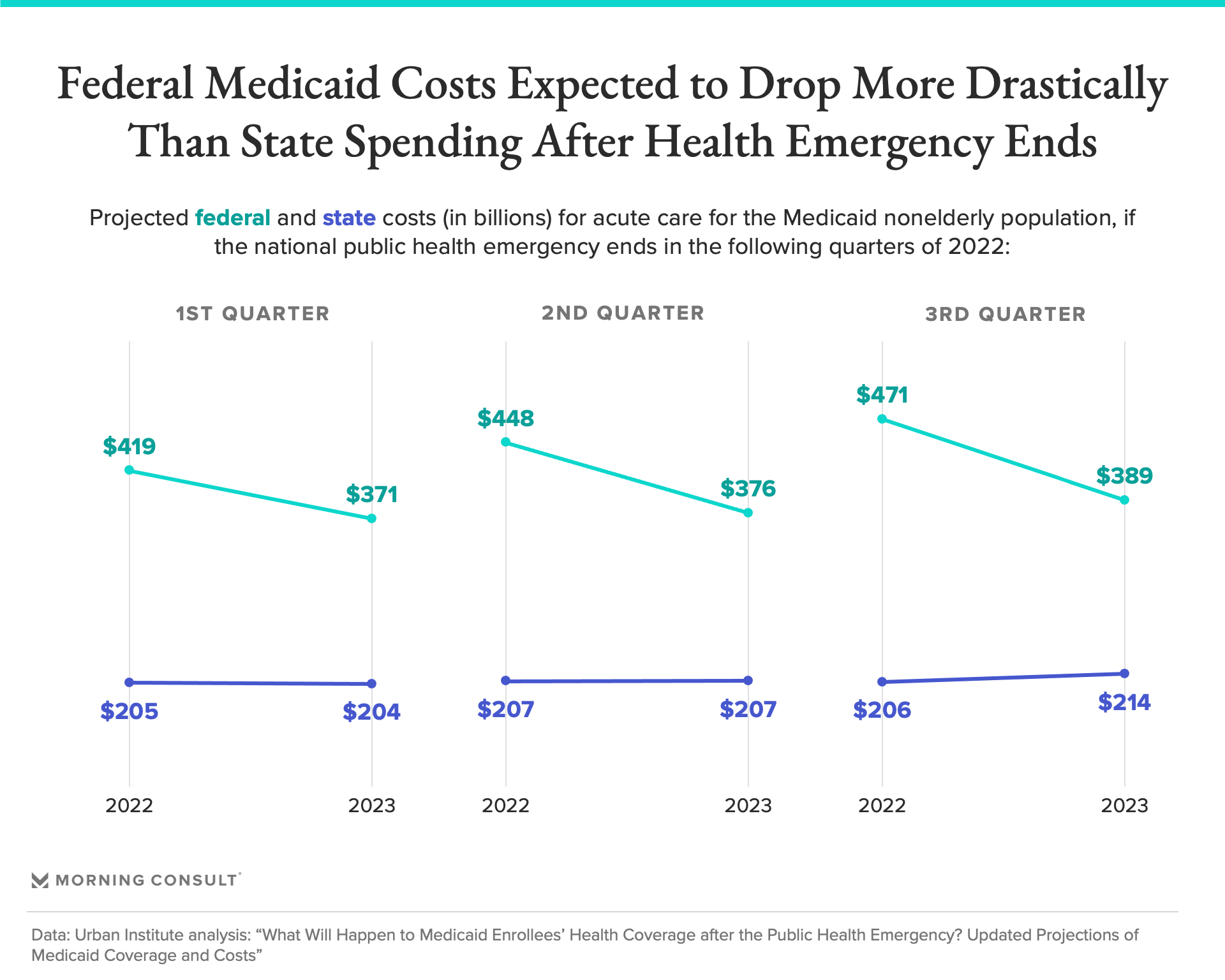 Meanwhile, groups working with payers, including the Centers for Medicare and Medicaid Services, are looking to ensure that the process doesn’t lead to a massive surge in the number of uninsured. But they are facing a tangled web of bureaucratic hurdles and other challenges.

“A quarter of America has to go through the redetermination process,” said Craig Kennedy, president and chief executive of the Medicaid Health Plans of America, which represents the Medicaid managed care industry. “That takes all hands on deck.”

Options for beneficiaries dropped by Medicaid will vary by state

The next steps for people who lose Medicaid, and how easy it will be for them to get other coverage, will depend on where they live. Many are likely eligible for subsidized coverage on Obamacare plans, and CMS is encouraging flexibility for managed care companies with both marketplace and Medicaid plans to do outreach to people being kicked off Medicaid and help move them onto the exchange.

“If a state runs their own marketplace, it’s the same interface for Medicaid and the marketplaces,” said Matthew Buettgens, a senior fellow in the Health Policy Center at the Urban Institute and author of the new report. “If you’re losing Medicaid eligibility, they should be able to very quickly determine that you’re eligible for tax credits and keep you from losing coverage.”

He said that process could be slower in the 33 states that don’t run their own exchanges, though.

Jennifer Babcock, senior vice president for Medicaid policy at the Association for Community Affiliated Plans, said one of the biggest challenges is also one of the seemingly simplest: ensuring state agencies in charge of the redetermination process have the right contact information for people on Medicaid.

That’s because of “the disruptive nature of the pandemic — around unemployment, around living arrangements and that sort of thing,” Babcock said, adding that states should be looking to community-based services to find the most up-to-date information.

Kennedy, for one, said that in states with Medicaid managed care, “everyone interacting with Medicaid populations should be considered a partner” in the process, including providers and nonmedical services like transportation.

Change in Medicaid and CHIP enrollment, February 2020 to September 2021

Some states may be in better shape than others; some have been keeping up with their redetermination checks throughout the pandemic but keeping newly ineligible people enrolled in Medicaid because of the federal rules.

“It will depend on state administrative capacity, bandwidth and resource allocation, and it’s going to look different from state to state,” said Jack Rollins, director of federal policy at the National Association of Medicaid Directors, which represents state Medicaid officials. “It’s an environment of planning for, and weeding through, uncertainty.”

Redetermination isn’t the only challenge. While many of those losing Medicaid coverage may be able to transition to Obamacare plans, those plans may no longer be affordable if the premium subsidies that Congress passed last year aren’t extended.

The subsidies, which led to a jump in Affordable Care Act enrollment last year as private coverage became cheaper for millions of people, are currently set to expire at the end of 2022. And the lowest-income enrollees would see the steepest increases in premiums and deductibles. Democrats included an extension of the subsidies in their “Build Back Better” social spending bill last year, though other more controversial measures mean the package has failed to garner enough support in the Senate.

The coverage cliff, and the deluge of work ahead, is part of why states and health groups alike are asking for extra time to work through the process of determining who’s still eligible for Medicaid. The Biden administration told states this month that they will have 14 months after the health emergency ends, though it’s still not certain when that will be.

Congressional Republicans, for example, have been pushing for a sooner expiration, while a group of Democratic governors recently asked for an extension beyond April, when the emergency declaration is currently set to end. Yet as the past two years have shown, declarations of victory against the pandemic — and the unwinding of health measures — have often proven premature.

“With where we are in the pandemic now, I think it’s really hard to really know when we’re going to be out of it,” Rollins said. “The more time states have, the smoother this is all going to be.”

Related: Medicare Advantage Is Growing, but Roadblocks Could Emerge for Some Health Insurers as Competition Heats Up

Correction: The piece has been updated to reflect that states should not look to pharmacists for contact information for people on Medicaid, per an email that Morning Consult received from Jennifer Babcock, senior vice president for Medicaid policy at the Association for Community Affiliated Plans, after publication of the piece.