As Lawmakers Determine Where Federal Infrastructure Funding Will Be Spent, Urban Voters Support Policies That Would Prioritize Public Transit

For urban voters as a bloc, the top infrastructure priorities are roads and bridges, affordable housing and clean power 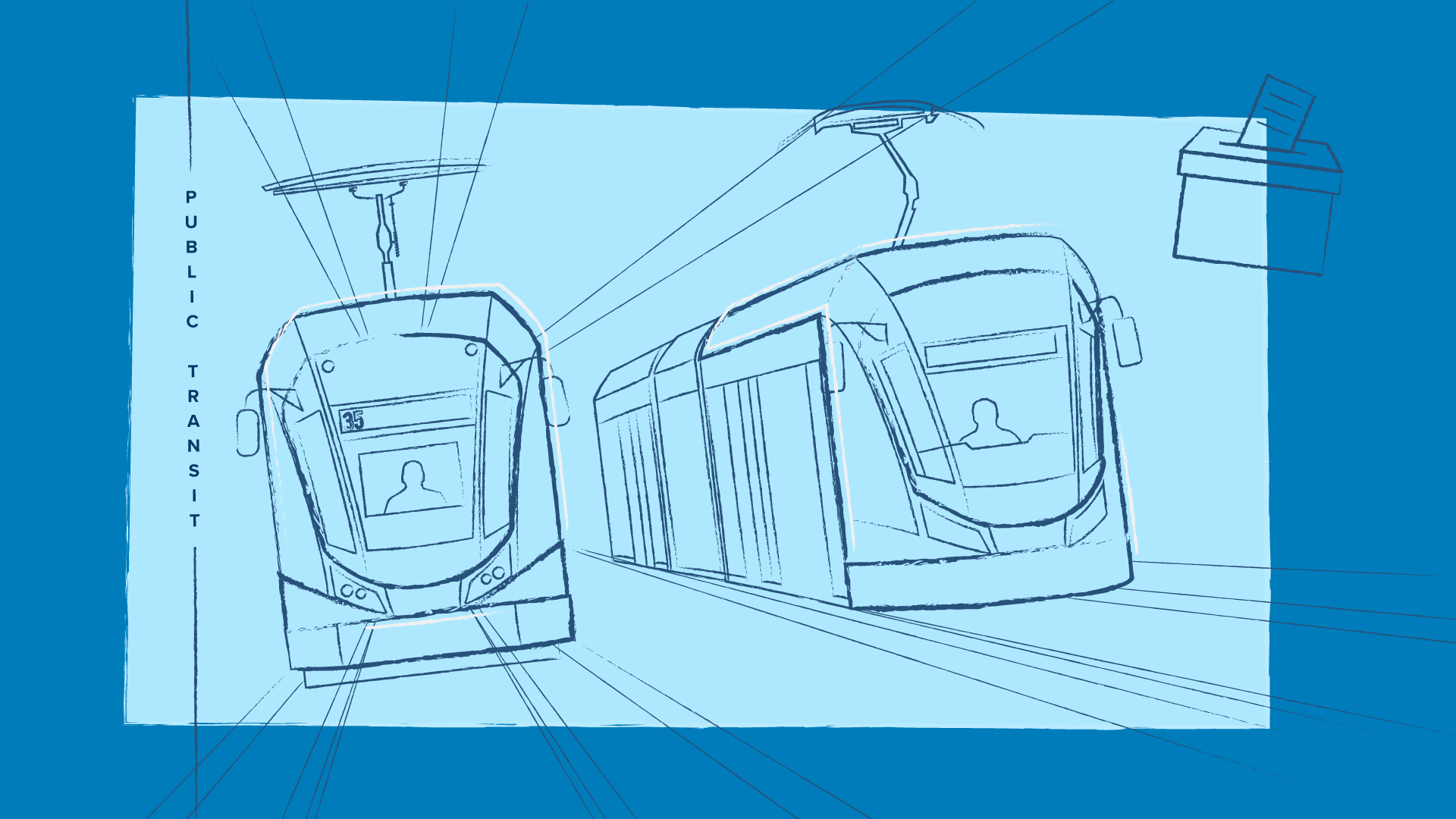 Billions of dollars will be making their way to cities nationwide in the coming months and years, where those funds will be devoted to infrastructure improvements guided by the letter of the recently passed infrastructure law.

The White House has described one portion of this pot as the largest investment in the country’s public transit systems in U.S. history, to the tune of $39 billion in new investments to modernize transit and to remedy the repair backlog. This comes alongside funds that will reauthorize existing surface transportation spending for the next five years, which comes to $89.9 billion in total for public transit. Research has shown that these potential investments could either increase or decrease the country’s carbon emissions, depending on how they are allotted.

This comes in the wake of the latest installment of the United Nations Intergovernmental Panel on Climate Change’s sixth report, which covers the impacts of climate change on the environment, societies and the planet itself. It found that the phenomenon is already prompting “dangerous and widespread disruption” to the lives of billions of people worldwide, and that cities (especially in low-income countries) are particularly at risk. However, the researchers also found that there is opportunity to make cities more resilient and more equitable as they grow, largely through infrastructure investments.

One significant piece of that climate puzzle, especially in the United States, is the transportation sector, given that it is the country’s largest contributor to greenhouse gas emissions.

“There is considerable evidence that the transportation system in the United States is incredibly damaging for the climate,” said Yonah Freemark, a researcher focused on transportation and land use at the Urban Institute, adding that this is less the case in other countries with more developed public transit, biking and pedestrian infrastructure.

“One massive element of a climate change response strategy in the U.S. — and also all around the world —  is continuing to push to move people away from reliance on automobiles and get them to walk, bike and take transit. Unquestionably.”

When it comes to infrastructure investments, drivers and public transit users see some things differently 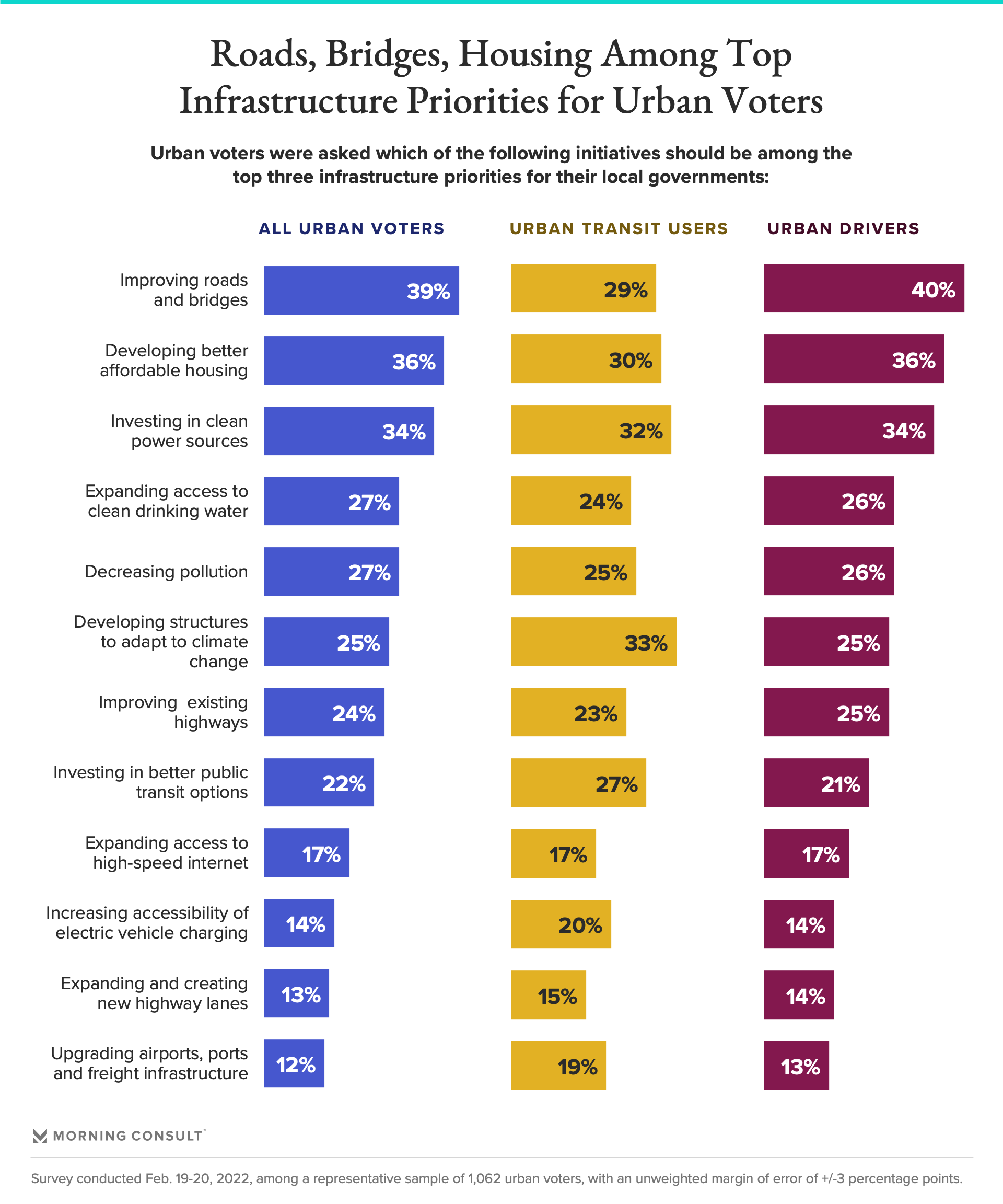 (It is worth noting that the sample of urban drivers is nearly double that of the urban transit user sample, and there is some overlap between them. They carry unweighted margins of error of plus or minus 3 percentage points and 4 percentage points, respectively.)

The preferences of urban drivers roughly mirror those of the group as a whole, but public transit users were more likely to support developing structures to adapt to climate change (33 percent), which the latest IPCC report emphasized as a necessity given the trajectory of global warming’s impacts. The report said coastal cities in particular are ill-prepared for climate change.

The survey found that no single initiative garnered the lion’s share of backing from urban voters outside of the group’s margin of error of 3 percentage points, suggesting that all or most will be met with enthusiasm when the law’s funding is finally disbursed. However, within the urban voter group, there were certain demographic differences in priorities.

For instance, white voters were more likely to prioritize improvements to roads and bridges (43 percent) than voters of color (33 percent). And voters of color were more likely to prioritize safer and better-quality affordable housing options (42 percent) and expanded access to clean drinking water (32 percent) than their white counterparts (32 percent and 23 percent, respectively).

Urban voters were asked which of the following transit improvements should be the top priority for their local government:

Survey conducted Feb. 19-20, 2022, among a representative sample of 1,062 urban voters, with an unweighted margin of error of +/-3 percentage points. Don’t know/No opinion responses are not shown.

Meanwhile, some Republican governors have argued that their states should be able to use infrastructure funds to expand highways despite the federal guidance that doing so would not be allowable under the law. However, nearly three-quarters (73 percent) of urban voters said their local government should focus on improving existing highways and public transit options in their community, rather than on building additional highways.

When it comes to urban voters’ impressions of their existing public transit systems, it seems that exposure is the key to affection: Public transit users are markedly more likely than drivers to describe their transit as “excellent” or “good,” according to the survey.

Share of urban voters who described the quality of their city’s public transportation system in the following ways:

Even without the infrastructure bill’s promised upgrades to the public transit system, 7 in 10 urban transit users currently say the quality of their system is excellent (36 percent) or good (34 percent). This is compared with the 20 percent of urban drivers who say their local system is excellent, and the 31 percent who say it is good. Slim minorities of both groups (12 percent and 17 percent, respectively) describe their systems as “poor” or “very poor.”

It seems that even those who currently rely largely or exclusively on cars see the potential benefits of public transit access. When asked which would most improve the quality of life for people in their city, expanding free public transit (such as free passes for students or seniors) won out over expanding free parking (such as removing certain parking meters), 57 percent to 33 percent. That includes majorities of both transit users and drivers.

And congestion pricing, a charge for drivers who choose to enter the busiest parts of the city during times of peak traffic that is intended to reduce traffic and pollution, also has more support than opposition from urban voters. Research has shown congestion pricing helps alleviate traffic and improves driving efficiency far better than adding lanes, which has virtually no effect; the number of drivers on the road tends to swell to fill the additional space.

More Than Half of Urban Voters Back Congestion Pricing to Reduce Traffic, Pollution
Nearly 3 in 4 urban transit users say they support congestion pricing

Urban voters were asked to what extent they support congestion pricing, which is a charge for drivers who choose to enter the busiest parts of the city during times of peak traffic

While a number of major international cities have congestion pricing — including London, Stockholm and Singapore — it remains relatively uncommon in the United States. However, a congestion pricing plan for New York City is currently under a review that will last through 2023, after state lawmakers approved a plan to toll drivers entering the busiest parts of Manhattan.

But despite the popularity of these policies that could bolster the nation’s public transit system, the pre-existing transportation landscape is a challenging one, Freemark said, given the entrenchment of policies that encourage car use to the detriment of transit. These include subsidies on road expenditures that outstrip what is collected through user fees (such as the gas tax), as well as a willingness to allow cities to develop in such a sprawling fashion that access to huge swaths via public transit is untenable.

And ultimately, there is only so much that the infrastructure bill — and federal policy writ large — can do. While Freemark expects some benefits to result from the law in the coming years, they will likely be concentrated in areas where federal funds are matched by local will.

”The reality is that in the United States we’ve chosen not to make land use transportation planning a national issue,” Freemark said. “And so I think that the ways we’re going to solve it are going to have to be putting pressure on local decision makers to make the right choices.”