18 countries are split on where the public gets COVID-19 news, places trust 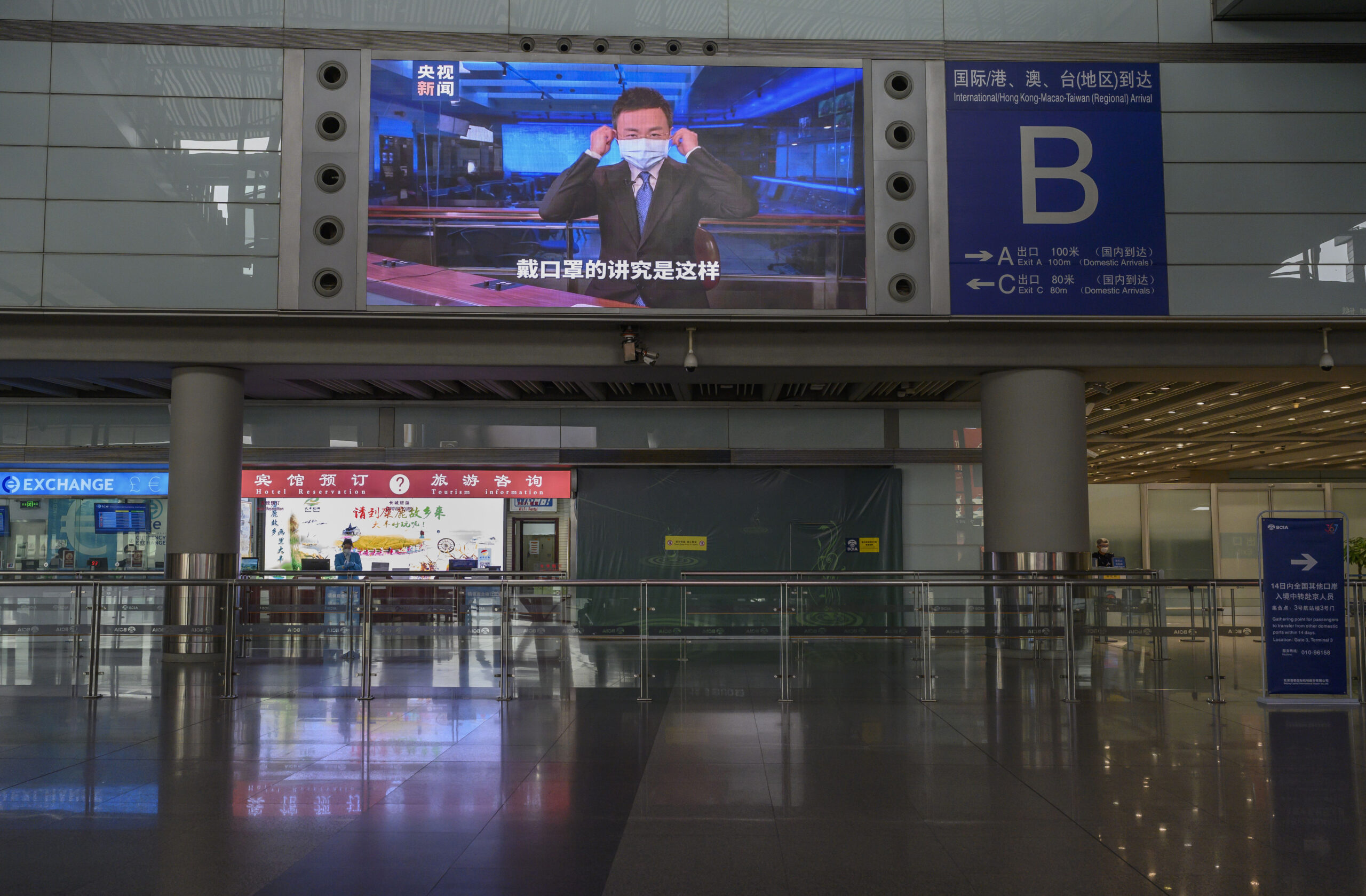 A Chinese news anchor demonstrates how to wear a protective mask in the nearly empty arrivals area at Beijing Capital International Airport on March 24, 2020. Two years into the pandemic, a Morning Consult survey found that adults around the globe said they feel “frustrated,” “worried, “hopeful,” “confident” and “assured” when they get the latest COVID-19 news. (Kevin Frayer/Getty Images)
By Gaby Galvin

Efforts to strengthen the flow of credible global health information could face an uphill battle, according to a new Morning Consult survey that comes as the pandemic enters its third year and Congress balks at granting more funding to combat it.

Global health leaders and policymakers are calling for a more cohesive international approach to quell the crisis while they push back against misinformation and aim to rebuild trust in health authorities. And whether they can do so will have major implications for current and future global health threats.

In the survey, adults in 18 countries had differing views on whether it’s easy or difficult to talk about COVID-19 with those who disagree with them, and there was a wide range in how much they trust institutions and how they get their pandemic-related news.

“COVID has shown us that a weakness in any one capacity, such as trust in government or public confidence, can be catastrophic to how a country responds,” said Jessica Bell, senior director of global biological policy and programs at the Nuclear Threat Initiative, where she helps lead work on its Global Health Security Index, which tracks international preparedness for pandemic threats.

Several countries are split on where they get their pandemic information

The survey shows where the public turns first for COVID-19 information. In Japan, for example, 68 percent of adults said they check news outlets most often, compared with 34 percent in the United States. Another 43 percent of Americans look to government officials or health care providers and roughly a quarter rely on family, friends or social media, compared with 12 percent and 20 percent among Japanese adults, respectively.

International surveys conducted March 1-13, 2022, among representative samples of roughly 1,000 adults each, with unweighted margins of error of +/-3 percentage points. U.S. survey conducted March 1-3, 2022, among a representative sample of 2,210 adults, with an unweighted margin of error of +/-2 percentage points.

The findings also suggest people are overwhelmed with news, with adults across the globe frequently saying they feel “frustrated” and “worried” when they get the latest information about the pandemic, though many were also “hopeful,” “confident” and “assured”

“We’re very much in an information overload environment,” said Dr. Georges Benjamin, the longtime executive director of the American Public Health Association. “The fact that people are getting their information from other sources, not the experts, tells you that the other sources and other groups are actually communicating with people.”

Many adults express skepticism about their countries’ institutions

That sentiment is mirrored in the apparent lack of trust in institutions identified in the survey. Morning Consult asked respondents how much they trust a variety of groups — such as local governments, the health care system, employers, news media and religious leaders — and categorized them as either “trusting” or “not trusting” if they scored above or below certain thresholds.

Adults in India, Singapore and China were the most likely to say they trust institutions, while those in Argentina, Colombia and Italy were the most mistrustful. (The surveys are conducted via the internet, so people without broadband access may not be fully represented, while those in authoritarian countries may feel less free to respond honestly.)

The lack of confidence in authority figures is a problem because it “creates the environment in which misinformation can flow,” said Dr. Brian Castrucci, president and chief executive of the de Beaumont Foundation, a public health nonprofit.

India, Singapore, China Most Likely to Say They Trust Institutions

Share of adults who either said they do or do not trust at least five institutions in the survey, such as local governments, the health care system, news media and religious leaders

International surveys conducted March 1-13, 2022, among representative samples of roughly 1,000 adults each, with unweighted margins of error of +/-3 percentage points. U.S. survey conducted March 1-3, 2022, among a representative sample of 2,210 adults, with an unweighted margin of error of +/-2 percentage points. The “trust” threshold for U.S. adults was at least seven institutions.

Despite broad support for COVID-19 measures, public in many countries has a hard time discussing the pandemic

Despite the mixed messages from health bodies and political leaders, particularly in the pandemic’s early days, the global public is largely aligned on public health measures. Across countries, adults overwhelmingly agreed that steps like COVID-19 vaccination, indoor mask-wearing, social distancing and staying home when sick are important ways to keep them and their loved ones from getting sick.

Even so, the pandemic remains polarizing. In most countries surveyed, adults were more likely to say it’s difficult than to say it’s easy having conversations about COVID-19 with people who have opposing views — though to differing degrees. In Italy, for example, an overwhelming 76 percent of adults said it’s difficult to do so, compared with a 46 percent plurality in South Korea.

In 17 Countries, Fewer Than Half of Adults Say It’s Easy to Talk About COVID-19 With People Who Disagree With Them

International surveys conducted March 1-13, 2022, among representative samples of roughly 1,000 adults each, with unweighted margins of error of +/-3 percentage points. U.S. survey conducted March 1-3, 2022, among a representative sample of 2,210 adults, with an unweighted margin of error of +/-2 percentage points. Figures may not add up to 100% due to rounding.

Benjamin said the findings show that global leaders should invest in public health messaging early on in health crises, including outreach to both trusted messengers and those who aren’t as receptive or are even hostile to officials.

“We have to sit down and very deliberately figure out how we want to deliver that message in places where our messages may not be well heard,” he said.

It’s not too late to do that for COVID-19. In the survey, adults were split on when they think it will no longer be affecting daily life. Roughly 7 in 10 Indian adults, for example, said that will be within the next three months, while just 6 percent of Japanese adults said the same.

Meanwhile in the United Kingdom, where a subvariant of the omicron strain has been driving up COVID-19 cases, adults couldn’t come to a consensus: 30 percent said it’ll be more than a year before the pandemic is no longer affecting daily life, while 22 percent said it’ll be within the next three months and 29 percent said somewhere in between.

Even beyond the COVID-19 pandemic, though, Benjamin warned that other global health threats are on the horizon — and that leaders don’t have long to adopt the lessons of the past two years to prepare for them.

“The next pandemic is not another 100 years from now,” he said. “It’s right around the corner.”