Despite Friction Over the Nuclear Deal, Iran Is Sticking By an Unpopular Russia — for Now 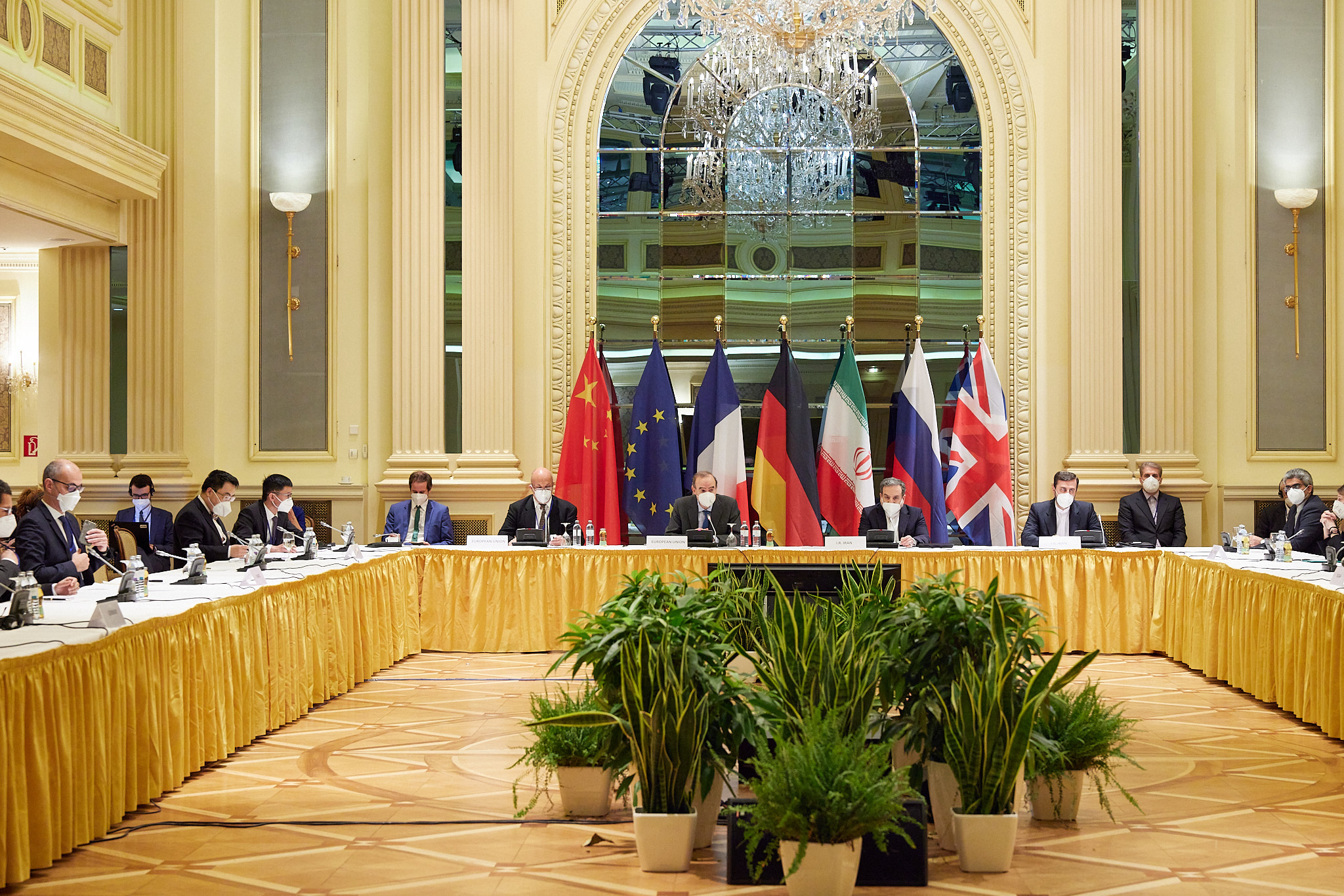 Representatives of the European Union, Iran, Russia and the United Kingdom attend talks at the Grand Hotel in Vienna in April 2021. (Photo by EU Delegation in Vienna via Getty Images)
By Matthew Kendrick

This article is part of a series exploring how Russia’s invasion of Ukraine is altering its relationships with its relatively few allies. See our deep dive on the implications for China.

As global opprobrium fell on Russia following its invasion of Ukraine, relations between Iran and Russia briefly flared when Moscow threw an 11th-hour wrench into negotiations to resume the 2015 Iran nuclear deal — and, in doing so, learned that weaponizing alliances of convenience can cut both ways.

As the negotiations in Vienna to resume the 2015 agreement trashed by former U.S. President Donald Trump dragged on for months, Russian diplomats earned plaudits for their perceived role as a constructive mediator by, for example, persuading Tehran to limit its provocative enrichment of nuclear fuel.

After Russia attracted global condemnation and sanctions for its invasion, the talks in Vienna became one of the few international fora where Moscow could still exert influence — particularly following embarrassing abstentions from Iran, China and other erstwhile friends on a vote to denounce Russia at the U.N. General Assembly.

Russia’s Invasion of Ukraine Has Damaged Its Global Reputation

Each data point reflects a 7-day moving average of a representative sample of at least 311 adults in each country, with unweighted margins of error of +/-1-6 percentage points.

Moscow then decided to disrupt talks just as a deal seemed nearly in hand by demanding new guarantees its trade with Iran would not be affected by U.S.-led sanctions over Ukraine.

“Moscow’s hindrance was probably a tactical gambit aimed at delaying the return of Iran’s oil to the market or sabotaging the negotiation process entirely to add one more international crisis to Biden and European allies’ plate,” explained Ali Vaez, the Iran Project director at the International Crisis Group.

“It was very crude on the part of the Russians, and it certainly was not appreciated in Iran,” added Barbara Slavin, a senior fellow at the Atlantic Council and director of the Future of Iran Initiative. “It gave some new ammunition to groups in Iran who say, ‘Look, this is why we need the nuclear deal back — we can’t put all our eggs in the Russian basket.’”

Shortly after Russia issued its demands, Iran dispatched Foreign Minister Hossein Amir-Abdollahian to Moscow for urgent talks. No one is sure what was said, but the Russians soon after rescinded their new demands.

That, Slavin said, was because Moscow realized Tehran’s displeasure at the apparent act of sabotage risked cutting them out of the dealmaking entirely.

“It would force the other negotiating countries to find another workaround, and could actually push Iran closer to the United States and the other countries,” she said.

There was also an economic imperative for a heavily sanctioned Russia: Under the terms of the Iran deal, Russia’s civilian nuclear power agency Rosatom supplies Iran’s nuclear fuel, collects excess enriched uranium, and helps develop Iran’s civilian nuclear program. Those all mean cold, hard cash for Moscow as it faces crippling global sanctions, which have unavoidably altered the dynamic of the relationship.

“The sanctions-proofing Russia spent six years setting up has proven less effective than many thought,” said Sonnet Frisbie, Morning Consult’s managing director of geopolitical risk analysis for Europe, the Middle East and Africa. “There’s going to be a really interesting dynamic in the coming months: How can Iran potentially help Russia?”

Related: Many U.S. Voters Support a Binding Nuclear Deal With Iran. That Might Not Count for Much

With Russia’s last-minute thrust safely parried, negotiators say only one major obstacle remains to sealing a return to the 2015 deal: The Iranian Revolutionary Guard Corps’ designation as a terrorist organization by the United States.

The IRGC is accused of killing hundreds of Americans over the years, but U.S. officials are said to believe that preventing Iran from building nuclear weapons will do more to safeguard American lives than maintaining the designation, according to The Wall Street Journal.

And a deal is within reach “if the U.S. and Iran show more flexibility and do not allow perfect to be the enemy of good,” said Vaez.

That could open up avenues for Iran and the United State to pursue an easing of tensions and for Tehran to lessen its reliance on Russia. At the end of the day, like any budding middle power, Iran has permanent interests, but no permanent friends or enemies, and has long insisted it does not want to build nuclear weapons.

“Iran says they can protect themselves perfectly well without nuclear weapons,” Slavin said, adding that it did not appear to be a spurious claim. “Iran has very powerful partners in the Middle East: Hezbollah, Hamas, Palestinian Islamic Jihad, the Houthis. They have developed a forward defense using these groups that has kept their homeland safe.”

Still, Tehran’s room for maneuver with Moscow will also be limited by the United States.

Should a new deal be sealed, the onus of maintaining it will fall firmly on Washington’s shoulders, given that Trump unilaterally pulled out of the last one in 2018 and reimposed U.S. sanctions on Iran. That might be the biggest challenge of all, considering how virulently opposed Republican presidential hopefuls are to compromise with Iran.

“The extent to which this deal has become an American domestic political football is a disgrace,” said Justin Logan, a senior fellow at the Washington-based Cato Institute. “That if the presidency changes hands, the commitments of the United States will be ripped up and set on fire suggests a real inability to do even short-term strategic thinking.”

The Iranians are no fools, experts say, and two years of economic reprieve from U.S. sanctions before a return to the status quo may be not worth blowing up relations with one of its more reliable international partners.

“The deal will essentially give the Iranians economic reprieve for about two-and-a-half to three years, but no one’s expecting that it will last longer,” said Trita Parsi, founder and executive vice president of the Quincy Institute for Responsible Statecraft. “Are the Iranians going to risk a generation of enmity with the Russians over some sanctions relief for two and a half years? That doesn’t make any sense.”

But Parsi said Iran would be looking to capitalize on the shifting sands of world events — and that could leave Russian influence weakened in yet another onetime refuge.

“Right now, Iran needs the Russians for political reasons,” he said, “but fundamentally, Iran needs to diversify its partners, to make sure it’s never dependent on any one state again.”