Europeans Are Far Happier to Resettle Ukrainian Refugees Than Syrians or Afghans. But a Food Crisis Means They’re All Coming

As the war in Ukraine roils global food supply chains, the refugee crisis in Europe will only be compounded by more arrivals from the Middle East, Africa and South Asia 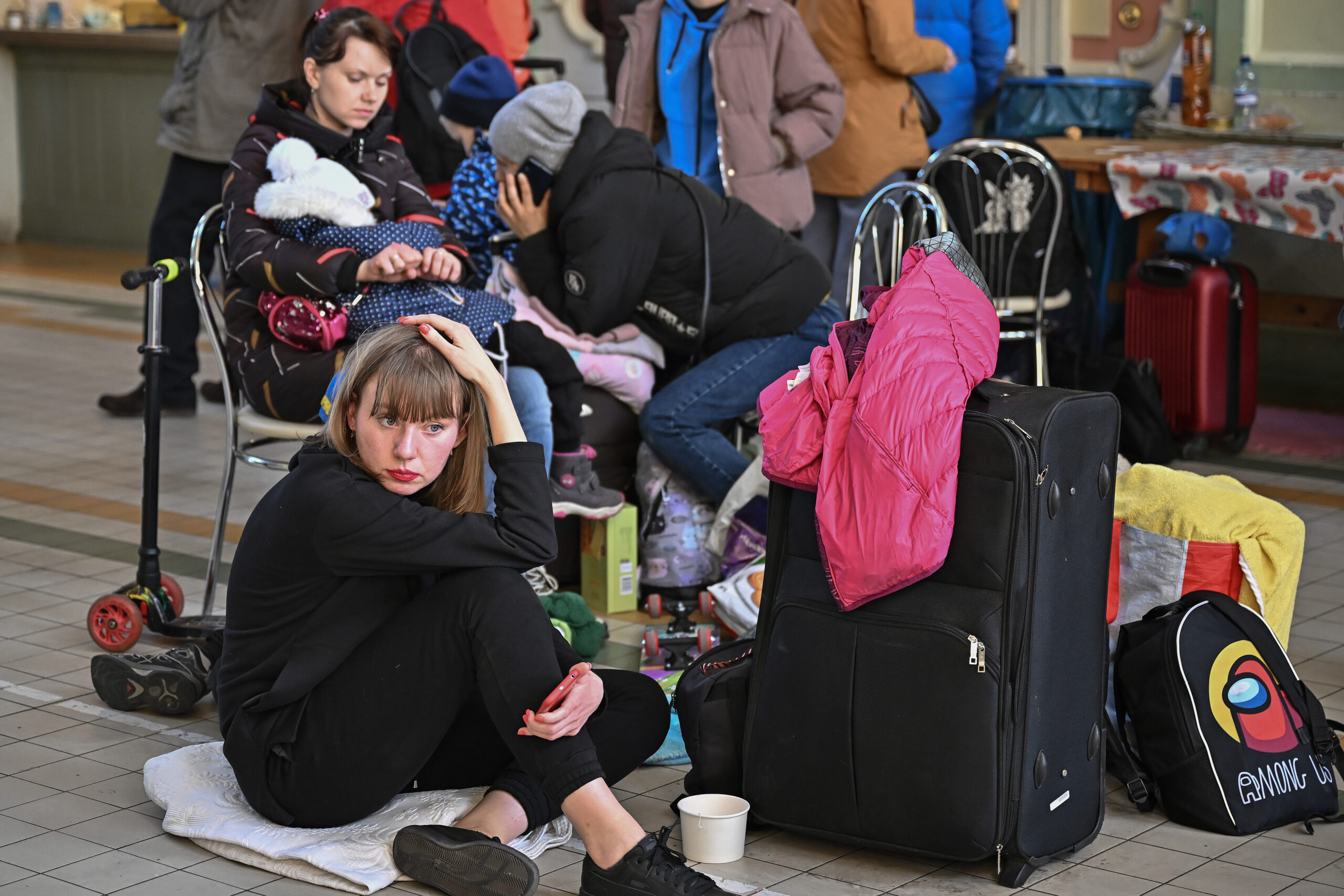 Refugees wait at a train station in Przemysl, Poland, before continuing on their journey from war-torn Ukraine on Wednesday. (Jeff J Mitchell/Getty Images)
By Matthew Kendrick

Supermajorities of adults in Europe’s five largest economies support the resettlement of Ukrainian refugees, but fewer would welcome Syrian and Afghan refugees, a new Morning Consult survey shows, just as a food crisis looks set to send people fleeing those regions too.

About 4 in 5 people in Germany, Spain and Italy support Ukrainians being resettled in their countries, and three-quarters in the United Kingdom and two-thirds in France say the same. But by at least double-digit margins, support for resettling refugees from Syria and Afghanistan falls shorter, with especially stark differences in Germany and France. 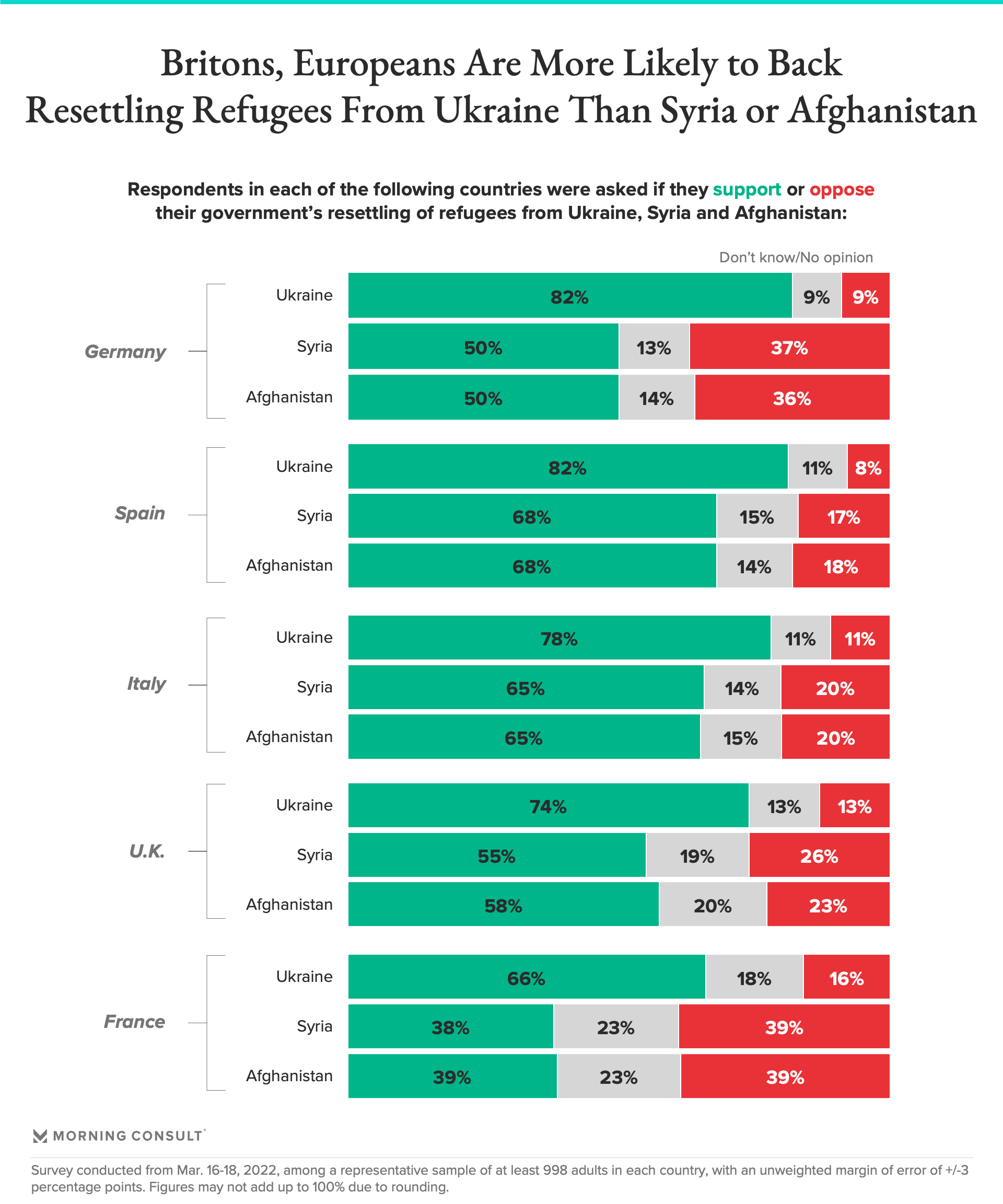 The March 16-18 surveys were conducted among at least 998 adults in each country, with an unweighted margin of error of plus or minus 3 percentage points.

Southern Europeans are notably more welcoming toward Syrians and Afghans, though, with around 2 in 3 Italians and Spaniards in support of resettlement, compared to just half of Germans and less than 40% of people in France, where next month’s presidential elections have been rocked by anti-immigrant campaigns from the far right.

Arie Kruglanski, a social psychologist at the University of Maryland who studies in- and out-group dynamics, said that the perceived “otherness” of Syrians and Afghans and associations of Islam with terrorism contribute to the difference.

“The Ukrainian refugees are similar to Europeans: They look the same, are Christian, are part and parcel of Europe and European traditions. Refugees from the Middle East are different in appearance, culture and religion,” Kruglanski said. “Humans have evolved to react with suspicion and aversion to otherness.”

But Kruglanski also pointed to the adage that the “enemy of my enemy is my friend” and said Ukrainians were seen as particularly heroic by many Europeans for suffering at the hands of Russian President Vladimir Putin, the “Tyrant of Europe.” And the survey data suggests it’s not all about skin color or culture.

When the question of race and ethnic origins of refugees is put in the abstract, fewer Europeans say they have no issue with resettling refugees with different backgrounds to themselves: 44% of French people support it, while 58% of Germans say the same.

That may be because there are also political considerations at play.

Images of Russian jets bombing Kharkiv make it easier to imagine the same happening to Krakow, Köln or Kent, whereas the intangible threats of hunger and political repression faced by Afghans and Syrians may not carry the same visceral threat in the minds of many Europeans.

“People make different calculations around their moral obligations as well as the political benefits of helping countries in their own neighborhood, especially when the aggressor is a common political foe,” said Natalia Banulescu-Bogdan, the associate director of the Washington-based Migration Policy Institute’s international program.

Meanwhile, whatever ordinary people think, their government’s policies are another thing.

“The true test,” said Osamah F. Khalil, the head of international relations at Syracuse University’s Maxwell School of Citizenship and Public Affairs, “is whether these attitudes will be reflected in humanitarian assistance on the ground and the resettlement policies adopted by Western European governments.”

Related: Europe Has Embraced Ukraine’s Struggle. But Without Long-Term Planning, It Could Become a Nightmare

Hunger will break through stone walls

The European response to the millions of Ukrainians seeking shelter has been both staggering in its generosity and because it is still not nearly enough.

Aside from the millions who have already left Ukraine, more than 6 million people have been internally displaced within the country. And as Russia appears unable to dislodge Ukraine’s military, leading it to instead terrorize civilians, the scope of the crisis is only just emerging.

But the war is also threatening to displace people thousands of miles away.

Ukraine and Russia together produce about a quarter of the world’s wheat, and the violent disruption to Ukraine’s planting season and global sanctions on Russia are already causing food shortages across the Middle East and Africa. Like the Ukrainians, many there may soon find themselves with no option but to set out abroad in hopes of a better future.

Egypt, the world’s largest wheat importer and the most populous country in the Middle East, is so concerned about the disruption to wheat prices that its government announced a $7 billion economic relief program and requested support from the International Monetary Fund.

The head of the U.N. World Food Programme, David Beasley, has also warned European governments to prepare for “hell on earth” if they ignore the food crises to their south and east — and that his organization is $8 billion short of what it needs to handle the crisis.

In Afghanistan, daily survival has already been a desperate struggle for millions of people for months, as a combination of Western sanctions and Taliban neglect led to a total collapse of food distribution systems and economic paralysis. Of the 38 million people living in Afghanistan, 95% don’t have enough food to eat, according to U.N. reports.

Regardless of Europeans’ hospitality for them, refugees from the Global South may well soon be on the heels of the Ukrainians. The question now is whether their governments have the foresight to plan for their arrival beforehand.

“Unless countries put in place systems now to anticipate and manage medium- and long-term integration needs,” said Banulescu-Bogdan, “we can expect tensions over things like overcrowding, allocation of scarce resources, and competition for jobs.”