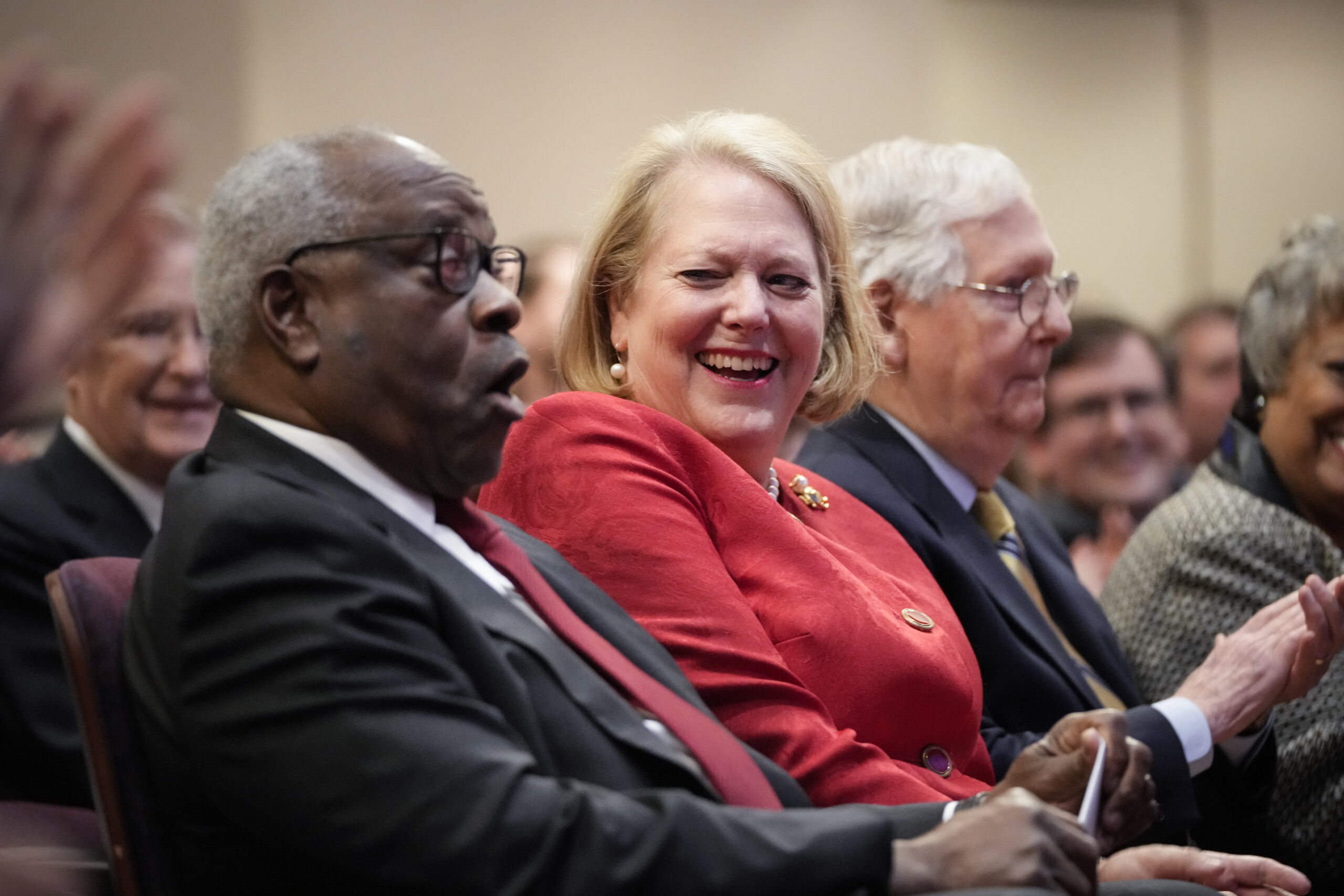 Supreme Court Justice Clarence Thomas sits with his wife and conservative activist Virginia Thomas while he waits to speak at the Heritage Foundation in Washington, D.C., in October 2021. (Drew Angerer/Getty Images)
By Eli Yokley

Supreme Court Justice Clarence Thomas is again facing scrutiny due to his wife, Ginni Thomas, a conservative activist who repeatedly pressured then-White House chief of staff Mark Meadows to try to overturn then-President Donald Trump’s loss in the 2020 election. Echoing calls from Democrats on Capitol Hill, a new Morning Consult/Politico survey found the majority of voters say the jurist should recuse himself from election-related cases.

Majority of Voters Say Thomas Should Recuse Himself From 2020 Cases

What voters say about Clarence Thomas

Ginni Thomas’ text messages were revealed amid the ongoing House investigation into the events surrounding the Jan. 6, 2021, attack on the Capitol by a mob of Trump supporters hoping to overturn the 45th president’s 2020 loss. Ginni Thomas, whose participation in the tea party movement of the early 2010s led to similar ethical questions for her husband, has said she was a participant in a Jan. 6 rally but did not participate in the Capitol riot.

A number of Democratic officials have used Ginni Thomas’ actions to pressure Clarence Thomas to recuse himself from pending cases involving the Capitol attack and the 2020 election, but he faces no obligation to do so.

About one-fifth of voters (22%) said they had seen, read or heard “a lot” about the reports about Ginni Thomas, slightly more than the 18% who said the same about news that a federal judge said Trump “more likely than not” committed federal crimes in his attempts to block the count of Electoral College votes.

Seven in 10 voters (69%) agree with the judge that it’s a crime for elected officials to attempt to overturn the results of an American election, including 85% of Democrats and 53% of Republicans. A similar share of all voters (68%), Democrats (88%) and Republicans (51%) say the Justice Department should bring legal action against such officials.

But Trump gets more slack from the electorate when it comes to his latest request for foreign help in finding damaging information on President Joe Biden’s son.

Voters on Trump’s plea to Putin