Report Preview: Now Is the Time to Prepare for a Recession 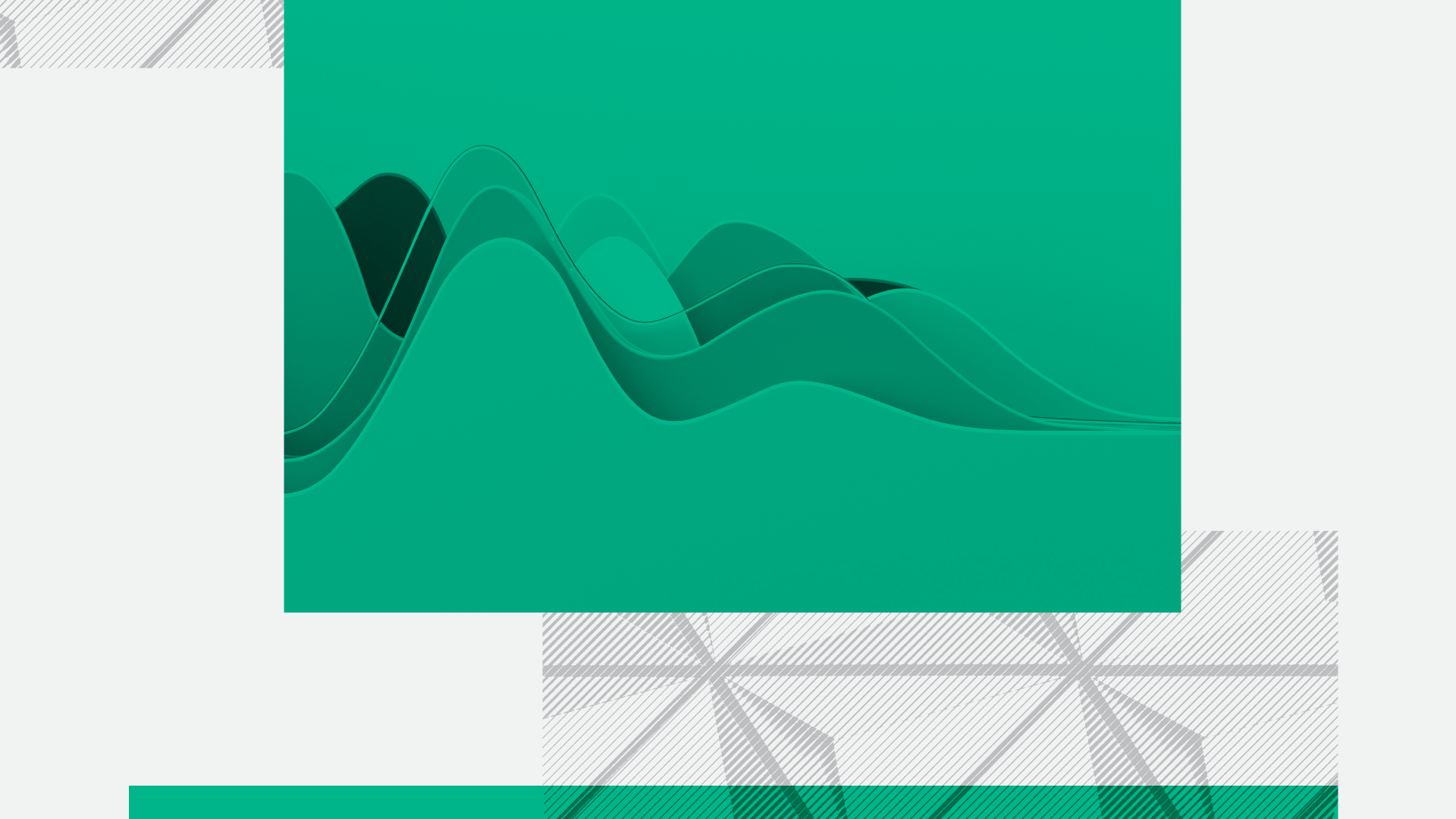 This is a preview of Morning Consult’s monthly U.S. Economic Outlook report, which provides an integrated assessment of the strength of U.S. consumers, workers and households. Download the full report here.

After consecutive months of the highest inflation in 40 years, the Federal Reserve began raising interest rates to fight inflation during its mid-March meeting. The Federal Open Market Committee (FOMC) raised the Federal Funds Target Range by 25 basis points, starting the process of reversing the highly accommodative interest rate policy in effect since the onset of the pandemic in March 2020.

Despite the interest rate increase in March, there is growing evidence that the Fed is going to need to act more aggressively to curb inflation. Since Chairman Jerome Powell’s March 16 press conference, a chorus of FOMC members have spoken in support of 50-basis-point hikes at multiple upcoming meetings, sending financial markets to price in upwards of an additional 200 basis points by year end. 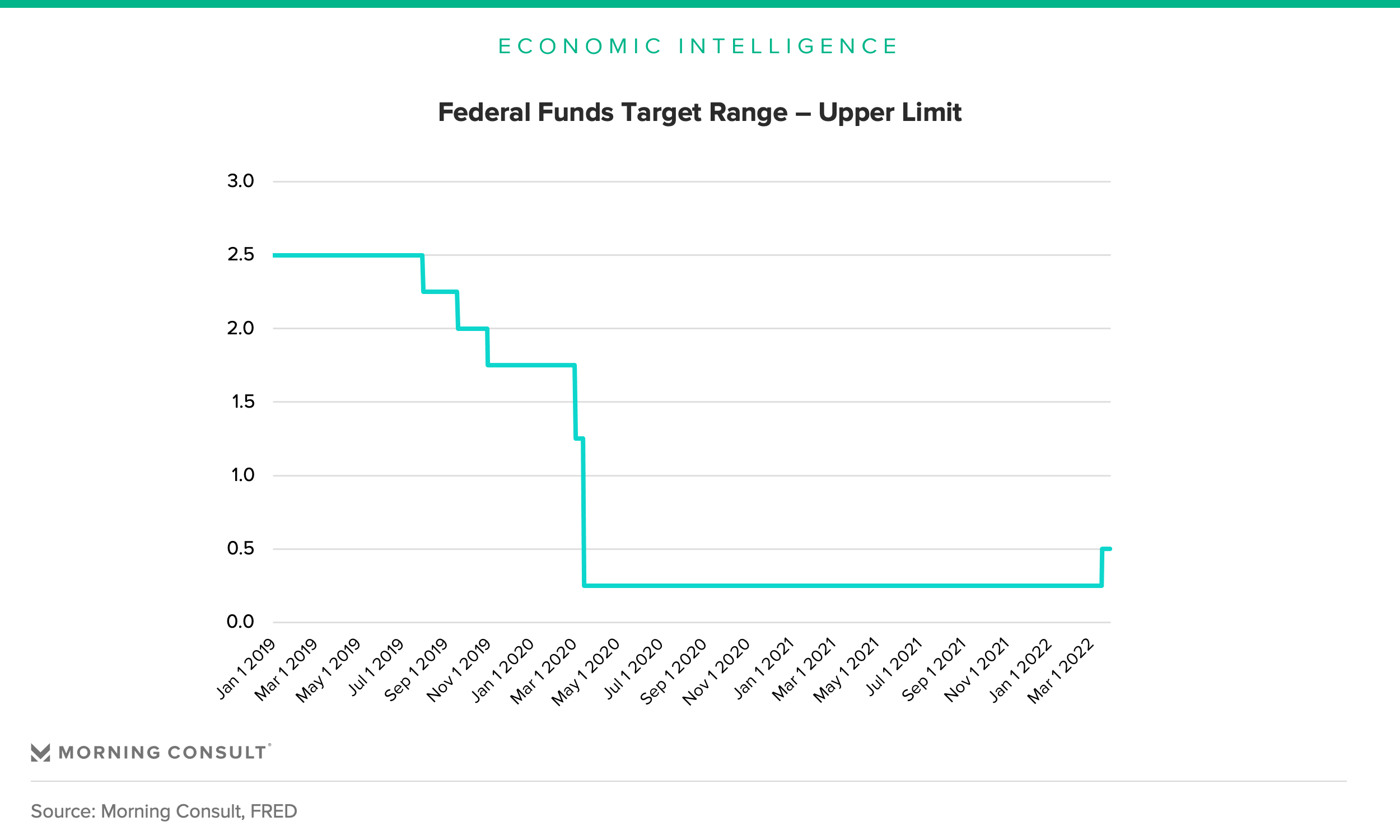 It’s too early to know if the Federal Reserve can successfully achieve a soft landing. It will take months for the full impact of higher borrowing costs on economic activity to be felt, and borrowing costs are projected to rise throughout 2022, making 2023 the earliest potential read of the Federal Reserve’s success. In the meantime, factors other than interest rates — such as a war-torn Europe, sluggish confidence or high inflation — may push the economy into recession this year before the Federal Reserve raises rates to its intended target. 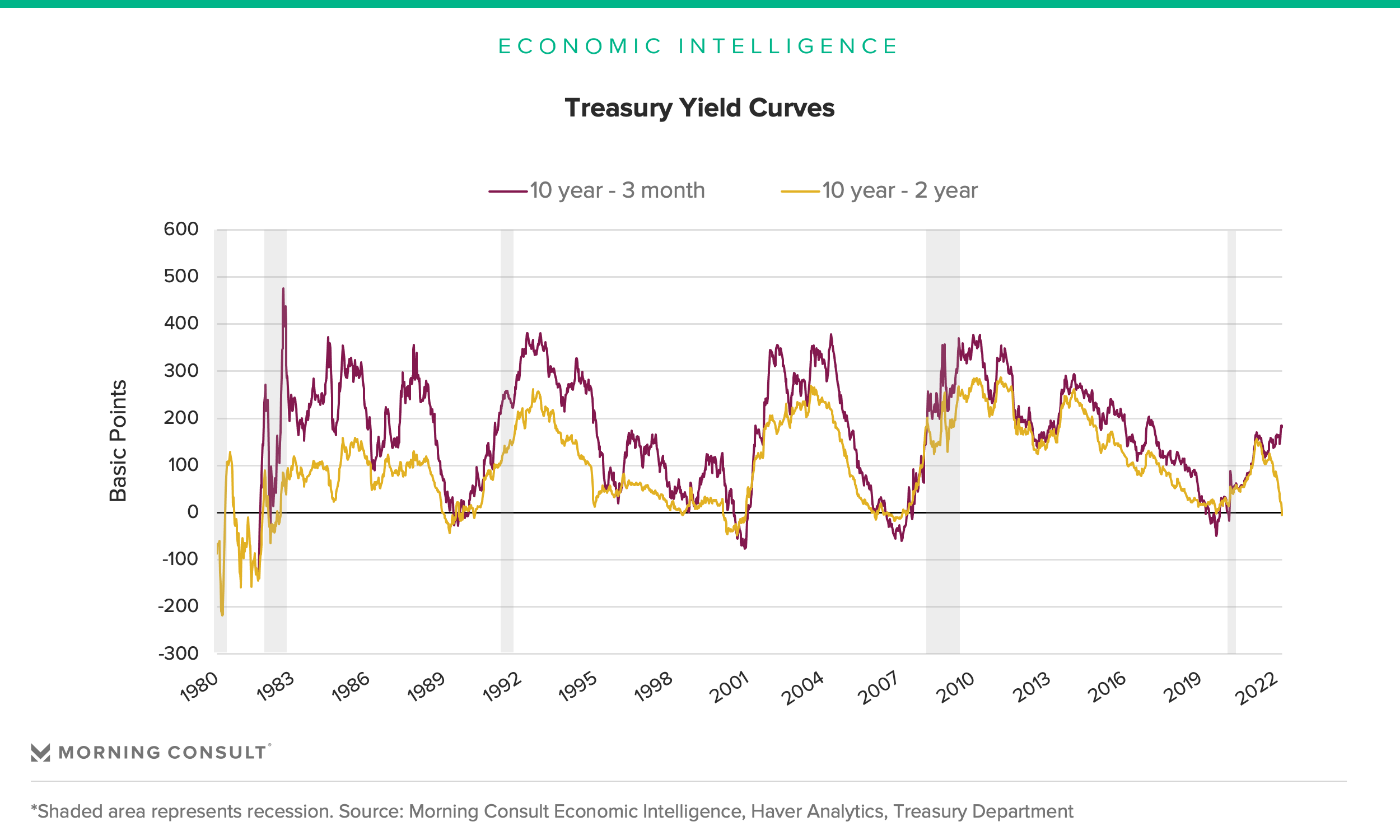 In order for the Federal Reserve to succeed, it needs to maintain credibility with financial markets. When markets think the economy is headed for a recession, the economy tends to experience a recession.

As rate hikes have increasingly been priced into the markets, the spreads between various Treasury market yields have diverged to tell different stories about the future path of the economy.

On the one hand, a flattening of the spread between 2-year and 10-year Treasury yields has caught the attention of financial markets and economists alike who often cite this occurrence as a reliable signal of an impending recession: When the yield curve inverts, it has traditionally signaled that investors have lost confidence in the economy’s growth outlook.

Others point out that the spread between the 3-month and 10-year yields has widened, suggesting a very different outcome — one where investors anticipate some combination of stronger growth, higher inflation and higher interest rates.

Which path the economy is heading for will soon be resolved by incoming economic data — we’ll be closely watching the extent to which the pace of hiring, consumer spending, business investment and manufacturing growth slow.

Elevated gas prices and widespread supply constraints complicate the Federal Reserve’s objective of achieving a soft landing. Increases in interest rates curb inflation by limiting demand, but they are less well suited to addressing prices of nondiscretionary purchases driven by inadequate supply, such as gas. Thus, even as interest rates increase, the most recent surge in the commodity complex promises to pressure end-consumer goods and services prices for some time. 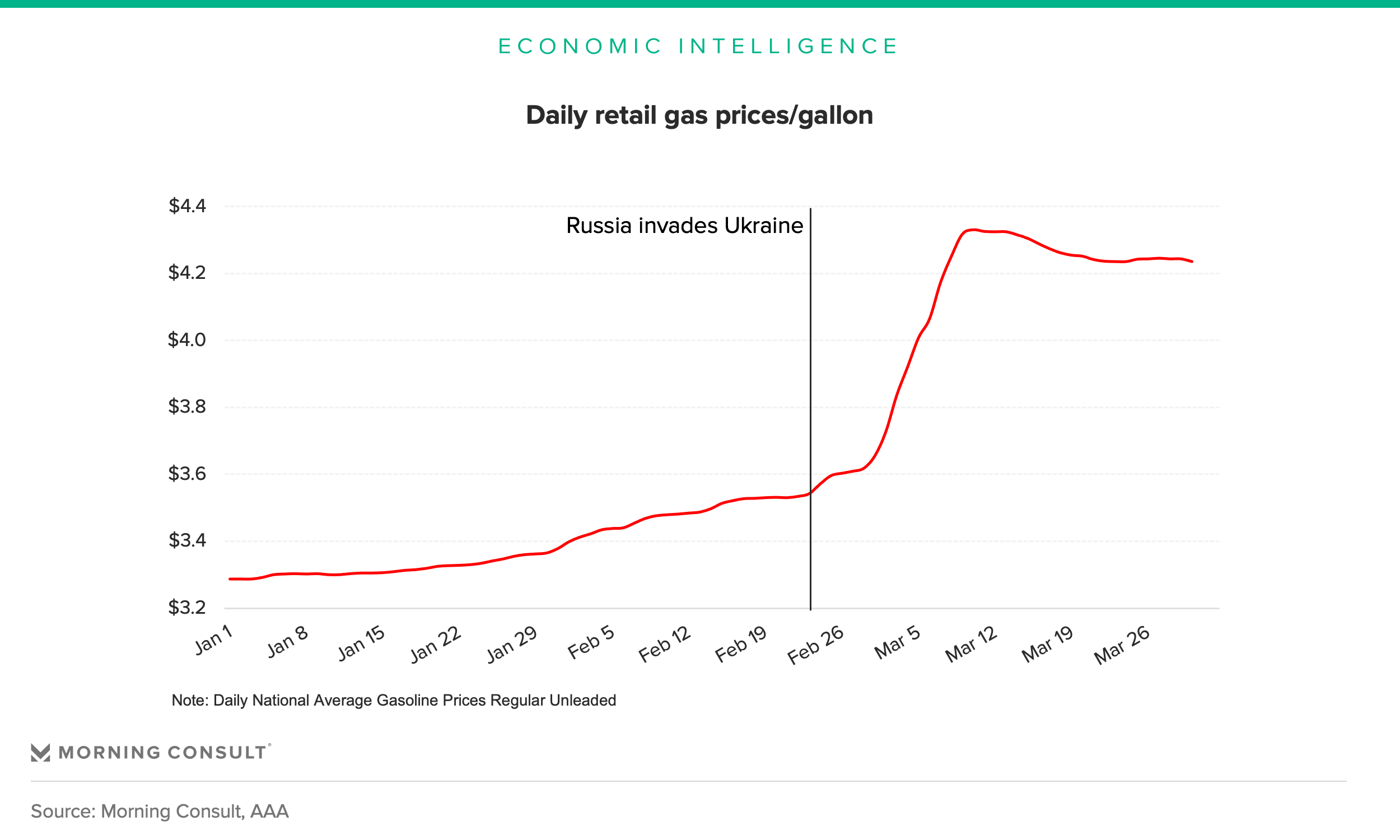 While falling below the March high, retail gas prices have stabilized at roughly $4.20 per gallon, up by $0.63 versus a month ago, $1.38 versus last year and $2.22 versus two years ago. In other words, the consumer has been struggling not only with the degree to which prices for this one category have risen, but also the duration of which it has remained high. 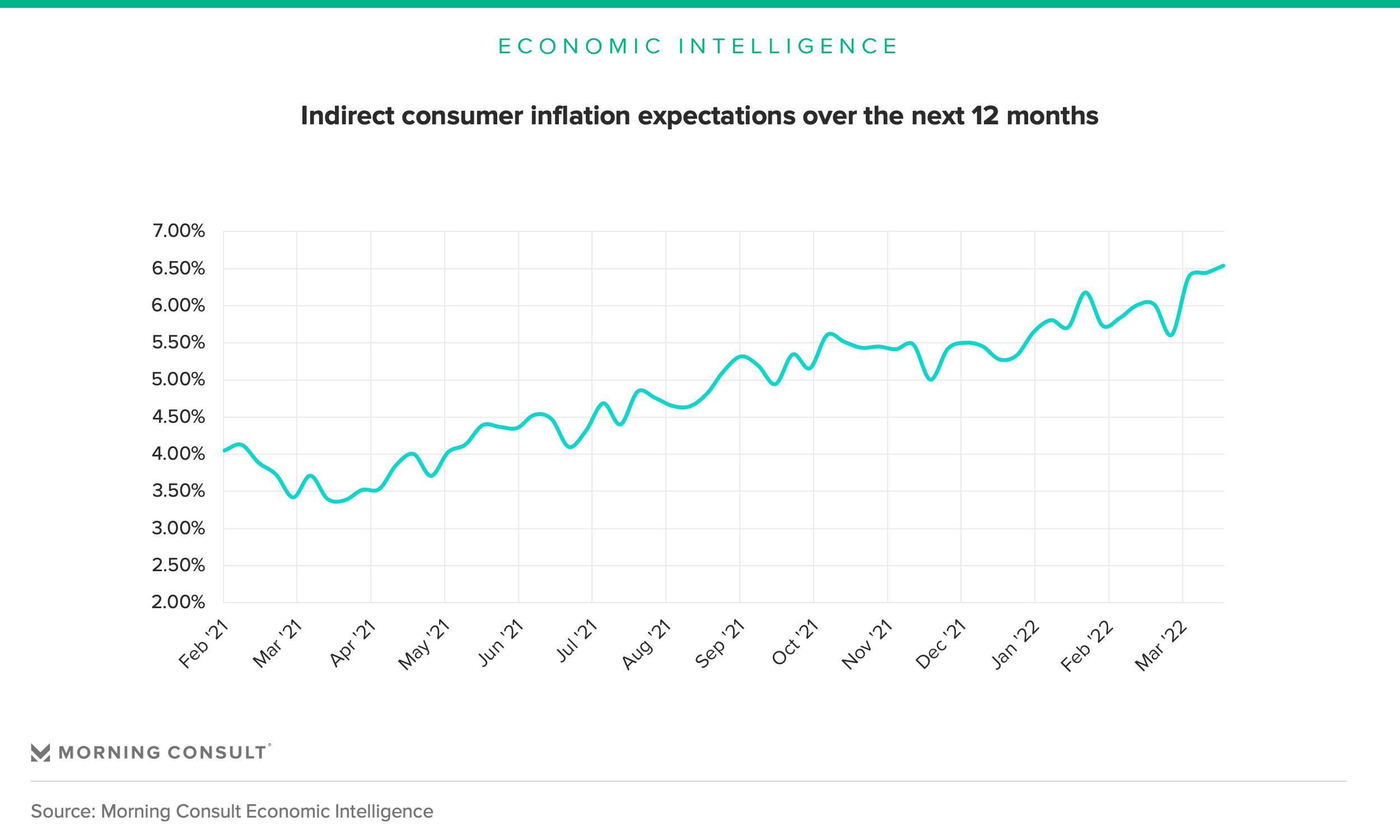 The strength of labor markets offers the strongest case for optimism. As of March 2022, the U.S. economy has averaged more than 562,000 net new jobs per month since January 2021, significantly above pre-pandemic trends.

Robust jobs growth continues to provide workers with money to spend and to give companies the workers they need to operate and expand. As noted in last month’s report, barring direct U.S. or NATO intervention, the Ukraine war is unlikely to materially influence U.S. jobs growth due to the relatively limited trading relationships between the United States and Russia and the United States and Ukraine.

In February, there were roughly 11.3 million job openings and only 6.3 million unemployed, with the ratio of unemployed persons per opening in the United States falling well below pre-pandemic levels. In this extremely tight labor market, the prospect of a higher wage is drawing many employed workers to also look at switching jobs. During the week ended March 26, 18.5% of employed adults were actively looking for a new job (see slide 32). 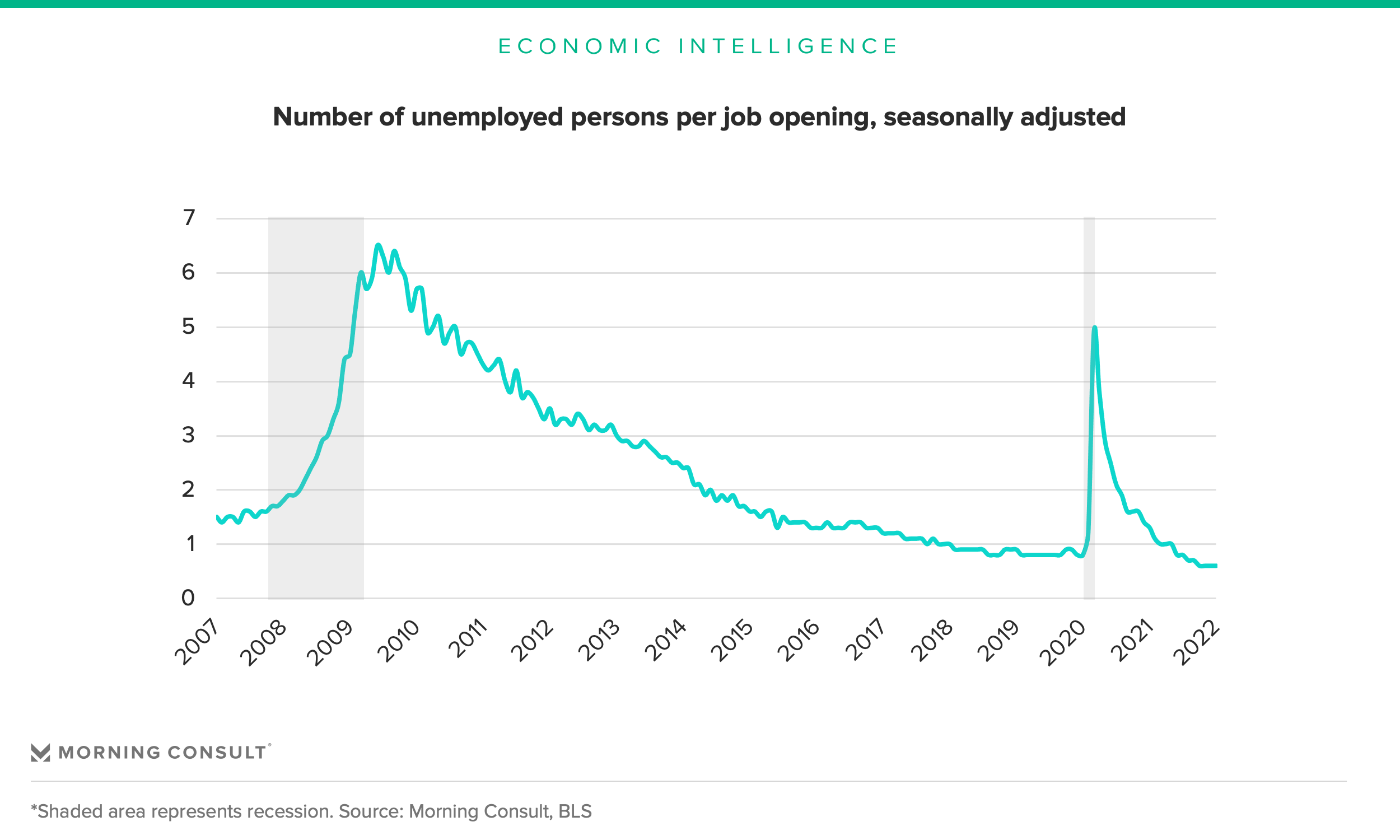 While the current, unique circumstances of U.S. labor markets conceptually allow slowing demand for workers along with simultaneous jobs growth, the actual outcome remains far from certain. For example, weakened labor demand may slow wage growth, disincentivizing workers from returning to work, thereby exacerbating labor supply limitations. The Federal Reserve also faces daunting implementation risks: Turning down the heat just enough to slow jobs growth from a boil to a simmer is difficult, and there’s a risk that it goes too far.

Now is the time to prepare

Given the unique circumstances that the Federal Reserve must navigate, uncertainty and volatility are likely to characterize the U.S. economy as it seeks to achieve a soft landing. Since inflation is largely being driven by commodity prices and supply constraints, interest rate increases will be less helpful curbing inflation. On the other hand, since jobs growth is being held back by labor supply, it is possible that interest rate increases will not harm jobs growth as much as they have in the past.

Not only does the Federal Reserve need to maintain credibility with financial markets, but it also needs to successfully contend with inflationary pressures on commodity prices and supply chain disruptions, both of which are outside its control. Finally, the ability of the Federal Reserve to engineer a soft landing also depends on its ability to increase interest rates without materially increasing unemployment.

The degree to which the economy can digest higher interest rates without falling into a recession will be bourn in the economic data over the coming months. The extent to which growth in hiring, investment and spending among other indicators slow will reveal how well the Federal Reserve has managed to engineer a soft landing.

Even if the United States avoids a recession, the risk of recession is material enough to warrant businesses devoting additional time and resources to scenario planning. If the United States experiences a recession, how will it affect businesses and industries? If the Federal Reserve is unable to curb inflation, how will persistently elevated inflation impact businesses’ customers across different market segments? In this sense, the debate regarding the Federal Reserve’s ability to achieve a soft landing misses a critical conclusion, namely that businesses have an obligation to start preparing for a hard landing.