Companies Are Set to Spend Billions on the Metaverse in the Next Decade. These Are the Groups They Should Target

Into the Metaverse: What Interests and Worries Consumers About the New VR Venture

A new special report from Morning Consult explores the public’s interest in and concerns around the metaverse, as Meta Platforms Inc. and others ramp up work on the virtual reality platform. The data is drawn from a survey of 4,420 U.S. adults. Other stories in the series: In the Metaverse, Live Concerts Hold More Appeal Than Live Sports and Shopping | Nothing Concerns the Public More About the Metaverse Than the Misuse of Their Personal Data | All metaverse coverage

Tech companies are pumping billions of dollars into the metaverse in a public and much-hyped bid to move their offerings and users into an immersive virtual world.

A Morning Consult survey indicates that the overall public appears reluctant to join the metaverse, but Meta Platforms Inc. and other companies investing in the virtual world may take heart from the interest from millennials and Generation Z, as well as Black and Hispanic adults.

Among all U.S. adults, 36% said they were interested in the metaverse, and slightly lower shares said they were interested in the offerings in the space by Meta, the company formerly known as Facebook that has pledged to invest billions to help develop it and changed its name to reflect its shifted focus from social media to the metaverse. Interest levels in the metaverse among the heaviest internet users — those who said they spend at least 24 hours a week using the internet — were in line with the general public.

In a November 2021 Morning Consult survey, 32% of adults said they were interested in the metaverse, showing slight movement in its favor over the course of several months. 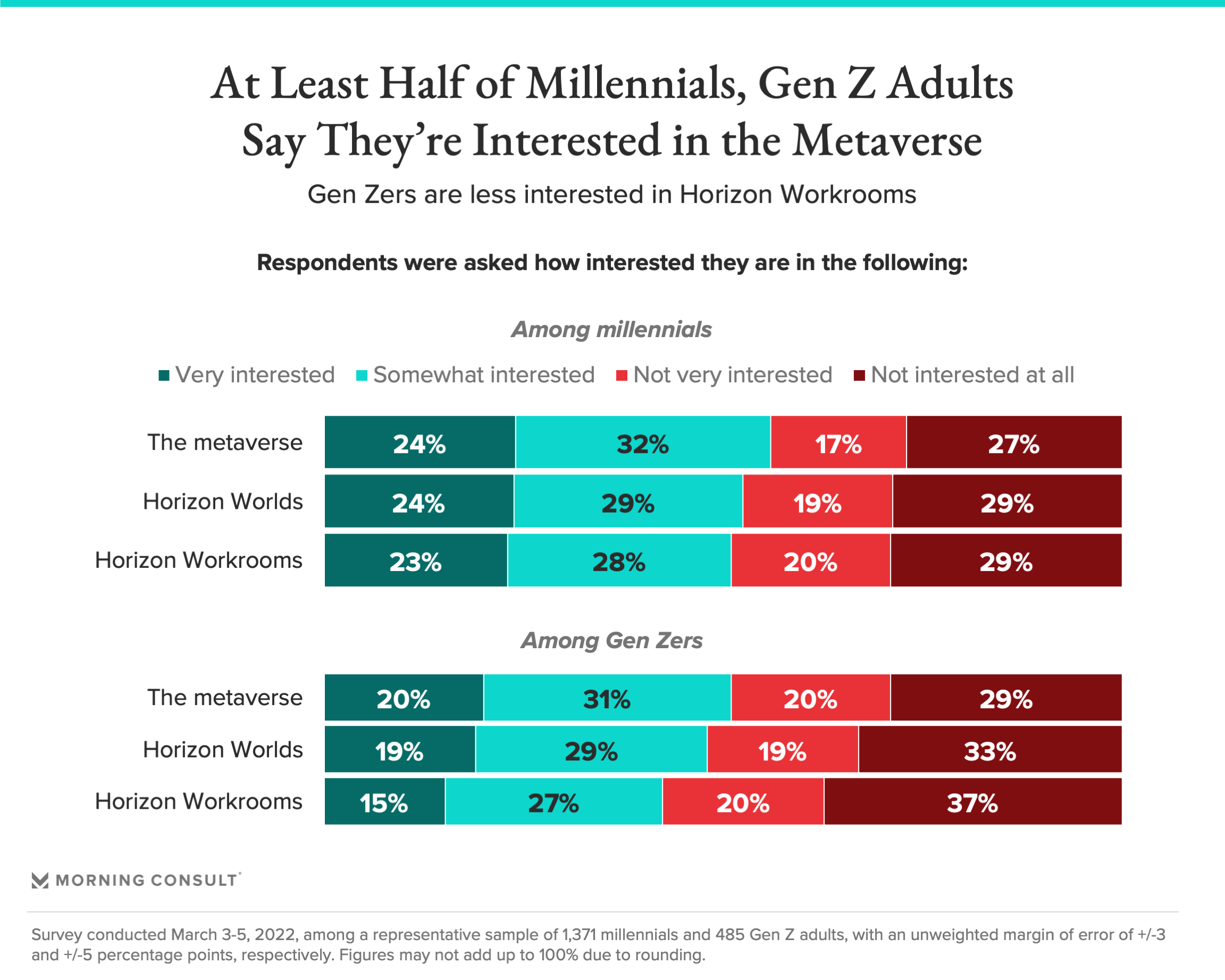 For tech companies looking to build out the metaverse, the larger interest among younger generations could be a source of optimism as they look to attract new users, especially with Meta’s user base aging and declining.

“In the case of Facebook, for example, you see with Meta it’s a great way to rebrand towards a younger generation, particularly as Facebook has kind of fallen out of touch with younger generations,” said Juan Londoño, an augmented and virtual reality policy analyst at the Information Technology and Innovation Foundation.

The younger generations have shown an interest in the technology needed for the metaverse — like virtual reality headsets and controllers — in previous research.

A 2018 report from child education nonprofit Common Sense Media and Stanford University’s Virtual Human Interaction Lab found that while only 21% of parents said they had VR equipment, 64% of parents with children ages 8 to 17 who use VR were asked to buy the equipment by their children.

Londoño said a focus on those typically younger consumers could make the metaverse an attractive proposition for companies looking to keep their user base strong.

Meanwhile, equal shares of Black and Hispanic adults (52%) said they are interested in entering the metaverse, far ahead of the 34% of white people who said the same. Analysts at the Pew Research Center found in 2019 that Black and Hispanic people tend to skew younger than white people on average, while a separate study found Hispanics in particular are more likely to use social media.

About Half of Hispanic, Black Adults Interested in Entering Metaverse
Just over 1 in 3 white people expressed the same sentiment

Respondents were asked how interested they are in using the metaverse

Men are much more likely than women to be interested in entering the metaverse, 46% to 28%. Separately, 70% of women said their personal safety in the metaverse is a major or minor concern, while 73% said they are worried about online abuse and 64% said they are concerned about sexual harassment.

Men Are More Interested in the Metaverse Than Women
Nearly half of men said they were interested, compared to roughly 3 in 10 women

Respondents were asked how interested they are in using the metaverse

Concerns about real-world issues that women face have led some elected officials to question how laws will be enforced in the metaverse and whether people’s definition of consumer privacy will be the same in the metaverse as it is in real life.

“Can you be assaulted in the metaverse? Can your avatar be assaulted? I think the answer is probably yes, but what does that look like in terms of the law? We’re going to have a whole range of those kinds of conversations,” Rep. Jake Auchincloss (D-Mass.) said in a speech at the State of the Net conference on Feb. 28 in Washington, D.C.

Despite outreach, companies have a ways to go before wider awareness

When it comes to general public awareness, however, companies have a long way to go to widespread awareness of the metaverse. Among all consumers, 36% said they had heard “a lot” or “some” about the metaverse, while fewer than 3 in 10 said the same about Meta’s initiatives.

2 in 5 Adults Have Heard ‘Nothing at All’ About the Metaverse
And another quarter say they haven’t heard much, despite publicity and funding push from Facebook parent Meta Platforms Inc.

Respondents were asked how much they have seen, read or heard about the following:

But there is evidence that some aspects of the metaverse are entering the public consciousness. Meta’s Oculus app was downloaded approximately 2 million times globally in the days after Christmas, and became the most popular app on Apple Inc.’s App Store and the most popular free app on Alphabet Inc.’s Google Play Store in the United States over the holiday, according to data from Sensor Tower.

And roughly a third of the public said it was interested in Meta’s Horizon Worlds and Workrooms platforms, shares that are roughly on par with interest in the metaverse generally.

About a Third of the Public Is Interested in the Metaverse, Horizon Offerings

Respondents were asked how interested they are in the following:

Survey conducted March 3-5, 2022, among a representative sample of 4,420 U.S. adults, with an unweighted margin of error of +/-1 percentage point. Figures may not add up to 100% due to rounding.
Related: In the Metaverse, Live Concerts Hold More Appeal Than Live Sports and Shopping

One metric of success: ‘social acceptance’

Meta CEO Mark Zuckerberg acknowledged it will take several years for a functioning metaverse, in what he called “one of the most interesting challenges of the next decade” during an on-stage interview at the South by Southwest festival.

In the meantime, Zuckerberg said Meta will prioritize developing its hardware, and promised during the company’s fourth-quarter earnings call that they would deliver a “high-end virtual reality headset” by year’s end. The company is also making progress on Project Nazare, the company’s augmented reality glasses, he said. Meta did not respond to requests for further comment.

Despite Meta’s enthusiasm, others are not convinced. Former Nintendo of America Inc. President and Chief Operating Officer Reggie Fils-Aimé said at SXSW that he is skeptical about Meta’s vision for the metaverse, as the company is mostly a “fast follower of people’s ideas.”

In the meantime, Londoño said a crucial way to measure if the metaverse and its associated hardware is making headway in the public consciousness is to measure user count, as companies are prioritizing growth and adoption, as well as sales of their hardware. Then in time it will be useful to measure how active those user accounts are and how much time people spend in the metaverse.

And while it may be more difficult to measure, Londoño said social acceptance of the metaverse will also be worth monitoring.

“If you say, ‘Yeah, I’ll just meet you on this app later, on VR,’ and you’re not going to be looked at like a weirdo, a thing like that has to be big,” he said. “That’s social adoption, and social acceptance for the technologies. It’s a difficult metric, but it’s a metric for success.”

Related: Nothing Concerns the Public More About the Metaverse Than the Misuse of Their Personal Data
Gen Z Metaverse Millennials