Seven months ahead of the World Cup, just 16% of U.S. adults say they have heard "a lot" or "some" about soccer's biggest event 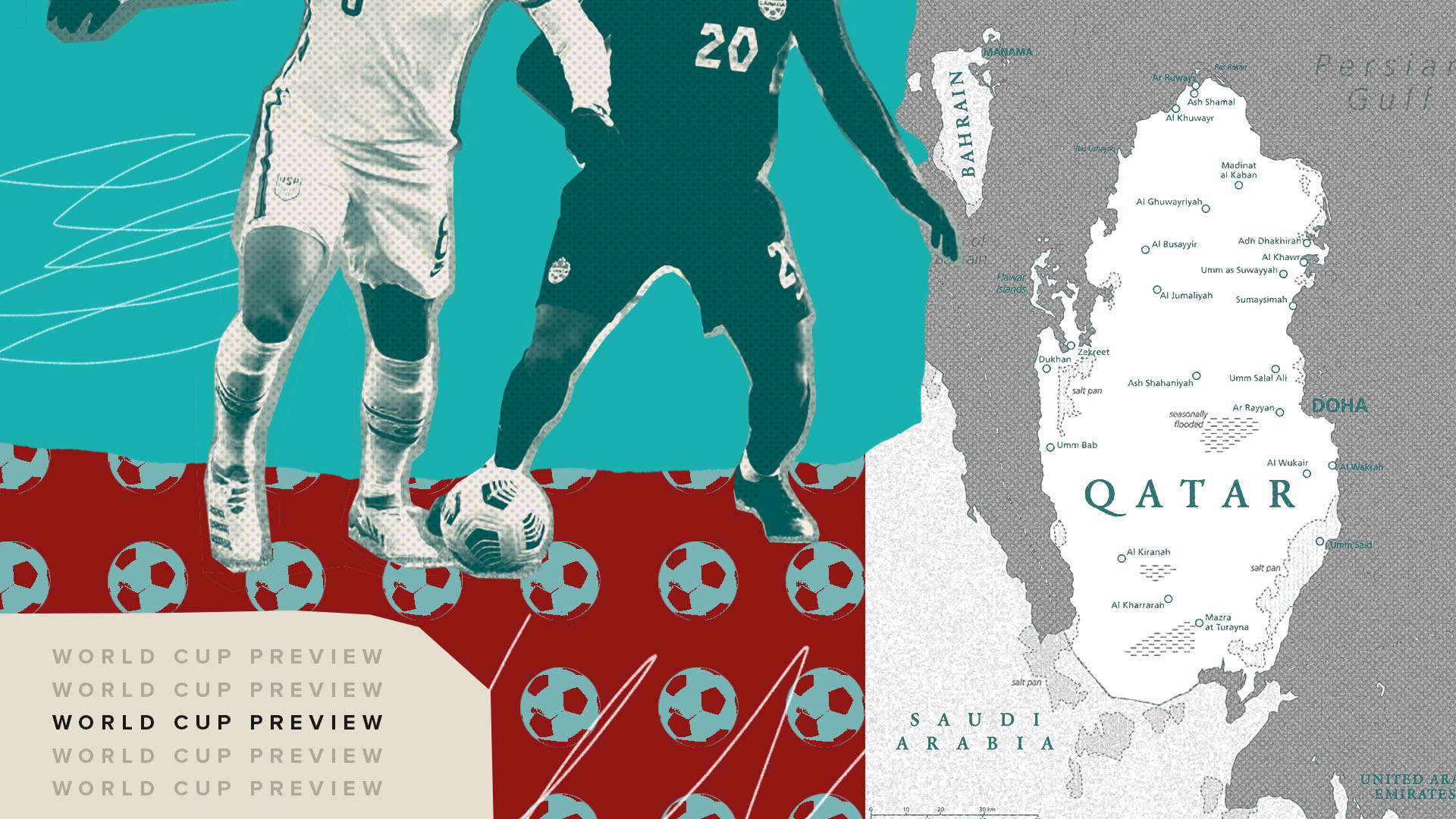 The 2022 World Cup in Qatar will be the first World Cup played in November and December due to weather considerations, just one of the unique challenges facing this year's anticipated event. (Getty Images / Morning Consult artwork by Anna Davis)
By Alex Silverman

Related stories: Ahead of the 2022 World Cup, Soccer Is Still America’s ‘Sport of the Future’ | How Blue-Chip Sponsors Are Approaching the Very Messy Qatar World Cup

Following a crushing failure to qualify in 2018, the U.S. men’s national team’s qualification for the 2022 FIFA World Cup in Qatar came as a huge relief to everyone invested in the growth of soccer in the United States. Still, the hard work for entities like U.S. Soccer, sponsors and World Cup broadcasters Fox and Telemundo to build interest in the event is just beginning.

Early signs from new Morning Consult research indicate that the cup, which begins Nov. 21, isn’t on many Americans’ radar yet. In a survey conducted in the days following the United States’ March 30 qualification,16 percent of U.S. adults said they had seen, read or heard “a lot” or “some” information about the World Cup, which includes 29 percent of self-identified casual soccer fans.

“The avid fans will be watching, but what moves the needle is the casual fan,” said Tag Garson, senior vice president of properties and head of global media at Wasserman Media Group. “How much can the networks, the folks at FIFA and U.S. Soccer — and CONCACAF for that matter — reach the casual fan to bring them into the tent?”

About 1 in 5 respondents (21 percent) said they would likely watch “a lot” or “some” of the tournament, including 45 percent of casual soccer fans, though previous research for Olympic Games and Super Bowls suggests the share who say afterwards that they tuned in will be lower.

Respondents were asked how much of the 2022 FIFA World Cup they plan to watch in person, on TV or via streaming

Survey conducted April 1-4, 2022, among a representative sample of 2,210 U.S. adults, with an unweighted margin of error of +/-2 percentage points.

Just having the United States back in the mix should ensure a viewership increase from 2018, when Fox and Telemundo averaged just over 5 million viewers per game, down 37 percent from 2014 and 11 percent from 2010.

*The United States did not qualify for the 2018 World Cup in Russia.
Source: Sports Media Watch

Still, an array of unprecedented variables makes it difficult to forecast how effective this World Cup will be in capturing America’s attention.

Qatar World Cup will be unlike any before it

In addition to being the first World Cup held in the Middle East, Qatar 2022 will also be the first World Cup played from late November to mid-December, an adaptation to mitigate the impact of the host country’s oppressively high temperatures during the event’s typical summer timeframe.

“It’s not just the fact that it’s now taking place in a new venue in a different time zone that’s hours ahead,” Garson said, “but also that there’s so much competition for viewers in the sports marketplace at that time of year. The NFL, NBA, NHL and college football will all be in the thick of their respective seasons when the World Cup starts.

While all three of the United States’ group stage games are scheduled for 2 p.m. ET, other game days in Qatar will begin at 5 a.m. ET, while most Americans are still sleeping.

David Wright, chief commercial officer for U.S. Soccer, acknowledged the challenges associated with the crowded sports calendar and time difference, but believes it also presents an opportunity for its English-language broadcast partner, Fox Sports, to promote the World Cup during its coverage of other sports, which includes the NFL.

“The fact that we’re going to have a game against England on Black Friday is an unbelievable promotional window for our game and will allow our sport to tap into an incredibly broad audience,” Wright said. “That gives us an opportunity to engage in meaningful ways and, hopefully, drive increased levels of fandom.”

A Fox spokesperson said the network isn’t yet ready to share promotional plans for the World Cup, while Spanish-language broadcaster Telemundo did not respond to a request for comment.

But the competition for viewers is just the start of it. There are other, significant controversies specific to Qatar’s hosting of the event, including concerns about the treatment of workers building the infrastructure and the illegality of homosexuality in the country, that each have the potential to sour potential viewers on the event. Garson suggested ongoing geopolitical turmoil could also steal attention from the World Cup.

“The consumer who otherwise may have said ‘let me look into this’ may still be paying attention to their morning news versus what’s taking place at the World Cup,” Garson said.

As for building buzz between now and November, Wright said U.S. Soccer, its sponsors, MLS and the second-tier USL, Fox, Telemundo and even ESPN, which doesn’t own media rights for the event, will all play a role in what he called a promotional engine “unlike any we’ve seen in a long time.”

The federation’s focus will be on introducing the public to a young American team that is completely different from the one that last competed on the world stage in 2014.

In another survey conducted earlier this month, less than 1 in 4 U.S. adults (23 percent) indicated that they are familiar with Christian Pulisic, the team’s 23-year-old star striker who plays club soccer for Premier League powerhouse Chelsea FC. Among self-characterized casual soccer fans, 38 percent said they had heard of the Hershey, Pa., native.

“Moments like these really serve as launchpads for telling the players’ stories and creating those player brands that are so critically important,” Wright said. “We’ve got a really dynamic roster that the core fan knows really well. By speaking to the casual fan, there’s an area of opportunity to tell those stories.”

Wright didn’t offer details on forthcoming promotional initiatives but said to expect a “crescendo” over the back half of the year culminating with the start of the tournament in November.

He also pointed to the Qatar World Cup as the start of a decade of soccer milestones for Americans to latch onto, calling it “a bridge” to the 2026 World Cup in North America, the 2028 Summer Olympics in Los Angeles and, if all goes well, a 2031 Women’s World Cup on home soil.

“There’s a 10-year period, unlike any 10-year period before, which gives us a lot of optimism that the growth is not slowing down,” Wright said. “If anything, it’s only picking up.”